Will had a really bad night, and I woke up very concerned about whether we should be riding or not. It was a beautiful day, warm and sunny, and although it wasn’t going to be the most scenic or enjoyable of rides, Sydney is a real monster of a city, and almost joins up with Wollongong. It was going to be busy traffic and motorways. After breakfast, Will promised me he was okay to ride, so we packed up and headed north on the A1.

As expected, it wasn’t all that exciting, and getting around Wollongong was a bit messy and confusing, but we got through, or around, or whatever, and got ourselves onto the Lawrence Hargrave Drive, which winds its way along the coast, and offered us the only real pleasant riding of the day. It also had the Sea Cliff Bridge, which is used for lots of car ads and stuff. Alan had mentioned it to us, so we thought it would be cool to ride it. It was a really nice section of the ride, and we stopped in Austinmer to have a break and get the GoPro happening. Have to capture this bit for sure. 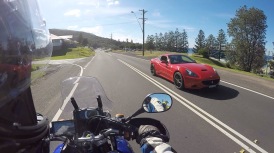 We checked the GoPro, and the memory card was full, just before we got onto the Sea Cliff Bridge. What a bummer. But you can see it way down there. But we were definitely not the only ones out here enjoying this great little ride.

Well, it wasn’t as long as we had hoped, but still awesome, and then after it, we came to Bald Hill, which was a fantastic surprise, offering us the best view back along the coast we’d just ridden. It really was a “Wow” spot. To top it off, we could now ride through the Royal National Park and enjoy the forest and quiet traffic, before we reach the outskirts of the big city, and the crazy traffic. 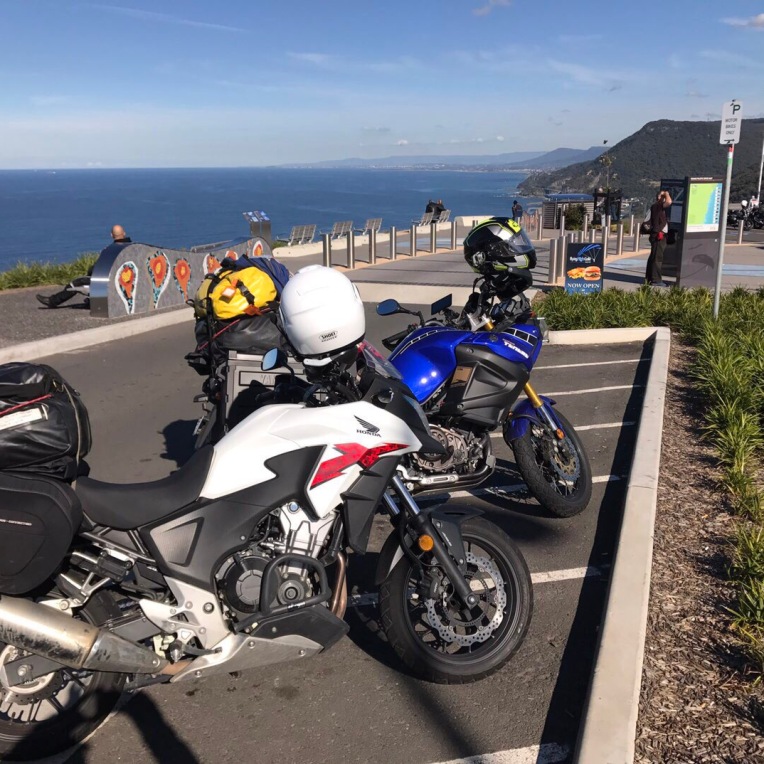 Thank god for that little bit of peace and quiet, because when we came out of the national park, we were on the motorways, in the busy traffic, and trying to navigate our way to Drummoyne, which is fairly close to the city centre. As we had no idea where we should be going, or how to get there, we had to trust the Stupid GPS, and hope for the best. We had one last stop to charge up and eat, before pushing through the horrible traffic to cousin Liz’s place.

Somehow, we made it, with one minor close call, and as we took some deep breaths on the footpath Liz came out to greet us and confirm we’d arrived at the right place. Will was fading fast now, but happy to have got through the ride. Liz was happy to see us, and we got sorted and met my little second cousin, Belle, who is six months old. Very, very, cute, and we were both captivated immediately.

So good to see Liz again, and an absolute joy to meet Belle. Thank you for having us.

So Will has our bikes booked into Bikebiz, in Parramatta, so we’ll take them there in the morning, and they’ll keep them for two days to service and repair, and add some crash bars for Will. Liz and her husband Hutch (who is away with work for a couple of days), have kindly allowed us to stay in there lower story room, and do what we need to. It is lovely of them, considering we are both a bit unwell.

Another fine day, thank goodness, and we rode the bikes through the morning traffic (not quite peak hour yet) and somehow found Bikebiz. Craig looked after us, and had everything in hand, so he offered us a loan bike, to get around while we wait for the work to be done. Wow, that is pretty cool. The lot is full of really cool bikes, big ones and small ones, which one is our loaner? Oh, dear, it’s a smaller one! A Yamaha MT7. Good sporty bike for around the city, but what about with two fat arses on it?

Our two bikes think they are equal to one car…..and just check out the tiny pillion seat on that MT7……it’s like, tiny!

Well the ride home was a bit nerve racking, and the traffic was a bit worse, but we got back to Liz’s, and pretty much parked up for the rest of the day. The glory of having a small baby, is they sleep lots, and you’re allowed to sit and relax while you wait for them to wake up, eat, play, poop and sleep some more. Just what Will needs right now.

Wednesday morning, Will was getting worse, so we decided it was time to see a doctor. You don’t need to get more than a cold while travelling. Poor Will, he was not going well. So off to the local GP, who seemed to think it was probably pneumonia, so gave us some antibiotics and a form for a x-ray if he’s not heaps better by tomorrow. Bugger! On top of this, the weather has turned, and it’s been raining all night and all day. Supposed to be setting in for the rest of the week. Poopitty, poop, poop. So fingers crossed Will improves, and that we can get a few fine spells to collect the bikes tomorrow. Get well Will.