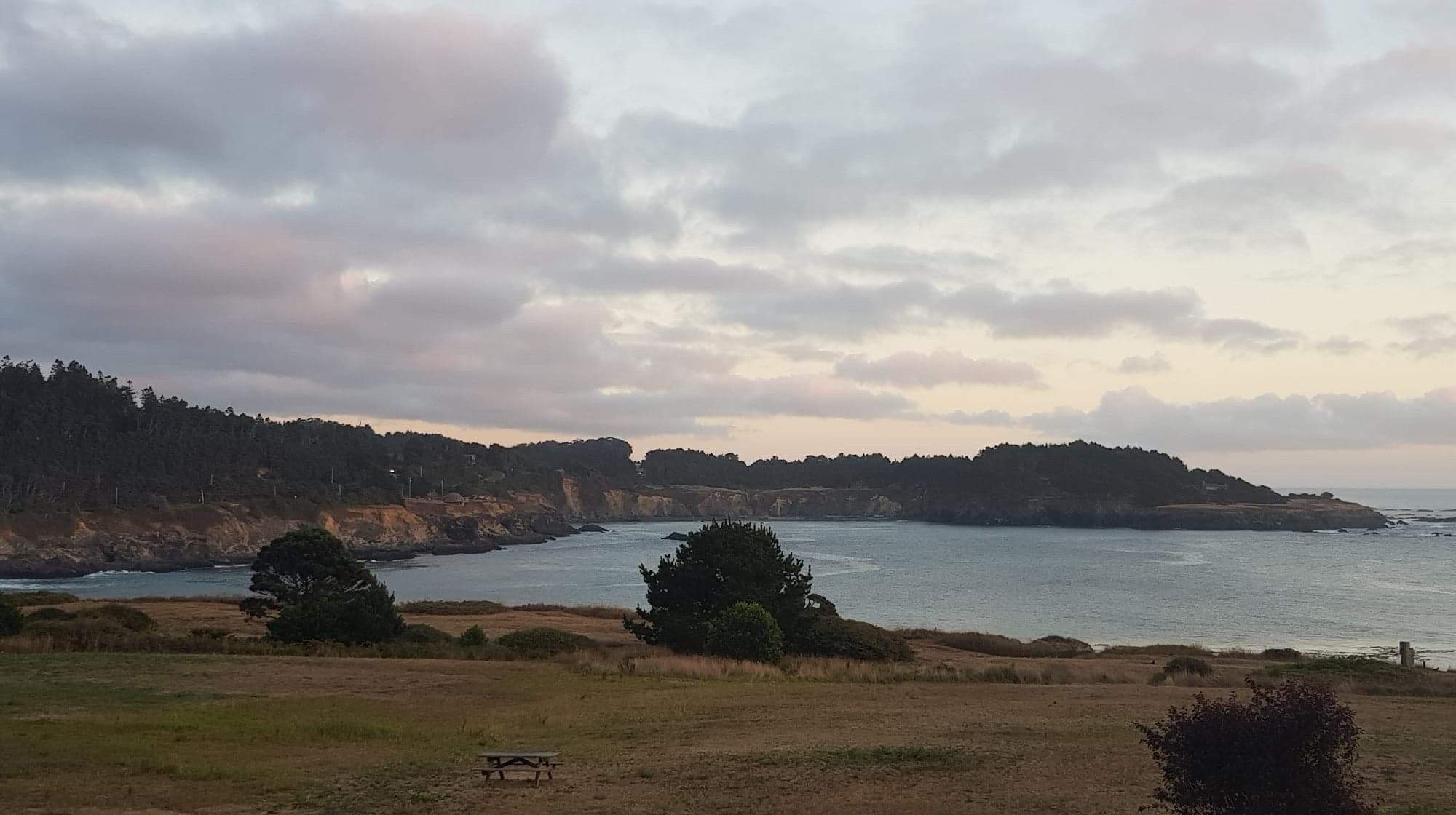 The big climbing day has arrived, and it doesn’t matter how long we stay put, rest or try to avoid it, we will still have to do it eventually, so let’s get to it. Luckily it was a great weather day, not too hot, and clear and sunny. Bruce was up and gone before we even got out of the tent, and Alan was just faffing around, taking his time like us. He did hit the road a bit before us, but on the first part of the climb, we found him pulled over, adjusting his chain and taking off a layer. 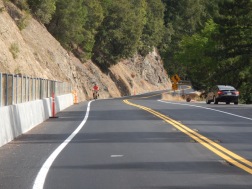 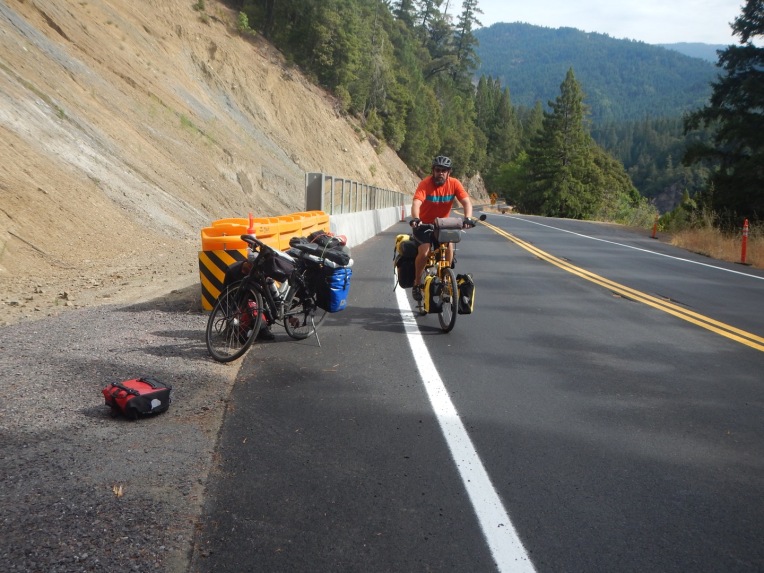 All packed up and ready to bust this hilly legend. And we start, poor Al is having chain issues, but insists he’s under control. Good luck mate.

Good old granny gear, was in charge today, as we just plodded up the winding hill. It was not as steep and killer, like I’d imagined, but it was a long, long, long steady climb. We had to take a few stops, to drink, and just give our legs and bums a break, but really, we just quietly plodded up. As you can imagine, there weren’t too many pictures taken, as we struggled just to get the job done. Luckily it was a pretty quiet road for traffic, and the few vehicles that did pass, were very kind, even encouraging. We made it to the top, 2000ft, after an hour and a half of pedalling. Man, that was okay. Amazing. 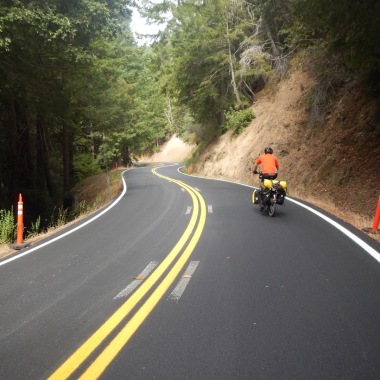 Just a little around the bend, and things became a bit easier. Ready for some down hill, speed action. In a minute or two, hey?

The run down wasn’t that spectacular at first, and after we stopped for a bit of a snack break and recovery, it got a bit more exciting. Not before another couple of cyclists caught us. Jeff and Lori were on a big ride, very lightly packed on bikes with fat tires. We all zoomed down the hill together, and rode along in a convoy.

It was nice riding for a bit, in amongst the trees, on a good bit of road, and I was feeling pretty darn proud of myself after conquering the mighty Leggit Hill. Next minute, we hit another steeper incline, and Jeff informed me that indeed this was a second mega climb up the same amount of elevation, only in half the distance. Oh for Fuck sake, really? I was thinking we’d hit the coast in a minute and it would all be a lot flatter. So up we go again, granny gear well engaged, and it was way tougher. My legs were in complete whinge mode, sooking like bitches. I was dropping back. Stopping heaps to rest, and wondering if this hill would ever end.

Certainly, it did, and I couldn’t have been more grateful. A nice and super quick downhill, and bang, we’re back on the coast. Just like that! Wow! It was spectacular.

But what do you call this shit, California? Cliffs, “Gulches” (narrow, V shaped ravines that are formed by fast flowing streams), mouths of rivers, and winding roads, with not much shoulder. So this roller coaster is the sort of horror show, only the best of teenagers can withstand. The slow, chug, up the steep, steep hill, to build the tension, just before you go hurtling down the other, just as steep, side to then whip around to the right at such a sharp and speedy angle, you almost loose your glasses and your lunch. Repeat this a million more times, and try not to chunder. Oh….my…..god, California! Are you trying to compete with The Canadian Rockies for who has got the most annoyingly difficult hills? Close call today. 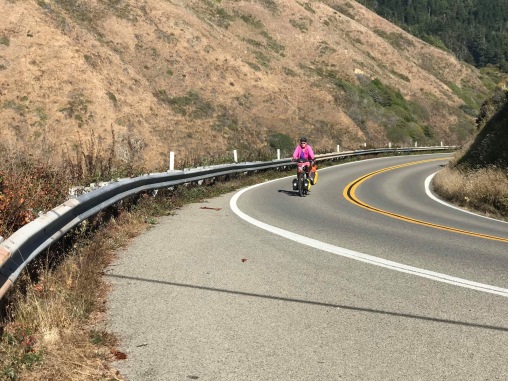 This stuff is stupid. I’d rather do Leggit Hill. One long one is easier than fifty of these bad boys. Ugh!

Will, Jeff and Lori, were doing okay, but I was really struggling. We took a break in Westport, and got a huge and much needed sandwich from the local store. We considered stopping here, but with 20kms to go, and it looking like easing up on the hill department, I thought I could make it. We did have a bloody good tail wind after all.

Uuuuuuuup…….Down! Over and over again. Finally it was starting to get better, but the three others were having to stop and wait for me so much, it was really starting to upset me. Fatigued and frustrated, I was getting angry at Will for doing so well, and not hanging back with me. Completely and utterly unreasonable. Jeff and Lori were so kind, and insisted that they wanted to stop too, but they had plans to go into Fort Bragg and stay in a hotel and it was getting cold and late. Somehow, I don’t know how, we made it to the State Park, after a short grocery stop at a little service station/local store nearby. We said goodbye to the other two, and hope to see them in Southern California later in our journey. Rolling into the hiker biker camp, we spotted David’s (the German) tent, and were surprised. We totally thought he’d be further along. He is doing a good job of taking his time, so as not to arrive in San Francisco too early.

Another couple of young guys, solo cycling also rolled in, and it was a nice night sharing stories. Lenard was from the Netherlands, young and fit, and had broken his distance record today. (Remember we had a super hilly day) 140kms today! So he did our last three days, in one, including the mega climbs. Bloody hell! He didn’t even look tired, or sweaty! Otto, another “young’n”, originally from New Zealand, but residing in UK, was also smashing out the kays, and had started his journey in Alaska. Amazing, amazing stories. I love it.

Nope, shit is not happening today! Not enough weakness left my body yesterday, too much pain left. I can’t ride anywhere today. Oh no siree! Oh but we have to Jen. What? Why? Nooooo!

The two young whizz kids are long gone, trying to beat Lenard’s kilometre record, David is just enjoying the sun and packing up leisurely, he knows he can smash out a tough hundred if he needs to, but not me man, I can barely get myself to the dunny. But Will is right, we have to ride at least some kilometres, we have locked in some stuff in San Francisco, and now are committed to a date. Bugger! The conciliation is that we did a bigger than average day yesterday, so we can do a smaller than average day today, to kind of rest, and it won’t make the problem bigger.

So we put our wet shit in the sun to dry, had another coffee, and waved off David. At some point before check out time, we rolled slowly off towards the coast, where the ranger had told us of a bike trail going all the way into Fort Bragg. Sounds perfect for me today, I don’t need any pressure. 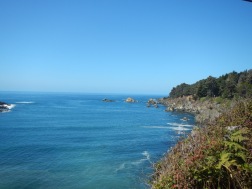 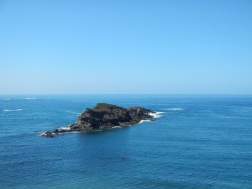 So buggered we hardly took any photos along the bike path. Poop.

It was nothing but a nice, relaxing and quite scenic ride to Fort Bragg. So bloody nice to be away from the traffic today, for a bit.  In Fort Bragg, we stopped at a bank for more cash, spotted Bruce cycling by on the highway, and then we headed off to our accommodation in Mendocino. The ride along the highway was short, a little hilly, but nice enough for a very sore and tired Jenny. We rolled into town, well actually we climbed into town, and rolled down the street to the Mendocino Hotel. A lovely old world building, first constructed in 1878, and lovingly restored and period furnished. It was great. 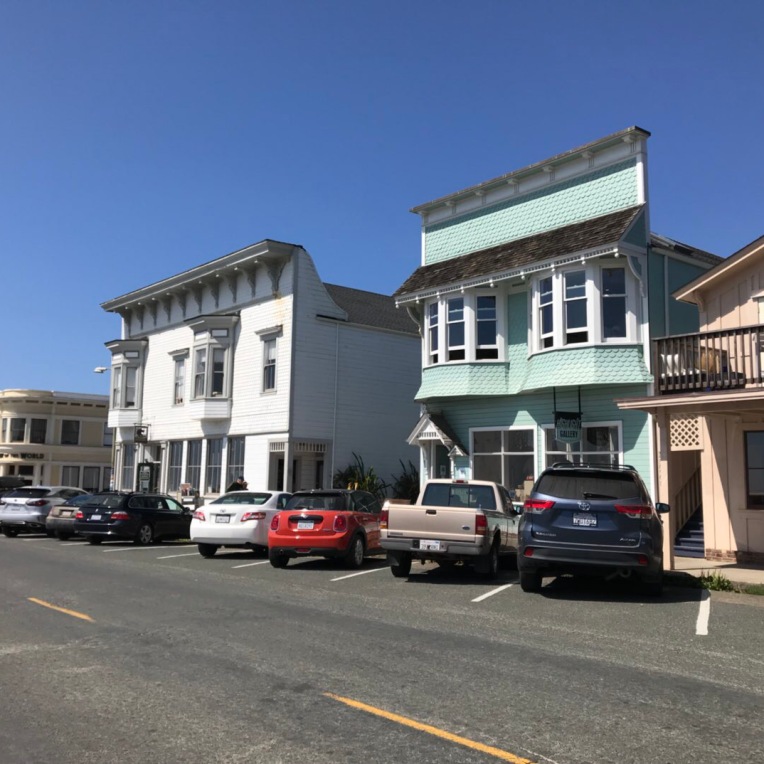 Mendocino is a very quaint little town, with some lovely arty shops. A beautiful setting, and worth a visit.

We ate lunch in the dining room, checked in, and the climbing wasn’t over for me. The bloody bed was above my waist high. Shit, where is the step for people with duck legs? Our room did open onto a communal balcony, with a stunning view of the bay and sunset. Just what the doctor ordered. Relax, enjoy the view, and rest your weary legs. Just don’t get in and out of bed too many times. 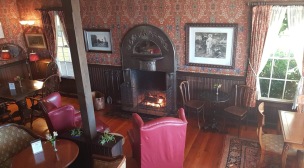 Looks pretty restful, doesn’t it? It was a great spot to relax, the old building is fantastic. Lovely shared bathrooms, all different styling, and the floor was all different levels. Lots of creaking and old styled wallpaper. So well done.

One thought on “We Leggit To The Coast”