30th October to 1st of November

(cover photo taken by Saheed, with me sitting on his 1987 350cc Royal Enfield “survivor bike” he inherited from his Granddad, Jaipur, Rajasthan, India)

It’s a long one, grab yourself a drink & settle in for a yarn.

Firstly I cannot rave on enough about how good the Rajasthan 10 day Nevermind Tour was. The crew was excellent, it cost us approximately $3600AUD each which included everything except, flights, insurance & beer. Very good value.

A huge thanks to Damien, Naim, Saheed & the rest of the Nevermind Team…good job !

Also we ended up riding with a great bunch of people, there was a slight bit of friction between Jenny & Jarod after the bike crash on day 2, but that was soon smoothed over & forgotten about. Jarod turned out to be quite a character & won the rides, Chimpoo Award (roughly translates to Bogan Award) .

Unfortunately we didn’t get a chance to say the proper fair well to the 4 Direction Team as everyone was knackered after the 12 hour train ride on Saturday & the young blokes had to leave very early to catch their flight on Sunday morning.
Blake, Jarod, Dave & Robin, if you get to read this blog post, all the best & thanks for a great ride !

Sunday the 30th of October was “Happy Diwali Day” you will have to check it out if you are curious but to us it seemed like Independence Day, Christmas Day & Easter all rolled into one topped off with the uncontrolled sale of fireworks.

The Sunday mission for team wiljen was to organise motorbikes for the next 6 weeks so we can continue our Indian bike adventure at our own pace. We grabbed a Tuk Tuk (3 wheeled, small vehicle with a canvas roof & tiny motor) & it drove us over to New Delhi to catch up with India’s Royal Enfield Legend, Lalli Singh.

I first learnt of Lalli on the internet Adventure Motorbike Forums a few years ago. During our research for this trip, his name is often mentioned, he even sorted out a RE bike for Guy Martin (Isle of Man TT Race fame) for the Indian doco he made a couple of years ago.

When we arrived at Lalli’s workshop it was closed, after ringing a couple of numbers & sending an email, we were still unable to get in touch. I had spoken to Lalli on the Friday & he said he would be there ???
We did eventually meet up with Lalli on Monday only to discover that he had recently shifted workshops, so as it turned out we were in the wrong place by about a block. Not to worry, that’s India in a nutshell.

So slightly disappointed we caught another Tuk Tuk back to Old Delhi, the traffic was horrendous, obviously being Diwali Day made it worst then usual, to travel 5kms took nearly an hour and a half. The driver did rat runs down alley ways up the wrong way of one way streets etc. it was so crazy. He was a good driver & I could feel his frustration so when we were still about 300 metres from the Tara Palace Hotel I told him “all good” gave him a hefty tip which made him smile, then Jenny & I walked the remainder of the way. Making a quick stop for street Chai.

The rest of the day saw us saying goodbye to Darren, Gary, Gaz, Sean & Craig. We all shared a few drinks up on the Tara Palace roof top, in the background fireworks were exploding left, right & centre. The Delhi air was thick with smoke & pollution, I think the guys were happy to be heading home to Australia.

That night it sounded like a war zone, constant large & small fire work explosions, loud Hindi music & tooting from vehicles. Damien had purchased a few fireworks & set them off. We also met a couple who are on the next Nevermind Tour, Chris & Silvia. Later we noticed a fire had just started in a large pile of rubbish on the rooftop of the building next door. I went & informed a Hotel staff member & he said “no problem, don’t worry”. But I was worried, it a past life I was on a couple of mine site Emergency Response Teams & qualified up to Intermediate Fire Fighting. Just as I was telling Jenny it’s time to think about packing our stuff & moving out of the Hotel, the staff realised the seriousness of the situation & got a hose & doused the flames.

Pretty sure the fire next door wasn’t caused by us, just before it started a mega firework star burst above us.

Monday morning sees us arrange a taxi for 3 hours, it’s a bit more cost then Tuk Tuk’s but better & more convenient. The driver gets us to the near vicinity of Lalli Singh’s new Workshop. Then stops & starts talking on his phone, we don’t know what’s going on ? It’s difficult to communicate with him, as it turns out he has rung Lalli & Lalli is driving over to lead him/us the short distance to the New RE Workshop.

The meeting goes well, Lalli is a gentle, quietly spoken man, who speaks good English & is well educated. He tells us a bit about his Sikh Religion, which both Jen & I find fascinating. When I think about it I’ve never had much to do with or ever conversed with a person of the Sikh faith with the exception of the odd word with Sikh Perth taxi drivers. I guess this is one of the reasons for our trip to India, to meet new people & get to understand other cultures & ideologies better.

Lalli even throws me the keys for a near new light weight Royal Enfield Himalayan 400cc, single cylinder, Adventure Bike, they have only just been released in India, I have no idea if & when we will see them in Australia. Not having a helmet or jacket on I take it for a ride. I just stick to the back alley ways & only get it up to 3rd gear. It actually seemed pretty good. 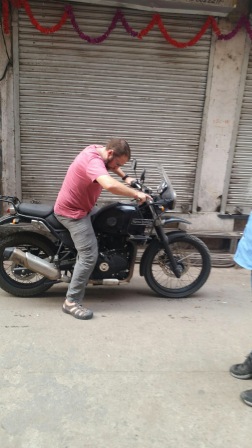 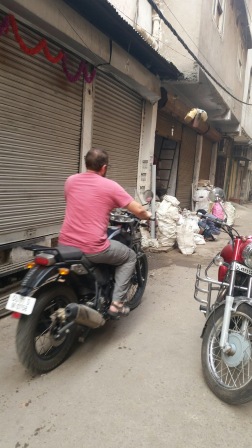 We are informed that we are unable to rent the bikes as renting isn’t allowed in India ???

This means Jenny & I are now the proud owners of a RE 500cc Bullet & Himalayan Adventure 400cc. This bike habit of ours is starting to get out of control !!! We now have 5 motorbikes & 3 high end expedition touring bicycles in the “team wiljen” garage. Not quite the original plan…

The good news is that after our tour we sell them back to Lalli at a lower price which I guess would equal the hire amount of approximately $30AUD per day for each bike. Sounds complicated & it is, both parties need a big chunk of faith to make the deal and our bike adventure work.

So after all the business dealings, I wake up our taxi driver, he stops at a shop that Lalli gave us directions to get to. No we are not getting “Carpet Bagged”, Lalli has arranged for us to get a couple of complementary good quality Tee-Shirts, I buy an extra one while there. The taxi driver did try a couple of times to get us to stop at “friends” shops, but he could sense that we were not in the Carpet Bagging mood so didn’t push the issue.

Once again we arrive back at the Tara Palace, Jen & I have a rest, then meet more of the new Nevermind Tour group on the roof top. They are all excited & in high spirits. Dinner, drinks, conversation & early to bed…..Mission Motorbikes Successful.

Today, Tuesday the 1st of November, Jenny & I have a car & driver take us approximately 260kms on the NH8 highway to Jaipur it costs us 2800IR, with tip about $60AUD. The journey takes about 4.5hrs I slept half the way, there was so much smog that you couldn’t see much but the immediate scenery.

Established in 1726, Jaipur, named after it’s founder Jai Singh (Pur means “On” or “Settlement” in Hindi) population about 3 million. It is the Capitol of Rajasthan.

We will spend 3 nights here, the bikes will be delivered to the hotel on Thursday the 3rd. Jenny & I plan to exit the city just before sunrise Friday morning, should be “very, very, good”……