Bhavnagar to Honesty Hotel just out of Karjan 220kms

Worst hotel so far, bathroom straight out of Mexico prison. Staff were nice and helpful.

Straight from our “Mexican prison cell” to Royal Enfield, no breakie, and there we sit for a couple hours. The very nice head mechanic kept coming back and saying, “Just give me 10 or 15 more minutes” while bobble heading. The hanger (hungry/angry) was starting to develop, so we decided to head to our new digs, which was 500 meters walk. Easy, peasy! We loaded all our gear on Himo, and followed Madam Google down, around and into a dead end alley, where she told us our Palace was. It’s frickin not here stupid cow! So we go around the block, almost to where we did the u-turn, in the beginning, and there was a huge billboard style sign for Nilambarg Palace, with ornate Royal gates and a guard….how’d we miss this? Probably too busy following stupid Google and trying not to die in the mad traffic! At least our home for the night is cool, old and the Prince still lives here.

So nice to get here, first up a shower, I felt terrible. Then lunch, then relax. Nice grounds, and very peaceful considering it’s location.

After a boring and stressful day, waiting to find out what was up with Lisy, and discovering she has a major breakage, oh and add to that a “Super Moon”, sleep was not something I got much of. Some nice mind numbing wine would have been nice! So we woke up and had early breakfast with a guy from Singapore, who comes to buy second hand machinery from the Alang ship wrecking yards. Interesting! Then we packed, and Will walked over to pick up my bike. I loaded Will’s beast, and paid the bill. For once our cards worked in Gujarat. Then I proceeded to wait! Being already a bit testy, waiting with no word was becoming frustrating, and after an hour and a half, I tried ringing Will’s phone. Nothing! Poop! I rang the service centre and got an answer on the second try. I spoke with Will, who told me they had put her back together, but had made a small error and were on the job. She now has no auto start, so we have to kick start her old school style. Now I have to warn you, peeps, bad language and bad attitude are about to be unleashed. I can’t kick start the fuckin thing, it’s on the right side, and my right knee has no strength. 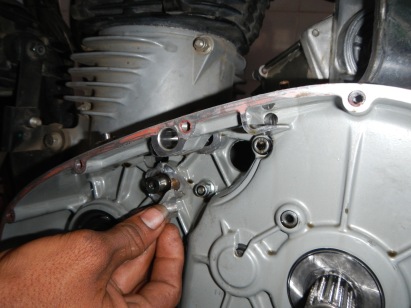 Poor Lisy, she is broken. Poor Will, he is dealing with everything. He is holding it together without beer! Amazing work! Amazing guy!

By 11ish, Will is back, we are loaded, and Will kick starts the bike for me. It seemed pretty easy. Off to get fuel and air, and getting started again, under a bit of pressure at the fuel pump, was not so easy. My blood pressure is rising. The kind fuel attendants come over and suggest, to a hot sweaty, frustrated Will, he should just use the auto start! No shit Sherlock, great idea, IF IT FRUCKIN WORKED! That part of me that is not nice, was starting to get vocal. Luckily Lisy started and we putted over to get air in the tyres, and I was not turning her off. Phew, finally we could get going. Traffic was the usual today, bloody annoying! 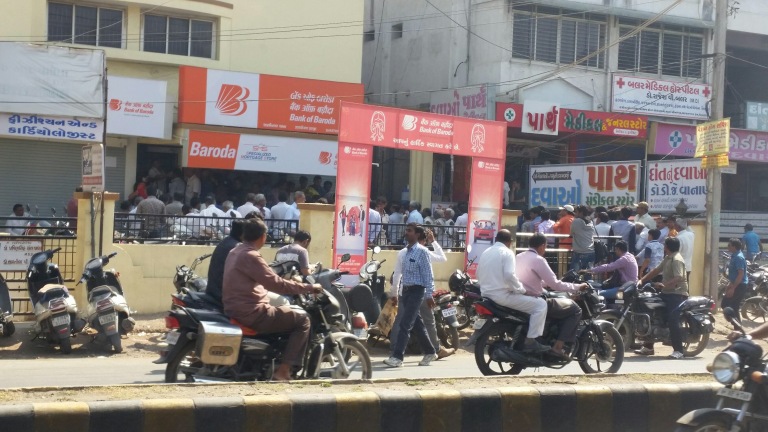 We need an ATM, but these lines are ridiculous……and at every ATM.

We got out of Bhavnagar and onto a pretty good road winding through salt lakes and plains. Not pretty, but interesting. This is okay! A brief pause (I’m not stopping if I don’t have to) to buy water, then away. A couple of hours later we needed a rest, stretch and stopped at a truck/food stop (here they call themselves things like, Hotel Apple and Hotel Goodluck). Again we had an awesome lunch for very few dollars, eating delicious unknown foods. I was starting to feel less stressed……until we had to start the bike again. After several goes, Will was sweating buckets, puffing like a bitch, and a bit concerned. Then he noticed I’d left the kill switch on…..oops, shit, sorry Will! She was flooded, so we knew to just wait a bit and all would be okay, but Nooooo, the kind and caring (but have no fucking clue) people hanging around, staring, had to put their two bobs worth in. Now we don’t speak the same language, but we got the idea through charades…..”battery, flat”…..”auto start”……Mate, the battery isn’t flat, the auto start is broken, she’s flooded. But they had to try. A few toots of the horn before giving it a kick, that’ll surely do it. Blood pressure through the roof again! All number of vicious rants, coming to mind, but through it all, Will stayed calm and collected. We shooed them away, and sat for 10 minutes. Then she started. I couldn’t get out of there quick enough. 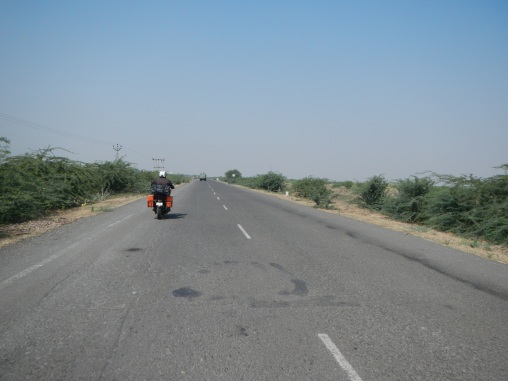 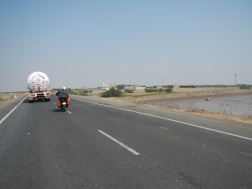 Here’s one of the gawkers, red backpack guy, he followed and sped past us for much of the day. Sitting right in your blind spot, or cutting you off over the speed humps, undertaking trucks on the shoulder, but we waved to each other every time we passed.

Back on the road, traffic was increasing, and poor Will had to listen to my disgusting language and ranting about every car (that I was calling another C word), gawker, and dumb ass Indian driver, coming straight at me on my side of the road for no good reason! Those of you who know me well, can imagine the sort of horrible crap spewing from my mouth. Remember, I was very tired, very stressed, and there was a Super Moon! It’s not the real me, or the real way I feel about India……most of the time…ha ha ha. 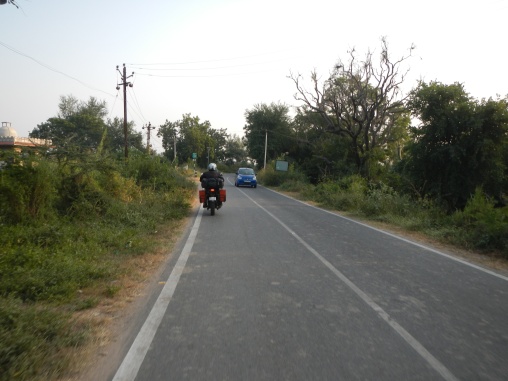 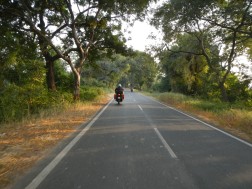 The last half of the ride, heading south after rounding the gulf, was much nicer, but enough was enough, Will couldn’t handle my swearing anymore.

At about 4pm, we’d had enough, and stopped (paused) to check out a couple of highway “Hotels”. Lots are actually just restaurants, so we had to push on. I’d originally picked out one, that definitely had rooms, near a place called Karjan, but around five, we spotted a big Honesty (A hotel chain here) complex and paused to see if they had rooms. If they were better than Hotel Sankalp, I’m in! Luckily, after Will assured them we could pay with small currency (no rooms if you have 500’s or 1000’s) and the bathroom didn’t look like the ones from a Mexican prison, we could stop.

Not a bad day, just a bad attitude. I just need to get rid of my cold, it’s getting better, and re-centre myself, oh and get out of bloody Gujarat! I need a beer, don’t worry about Will, I need one. One more day, then Maharashtra. A new state.