Getting to Saputara was a fantastic ride, but to our disappointment, no beer tonight, we’re still in Gujarat. By a whisker, literally about 500meters. So, we decided to have a pre-dinner snack, of Jaisalmer “special” cookies (half one each). Oh dear, this is probably not a good idea, before ordering dinner in India, Gujarat, not speaking the language…..hhmmmm, anyway, it was a very funny evening. We went down, got seated, and had some Indian salad, sliced tomato, cucumber and onion with limes (green salad). Very fresh. At some point, there is a fly (is there really? I don’t think so) so we are trying to swat it and wave it away, when the waiter (a trainee, as this is a training hotel) comes over, and sees us waving a bit madly, and started madly waving too……this began some giggling, which almost got out of control, but we got it together. Then Will was trying to put salt on the salad, shaking the salt shaker madly, hand underneath to check if any was coming out, when a different waiter came and took the shaker, placing another on the table. Seconds later, just as Will was grabbing for the shaker, another waiter came and replaced the replaced shaker, again…..this was like the cups and ball game……what? Which one works? Uh oh! More giggling, and trying to be normal…. Who are we kidding…there’s that fly again! 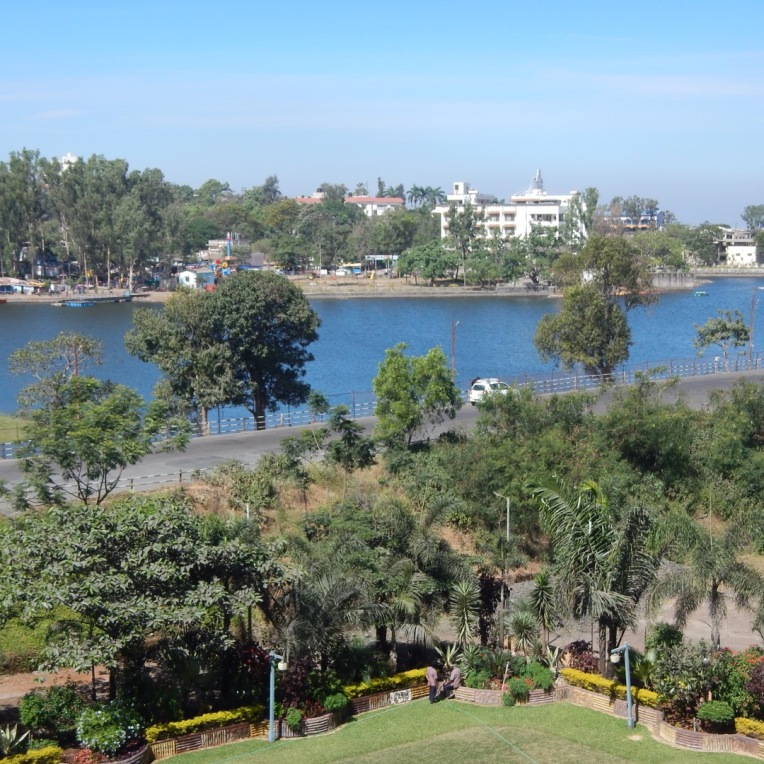 Our very nice hotel and view, they don’t quite know what to make of us.

The next day, which came after a VERY good nights sleep, we just chilled out drying our washing (done in the shower bucket, always provided) and relaxing. We had late breakie, so didn’t need lunch, and in the early afternoon, decided to hop on old Himo, and have a ride around this Indian tourist town. Akash, the Hotel Manager, had told us we could try getting cash through one of the little shops in the market, who had an Eftpos machine, and we could swipe our card just for cash. We found it, we tried it, it failed! Bummer! We did get some more phone credit and a free Chai and Coffee, while we tried. Another lovely, helpful man who got me registered for Airtel Money ( Indian phone company, big here and Asia and Africa) and has made it heaps easier for me to recharge my phone. Then we rode up to Sunset point, which is about 1000mtrs above sea level, to find the Adventure playground, Indian style. 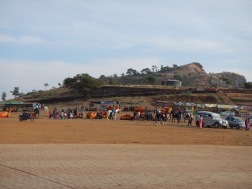 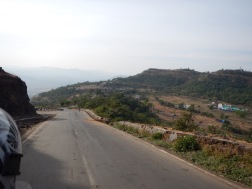 The Adventure means something different in India, but the ride up and down was cool.

The views were great, the adventure…..not so much. They did do paragliding, but that’s not for us this trip, but the rest was bouncy castles, horse rides, and weird little rat-motorbike things. But the view was awesome. We headed back, and continued relaxing at our very nice, quiet hotel. We had dinner, still no beer, and no cookies either, watched a couple of old kids movies, and a documentary called Somewhere Else Tomorrow by Daniel Rintz. Well worth a watch, people! Great philosophy and thoughts on travel and life. Then bed! 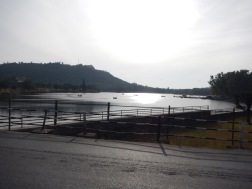 Saputara looks like it is new to being a tourist Mecca, but I think it is well on it’s way.

We got up early, and after a breakfast of cornflakes and Vegemite on toast (I was not up for curry this morning), we were packed and at the bikes by 8:45am, and after a nice man tried to point out to Will, the auto start switch (not working man….ugh!), while he tried to kick start Lisy, we shoved off for fuel. All fuelled up, we head down through the other side of the Western Ghats Ranges, which was fantastic. More winding roads, with great views, massive pot holes, and crazy cars. 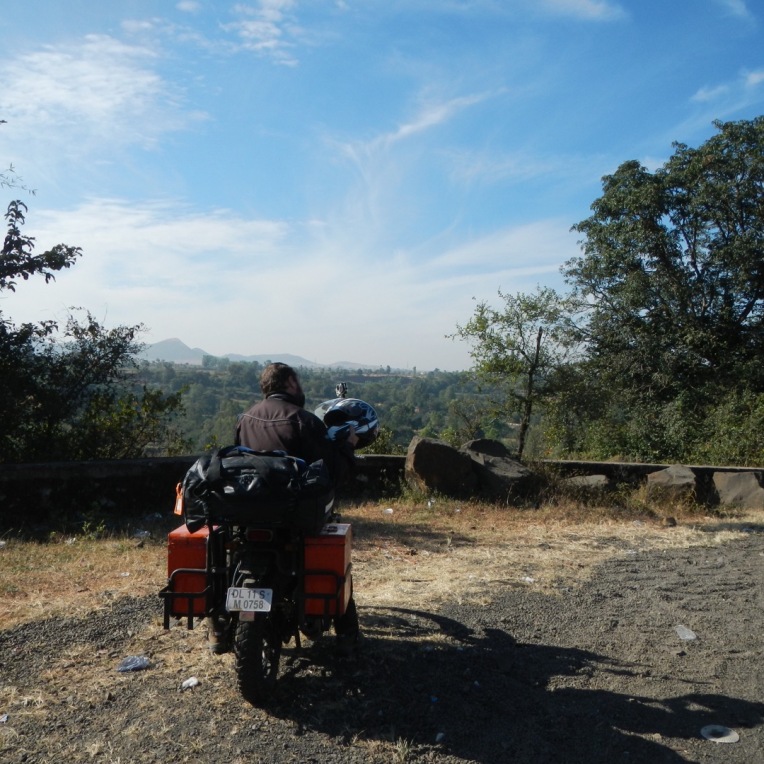 “What is going on? Gary you tool, why aren’t you working properly!” 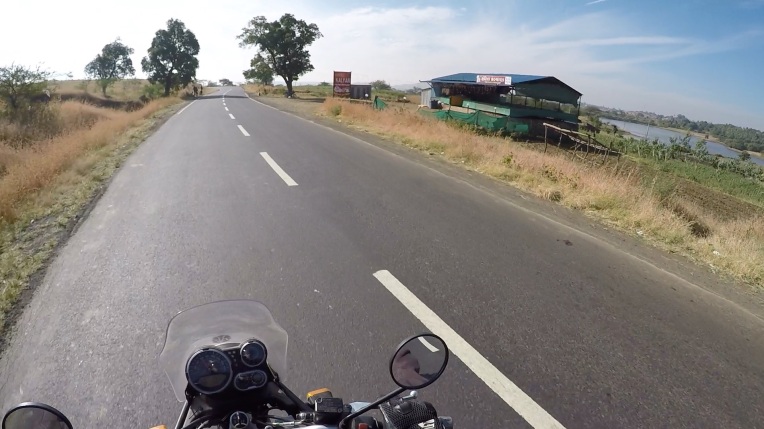 Crazy cars, crazy Will, and crazy scenes. This is India…

It was another good, short ride. Lots of great looking farm land, and interesting little villages. Davo GPS took us on one of his “special trails”, as he was having a stupid dick day, and kept freezing, telling us to u-turn, and sending us on some very iffy tracks. On the push bikes, we would have been chucking a spaz, but on the motorised beasts, we just kept trundling over the pot holes and dirt tracks until we got to where we needed to be. Before this trip, if I’d come across these sorts of “roads”, I would have pooped my pants and tried to find another way round. About 35kms from Sangamner, we stopped for a break and lunch, at another “truck stop”, to have yet another cheap fantastic lunch. It looked liked cow pats, but was very tasty. The owner even came out to talk to us, and see what we thought of the food.

Stopped  for map checks. We’ll be eating them onions for lunch. And some more crazy sights.

The last part of the ride was on NH60, which was dual lanes, smooth and 80-90kn/hr stuff. We passed through a small range, and enjoyed the increase in speed. Before we new it, we were here! Somehow we found the hotel by sight, can’t read the signs, they’re not in English at all, and sorted a room. Luckily, Will and I have same surnames, or they would not have given us a room. So far, Maharastra seems predominantly Muslim, and they are particular about couples, marriage etc. No problem for us! It is not as nice as last nights digs, but $20 compared to $80, there’s a fair bit of leeway. Needless to say, we’ll be using our sleeping bag liners. But the bathroom is usable. Better still, the reception man went out and got us 3 cold Kingfisher beers, Strong! Whoah, Whoah, Whoah…fella, but frickin thank you so much! Dhanyavaad! 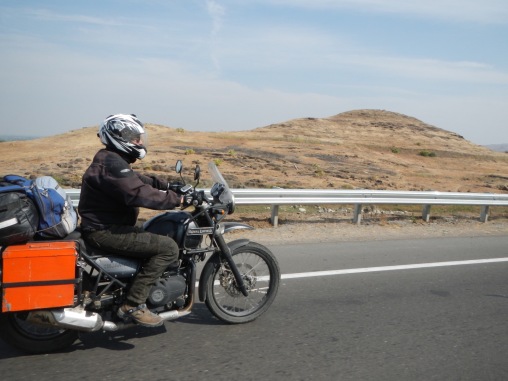 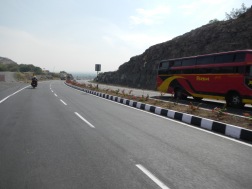 I’m getting the hang of taking pics on the roll. While getting speed up, use left hand to unzip jacket slightly and turn on camera, big revs, left hand now pull clutch in, Rolling, right hand take camera, aim randomly, press button, hope for the best. Turn camera off with free right hand, still rolling, big revs, release clutch, use left hand to tuck camera away and zip up jacket, while right hand accelerates to catch up with Will. Easy peasy!

So, another good day in crazy India, and we are going to venture out to find some food. Tomorrow we head to Navi Mumbai, via the Malshej Ghat, which is supposed to be a magnificent ride. We have booked AirBnb, so hoping that will give us yet another experience. Hope to find a supermarket, make our own food and get the bikes up to scratch for the last bit of our tour. Back in the swing. 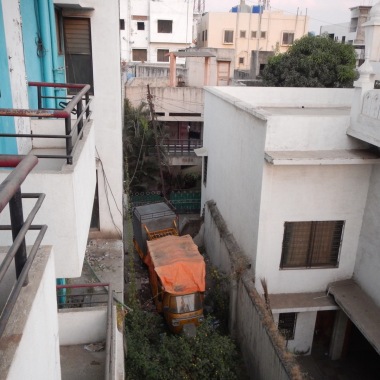 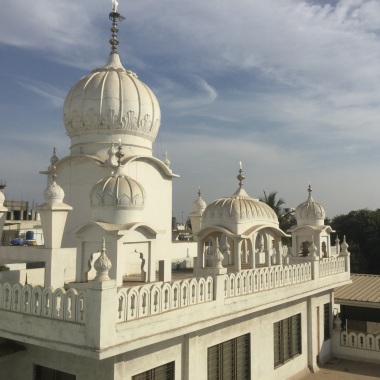 Our new friends from dinner, and the views from our room. Nitin deals in Bitcoin, we told him No business on Holiday, he was very cool about it. Not sure about Bitcoin as an investment, what is it, really?

NB: Dinner was a little local joint, where we met Nitin, Sandy, AniRudh and the owner. They were very friendly, the food was good, very spicy, and just to show us again how kind people are, they wouldn’t let us pay. Thank you all so much, we need to start building up our Karma bank again. Wow!

3 thoughts on “Winding Down to Maharastra”