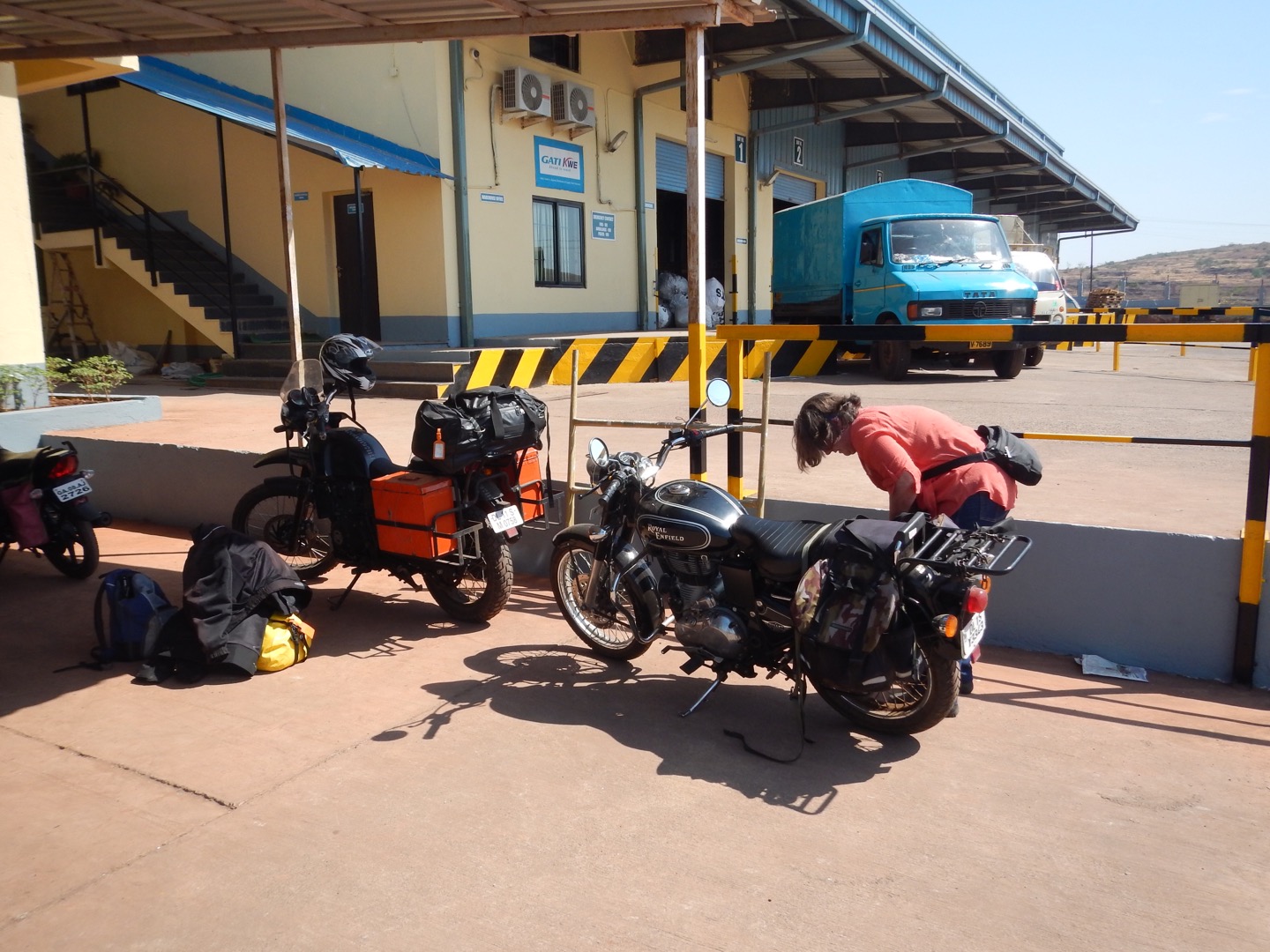 After a week of complete relaxing, we had turned from tough bikers into lazy beach bums. It is like that here in Palolem Beach. Not much to do, but enjoy the heat, by the beach, watching other people do the same. But our time was up, we’d got the message that our bikes needed to be at Gati Transport, so we had to go today. A day earlier than planned, which meant some fiddling of accommodation plans, but otherwise not a real issue. 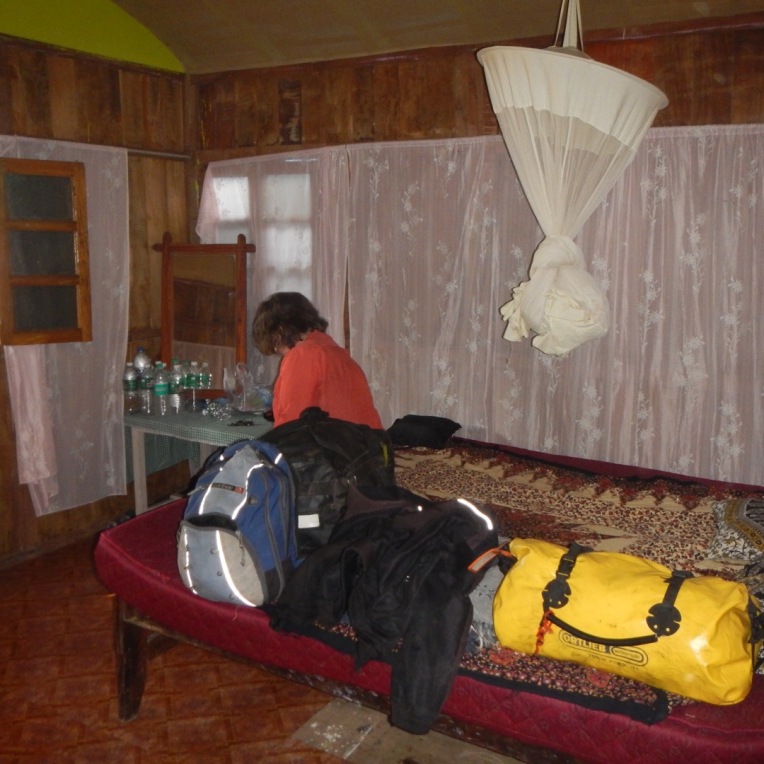 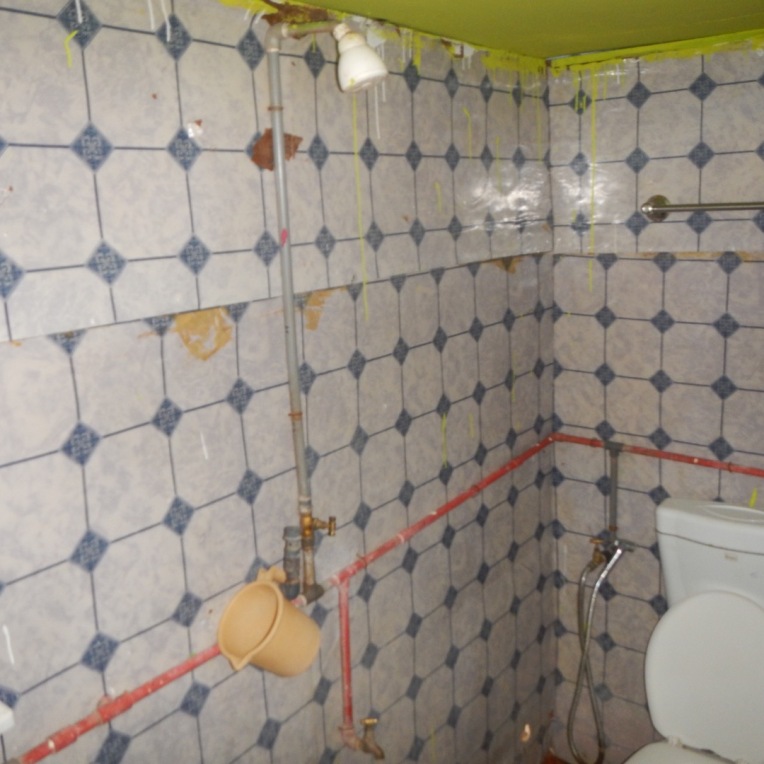 Our little beach hut…..not fancy, but cheap and relaxing. It was functional….

We didn’t sleep too well. With all the next plans going through our heads, and the thought that our India motorcycle adventure would be actually over. The morning opened into one of the best we’d had here, clear (as clear as we’ve seen in India) skies, flat, smooth water, and peace and quiet. We had our final breakfast at D’Costa Restaurant, and said see ya to all the guys who run it. They are awesome, and we didn’t have a bad meal there. Ravi was a funny guy, he owns it, and they are all relaxed enough to help you relax, but efficient enough to make sure you don’t go thirsty. Great place to stay for a rest.

So to the bikes we go, to load up for the last time. Will started the old Bullet for me again, and wouldn’t you know it, she was a bit sluggish to start. Next stop, was at the travel shop to photocopy some paperwork to send with the bikes. This took a bit of time, as there were lots of people coming in to try and get cash. I wonder how much longer it will take for the money crisis to end? 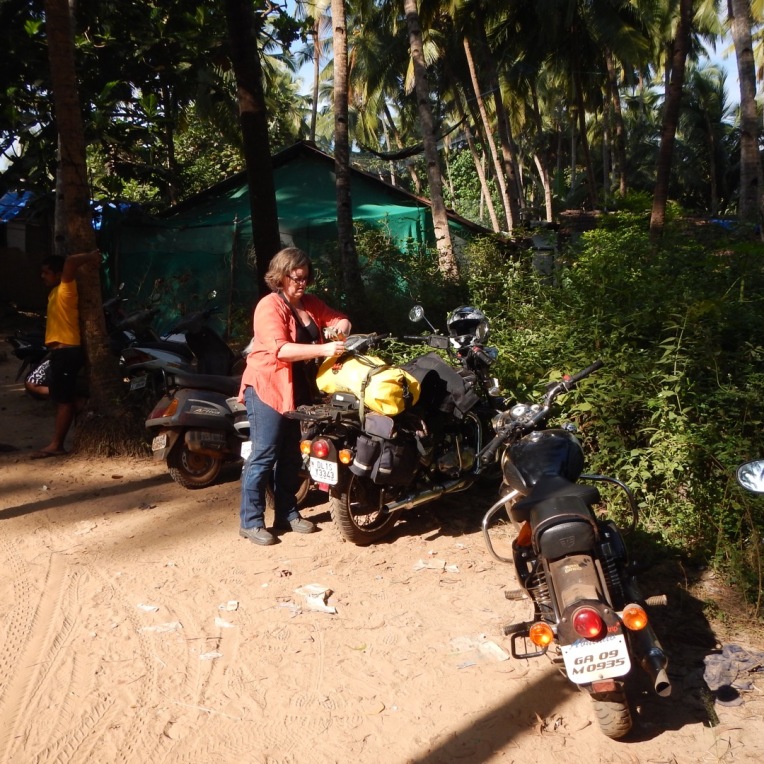 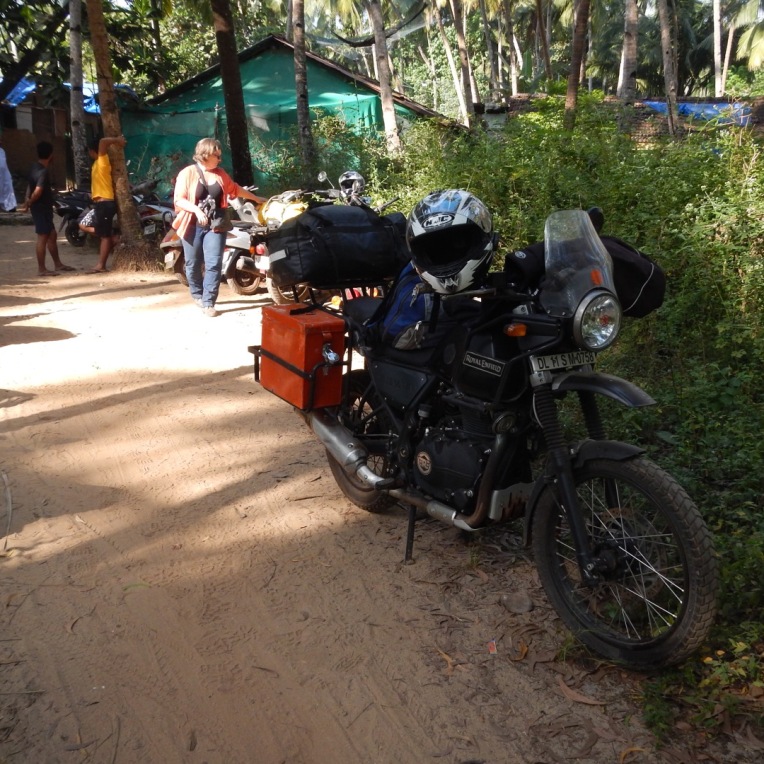 Loading up for the final ride was a little sad……it has been great! Always spectators too.

The final ride was not very exciting. I was feeling irritated and annoyed by the traffic. Why? It hasn’t changed in a week! Did I think they would have become orderly in the week we had off? Nope, same crazy stuff, with us riding quite a few kilometres on the shoulder, at one stage, as the oncoming stream of cars and buses seemed to think they had a double lane. Lucky it was a nice smooth, wide shoulder, and not a stupid dick shoulder like in South Australia. It was pretty hot too, and both of us were feeling a little strange. We were quiet, and just got the job done. Only one small hiccup finding the transport company, as both our guides, were a little off.

Now the fun began! Remember where you are, and how things have gone so far! This, we knew, would not be a simple transaction, even though Lalli had pre-arranged as much as he could. The man he had spoken to seemed not to exist, and there was much paperwork to complete, in triplicate……by hand…..no use of technology for this. They wanted copies of our passports, ugh, didn’t know we needed that, but luckily we had spares from our money changing days in Diu. Now, can we write a declaration that we are not transporting for sale, but for personal use? Okay…? But who cares why we are transporting? 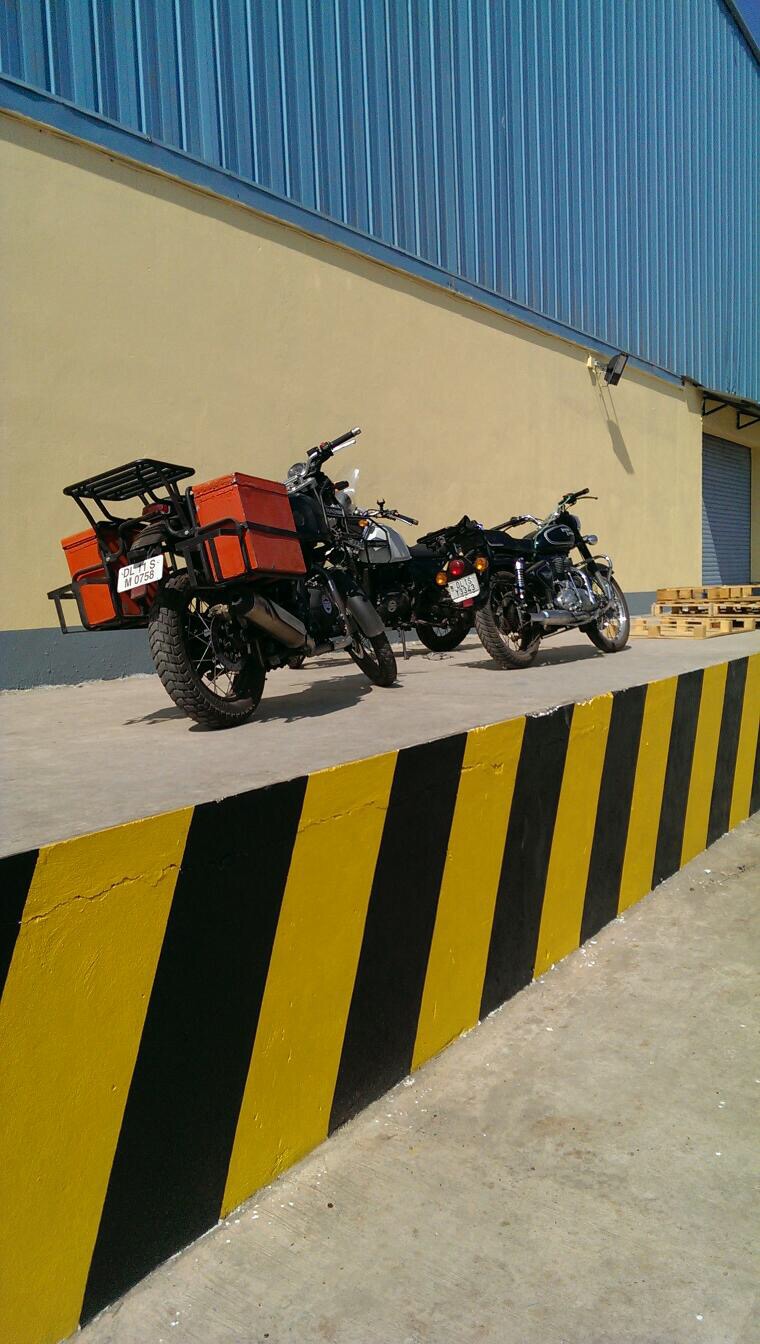 Ready and waiting to go home to Delhi! Thanks kids, be safe!

Anyway, after a long, hot, 2 hours of stress, phone calls to Lalli, and adding of imaginary costs, we had the bikes sorted (hopefully), and we had a taxi to our new beachside hut. I have to say, that I feel better riding my motorbike in this traffic, than sitting in the back seat with some crazy Indian taxi driver, who is unpredictable. So after about 20 minutes of terror, Will goes to pay him his 500IR, and he has the courage to reject one of the 100 IR notes, because it was too old and faded! Are you serious, mate? Do you know how hard they are to get these days? Gees, buddy, what if we don’t have another one? I was actually starting to feel pretty unwell, hot, and stressed by now, so it is lucky Will the Iceman dealt with him. 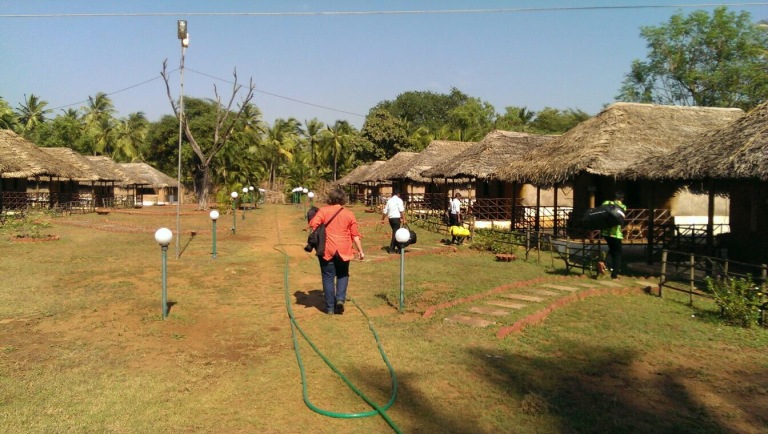 I can hear Will thinking..”What the hell is this Jenny?” But hey, who knows? Gotta try! 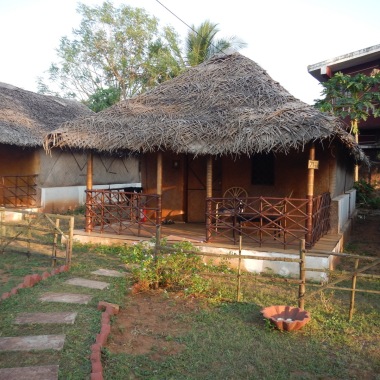 Our new beach huts. Has hot water, aircon, and fuzzy TV. Hey and a Fridge! Gold!

After checking in, which was a bit of a process also, due to our extra day, I thought food was what I needed, so we took a short walk to a nearby restaurant. It was nice, but as I ate, I started to feel worse and worse. Nope, I was not going to escape India without getting sick. Bugger! We hadn’t changed our routines or habits, I guess it was just time. Just happy we have a toilet and hot shower close by. So instead of celebrating with Will, the successful completion of our adventure, I stayed close to the loo, with my water bottle, and Will celebrated alone…….poor Will. It only got worse for him, as I got worse in the night. He had to get up and help me, clean up my mess, and worry again, about me. I waited as long as possible, but have bust out the Imodium and Hydralite. I hope things improve immensely today. I would like to go for a walk around, but I need to be sure…….you know what I mean? 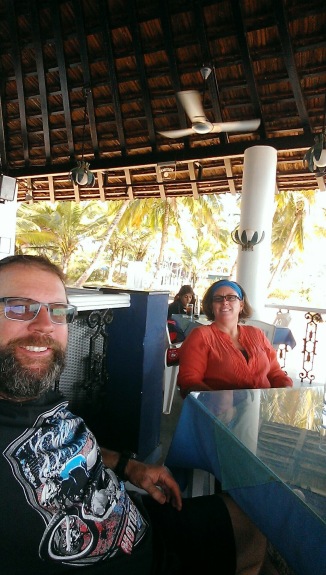 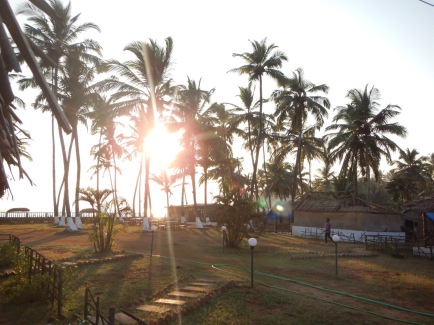 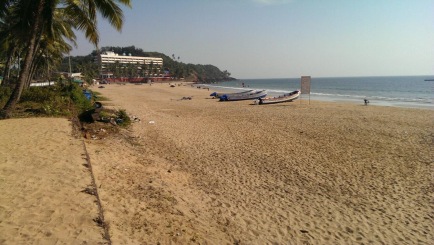 Our new local, Joets, on Bognallo Beach. It’s a pretty noisy place, lots of music, and close to the airport too.