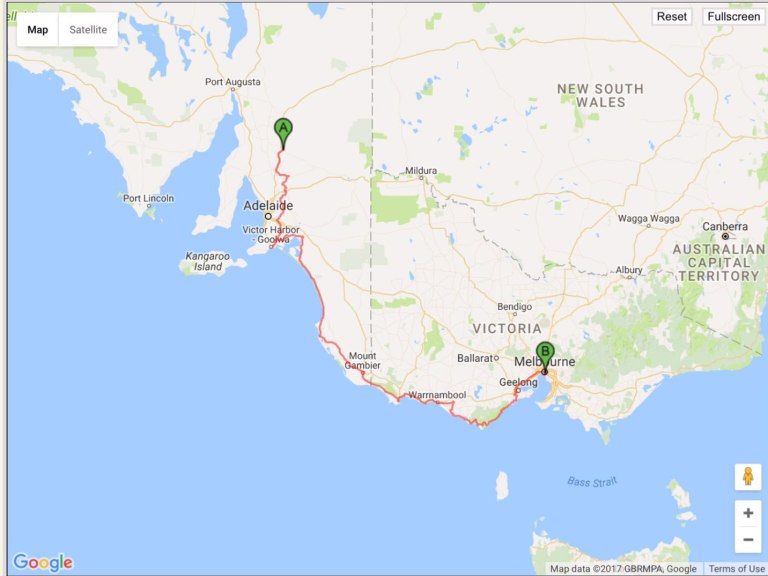 Lots of eating, drinking and for us, resting our stupid dick legs. The young whipper-snappers (all the others are younger than us), were loving Melbourne and it’s array of drinking and eating venues. I won’t dribble on too much, just check out these pics of the events. 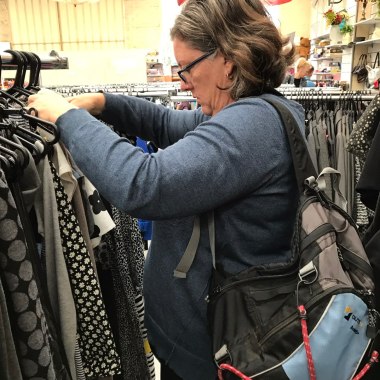 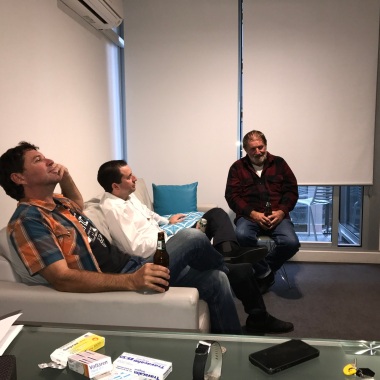 Bit of op shopping for good clothes, $36 gets us fully sorted, almost as well dressed as the Birthday boy. No, it isn’t Nicolas, almost though.

The Swamp Room at Gin Palace was cool and groovy, but too dark for Bill, he needed a good torch app to read the drinks menu. 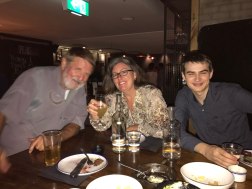 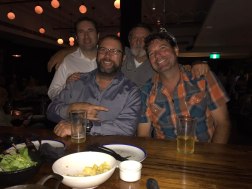 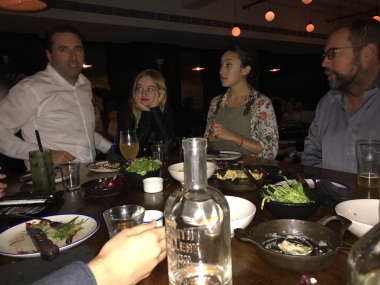 Meat Maiden put on an awesome spread of, yes, you guessed it, meats, and it was a big start to the celebrations.

Saturday – Will and I had contacted my cousin Lucas, who has lived here in Melbourne for about 8 yrs, and him and his partner Jackie, came and collected us around lunch time. They live in the northern suburbs, and thought to take us there. All new for us, and by the sounds of their efforts at deciding where to go, they are spoilt for choice. In the end they took us to a micro-brewery called, The Stomping Ground, which they had both had a hand in building and getting off the ground. It was really funky, and chilled, and we enjoyed a nice lunch and some good beers. They took us for a driving tour, through Albert Park, on the Formula One track, and around some outer suburbs. It was a great day, ending with cake on the infamous Acland street of St Kilda. Known for it’s cake shops and chocolatiers. 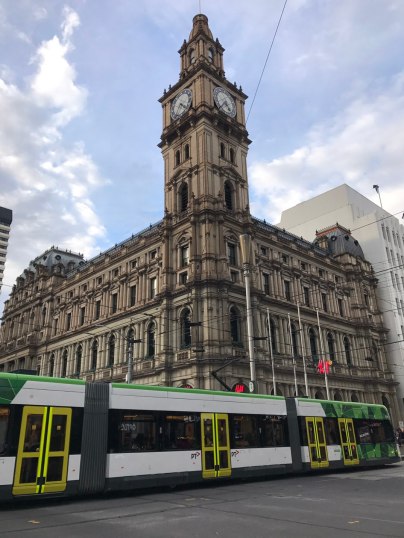 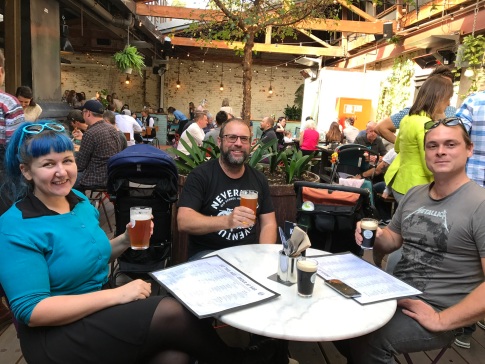 Lucas and Jackie showed us a great day, and Melbourne turned on it’s best Autumn weather.

Sunday – Most of the others went to a footy game at Etihad stadium, while Stacey enjoyed strolling the streets and window shopping, and we just chilled out and did washing (boring), oh and went to see another Myotherapist. Ouch! We ended the day at a Korean BBQ restaurant, which was nice, and we were the last ones there. Food, food, food! Oh dear, these dick knees better improve, or we’ll be in trouble. 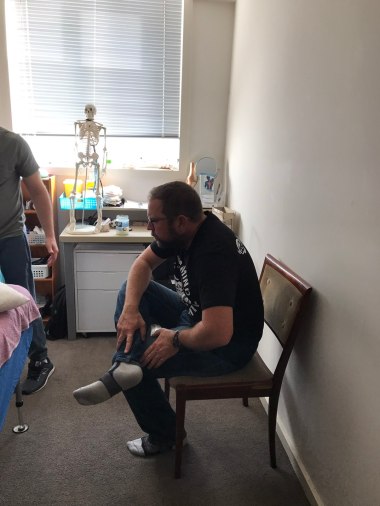 Will getting some instruction on exercises for his stupid dick leg issues. 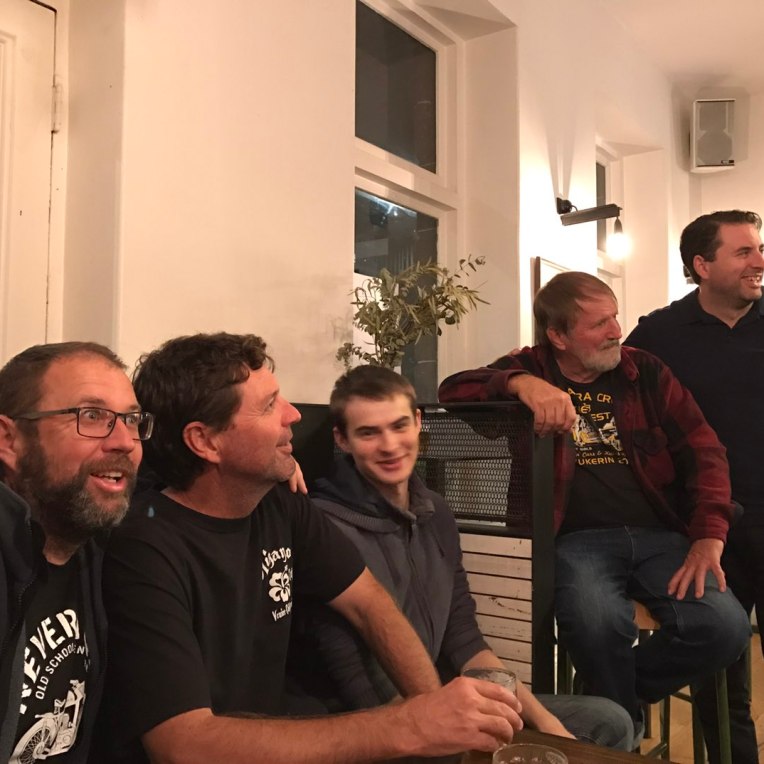 Monday – We’d been putting it off, but some shopping was necessary before we carry on our journey. Kathmandu had a sale on, so we went there to get some warm gear. Us West Aussies are not prepared for anything under 15C, and it’s getting cold over here quick. After some success there, we stopped in at Peter Stephens (one of the biggest motorbike and accessories stores in Australia) to check out new helmets. Ours aren’t that bad, but we thought we’d like to have a look at the modular ones. We went in, straight to the helmet section, where three staff were around. One was busy, the other two were chatting. As we looked at the range, we were discussing what we where looking for with ourselves, and actually tried on the most expensive ones in store. $899 each, no less. After about 20 minutes of walking up and down, trying helmets, with no service, we left! If I was their boss, and discovered they let customers who had been looking and trying those helmets, leave without even trying to make a sale, they’d be the next to leave with nothing. Their loss, we can live with our current helmets, for a while longer. Shopping done!

Tuesday- ANZAC Day and AFL at the MCG. For Steve’s birthday, the big event, was the ANZAC Day footy game. So Geoff had sorted us tickets, which included a brunch at the Crown Casino, transport to and from the MCG, and great seats right behind the goals, five rows back. It all started at 11:30am, at the Crown. We really enjoyed some great food, a few drinks, and lots of Remembrance and footy talk. There was comedy, music, auctions and a raffle. Just to add an extra bonus to the birthday week, Steve bought one raffle ticket, for $10, and pulled off the second prize. 4 Medallion tickets (not really sure what that means), including food and drink package, to the round 18 game here in Melbourne. Woo hoo, so cool, frickin good work Steve, better book some more holidays. My first ever AFL game, and what a game it was. Now, everyone knows I am not a sports fan, I don’t really like watching it, I don’t follow it, and I don’t really care if I see it or not. But, that said, it was a great experience. The MCG, was almost full, they got us in and out with minimal fuss, and it was pretty amazing to watch the guys out there putting everything they had into this iconic game. 83,000 people, no agro, lots of passion, and I really enjoyed the whole day. We all ended the day at a cool little restaurant near the Casino, to celebrate, one last time, the Birthday week. More food, more drinks, and after being amongst so many people all day, I was absolutely exhausted. What a massive week! 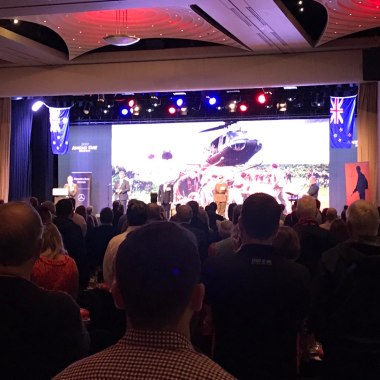 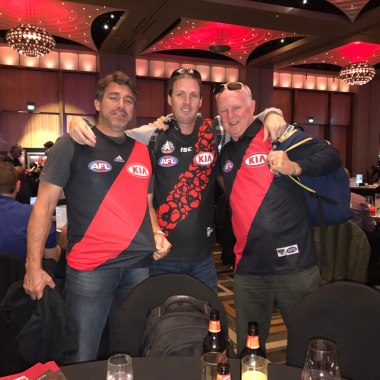 Brunch at the Crown was fantastic. Lots of ANZAC Vets, great food and pre-game drinks. Some Essendon supporters from our table. 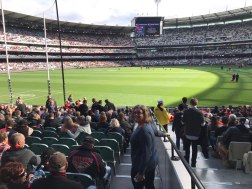 The rain started during the pre-game formalities and the first quarter, but that was all we got. 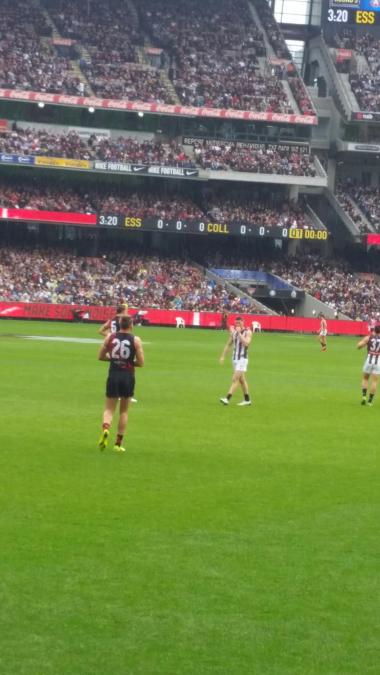 We had fantastic seats, super close to the action. Bill was struggling with his poncho, but survived the downpour.

Great family week everybody. The last dinner/drinks for the Birthday Week. Cheers Steve, here’s to many more, but now we all need a rest hey?

Wednesday – The others head home, and Will, Bill and I just chill out and relax for one more day. Washing, packing and preparing for the next part of this adventure. Tomorrow, we all depart at 10am. Bill flies back to Perth, we’ve organised an Uber (we’ve used them heaps here, they are really cheap usually, and have been great.) to take him to the airport, as he wouldn’t get on the back of Will’s bike. Why not hey? Why not? So we’ll wave him off, and get back on the bikes to head out of Melbourne. Where to next?