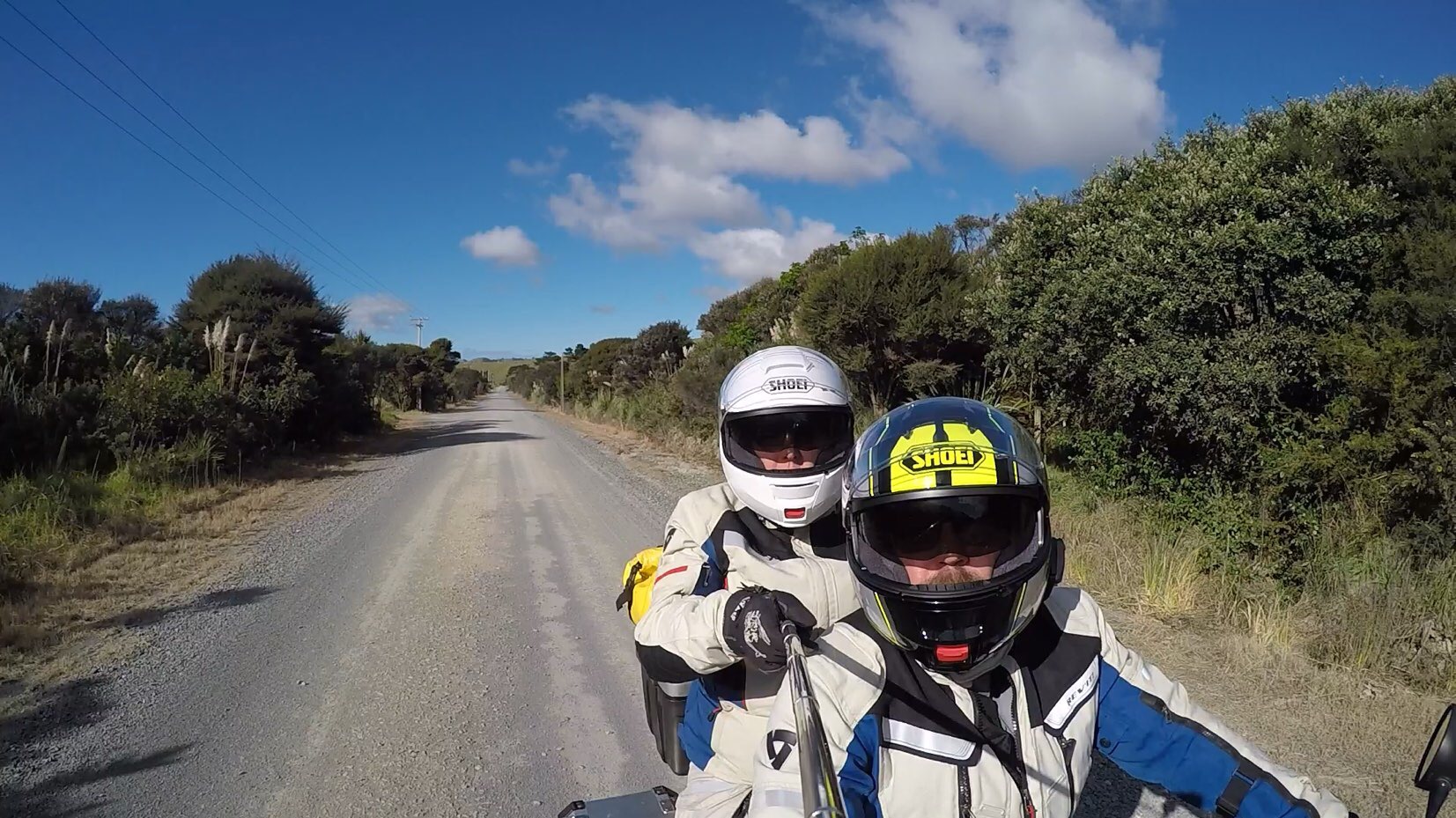 Hamilton to Tauranga to Auckland to Matakana
322kms by car, 60kms by bike.

Up again bright (well foggy) and early, as we have a big day of driving and it has been choreographed to within an inch of our lives. So we force ourselves up just after 7am, and it is still bloody cold. The paddocks are icy, and the clouds are low. Kids get sorted for school, and us adults get sorted for work and, well other stuff. Coffee, last chats, and massive thanks to both Adrian and Lil, for helping us get organised for this last week. Can’t put into words how thankful we are for everything. Lovely, lovely relatives. All different, but all so giving and accepting.

Some time after 8am, we got in the old red Postie van, and programmed Stupid Destiny GPS, for Uncle Davids place in Tauranga. Off we go on leg 1. We are delivering the van back, then Aunty Dianne is picking us up from Dave’s, and driving us to North Shore, Auckland, to collect our bike. Back through the Kaimai’s, on a sunny, cool day, and we recognise our route. Nothing new here, today! Almost there, a car is sticking with us as we go slowly up the hills. It could easily pass us, it is a much newer, more modern, more powerful, little car, but it just fits in behind us, and when we pull in to fill the van, it does too. Huh, it’s Aunty Di! Ha ha ha, fancy that. So we all just head to Dave’s, who is not home, so we break in and make ourselves a quick cuppa, as phase one is complete. Awesome!

All my fantastic relo’s. Thank so much everyone, you’ve totally made our journey.

Phase two, was getting to Auckland, so we chose a route we hadn’t been on, and it was great. Up the number 2 highway, to Waihi, then stick with it through the Karangahaki gorge, which was beautiful. We came out and had a quick pit stop in Paeroa. Apparently they make a drink with water from a natural spring, with natural soda in it, mixed with lemon. I didn’t try it, Aunty Di didn’t say positive and inspiring things about it. From here, we drove across the Hauraki Planes. Once these plains were covered in peat. Now they are cleared, and full of cows. It is very wet and swampy still, so looks bloody hard work. Lucky the cows don’t care about wet feet. After a quick lunch stop at Subway on the number one highway, it was straightforward to North Shore, and CycleSpot, where we picked up our bike. 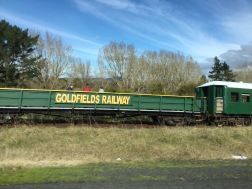 Aunty Di saved our bacon today, as we were originally having to drive the old red beast up, then ride and drive bike and bus back to Tauranga, stay the night, then ride back through Auckland and into the Northland. So a whole day would have been gone. Thank you so much Aunty Di, owe you big time. Big time!

Ferg, at CycleSpot, was fantastic, and had everything sorted. All we had to do was pack our stuff into the panniers, get our gear on, sign our lives away, and get on. Okay, now I have hit a snag! The bike is a BMW GS1200 Adventure. It’s frickin giant. To me, anyway. Ever so slightly taller for Will, but no problem. As I am moderately affected by ducks disease (my legs are short), it was challenging, to say the least. Once on, bloody comfortable. I have a nice high rear box, that acts nicely as a back rest, and the seat is not too hard. Cool. So long as I don’t have to get off too much.

No worries about getting dressed in public after our India experience.

At around 3:30pm, we chugged out and found our way onto highway one, heading north. There is nowhere on the bike for Stupid Destiny, so she is in my pocket, so I can check her regularly. Only issue is, the touch screen doesn’t work with my gloves on, so I have to take one off to do stuff. Lots of fun. It wasn’t a tough route anyway, as we just wanted to get north of the city, and get a start on the bike. So plan A, was Orewa, too soon. Plan B was Wairewa, also too soon. Hmmm, just go a bit further, and try remember a few names Ferg had mentioned.

As we rode through the twists and turns, we passed a roadside rest, where we spotted about 10 chickens, eating rubbish and fossicking around. We have been told, people will dump there unwanted chickens in the bush, instead of giving them away or killing them. This is extreme free ranging. Maybe future backpackers won’t have to buy eggs, they can just find some free ranging chickens, and find some eggs in the bush? Well, as they are the only wildlife we have seen so far, they might become the new Kiwi!

Anyway, we came to an intersection, with a few options, and one heading off to the right, struck a chord, but we were in the wrong lane. Bugger! Okay, we’ll do a Uwee, and head back. The turn came about at a service station, so we got fuel, and I had my first go at dismounting. Ha ha ha ha, by gee by jingo, wish you could have seen it. Getting my left leg to the ground, simple, no probs. Right leg, at a 90C angle to my body, across two solid boxes, and a very comfy seat, how the fuck do I get that off there? Try to shuffle my left leg away from the bike, (whilst trying not to put weight on the bike, so Will can still hold it), okay, now bend the right leg at the knee and turn the body to the left. That should do it! Nope, bloody right leg is now scrunched up, still at 90C angle to the body, and stuck on the left box. Shit, now what. Stop laughing, more wriggling, and finally, my foot flops off to the ground. Lucky not to fall on my face, and pleased there was only one guy watching this most non-elegant swan lake attempt. Will can now casually hop off and fill the bike. I checked the IPad and GPS, and had an easy plan to the nearest motel.

They don’t make very high curbs here in NZ, I need all the help I can get.

A nice little town, with a newly refurbished motel, a few dinner choices, and we are done for today. All phases successfully completed. Free Wifi, so I could sort tomorrow’s route, a very short walk to the Pub for dinner, and a lovely hot shower. A very successful day, with a minimum of hitches. Crank up the heater, and good night.

No need to rush out of bed, we have no breakfast. So a couple of hot coffees, relax in bed and program the Stupid GPS, as it won’t take us where I want to go. It keeps putting us on the highway one, and we want to hug the coast as much as possible. So using the IPad and Google maps, I picked the route, then put it into ol’ Stupid Destiny. By ten, we were out the front, packed and chatting to the manager. Lovely people, and some good insight into our journey today. So off we go. Oh, and a nice older couple had a good chuckle as they watched the ballet, as I tried to get on. “You need a step ladder”, the lady laughed. It’s not just funny, I bloody well do! At least it is an absolute cracker of a day. The sun was warm, no wind, and some great roads ahead.

Our first stop, was Leigh, a nice little town at the top of some cliffs. No real beach here, but a nice little cafe, where we could get some food. Brunch was needed, so we stopped and had a Bacon and Egg butty! “What’s a Butty?” Will asks. A bloody sanger, you dodo! “Is it toasted?”, well, not usually, but for you, no worries. It was good. Just enough to keep us going. Lucky, as the next bit of road had two kilometres of gravel. Oops, bit soon for the hard stuff, but got to do it eventually. After the scary, down the mountain, gravel section, we had a choice to make! Carry on the boring, sealed road, or take a right turn, onto a gravel road, that would be a bit more challenging, but more sights and fun. Will was now feeling okay on the bike, after the tough 2 Kay down hill, so we chose harder over boring. GoPro on, then? 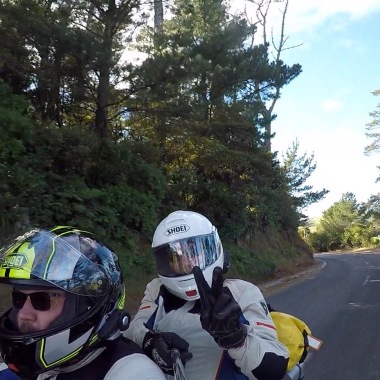 After a good Bacon and Egg Butty, the gravel was a cinch, hey Will?

Eventually, the gravel brought us to a little school, called Tomarata, and then we followed the now sealed road, through to Mangawhai. A chance for a toilet break, and to check the GPS, which had decided it was almost out of power. Gggrrrrrrr, can’t they make one that has a battery that lasts at least 8hrs on the go? We had a short break, got the next lot of directions, bought some supplies and carried on. A great section of road. Twisting and turning, good sealed road, and light traffic. Very scenic, and we had a ball.

The second gravel road was flatter and firmer, no probs, the BMW is made for this stuff. Fun with the GoPro, and Laing Beach, very nice.

We passed through Laing Beach, and came to Waipu beach, which went for miles. Beautiful white beach, like home, that was stunning. We stopped again, probably so I could practice the off and on manoeuvres, and drank the coffees Will had prepared in our thermos flasks. We had a bit of a snack, of Rivita crackers, with canned Teriaki Chicken pieces. Not too bad people, good option if you can’t keep meat cold, these little tins are okay.

Onwards we blast, enjoying the fabulous day, and the gorgeous scenery. After Waipu, we came out onto the number one highway. From here, we got to just blast it along the straightish roads, and I almost nodded off for a nap. Just coming into the large town of Whangarai, good Ol’ Stupid Destiny, completely died. Typical! Luckily, I had had a good look at the route through this town, and could direct us to the completely wrong road, heading to a dead end, where we could stop, get attacked by wild, “free range” roosters, use the IPad to check the correct route, and get back on track! Good work team! Eventually, just after 3ish, we were heading out towards Ngunguru. I’d checked accommodation options here, so it was plan A, and Tutukaka the second one. 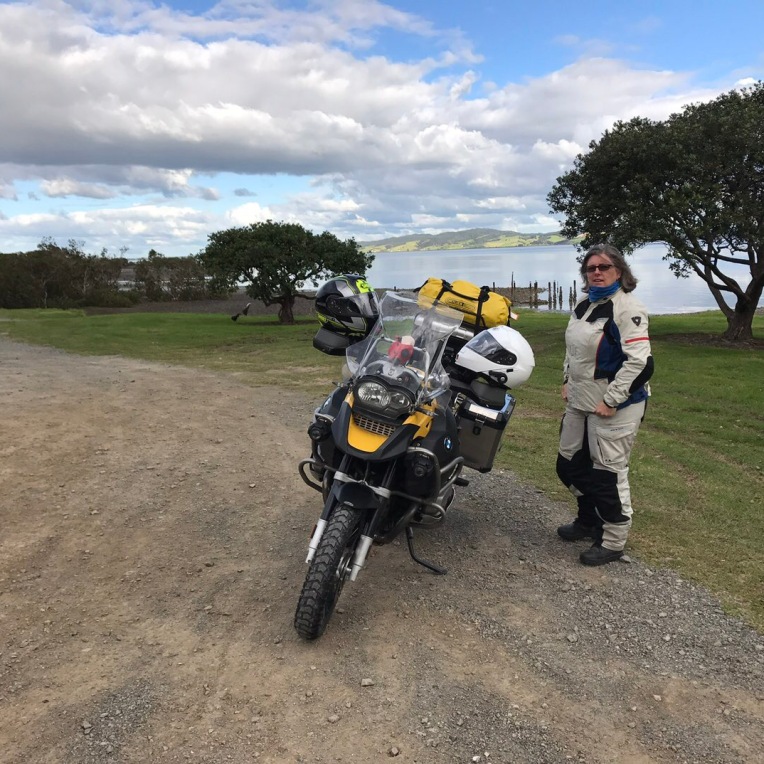 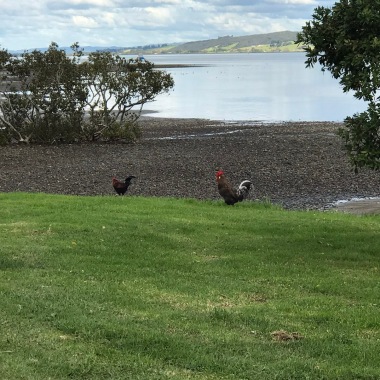 Could be worse places to have a “Cock” up! He he he. 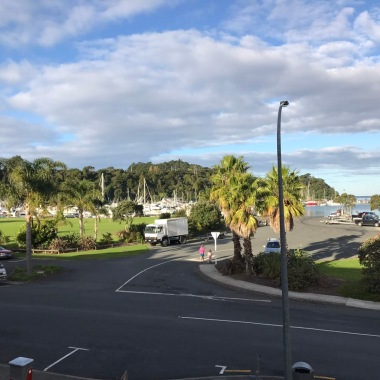 Great view of the marina, for the cheaper price of a room with a bush view. Good deal.

A great ride today, with perfect weather, and a very relaxed time had by me! Will did a great job of making sure we arrived safe and sound, and with only a few hiccups, I managed to secure us in the Quality Hotel Oceans, here at Tutukaka. Loving the bike riding so far, and if this weather holds, it might just be Frickin Awesome!