The sky didn’t look right this morning, grey and humid. The tent was a bit wet from the moisture in the air, and wasn’t going to dry in this situation, as there was no wind. So we sat around the fire again, with the other tent dwellers, and ate our last nuts and berries. Eventually, we got motivated to pack up, and make our move towards Proserpine and Airely Beach. It has been a good visit.

As we came back out to the valley, the clouds were dispersing and the sun was trying to win through. Come on the sun. It was a beautiful riding temperature though. When I was chatting to Peter, on day one at the Bushcamp, he showed me a “short cut” from Gargett, on the Mackay Eungella road, through the hills to Mount Ossa, where we would turn left onto Highway number one to head to Proserpine. He said it would be too slow going for him with the van, but I thought it looked ideal for us, especially if the big vans won’t go on it. So left it was, at Gargett. It was a great little 55kms, a really enjoyable ride. Quiet, narrow road weaving past cane fields, farms and winding around the hills. Thanks Pete, made the day’s ride.

Once out on the stupid A1, things got pretty boring, with cars, trucks and vans, all powering along, getting right up my butt, trying to force me to go faster. Not happening folks, just not happening. I casually weaved around the big bumps and divots in the road, while they smashed into them, and I cruised along at my happy speed (which is the speed limit, by the way). Eventually they would pass me, and do the same to Will, until they could pass him too. Bloody crazy! Just calculate the reality of your 5km/hr speed increase, and realise it isn’t worth the stress you are giving yourself. You are still going to be late! Late is late, doesn’t matter by how much!

The wind was picking up, and smashing us from the front right hand side, and it was getting a bit tedious, so we pulled into the next service station, which happened to be the BP at Bloomsbury, and got fuel and some lunch. A nice fresh sandwich, and cool drink. We relaxed and refreshed, got to “Survive This Drive” , and took off to complete the last 50 odd kays for the day. We’ve been to Proserpine quite a long time ago, and it has changed a lot. We remember it being a bit scungey, and small, but it had changed to be much bigger, and less scungey. We turned off to Airely Beach, and immediately noticed the trees on the hills had considerably less leaves than they should. Cyclone Debbie, reeked havoc here. It will be interesting to see the town and how it is going in the aftermath.

Ol Wazza from the Bushcamp, has put us onto his mate Bryan, at Bush Village, which has little cabins at a good price, so we can dry and wash our gear. The downside of few clothes, is you need to wash them more often. Onto our last clean stuff again. Bush Village is in a good spot, with shops within walking distance, and a nice quiet bushy setting. Bryan is a nice bloke who is coming to the end of his time in the customer service industry, and is keen to live the quiet life somewhere else. Don’t blame him, it is tough being happy all the time.

These cute little Rainbow Lorikeets were having a feed and a chat. Funny birds.

Wednesday morning was lay in, relax, and do the washing. We didn’t have anything for breakfast, or what we did have we didn’t want to eat, so once we had the washing on the line, we hopped on the old Mule, and took a tour of the town. Last time we were here, in 2013, there was lots of building going on, and the place has grown heaps. It’s still nice and relaxed, with plenty of young, beautiful people to look at. We parked ourselves at a nice cafe, and had a good coffee and cheap breakfast. It was really good. We had a wander down the Main Street, then rode around some more. We spotted a massive Woolworths in town that definitely wasn’t there last time. As we did some shopping, Will discovered that, when Cyclone Debbie hit, Woolworths gave away 2 free bags of ice every day, for a week, to any local who needed it, and were the first to get trucks through with supplies. Good work! 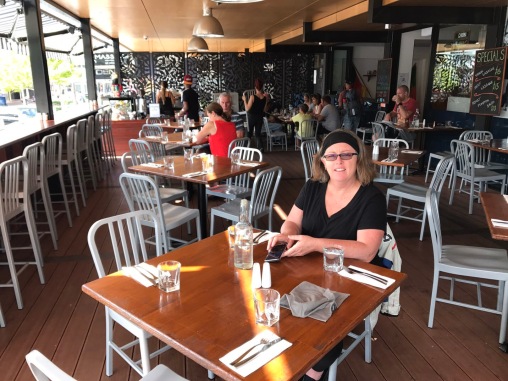 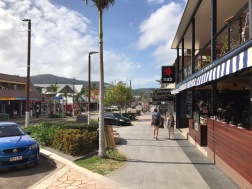 Another good look around Airely, and it is still nice, even if it has grown heaps.

The rest of the day was spent chatting to Bryan and Jude, the owners of our accommodation, and I got some interesting information from Jude about arthritis and osteoporosis. She has been suffering with the same problems as me for about 15 years, and has given me some things to look into. They have helped her be pain free for the last 2 yrs, so worth investigating. A dinner of flat bread pizzas, to use up our old food, and to bed at a reasonable time. It’s pretty warm tonight and some rain is forecast, let’s hope they are wrong.