A big climbing day today, with a couple of killer hills to get over. The first one was right on the border of Alberta and British Columbia. We reached that after 12kms of climbing, but it was a reasonable gradient up to 1680 mtrs. It was pretty cool morning, so we all had a few extra layers on, and I had my winter gloves, and socks on. We stopped for a short break at the border. 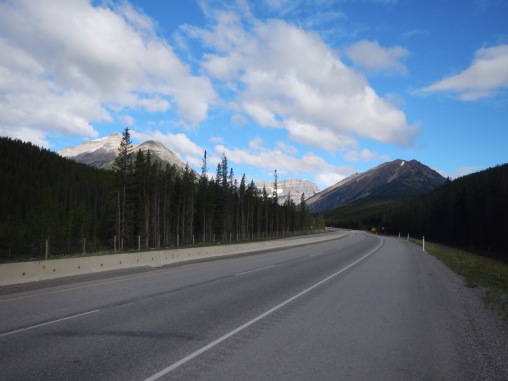 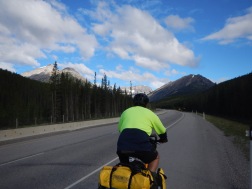 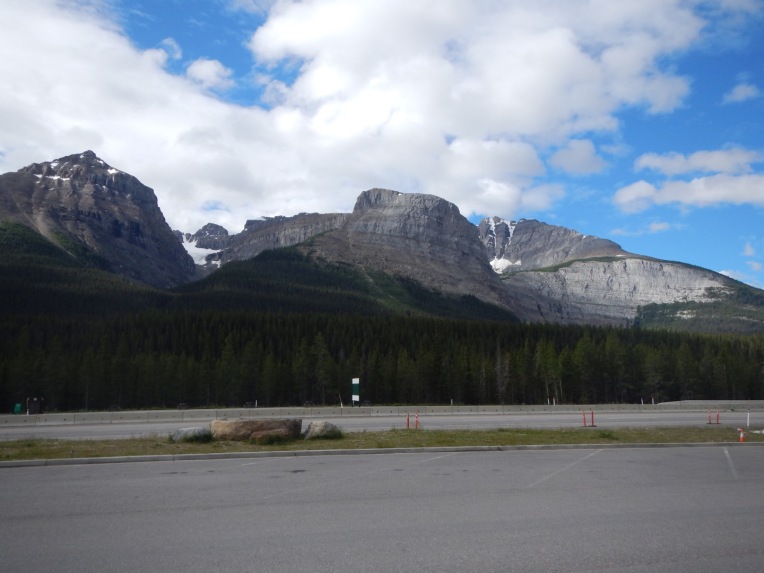 The first section didn’t seem too hard, giving me confidence. You can see two glaciers on either side of the hill. On the left, the Bow river heads east, on the right, the Columbia river runs to the west.

Of course, there is always some sort of downhill run after any climb, and we had a 12km lovely run down to Fields (1256 mtrs), where we stopped for a coffee and to use the clean toilets of the visitors centre. It was starting to warm up at last, and the views were spectacular. 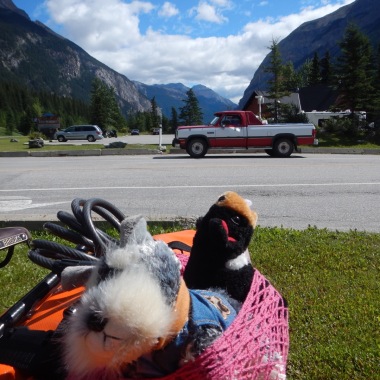 Down is so good, and the traffic is very respectful on most occasions. Fields is a very cute village in the Kicking Horse valley.

From Fields, it was a bit of a flat ride, before the climbing started. There were nice downhills after each one, which was satisfying, and on one in particular, we reached speeds in the 60’s. At some point a man in a pick up, yelled to me I’d dropped something up there. Gees, that’s too bad, stuffed if I’m riding back up this mongrel. Luckily it was just my plastic bag to cover my seat. This time! Another long slow climb, and an even faster decline, and I lost something important. I didn’t notice until I reached the summit of Kicking Horse Pass, some time later.

Nice run so down hill, some beef jerky to give some more energy before the big climb, and “check your brakes” signs are all good things for cyclists.

Kicking Horse Pass, was brutal. 1st gear, on a resurfaced, no lines, double lane steep, steep, hill, with mega trucks, RV’s and massive pick up trucks, pushing past. Add to this a small or no shoulder, and lots of gravel and debri, 30 plus degrees, and it was tough. John was miles out in front of us three, but we did find out he walked the last of it. Art lost momentum in the debri, and had no choice but to walk, Will was almost there, but had to stop for Art, and walked the last of it. Me, I somehow managed to ride the whole thing. I stopped several times to catch some oxygen, and wet my dry, spit covered lips, but riding is easier than walking for me. Man was that hard getting back up to 1627 meters above sea level. 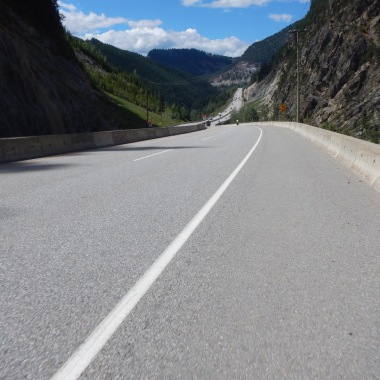 No photos slogging it up, except for the Bighorn Mountain sheep, that scared the bee-geebies out of me while I was huffing and puffing.

The run down was speedy and spectacular. We were all going the speed limit, so we’re able to command our own space in the lane. We weren’t holding anyone up, and at one point had to all brake for a slow semi. Exhausted and exhilarated, we rolled into Golden and found the hostel Art had booked for us. It looked great. Dreamcarcher Hostel. It used to be a strip club. The boys did shopping, I had a much needed shower, we did washing, cooked dinner, and crashed out. Totally spent. I think I need a rest day.

Will and I really struggled this morning, we wanted a rest day, but thought we could push through the next two days, then have one. Today was going to be even bigger than yesterday, for climbing, and we had 80kms to do. Oh well, let’s give our best shot. Art and John didn’t seem phased at all, and were keen as mustard. Will made us bacon and eggs, early, so we left in the cool morning. A nice flat start, then the rolling hills started, Then they just got longer and longer.

I was seriously struggling, feeling super fatigued, and I was pretty certain, I would not make the distance today. At lunch time, after 40kms, I decided to try and hitch a ride to the top of the Pass. Both Art and John had hitched rides on previous rides, and assured me it wouldn’t be hard to get a lift. So those two headed off to tackle Rogers Pass, and Will stayed with me, intending to get me a ride and then carry on himself. Great plan. After an hour standing on the roadside, thumb out looking in need, we decided to ride a bit further and try a different spot. It was awful! I lost my shit, fatigued and upset about not getting a ride, I broke down. Poor Will, he just had to show me some understanding, and come up with another plan. We tried a couple more times, about 2hrs in all, and no ride. We had pushed out another 10kms, and pulled off into a side road, heading to a lakeside resort 5kms down the hill. We had no phone reception at all, so no maps, and no options, so we rode the 5 kays down the gravel road to Kinbasket Resort. There, we were greeted by Rick, the owner, with a huge grin on his face, telling us what we needed to hear. Yes we could stay, and to help us sleep better, he’d run us back up to the highway at 7am in the morning. Oh my god, thank you! I almost cried again.

He gave us a little cabin, with basic facilities, clean sheets, and a magnificent view. Kinbasket Lake, is 240kms long, and is beautiful. There are also Hummingbirds here, and we watched them around the office. Amazing little birds. So we tidied ourselves up, cooked some rice and chicken, and I was out like a light before 8pm. Totally, totally exhausted, after 5 hard days in a row. It is not our usual MO to bust out such big days in the early stages, but we are doing it. I guess I paid the price, I hope I can conquer the pass tomorrow.

What a great spot. Nature and nurture, just what I needed. And our first ice cream, which was delicious. If you want a nice break away, check it out at Kinbasket Lake Resort

One thought on “Up Kicking Horse, Beaten By Roger”