Yesterday got pretty bloody hot, so we got up even earlier to get a good head start on it today. It’s Johns Birthday today, and he doesn’t know we know. His wife Katie messaged Art and gave us the heads up. We surprised him with a little sing a long to “When I’m 64”. He was pretty happy, and it was a good start to the day. We had about 46 kays to ride to Kamloops, where we’d have lunch and get stocked up for the next couple of days. It was a bit of an up hill ride, but not too bad, and it was just getting hot when we arrived in Kamloops. It is a pretty big place, and lots of traffic.

We stopped at MacDonalds, on the outskirts, after stocking up on groceries, then Art headed off to find the Atmosphere camping store. He’d lost his mug and some cutlery somewhere along the line. So after we refilled our water bottles at Mickey D’s, with nice cold water, the rest of us headed off too. Before long, it became apparent, that we were not allowed to carry on the Number One, and had to detour through town on Columbia Street, which would meet up with the highway about 10kms further on. We got about 2 kilometres along the street, and watched it, very rapidly increase in gradient, to a hideous degree. It was now about 1pm, and steaming hot, 39C. Holy mother of God, this was ridiculous. Will, John and I sweated our way up this most horrible street, pushing our heavy beasts, swearing, dripping, heaving and panting. We stopped in someone’s driveway, in the shade, to drink gallons of water, and recover. We messaged Art, who in return, told us he had done the same, and had made it to the Atmosphere store, close to the top. Fuck! There is more to go? We were looking at a bend, hoping it flattened out, but it didn’t. I managed to ride the rest, in several episodes, as walking was way more painful for me. After a few more shaded drink stops, we managed to find Art at the camp store, where Will and I had decided we would not be riding anymore today. It was over 40C now, and that hill had wrecked us. Luckily, Art and John were on board with that, but thought we might be able to scab a lift the last 40 kays to Savona. 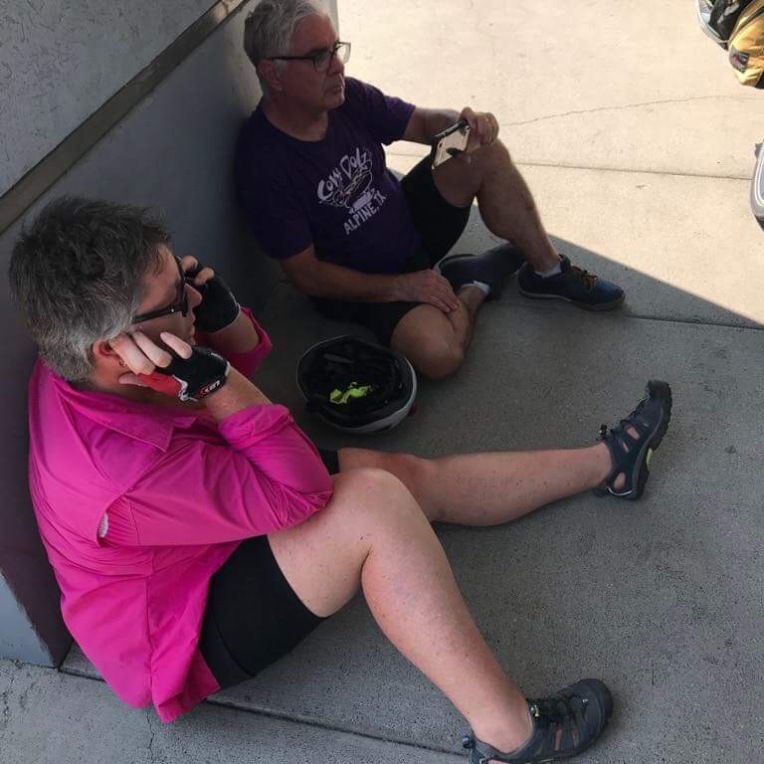 Like a bunch of homeless people, we hide in what ever shade we can to try figure out a plan.

Now Art has been fantastic with organising campgrounds and stuff, so far, but today we saw him in real Super Art mode. He chatted to the camp store staff, mentioned our predicament, rang a few numbers, and eventually came across a customer in the store, Dave, who had a massive pick up truck, and equipment trailer, and was heading in our direction. He would take us to the highest point, leaving us a great view of the lake, and a 10km downhill ride to our campground. Dave you are a saint, and your Karma bank is overflowing.

As we drove along our cycle route, we were even happier to have a ride, it was just up hill, and more uphill. There was no way I would have made that today in this heat. But Dave had come through, and dropped us at the top, with an absolutely awesome run down to Savona. It was hard to take pics on the bike, at over 50km/hr, it is not a good idea to take your hands off the bars. The views were beautiful, but it was a hot, hot run down. We made it to the campground, and luckily they had space for us.

Look how happy we are in the huge air conditioned comfortable pickup. 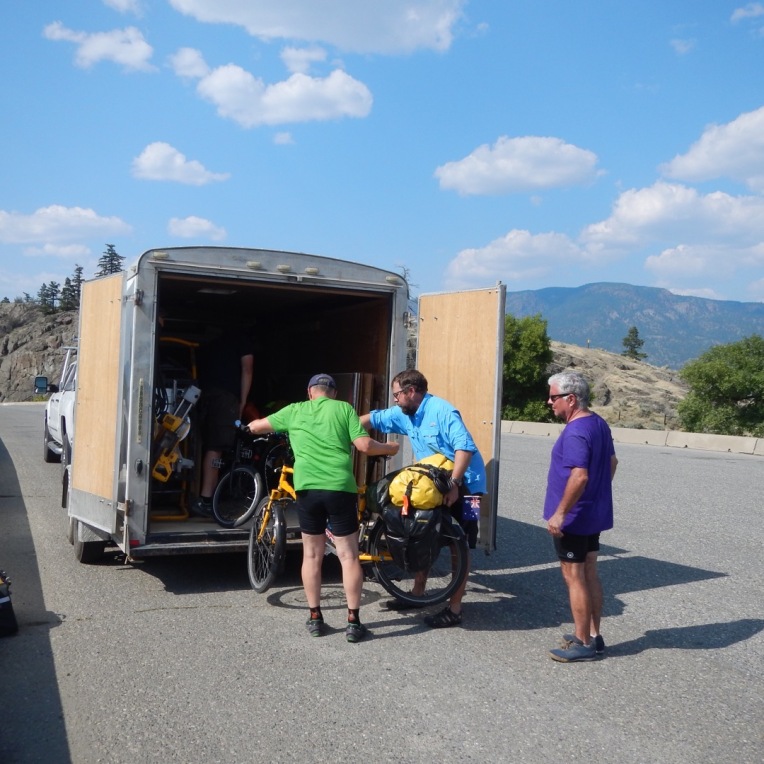 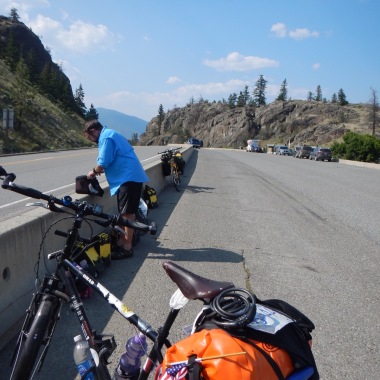 At the top, we had a fabulous, hazy view, of Lake Kamloops. We unloaded the bikes, said another thank you to Dave, who refused all offers of money, and started the Happy roll down. 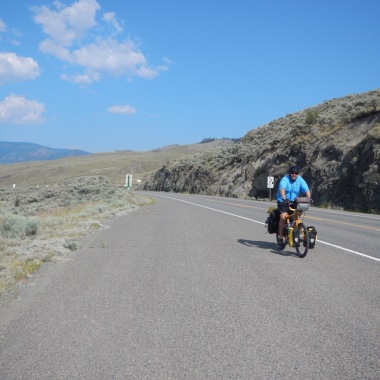 One photo at the start, and one I pulled up for, after the biggest roll. Nice.

A couple of fellow cycle tourers, following us on Crazyguyonabike, Al and Sheila, had been following our blog, and as they lived along our route, they had arranged to come visit us at Savona. Another reason we had to get here. They had offered to bring us pizza, which was a great idea for another birthday surprise for John. They arrived in a little smart car, and we told John, our dinner had arrived. He said “Whaaat?” “It’s your birthday pizza delivery.” “No, you didn’t? How did you do this?” It was great, Al and Sheila came through with Pizza and chips, and some fantastic stories. It was so great to meet them in person, and super lovely of them to make the huge effort to come and see us. It was a beautiful end to a tough day.

A fantastic evening, with cold beer, hot wine, pizza and friends. Thank you so much everybody.

These starts are getting earlier and earlier, but hey, it is getting hotter and hotter. It was a gorgeous morning, and we got moving pretty quick. We are pretty much following the Thompson river, and should be on the way down to the coast. But I don’t know when that is going to happen, because we went straight uphill for the first 20kms. Bloody hell! Yeah, great views, but hard to see through the sweat in my eyes. Luckily we found a nice roadhouse not far from this spot, and stopped for a juice and a boiled egg. I kid you not, they sold boiled eggs. 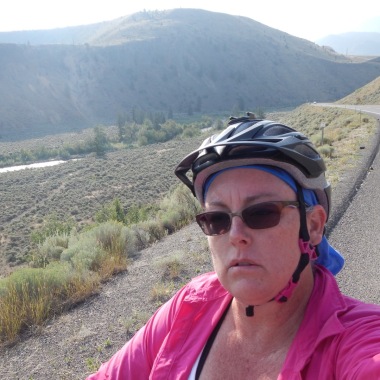 Another crazy bugger cycling this road in the other direction. I’ve lost my happy morning attitude already. Already hot and sweaty, and it’s still early.

There was a bit of soft down hill, but so much up. There was even a stretch, a long stretch, that we thought was flat, and even though we had a slight head wind, we couldn’t believe how much we were struggling. Looking forward, it looked flat, looking backward, we were actually riding up hill. Bugger. We were in the full sun, it was bloody hot, and a hot wind didn’t help. We were really getting through the water. Art and John, were quite a way in front of us, as we were taking lots of small rest breaks, but we found them resting in some shade at a rest stop. While we were all resting in the shade, a nice couple who had seen us out on the road, offered us some water. We needed it. Thank you!

As we got closer to Spences Bridge, we were really on a big roller coaster ride. The hills up were hard, the downs were longer and helpful, but it was now over 40C, and we were all struggling. We didn’t even notice a lot of the scenery because we were just concentrating on making it.

Oh my god, a yellow sign of joy. No way am I gearing down. Roll Betty, roll!

A big slow push up hill, I was starting to dig super deep, I was sweating, panting and wishing for a cold cold drink. Our water was hot. Over the rise, I spot a fruit stall, then I spot Wills bike, so in I go. Then I get handed a cool homemade lemonade. Perfect. We all stopped there, 7kms from town, at the top of a hill, drank lemonade and ate fresh peaches. Just what we needed. 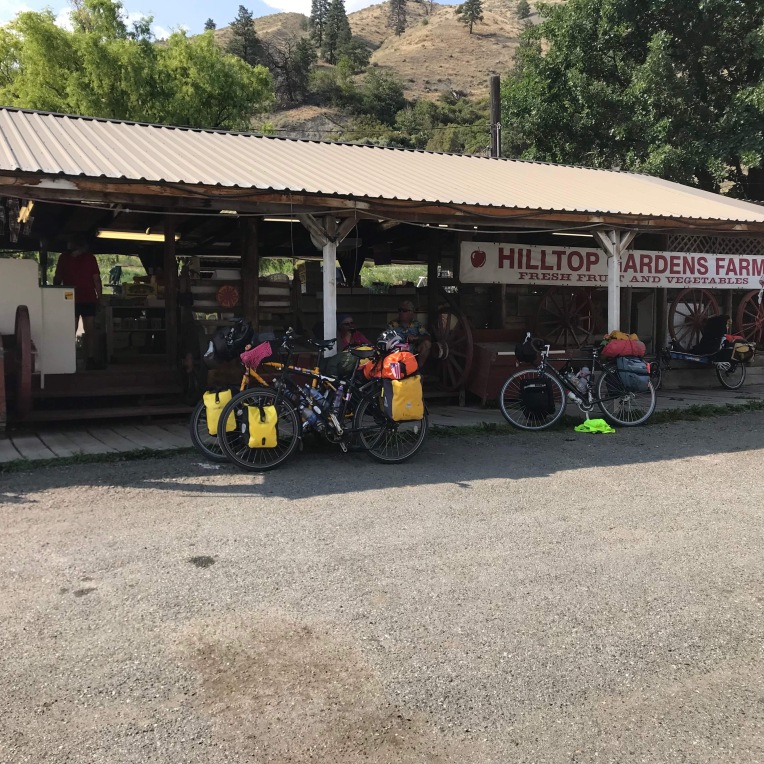 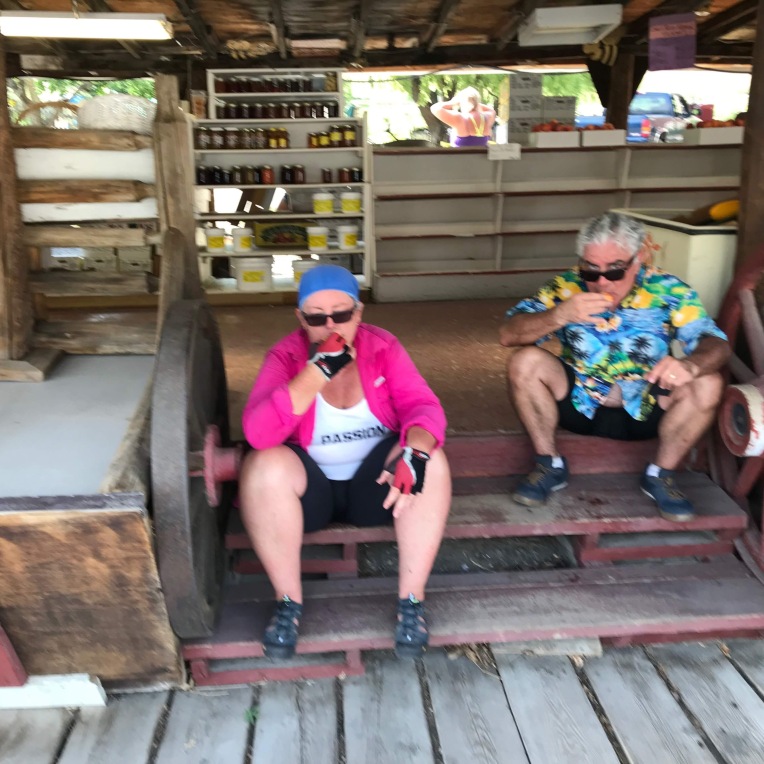 Never has a peach tasted so good. It was cool and juicy, and full of natural sugar. Just enough to get me over the line.

Down to town was a nice fast ride, only having to stop for a wayward mountain sheep. She was eating in the ditch by the road, not bothered by the traffic, until we snuck up on her. At first she ran out onto the road, and we all thought she was going to get mushed by a huge truck, but she recovered, turn and leaped vertically, about 3 meters up the cliff face to safety. Unbelievable! Phew, I did not want to see her become roadkill in front of me.

All of us were holding our breath when the sheep ran onto the highway, but happy endings prevail.

Finally, all sweated out and exhausted, we arrived at The Log Pub, where we met Laurie and John. They have had this iconic pub, where they have motorbike burnout comps in the doorway, for 22 years. She gave us cold water, cold beer, and our room keys for The Baits motel. Oh gees, are we done for? Visions of The Shining, who cares, I’m so buggered, I won’t hear or feel a thing. Before we have another beer, we better go clean up, and cool off, so we head over to the dodgy looking motel. The rooms are dated, but clean, and Laurie had the tired old aircons going to try help us. What a day, but we made it again. Unbelievable!

8 thoughts on “A Hot, Hard, But Happy Birthday”