Most of us had a late start this morning, we were sluggish. A trio of young guys, hiking had stayed up and drank their fill, and were the last to arise. They were well behaved, but got through some Bourbon and beers. Eric was gone before we all got up, I hope he stays safe and well. Most of us were heading south, so I’m sure we’ll run into other a few times. Well not, the American guy, he is doing 80-100kms/day, and the English guy is heading inland to Portland. So that leaves Warren, who is almost living on his bike, and just goes where the weather and his heart takes him. As the three of us were heading for Nehalem and the State Park, we took off together.

A cool change has slipped in, and so has the sea mist. With lights flashing, and a good shoulder, it wasn’t a bad ride to Seaside. A search for gas canisters, some lunch, and a break, before we found the hills. Warren says he likes his junk food, and goes for the dollars burgers at McDonalds or Burger King. They also let you fill up your water.

At Cannon Beach, we separated from Warren, to head into the little tourist town. After all, it is quite famous for it’s beach, which has been featured in many movies, like The Goonies, Twilight and Point Break. As we rolled through the town, we spotted a brewery, but thought better of it. That was until we saw a familiar white helmet with coloured polka dots. We’d caught up with Carsten again somehow. Okay, just one beer, a quick hello, then we have to do groceries again, and climb the next two good long hills. 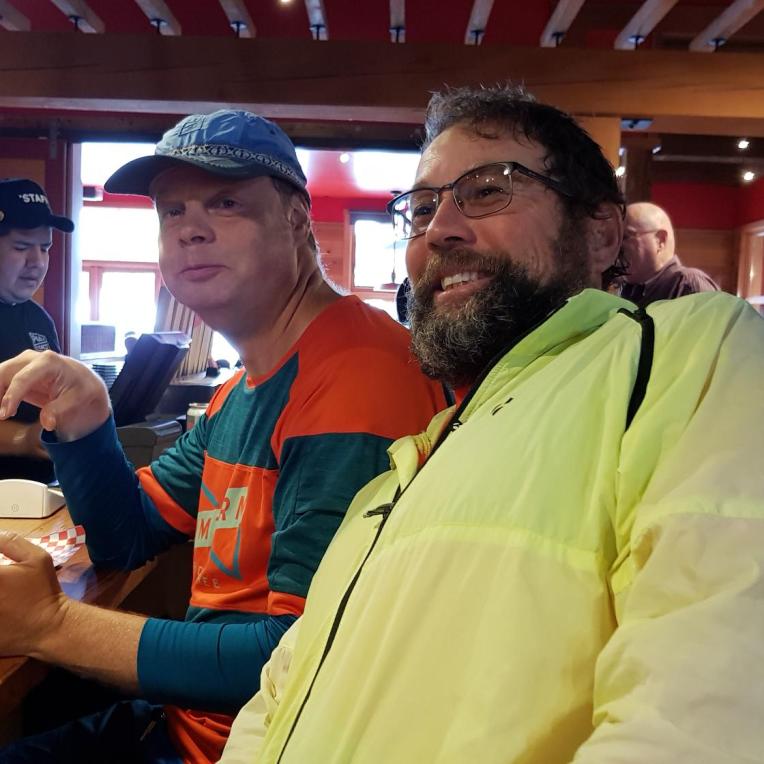 There were heaps of people on the beach, getting their photos and walking their dogs. It was a chilly day.

Us three headed off together, and all agreed that Cannon Beach was a nice town. Pity it was an overcast day. Stopping at the Fresh Foods store on the way out, it was my turn to shop. Bum! At least I can get what I want to make for dinner. Found some cheap pork, a Thai style simmer sauce in a sachet, and some Merlot in cute little cartons. What else? Oh yeah, beer. Two giant cans for Will. Through the checkout, the girl was quick and nice, but as I was wandering out I checked the price, and noticed the two beers were over $7 each. What? That price was for 6 cans. So I went back in playing the dumb Aussie, and asked the young man there, if it was correct. He said that they are only allowed to sell them in lots of six, and asked if I’d separated them. Yeah, of course, I’m not feeding Will’s habit! After a chat, it was decided that my only choice for cheap beer, was to get six. So I went out side and told Will the bad news. He’d have to carry the six giant cans of beer.

All up we had three big long climbs today, the first just before Cannon Beach. The second one was even longer, on a bridge with out a shoulder, and some beautiful scenery, oh and an uphill tunnel with no shoulder and a super narrow walkway. There was lots of traffic, again! Carsten stuck with us, and we all rode at similar paces. At the bridge, I stopped and lifted (hoiked) Betty up onto the safety of the walkway to get a cool picture of the other two. When I had to get going, it was a bit of a struggle. On the right hand turn, a barrier on my right and a drop to the road on my left, with fast moving cars. How to get started going up hill without getting run over is enough of a difficulty for me, now I’ve got added obstacles. What was I thinking? Just for stupid picture that might not even work. I’m not walking it, my knees are too sore. So I get on my bike, holding onto the barrier, and feet on the pedals, and shuffle with my right hand, and peddle, and shuffle and peddle, and shuffle and peddle, but balancing is not happening. Ugh, oh well, this is better than walking, but how funny must I look to the people zooming by in cars. One last attempt, and I got it, about 25 meters before then end….ha ha ha…un-co!

Further up, and we are getting pretty tired of climbing, and the road engineer bastards think it’s a crack, to smash out a tunnel, with no shoulder and a narrow walkway. Agh fuck ya! I’m walkin’ this crap! Will decides to do that too, but Carsten is riding it. Crazy German! Lights flashing, reflective gear on, and the “Safety” light button pressed. It was about 300 meters of tunnel, and even walking it was hard. Carsten did well, just to survive, with a long line of cars, RV’s and trucks behind him. We all were covered in sweat and took a break to recover before the last bit of climbing.

It was very nice at the top, and again it would be spectacular on a clear day. The downhill was super enjoyable, except that Carsten was a bit slower than me, so I had to pass him before we headed up again. But hey, it was okay, and just as we reached our campground, he disappeared down a side road. We carried onto the campground, where we found Warren, the American rider,and a few hikers. Will bought some fire wood, that was  just resting on my bags, and as I rode through the trees into the camp sites, the hikers yelled out congratulations to us, I turned to say thank you, turned back to the front, to see a stump just as I hit it and fell over. Aaarrggh! It had to happen, didn’t it.

A really awesome part of the coast, just not the best weather, but that is just how it goes here in Oregon.

Will laughed, Warren panicked, and I just laid there on my exhausted back. What an end to today’s ride. Stumped! Nevermind, it is a nice camp ground, even if we have to walk miles to the toilets again. Carsten arrived very soon after, then a couple of French guys, and a young guy from Washington State.  We lit a fire, and had a great night chatting with everyone, drinking too many beers and wine, and sharing our fire. 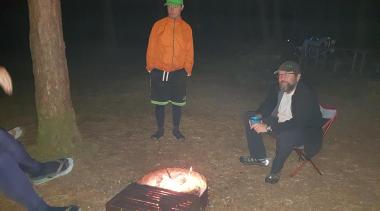 A damp cool morning, but with the promise of warming up. The hikers were gone, the American man was gone, but the rest of us moved a bit slower. Larry, the young 22yr old, is riding 1700 Miles in 40 days, with 7 non- riding days. He has to go back to College, and has planned a couple of baseball games to watch, so has a tight schedule. He is a nice guy, and a bit shy, but after we invited him to sit around our fire, he shared his story with us. Warren was staying another day here, Carsten was doing some sight seeing, and Larry was drying stuff, so we left first. We are all heading to Cape Lookout.

Larry just took up cycling again after about five years off, but plans to do more. Great idea. Our morning cleared up quick, and showed us some interesting views.

We had a nice cruise before stopping about 20 kays along for Dungeoness crab, oysters and corn. It was an interesting area, and the sun was trying hard to come out. The two French guys, Otto and Jeremy, who had hike about 1000 miles of the Pacific Coast Trail, before deciding they would have more time on a bike. They got to Vancouver, built their own bikes and started riding back south. Both look like they are mid to late 20’s. They arrived just as we were leaving, so after quick catch up, we’re off again. 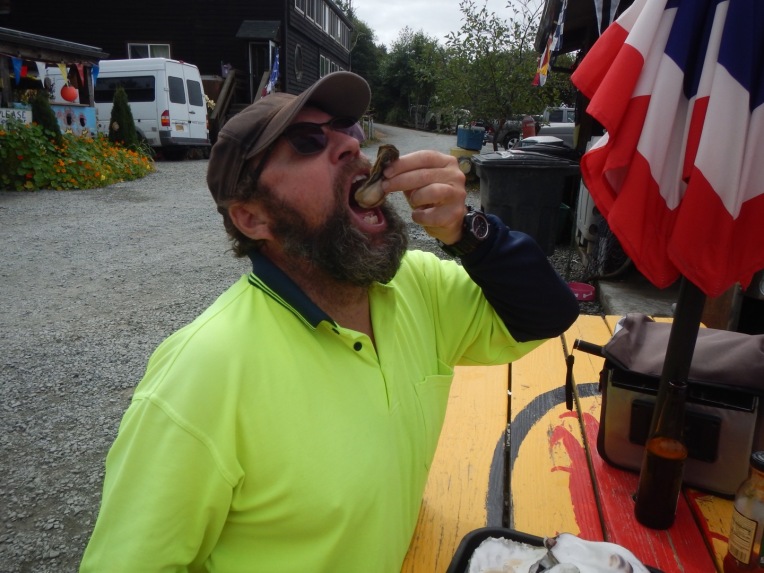 Mmm, I don’t mind seafood, but I’m not sure about cycling with a stomach full of it. I’ll have the corn. Some huge oysters, they’re not attractive are they?

We saw Larry ride past while we relaxed at lunch, but we caught him at Rockaway Beach, where he’d taken a short break. It didn’t take long for him to whizz passed us into the distance. The riding became a bit tougher, with a head wind, more traffic, and more ups and downs. Not long ones, just lots of them. It was quite scenic, and we had a very good shoulder, but we were both getting tired of the traffic, the noise, and the concentration.

At Tillamook, I spotted Larry at the Cheese factory (he’d told us that was a definite stop for him), and we lost any sort of shoulder. The area stunk like cow poop (well it is known for it’s Dairy industry and agriculture) and was not really a very good looking place. I was a bit over it all, so much so, that I looked for a hotel while Will bought groceries. Gee-zuzz, nothing! Just have to ride the next 18kms to the campground I guess.

It was a tough ride, with less than nothing for a shoulder, not even a gravel verge, lots of impatient drivers, and a bloody 3 kilometre climb just to top it off. We rolled into the Hiker Biker site at about 5:30pm, to find Carsten and a few other campers. After getting ourselves sorted, we showered (another cycle to the showers, and “short drop” toilets) and made a gourmet dinner with lots of good red meat, and lots of greens. We met more cyclists, a couple from the UK, and a local from Portland. Larry turned up around that time, and so did the two French guys. They all looked a bit tired. It was actually a harder day than we’d all expected. By the time we all got to bed, again it was a late night.

Carsten had taken a swim in the Pacific. Crazy German, it was cold, he said. I caught this naughty squirrel eating a hikers hot chocolate, while she was waiting for her water to boil. Don’t turn ya back hey?

One thought on “Sharing The Adventure.”