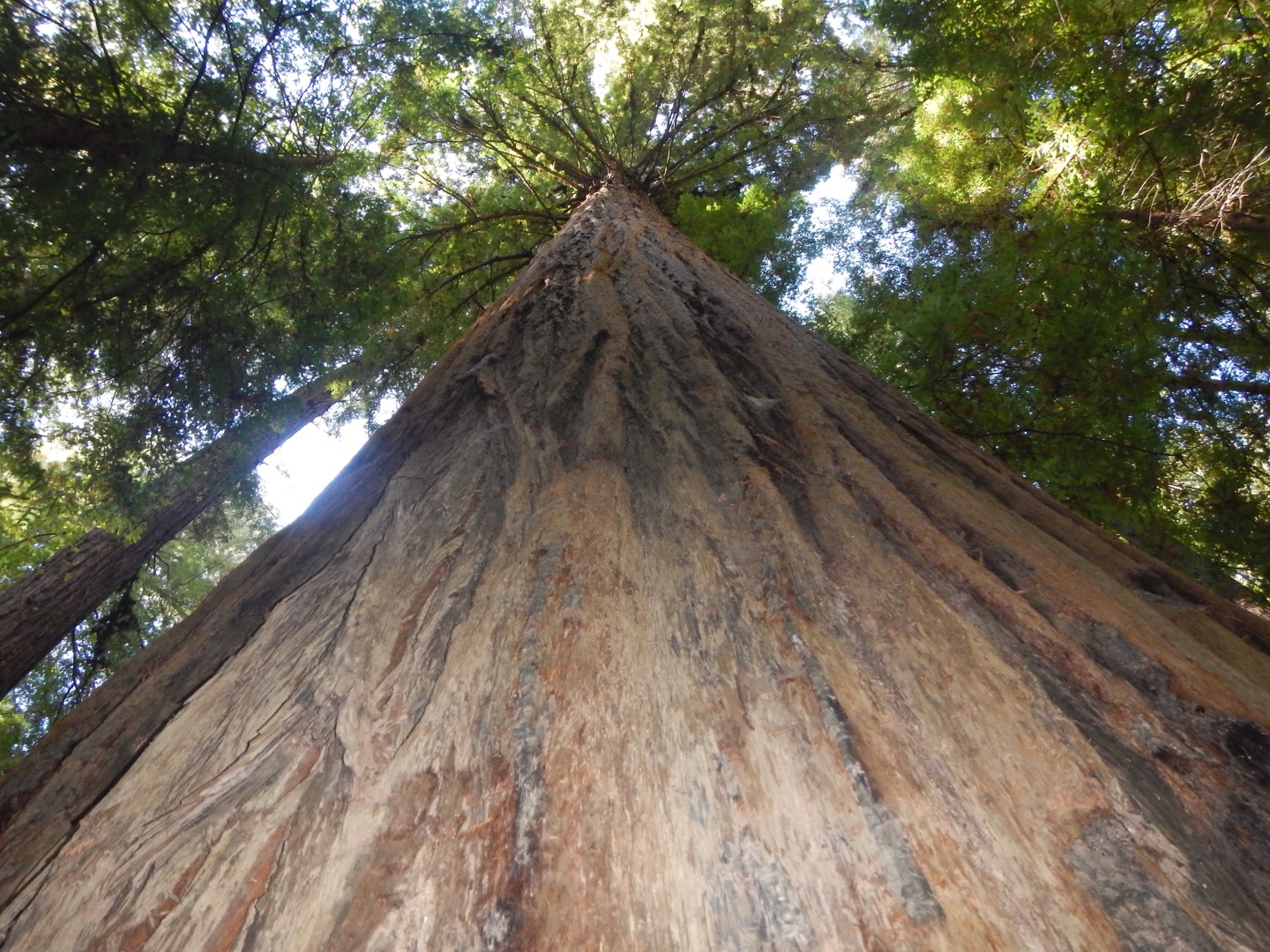 Now that was a Friday night to remember. So nice to meet local people and hear about their lives. Will and I had a good sleep in the loft of the studio, which doubles as an office for Danny. Waking up, we could look right out into the tree canopy, which was beautiful. It was a relaxing and sluggish morning, with a nice cooked breakfast and more great conversation with these guys, we didn’t get rolling until about 11:30am. Oops.

Luckily, we had planned a couple of short days, so we could be rested for an up coming mega day. So with not too far to go, and a good chunk of that distance on side roads and bike path, we didn’t stress the late start. As we rolled past Clam Beach, we were so happy we didn’t stay there. Ugh, we probably would have pushed on, it was not pretty.

The ride, however, was very quiet and enjoyable. The sun was shining, we had a slight tail wind, and some nice ocean views. Just past Clam Beach, there is a cycle path, called The Hammond Trail, that runs along the coast, and around the outskirts of McKinleyville, and then through “The Bottoms” (the flat farming lands) to Arcata. It was a very nice ride, and few vehicles of any sort. We watched the fog blowing in at McKinleyville, and by Arcata, it was sunny and clear. What a strange phenomenon. 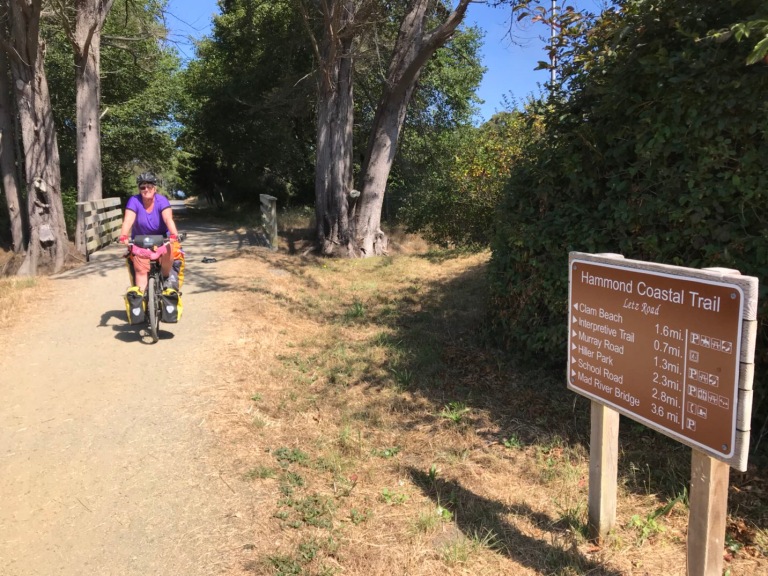 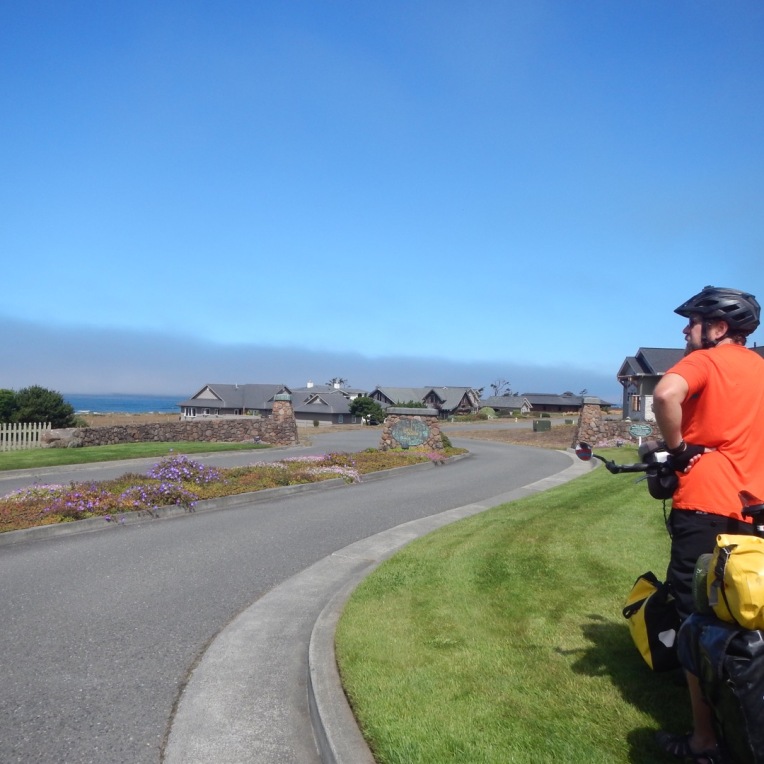 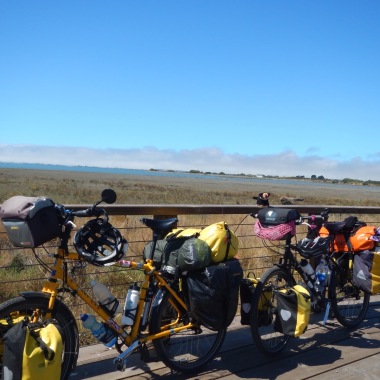 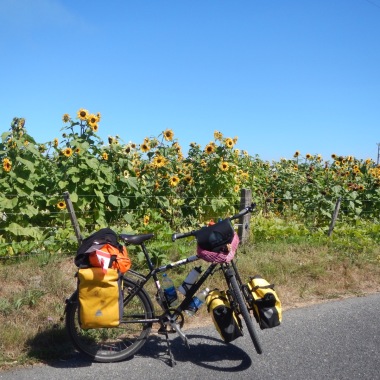 The way the fog comes and goes is actually quite fascinating to watch. It really has a life of it’s own. Riding through the farmlands, and the fields of giant sunflowers was also cool.

We rode a little on the 101, but soon found another bike path, that ran along Arcata Bay towards Eureka. We paused here to have some lunch, and enjoy the fog watching. Besides, we only had a few kilometres to go to the campground. The Redwood Coast Cabin and RV Resort, used to be a KOA (Kamping Of America) Campground, but was now independent. They still offer a hiker/biker area, and it was actually pretty good. We had a nice private, secluded area, behind reception and the amenities, with shade and sunshine, power outlets, and peace and quiet. We set up house, put some washing on, and began the big task of relaxing. I mean blogging….he he he. Tomorrow is the big’n, so no sleeping in! 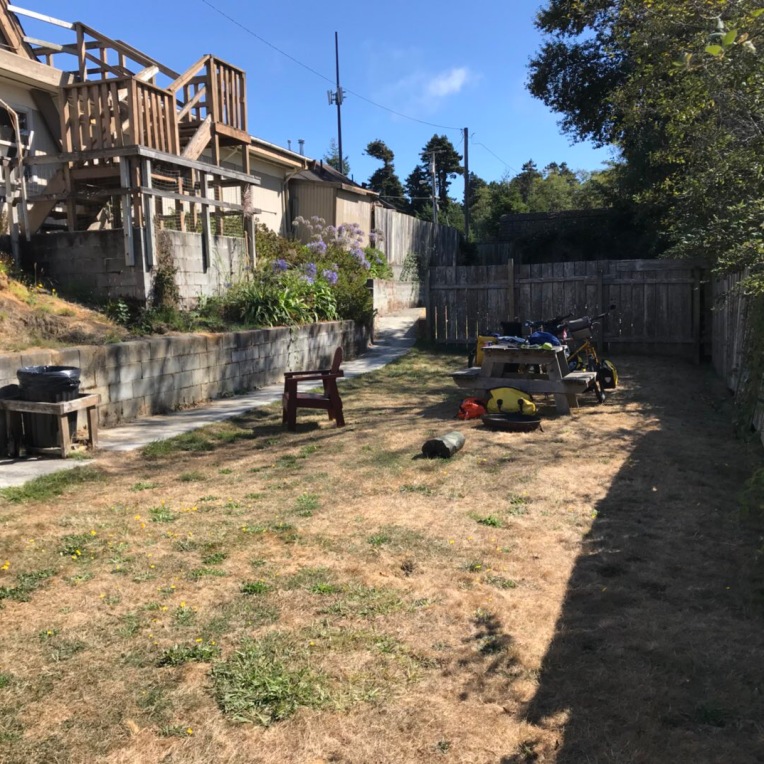 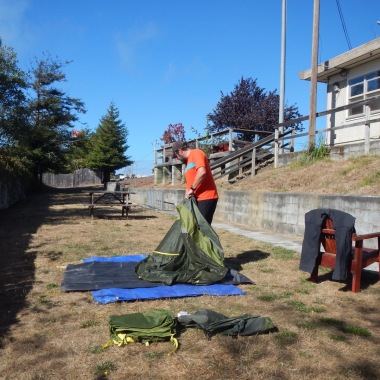 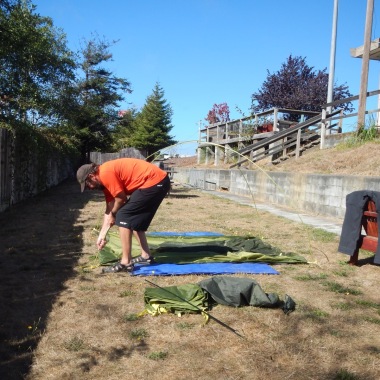 This is our little spot, and check out Will in action. That’s my job, but he’s not a bad apprentice. 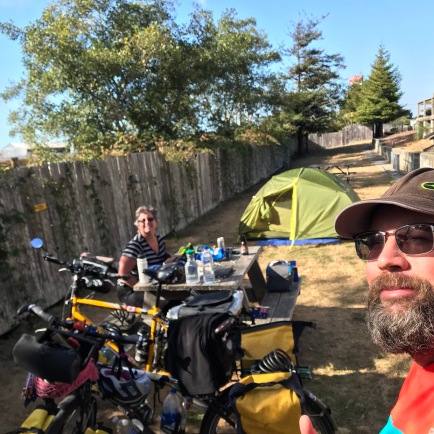 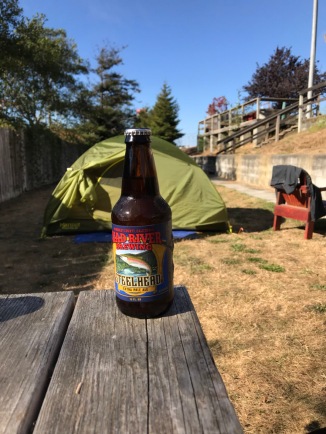 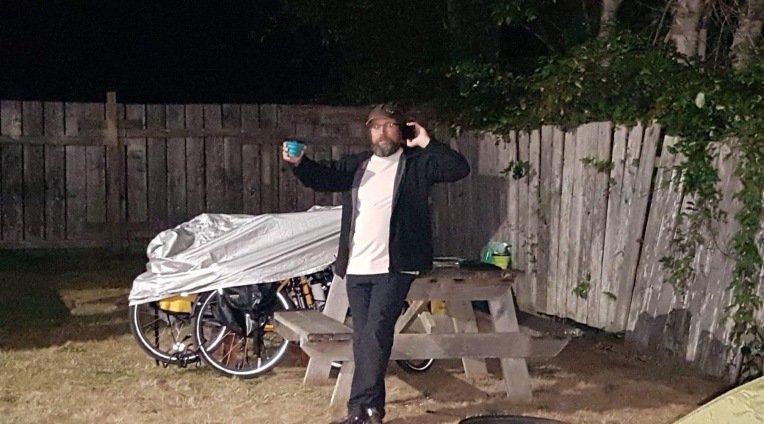 Home sweet home, a couple of coldies, and a chat to the family. Great end to the day.

Fog and mist when you get out of the tent was shitty, but it didn’t take too long for it to burn off, and the sun to shine. By 9:30 we were trying to cross the super busy 101, to head south again. Riding through Eureka, was an interesting experience. The architecture is old Victorian, and many of the homes and buildings have been restored, and look beautiful. In contrast, there are also a lot of homeless people, just milling about. Many of these people are noticeably high on methamphetamines or Marijuana. Talking to themselves, shaking, staring into space, unclean, shaking, carrying garbage bags of belongings, or just sitting against a wall surrounded by rubbish. We had been told not to stay in Eureka, because it was unsafe. It was a bit unnerving. 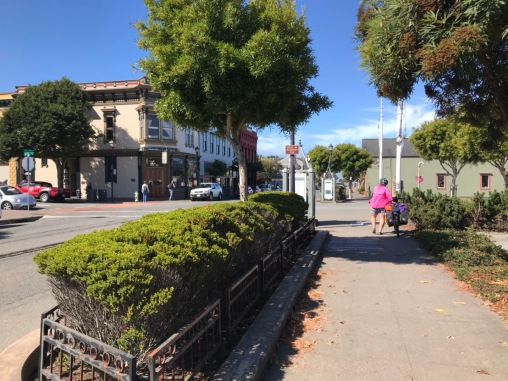 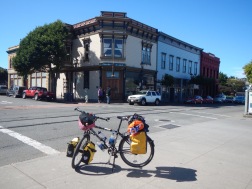 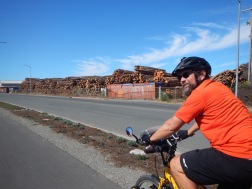 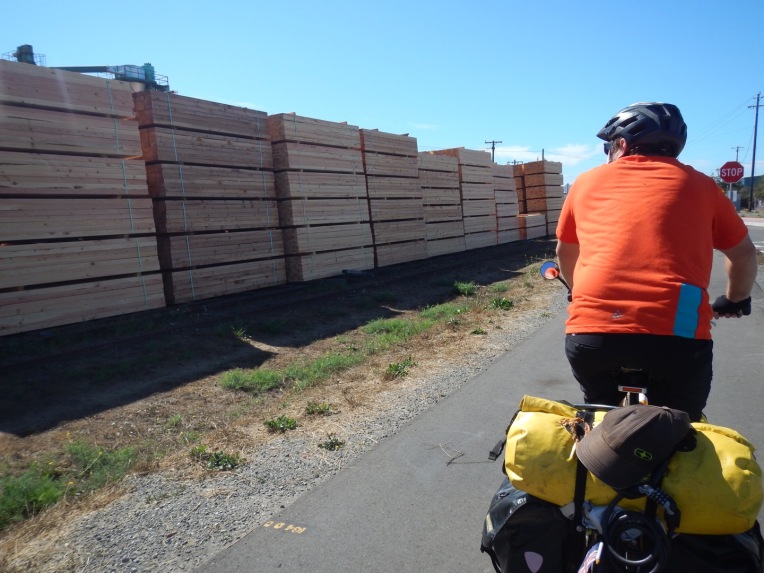 Eureka! A major logging town, but still so many out of work and homeless. One side of the track is unprocessed, the other processed.

From Eureka, there is not a whole lot of sights to see, and only one alternate route to get us off the 101 for a short time. So we took the road into Loleta, known for Cheese, and climbed a bit of a hill. At the top, we saw a couple on a day ride, and had a chat before riding through the cheese town, and back to the busy highway. Ugh, at least we had a good shoulder and an even better tail wind. We were actually smashing along.

With a lunch and final grocery shop in another logging town, called Scotia, we actually thought of stopping here. We’d done just under 60kms, and were starting to flag a bit, from the constant noise of the traffic. Not to mention the scenery that was a bit lacking. After checking all systems, we discovered there actually wasn’t any accommodation options here or anywhere else nearby, so we basically had no choice but to carry on and just push through to the campground. Poop.

Down the highway, about 10 kilometres, we turned off onto The Avenue of The Giants. This road goes for 32 miles, about 50kms, and runs through some absolutely beautiful and amazing groves of Redwoods. A few tiny settlements, and just some incredible trees. We were flagging badly, and it was getting late, so we didn’t really enjoy it as much as we should have. We also neglected to take many photos, but it will be forever in our minds eye.

At last we found the campground, in amazing setting of Redwoods, and found old mate David, from Germany, was still here. He is doing a great job of stopping and smelling the roses. We also met another American cyclist, Lawrence, who is riding as far as LA, it’s where he lives. He was “Bikepacking”, and was very compact. Later that night another English couple came in, after their 100 mile day, and explained they were on their honeymoon, and only had three more days to get to San Fransisco. Wow, that is just under 300 miles away. Not what I’d call a honeymoon, but they looked pretty happy. Amazing effort guys. Bloody hell! 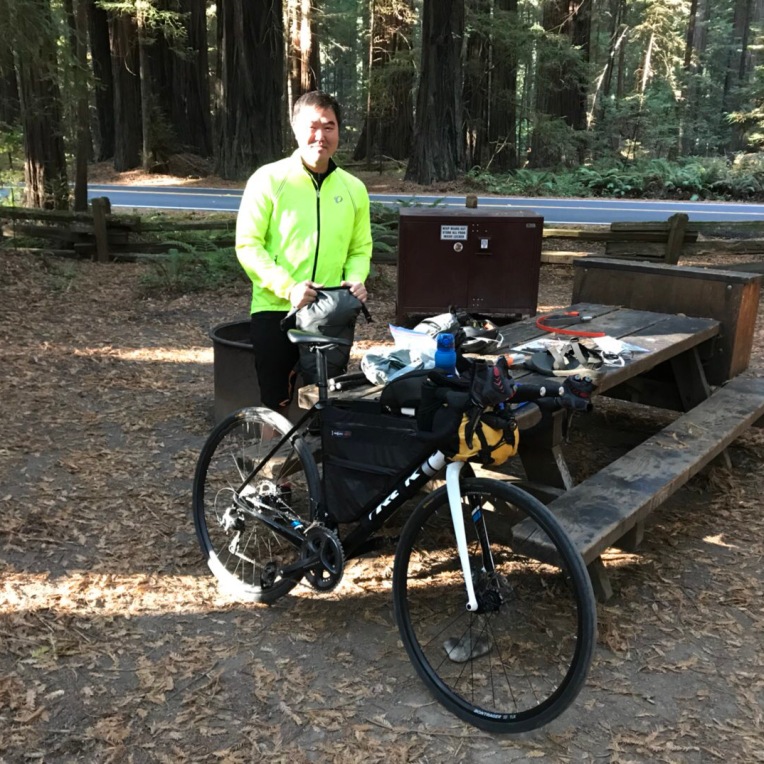 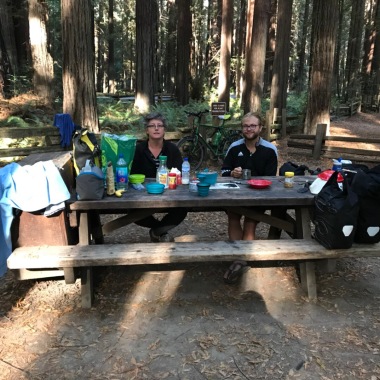 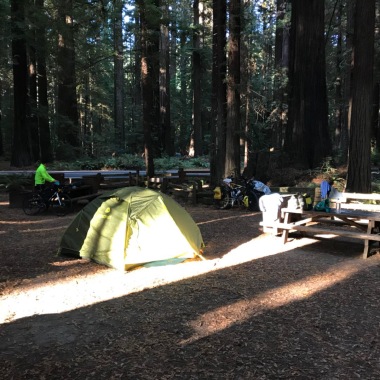 Lawrence is a big kilometre, light weight rider, and David is an old mate these days. It was a great spot.

All these guys are heading to Leggit, tomorrow, which is another huge day. I’m not going to be able to do that, so we are just going to go halfway, find somewhere to stay, then do the second half the next day. Then, before we get back to the coast, we have to climb the legendary Leggit Hill, which tops at just under 2000ft. So rest my body, and hit the hill first up, then I will do better. So I had a good sleep, not stressing about big days.

6 thoughts on “From Eureka to The Avenue.”