It was just what the Doctor ordered, I’m feeling a lot better this morning. Still tired, but that seems to be pretty standard for me these days. The Fibromyalgia, what ever that is, does seem to sap my energy. But we are all packed up and ready to go before eight, and head down to have a nice breakfast in the dining room. Another stunning day ahead, and we are planning on a biggish day, to Anchor Bay (74kms).

Heading out of Mendocino, we are right back to the gullies and climbs, and some narrow bridges with no shoulder. Mostly these bridges were on the uphill, and irritatingly, there was always a magnificent bay, or view, that we couldn’t get a picture of, and just got to glimpse as we sped to safety on the other side. A bit of bad engineering and poor planning, people.

Not a lot of traffic yet, most people were having a relaxed, late breakfast I think. Why not, it was a beautiful morning. 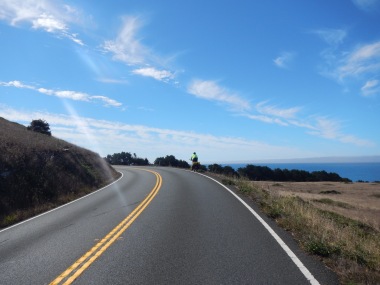 It was good to be feeling better, and the nice start to the day helped too. Some stunning views, and lovely sunshine were great.

The first part of the day wasn’t too bad, and the traffic was reasonable. At lunchtime, we rolled through Elk, and spotted Bruce enjoying a snack in the sunshine, near the grocery store. We pulled in, and then Janet and James pulled in, and then Alan, and then another young couple, Clayton and Brin. Wow, that’s eight of us crazy buggers in one spot. After many conversations, it seems that all theses guys were heading to Manchester KOA, because it has a hot tub, and takes cyclists. Will and I thought we’d consider it when we got there, after seeing how I was feeling. 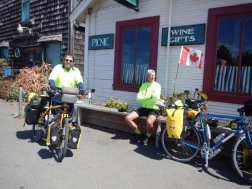 When we arrived, it was empty, then it was overloaded with the crazy gang. The most cyclists we’ve had in one spot on a tour. Pretty cool.

Bruce took off first, then James and Janet, us, then the rest. Right after Elk, there is a climb, which is apparently the steepest of the route, and we were all worked up for it. It was a doozie. The first switchback was steep, the second one was bloody steep, and I had to drag Betty around the bend, and up a few meters before riding again. Will even struggled, and had to stand up in the pedals to conquer it. 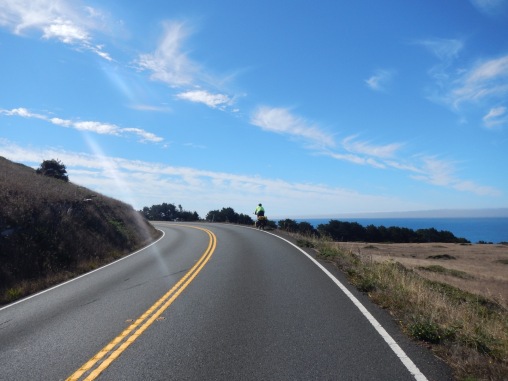 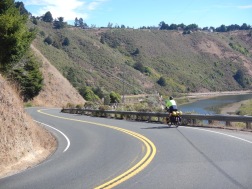 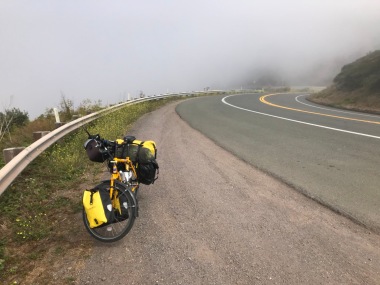 We left Elk in the bright sunshine, but just over the next gulch, the fog was coming ashore. Bloody crazy this fog. It moved pretty quickly, so once over the steep climb, it was already clearing again.

The fog was rolling in, and the sweat was dripping in my eyes. This was a steep son of a bitch, but we did it! All the way into the fog. From here, it was up and down, in and out of the fog. It really is an amazing thing, a creature with a mind of it’s own. Warm in the sun, cold in the fog, in, out, up, down. Weird day. By the time we reached Manchester, we had both had enough, and decided to join the rest of the crew. 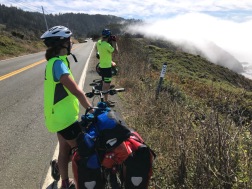 We were all leap frogging along, stopping to just watch the fog. James is into photography, and was really enjoying the opportunities for fabulous pictures, and Bruce was just loving the scenery. We all half expected a ghost pirate ship, or mystical dragon, to come eerily out of the fog. It was cool to watch.

Bruce, Janet and James were first in, and had sorted out two sites for us all to share. That is so great. It worked out $10 each, free showers, wifi, and lots of great company. Clayton and Brin had passed us earlier, after the Elk hill, and Alan wasn’t too far behind us. Another cyclist from Switzerland, Danny, joined us too. The nine of us had a bloody great night. We got some wood, lit a fire, shared beers and wine, and great stories. Unfortunately we came across our very first obnoxious Americans. They pulled up in their big old pick up, and straight away started walking around, complaining loudly, about not having a table, and we had three. Yep, we’d gone and moved one more over to accommodate us all, but there were lots of unused ones about. He could of just walked over, said hi, and asked if we could move the table back, but instead, sent his wife to management, who came and did that. We were more than happy to put it back and get a different one, but management (to their credit) put the guilts on him, and sent some workers out with a special table for him. Seriously, it was quite pathetic for an adult to make such a fuss. Maybe he was horrified by all the padded pants strung over the fence drying.

A fire, some cheap wine, a nice bunch of crazy buggers from all,over the place, and it was a great night. We made good use of the tables too.

This group of crazy cyclists, though, had a bloody great night, with a visit from a very self important skunk, who confidently roamed from tent to tent in search of free goodies. Which he found at James’s tent, in the form of cookies. We all tried to shoo him away, but he’d just raise his tail threateningly, and carry on about his raiding. He knew we didn’t want him to stink us, but we didn’t know he wouldn’t. It was hilarious. You can’t buy these experiences, can you?

Old Pepe Le Pew was sure he could find some yummy tucker, and he did.

The young guys, and Danny, were gone early, they all had big days ahead. Much bigger than ours. The six of us remaining, were all heading for the same campground, and dispersed randomly throughout the morning. Obnoxious American, Charles, decided he’d been a dick, and came over to apologise and gave us a brand new reflective vest. He now believed the management were to blame for the situation, as they’d told him the camping area would be full. It wasn’t. So well done Charles, you redeemed yourself. Cheers.

Manchester was different than the previous areas, and quite nice. Some interesting lawn art, and the last of the summer blooming for the California Poppies. They were really pretty.

Leaving Manchester, it was a bit cool. But as we rolled along, up and down the never ending hills, the sun did bust through to warm us up. Again we had a tail wind, that increased as they day progressed, which also kept the temperature down. This is just a bit too cold for me. Another 5-10 degrees would be nice. As we rolled down and up into Anchor Bay, we spotted Team MumSon (James and Janet) enjoying some lunch in the sun. We stopped to see if there was any food we wanted, and for a toilet break, but it wasn’t suitable, so we kept moving. They’ll catch us. 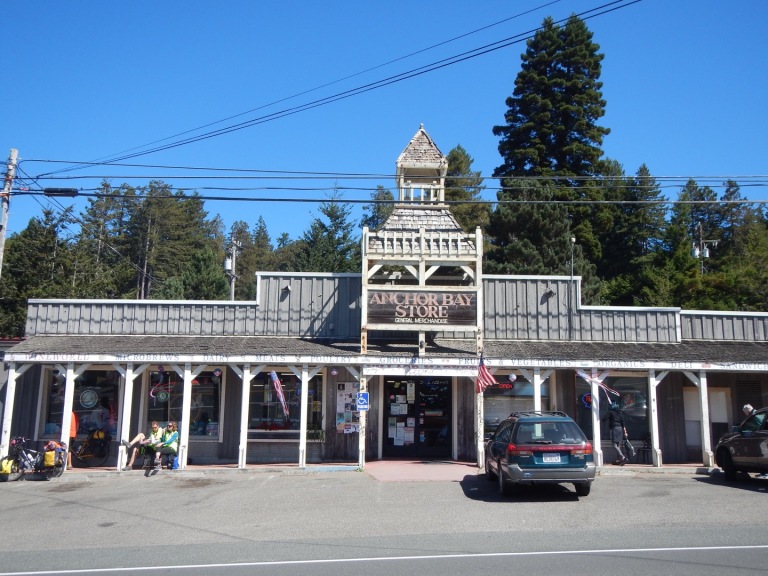 A bit further on, we came into Gualala, and the hunger pains had started. I spotted an outside BBQ happening, and my mouth started watering. We pulled in, to spot Bruce enjoying a delicious Tri-Tip sandwich. I don’t know what Tri-Tip is, except that it’s beef, but it smelt so good. I sorted out a couple of sangers for us, while Will went into the grocery store for dinner tonight. I didn’t realise how much I was needing some good red meat. It was just what my body wanted. I was eyeing off Will’s one just as he came out with the supplies. Phew, lucky. 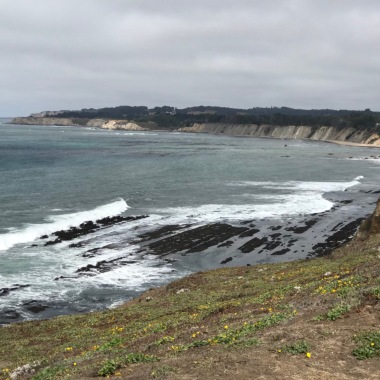 Along the coast, heading south, it was warming up a little. We had a nice tail wind, and it blew the fog away.

We rode with Bruce from here on, up and down the many coastal hills, that thankfully seemed to ease up towards the end. It was another tough day. Why is it seeming to not get easier? I’m mentally struggling with this situation, as I should be getting used to it, but I’m just feeling fatigued all the time. Everyday! I think I need another rest day. As I’m pushing along, I’m thinking about this, and going back to figure out our last rest day. Hhmmm, it was actually a while ago. It was, let’s see, holy cow, it was way back in Cresent City. That was almost 10 days ago. Idiots, that’s too long. No wonder I’m struggling. All these hills and no rest days. Well, now we have a schedule to keep, we can’t have one until we reach San Francisco, another 3 days. Holy cow, how will I get through that?

Finally, we reached the Salt Point State Park, and I was pleasantly surprised at the trees along some of this forest. They had that distinct smell of Australia. Stringy bark gum trees. Beautiful. Another couple of hills, and we managed to find the campground. The ranger informed us that the hiker biker camp was just up the road, on the other side, and had no showers. Who cares, we’re all done for today. Oh but you can ride another 3 miles to the next campground with showers. Uh uh lady, done is done! Bucket bath is fine by me tonight.

Team MumSon had arrived minutes before the three of us, and got themselves set up. Bruce, Will and I got set up, and I went to the toilet block and washed my clothes in the sink, then myself. We still had some nice sunshine, so I was hoping to dry some of my washing. Alan arrived, and James got a fire going, and again the six of us enjoyed a lovely night in an amazing spot. I could easily have spent a rest day here. But tomorrow is a short day, and is supposed to be an easier one. We can do this!

This was the first time we could cook our dinner on the fire. Yummy, pork steaks cooked over coals. Mom, mmm, mmm.