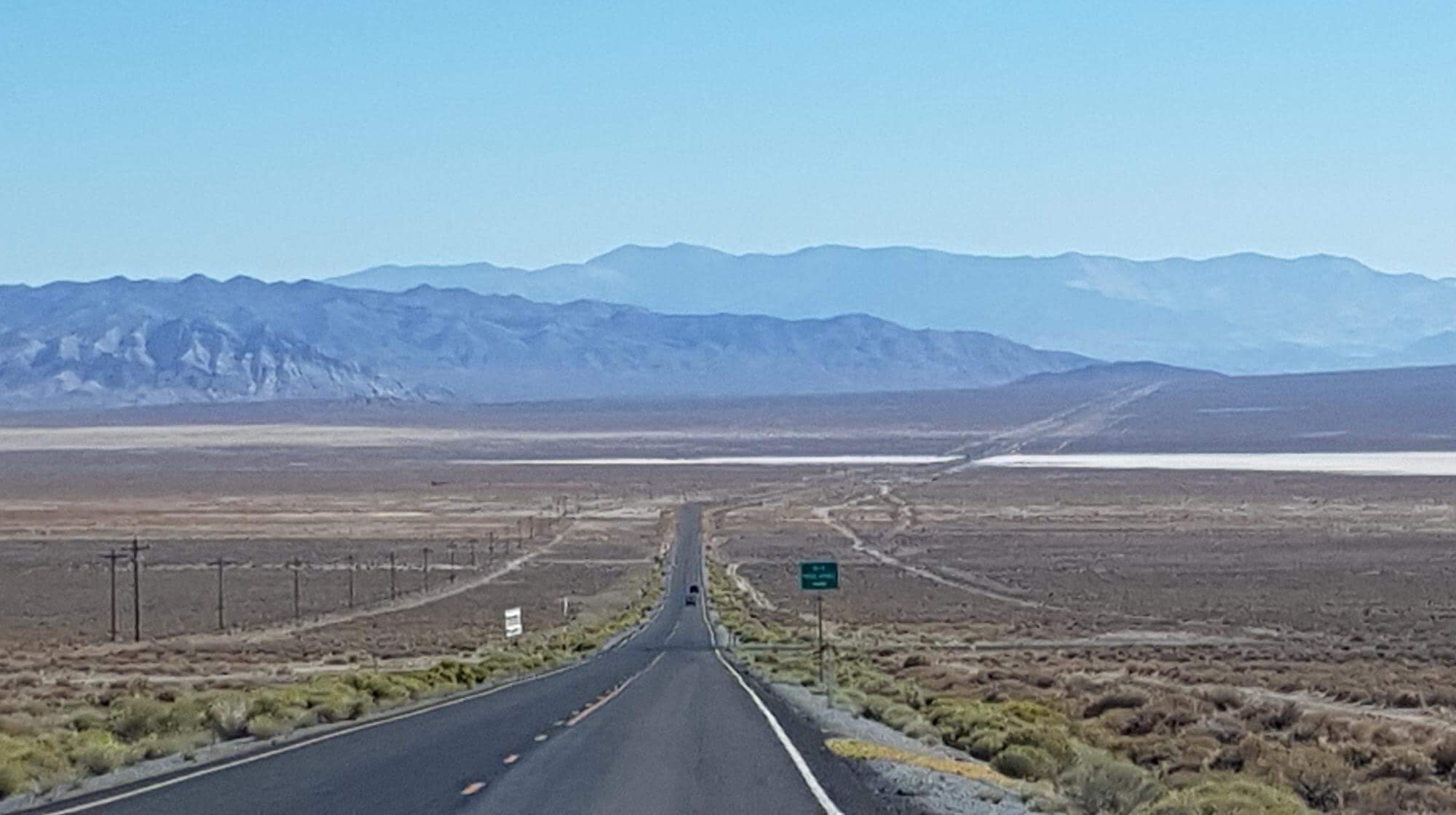 Hi Y’all, Will here, while Jenny’s been busy keeping our personal blog up to date, I’ve been doing a Cycle Journal of our North American Bicycle Tour over at “Crazy Guy on a Bike”. CGOAB, wiljen’s North American Pacific Coast Ride.

Since we’re currently on an RV Tour I’ve put the CGOAB Journal on hold until after the 5th of October.

What this means is I’ve been nominated by Jenny to write about the last 4 days of Motorhoming around the good old U.S of A. I doubt my style of story telling will be as riveting as the standard set by Jenny, but I’ll give it a crack…..here we go !

How good can it get ! Once out of Fallon, Nevada we were on what is reputed to be America’s Loneliest Highway. By our Aussie standards it was busy, but to be fair there really wasn’t that much traffic. Maybe a vehicle every 5 minutes or so.

We are in Ranch Lands & Mining Country out here, following historic routes of the Pony Express & Overland East-West Telegraph Line. The Mountains contrasting against the plains are incredible. The Big Sky is a lighter shade of blue than we are accustom too, it is desolate & beautiful.

We had a perfect day, the Motorhome of Madness was running well & on the quieter highway I could allow myself to relax a little. Jenny even put some music on…Our own version of Road Songs playlist of cause…. It’s a Wide Open Road by The Triffids being one of many !

We past through modern interpretations of American Wild West Towns like Austin, Eureka & Ely. Just before Ely we were hunting for a campsite near Ruth an extremely large Gold or Copper Mine (?) & ended up at the beginning of an Open Cut Mine. Quick U Turn while the Dump Trucks & Digger Operators watch the wiljen antics & we are out of there.

Plan B head into Ely turn right onto Hwy 6 and about 8 miles out of town we were in the Federal Campground of Ward Mountain. Only $8 for the night and everything is new ! Later we met Jeff & Terri from Phoenix who spend 6 months of the year travelling in their Toyota Tacoma/Caravan combination. They had some good advice about our up and coming route. Nice people !

We cross from Nevada to Utah on Highway 21 & lose an hour. (Poxy Daylight Saving).

After some yummy Bacon, Eggs, Tomatoes, Mushrooms on corn Tortilla, washed down with a few cups of instant coffee. We got talking again to Jeff & Terri. This meeting people has yet again slowed our departure time, but we love it.

We didn’t mind they were great to talk with about Travel, Life & Early Retirement. They both quit the infernal equivalent of a modern day hamster wheel at 51yo. Decided living life would be more rewarding & fun !

We stopped in Ely to fuel up & buy supplies then headed towards The Basin, which is a small National Park that would have been nice too check out but we have found ourselves on a tight schedule so continued onto the No. 21 Highway towards Utah.

I honestly can’t easily describe the landscape, huge mountains with massive plains between them, really incredible. Not many trees and for the majority of the time we were above 6000 feet (2000m in our lingo). I’m told it snows heavily in this region & that the snow starts at the end of October. A mere 5 weeks away. We’ve been enjoying sunny days around 20C & cold nights of 0C. Nearly all the National, Federal & State Parks start closing for the winter in a week or two’s time.

Guess it’s time to head south. Looks like we’ve timed our Road Trip perfectly. No trouble getting a nice camp site at the moment.

Crossing into Utah means winding the clock forward by an hour, so around 4pm we were on the hunt for something. Jenny found Minersville Reservoir, great little place, only $20 with all facilities…Power, Water, Ablutions & sewage waste dump. Nice that’s my job….:-(

Another very chilly morning in the RV, even fired up the LPG furnace for half an hour to make getting out of bed bareable. We didn’t end up dumping the Grey or Black Water but were able to top up water & batteries at Minersville Reservoir.

Towns we drove through were, Beaver & Panguitch & lastly Bryce. While driving through some tight mountain pass, not far from Bryce one turn snuck up on me with a yellow warning sign of 25mph for one particular downhill hairpin. I managed to bleed off most of the speed & get down too 35mph as we hit the bend. All was going well until my unsecured 31L Ortlieb Duffle Bag full of clothes slid out from the above compartment and clocked me in the head, knocking off my multi focal glasses & landing on Jenny’s lap in the passenger seat. I still made the turn (now half blind) & settled the big RV down a bit.

Driving into the Bryce area was great, amazing vivid red coloured cliffs, rock towers & archway tunnels to drive through. Once at the Park Entrance we paid our $35 entrance fee (good for a week) then proceed straight to the nearby North Campground. It was about 2/3rds full at 1pm. Jenny & I found quite a nice space for the Oversized Van & relaxed for lunch.

To conclude our day we did a 5km (about all Jenny’s knees can handle now) return walk along the Bryce Canyon Rim up to Sunrise Lookout. Seriously the views were amazing. Hoodoos everywhere, incredible erosion & colours. While on our walk we met an American Man in his 50’s who had just completed an 8 mile hike to the base & back….

Carroll had lots of great info on what to see & do in this region. All of Zion NP, South Rim of Grand Canyon and more. I tried to explain we need to return the RV to Los Angeles in a week & have decided to see “Lots of a Little” rather than a “Little of Lots”. He struggled with the concept and thought we would be crazy to miss Zion when we will only be 89 miles off the main road from it.

After 30 years of travel with Jenny we know you are better off just slowing down, it is impossible to see everything at once. If & when we return to America we would make a big effort to return to this area, it is that interesting.

I cooked up some omelettes, realigned the Bicycle handle bars & we headed for Swamp Canyon about 10kms further into the Park. Since it’s the weekend it’s busy here today so stacks of Cars, Buses & People getting around. There were lots of hills and at this altitude both Jenny & I did find the exertion hard, legs were fine but you could feel your heart & lungs struggling. We rode as high as 8300 feet ( 2530 metres).

Also checked out Bryce Point & Inspiration Point, both had excellent views, but lots of people.

At 3pm we returned to the Motorhome of Madness. Nice to relax after our 25km ride. We spent the afternoon enjoying the forest & luxury of the RV. Thanks for reading 😀🚴‍♀️🚴‍♂️🚐….