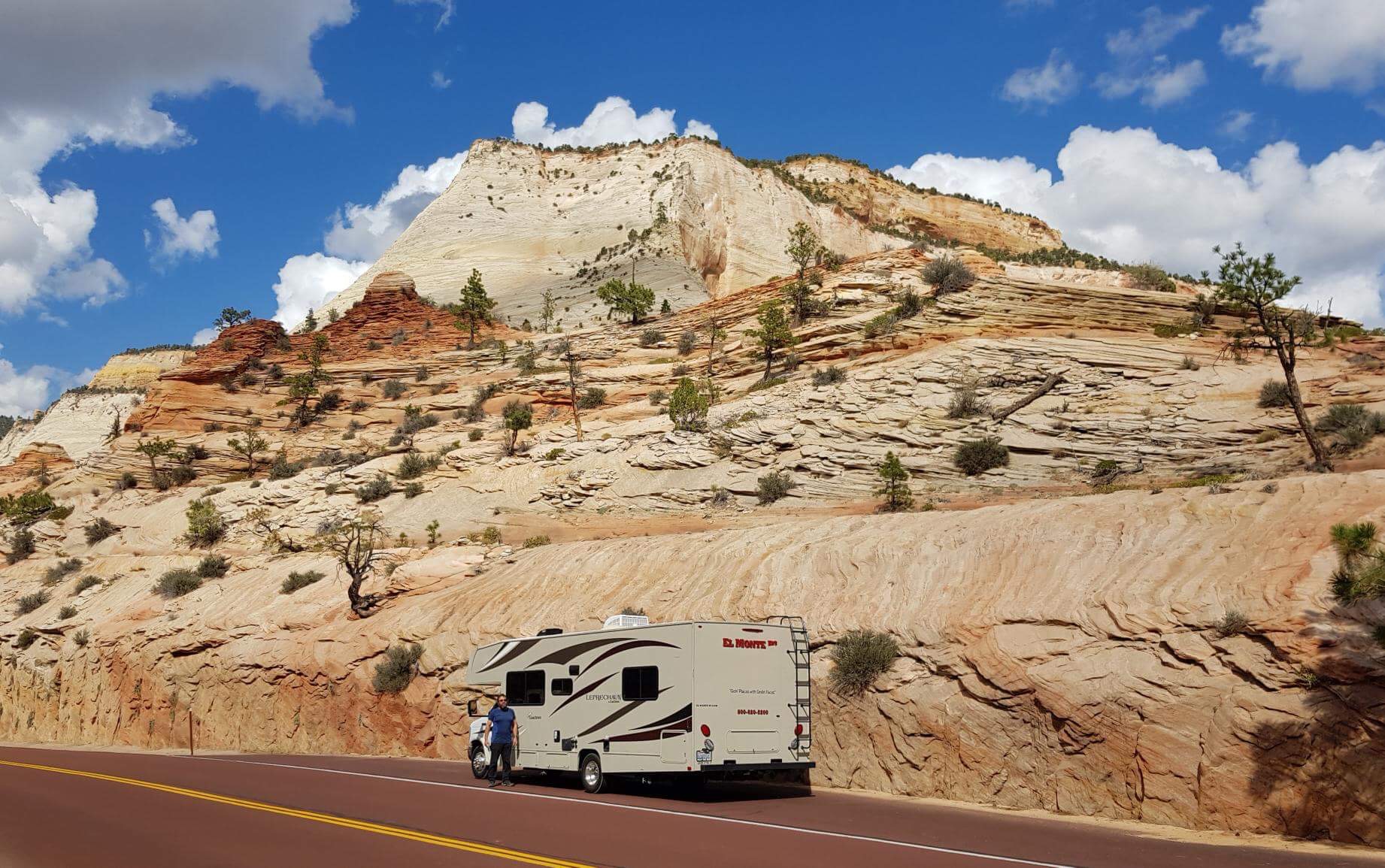 29C overcast (big Hurricane off Baja) no wind. Lost another hour due to DLS.

This morning we spent a bit of time chatting to our Campground neighbours, Brad & Lisa from Austin Tx. We first met them a couple of days earlier at LeFevre Overlook. More great Americans with lots of good stories & helpful advice.

Late departure of 11am & some minor back tracking today. Jenny & I had a team meeting the night before and unanimously voted to head for Las Vegas via Zion National Park…..Number 4 of the BIG Parks on this short RV Tour. Back to Mount Carmel we drove then turned off towards Zion NP.

A few miles down the road and there’s a big brown sign that we will have to pay $35 to drive through the park……NOoooooo. We thought we were so clever by not buying an annual National Park Pass for $80. Thought we’d save a whole $10 bucks !

At the Ranger Booth near Zion’s entry I asked if we could drive through to Las Vegas without paying ? No said Markus the Ranger, you have to pay.

I explained we had already paid for Bryce & North Rim over the last week. Markus said if we can provide proof, then he could upgrade us to an Annual NP Pass for $10…….DONE & Thanks Mate ! There was one final sting though, because the Motorhome is so friggin huge the 2 mile long tunnel will have to be closed to other vehicles heading the opposite direction, that will cost you $15 Markus said. Sure I’m ok with that….as it turned out the price was far more than reasonable, the engineering to build the roads & tunnel was incredible.

Zion NP is so popular all the Campgrounds were full, you have to book a site way ahead. Jenny & I decided to carry onto Quail Creek, just outside of Hurricane, Utah. It overlooks a Dam & was nice and quite. The night was hot and humid because of Hurricane Rosa off Baja & the little bugs were out in their millions. Our Eco Friendly Bug Spray that stinks like Dencorub sorted out most of them.

While at Quail Creek we got a message from German Cyclist, Carsten. “Where are you & what are you doing”?

Carsten was going to Cycle from Los Vegas to Echo Bay on Lake Mead a 100km Ride. We decided we would pick him up while he was cycling Highway #167 and bring him back to Echo Bay, potentially saving him 50kms of riding & spending a nice evening eating Beef Stroganoff cooked by Jen while sipping on way to many cold beers.

As usual the scenery was stunning, mountains, rocky outcrops in a desert setting. 30 miles past the Echo Bay turn off we spotted Carsten. He was very happy to see us. We loaded his bicycle into the Motorhome of Madness and headed back to the campground to set up. The Camp Host “Debbie” accepted we were all travelling together and only charged us the $20 fee for one vehicle.

Early in the afternoon there was a small rain shower but it soon stopped. I lit a camp fire, Jenny cooked dinner & over too many beers & 1.5 litre bottle of red wine we shared story’s of our adventures. Great night !

Obviously Jenny & I are just a little less then a week behind in our Blog. We did make it through to L.A. , with a couple of twists & turns along the way. Jenny can fill you in on the details in her next blog post. I’m heading back to do the regular Journal updates over at Crazy Guy on a Bike, since we now have 2 months & about 2500kms of riding ahead of us. Crazyguyonabike wiljen in North America.

Just before I go I’d like to leave you with my opinion & thoughts on RV’ing in America. If you are time poor but can scrape 3 to 4 weeks of leave together then hiring an El Monte RV (or similar) & doing a version of the route we took would be a viable Road Trip Adventure. Just aim for the shoulder period & stay away from US School Holidays & Peak Tourist Season.

From mid September to mid October, I’d strongly suggest you start in San Francisco & finish in L.A. Allow for a minimum of 14 days RV Touring with 1500 free miles. If there are only 2 of you then try to rent a 21 foot RV. At either end of your tour you could check out the cities of San Francisco & Los Angeles, 3 to 4 days for each city would be enough (for us).

Thoughts on touring by large Motorhome. This is the first time Jenny & I have ever travelled in a Motorhome, with the exception of a Yacht Bare Boat trip several years ago we have never had the luxury of having Kitchen, Shower, Toilet & bed all made up at our finger tips in our Travel Machine. It was quite a novelty.

Would we do it again….yes possibly. The worst compromise was the size, (27 ft or 9m) which means parking is difficult, going down unknown tracks not advisable & fuel economy horrendous. We averaged 10-10.5mpg or 22L per 100kms.

Team wiljen did about 1750 miles over 2 weeks, not really very smart in a Big RV. I think a small Car combined with tenting & cheap Motels would work out similar of cheaper, but no where near as much fun !

These Motorhomes are really designed for A to B travel, then park up for an extended stay. Once stopped you need another means of transport to get around. Bicycles are good for that but you may need a small motorcycle or car for longer trips & that equals towing which has all its own inherent issues.

Possibly a Small Caravan is a better compromise ? Each to their own I guess, must say that toilet & shower were both nice !

See you out there on the road some day……Will & Jenny.