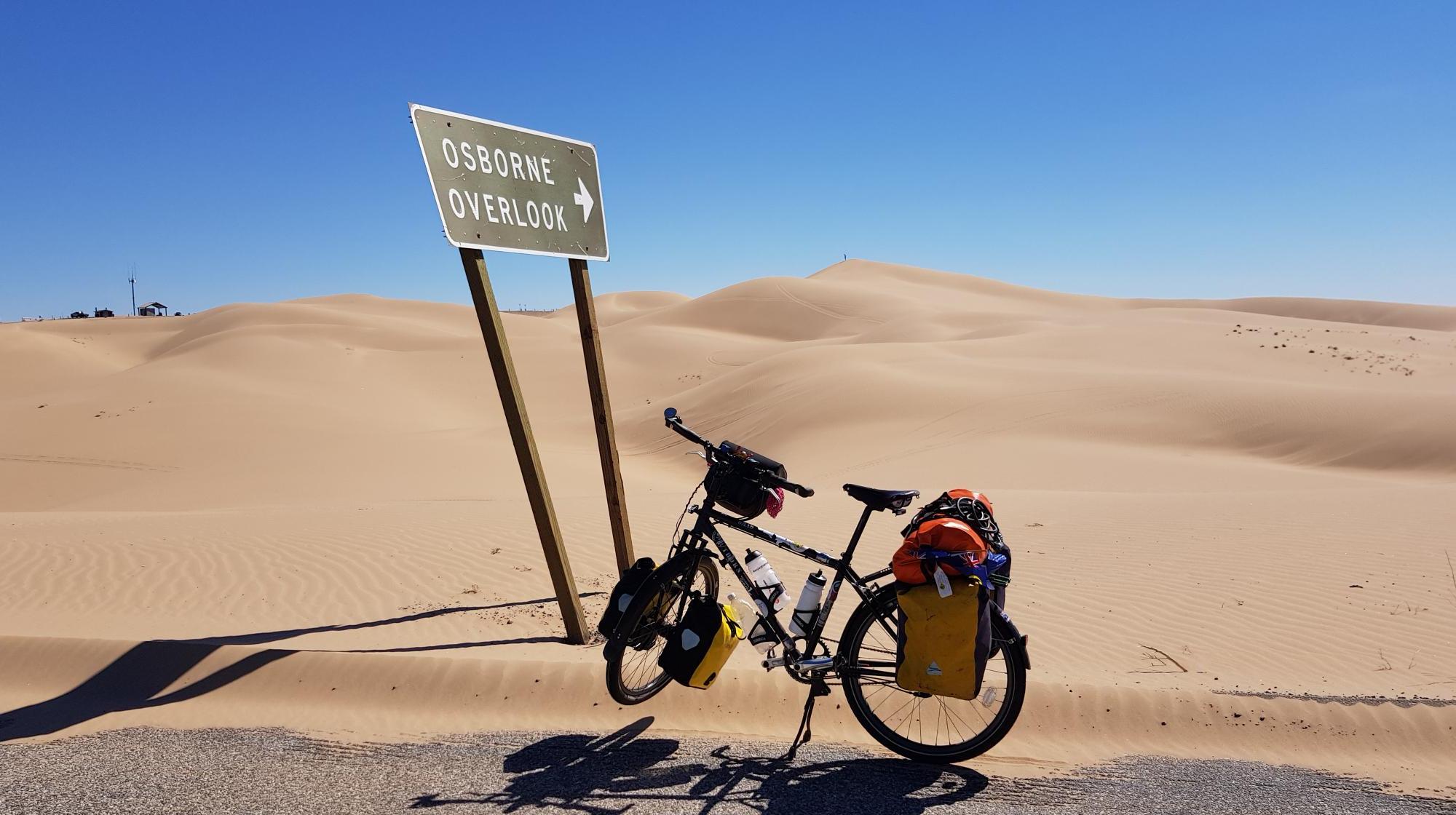 What a great value hotel. Both of us had a good sleep, and Sergeant Will set his alarm early and we are working on earlier starts with the wind and heat becoming an issue. So we’re up and going for breakfast, which was included in the $60 price. Not much action in the eating area, and not much food left. The Indian dude at reception tells us we are the last ones. Breakfast is almost over, and everyone has already checked out. What? It’s only 8 o’clock? So we smashed down some grub, packed the bikes and pedalled off. First stop groceries and extra water, we have to bush camp tonight, as the next place of significance is 149kms away.

Super loaded up, we head off east, with a moderate cross wind. As we said yesterday, we are below sea level, so we have no choice but to be heading up. It’s not a huge gradient, but we’ll reach 350 meters above sea level by the end of our day. The road also turns into the wind. Super.

After the vast growing plains, the road started to curl and wind around and over the desert dunes.

I can honestly say that the morning ride wasn’t too bad, and we maintained a good speed. Miles of agriculture, it looked flat, and it was amazing to see the endless fields of plowed ground or greenery. All lined by irrigation channels drawn from the Colorado river. Hmm, the poor river, how can it handle all this?

Highway 78, was pretty good so far, a reasonable shoulder, and clear enough to see traffic coming in both directions. That was until we got to the Imperial Dunes Recreation Area. It was out of a Star Wars movie set. Unbelievable! I’ve never actually seen sand dunes like this, for real.

It was a tough old climb, but what an amazing area. There are a couple of camping areas for the dune buggy enthusiasts, with repair shops, and even memorabilia stalls. It is big business, and we saw plenty of huge RV’s towing trailers full of ATV’s and what they call OHV’s (off-highway vehicle). 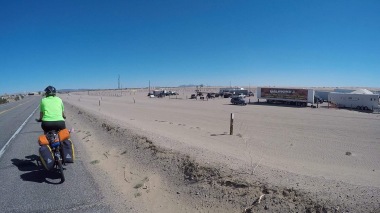 A totally incredible area. Huge dunes, constantly moving, barely a plant to be seen for miles.

Then up we go, battling the wind and sand blowing at us, to get over this area. The trucks were increasing, but still doing their best to look out for us. Our strategy now that things were harder to see, was to each be the lookout for one direction, front or back. We were constantly yelling out info on traffic. By the time we reached Glamis, a flat area just over the dunes, with a huge dispersed camping area for die hard dune lovers and their dune conquering machines, and a store for everything dune buggy related, we were buggered.

At the store, we fed and watered ourselves, and took a good solid rest. We really wanted to do our 70kms today, so tomorrow would be roughly the same. After chatting to Robert, who was cycling around on his $70 bike and $50 trailer, with his dog, we pushed off again. The wind had picked up, and we continued uphill. It was very slow going, averaging about 8km/hr, and we were both sick of the headwind. We were riding past an old gold mine, it was huge, and it just didn’t want to end. Sixty kays down, and I was dying. Tired legs, sore butt, and just warn out with battling this wind uphill. Just after the mine, Will had had enough too (thank god), and spotted a track off into the shrubs.

Today is done, and we are lucky enough to find a good camp spot, with some wind protection, and we’re off the road. We had a short rest, set up our camp, and had a bit of a wash with as little water as we could manage (about half a cup each). It was just enough to get the road grime off and feel clean enough to sleep. Next we smashed together some slops for dinner, actually it was a chorizo delight, drank a bottle of wine, and crashed. We didn’t reach our target kilometres, so tomorrow will be another challenge, but we will have to make it as we only have enough water for one day. 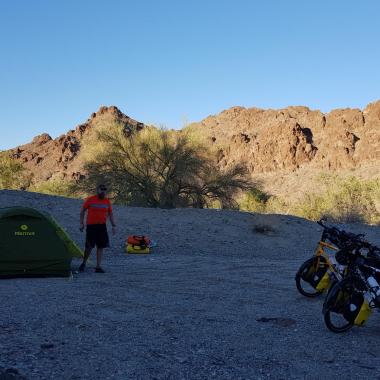 Other people had obviously camped here, there was remnants of several fires. We were tempted for one, but we were too buggered.

It was a bloody windy night, but I think we both had a pretty good sleep. Will’s annoying alarm went off, and we forced ourselves to move. Will’s on coffee duty, I’m on rolling up the beds duty. Only one coffee, and as big a bowl of cereal as we can manage, we need the energy. First aim today is Palo Verde, which we think is about 35 kilometres from us. Google maps shows that we are almost at the top of the rise, then our day should be downhill or flat. That makes the day seem much more doable. So we head off about 8:30am after hoiking our heavy bikes through the sand again, to reach the road. 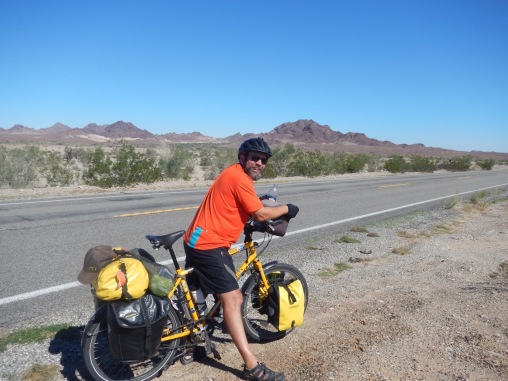 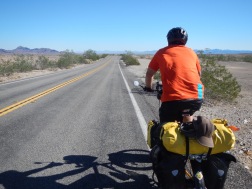 He is looking happy, and doing a great job of keeping me going. Thanks Willsie.

Straight away, we are up and down the roller coaster road, and the shoulder all but disappears. Bugger! It’s truck after truck, after truck, all doing the righty, but making us work quite hard to stay safe. More than a few times we had to rapidly remove ourselves from the road, onto the boggy stupid dick shoulder, as two trucks passed by us. Luckily the wind was a bit lighter this morning. It was already tough going, and after a billion gullies and steep ups, we needed a short break. Just as we pulled off onto a safe pull over on the other side of the road, another couple of touring cyclists arrived from the other direction. Huh, how lucky is that? Steve and Debs are from the UK, and they started in Alaska, riding down the great divide to here. Wow, they have been riding about a month longer than us, and done a super hard ride. They were going to Mexico, and didn’t really have an end date. So nice to stop and chat with fellow crazies, and they were really nice people. We all had similar views on this enormous country we were exploring. Interesting.

Unfortunately, we all had to get going, they were just lucky to be almost on the downhill run, with the wind at their back. They told us we still had 16 kilometres of these woopsie doos, then it would be flat. Uh, poop, let’s just get it done! They were right, and it was really hard going, but it did get flatter eventually, and we made it to Palo Verde, in the valley. We stopped at the Chevron service station and Mini Mart. We loaded up with sandwiches, chips, Gatorade and chocolate twinkies. Our new secret weapon. Delicious little chockie cakes filled with energy giving cream. Mmmmmm. Refueled, we pushed off with 30 kilometres to go.

Look how flat if is out here now. We’re still on sandy dunes, just that they are flattened out and planted with cotton. Bloody amazing hey?

The valley is just a massive agricultural section, irrigated by the Colorado River, and all in a grid pattern. First we rode 4kms north, then turned right to ride 4kms east, and on it went until finally we reached the outskirts of Blythe. It was such a tough ride. Both of us were buggered. The ACA route looked like it put us on the Interstate 10 highway, so we stopped to check. Neither of us wanted to ride that now. Luckily, DavoGPS felt sorry for us, and put us on a side road. Phew! It was a shocking road, full of cracks and bumps and stuff, but there were no trucks, and actually very little traffic. Finally, finally, we literally rolled into Blythe. A true desert town. Wide streets, some dingy old buildings, but a zillion Motels. The day was over, we chose the Motel 6, rolled the tired kids into the room, and crashed on the bed. I need a rest day, and we haven’t done laundry properly, since LA. So we’ll stay for two nights, and plan the next section to Phoenix, Arizona. Ah, a rest day. Yes!