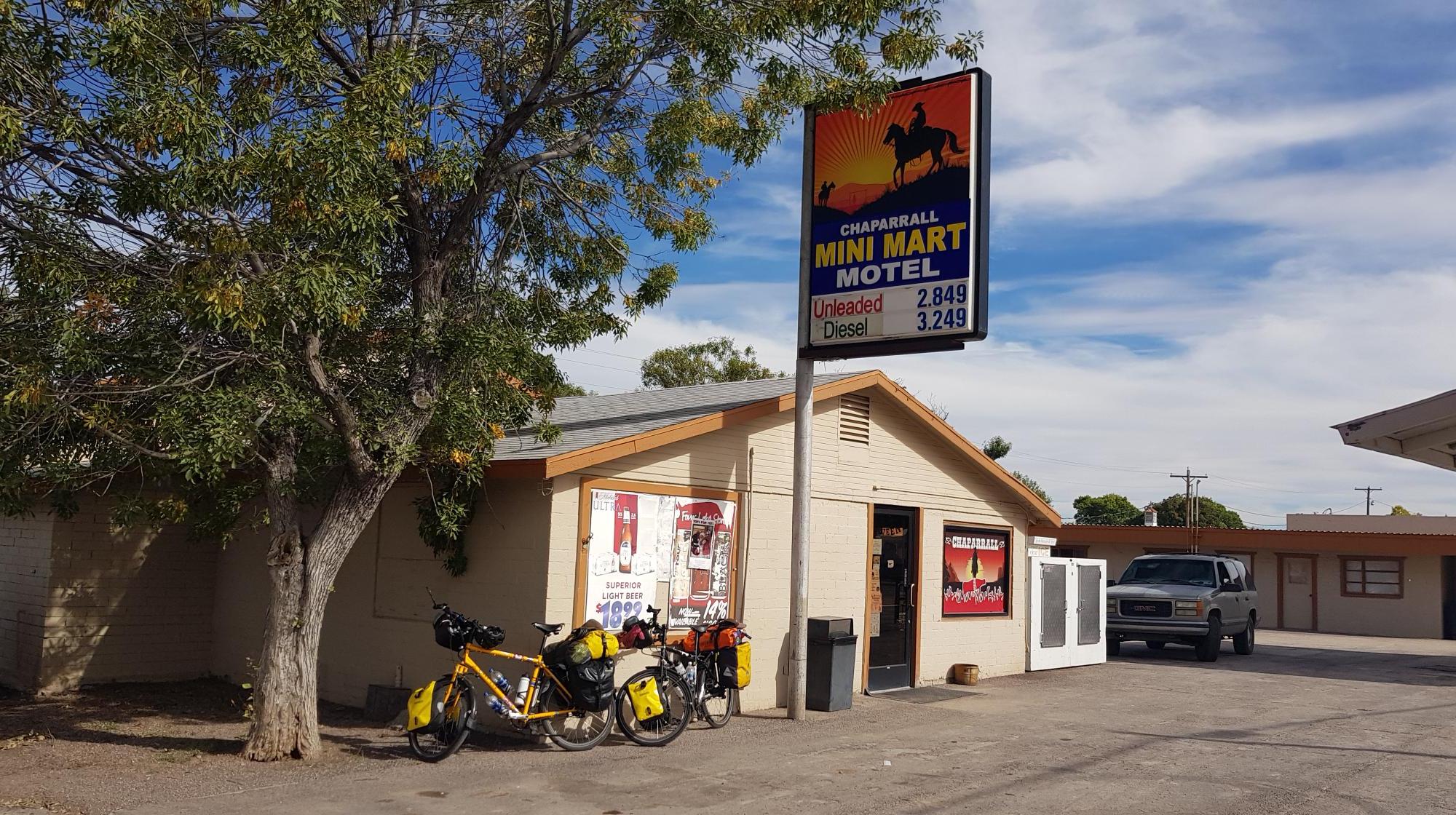 Yay, we did it, we left early. Eight in the morning, and we are on the bikes. We had two coffees, and cereal, and chatted to the two young blokes. Bloody amazing really! But I am feeling much better, and we are now on a four day climbing mission. Just in case there might be some wind, we want to get some kays in before that starts. It is really just a very gradual incline today, then increasing in difficulty, each day.

It was a lovely morning for a ride, and we enjoyed the quiet road, with a good shoulder for the first twenty kays. Along the way, we spotted The Incredible Hulk, hitchhiking, so picked him up and he’s hanging out with Antonio the anxious crab. They seem to be getting along. So we stopped for a banana break, and saw Aram, racing towards us. It didn’t take him long to catch us. After a bit of a chat, we all carried on. Aram disappeared into the distance pretty fast. 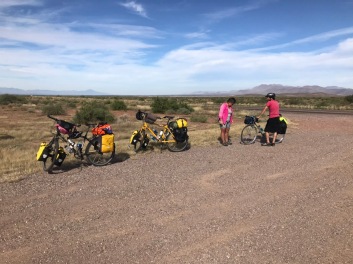 Welcome to the team Hulk. Aram is yet another cycling machine, and smashing it out at about 3kms an hour faster than us, if not more. Nice guy, with a great attitude.

The shoulder started to deteriorate, and we were dodging weeds, cracks and rocks. Lucky the traffic was very quiet. We continued with the uphill grade for about 45 kilometres, with no pullouts or rest areas for a lunch break. We were getting tired of the constant pushing uphill, and hungry, when we spotted an historical marker with lots of space to pull up. So we pulled out the chair, and relaxed for bit, while we had some lunch. There was no shade, but it was pleasant enough.

What a nice day for riding, and glad the traffic is so light, so we’d can use the road to avoid the weeds.

Refreshed and with the promise of some downhill, we got going again. As luck would have it, the downhill run was a glorious 12kms, all the way into town. We still had some riding in us, but the plan is to conserve it for the Lordsburg to Silver City day, which is going to be the tough one. So we had a look at our options to stay here in Duncan, and there weren’t many. A B&B, camp in the park, or a shady looking hotel. We of course couldn’t resist the shady hotel, which for $60 was pretty bloody good. Nicely refurbished rooms, and a comfy double bed. Enough room for the bikes, and that is all we need. 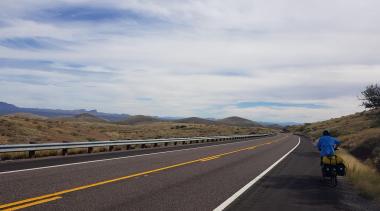 At last the down hill section. Just as we’ve had enough. It was a good run into Duncan.

The shoulder was pretty good, and nice and wide. We rolled nicely into town.

For dinner, we walked back to the steakhouse, and joined the locals for the evening meal. It was a good selection of them too, with a couple in their pyjamas, a table of real life cowboys (spurs and all), several young couples, and a couple of families. We stood out like sore thumbs, but it was alright. A very unusual mining town, not a bad town, just very unlike the mining towns we are familiar with. Tomorrow we leave Arizona, and enter New Mexico.

Up and out early again, and another beautiful start to the day. A few clouds around, but no rain forecast, so we are in for a great ride. More uphill, but it is just gradual all day. We were both feeling good, and were actually making good time. About five kilometres out of Duncan, is Franklin, which consists of, well, nothing, and is the last we see of Arizona. Another few kilometres and we spot the border sign. Oh, and a couple of touring cyclists, coming into Arizona. 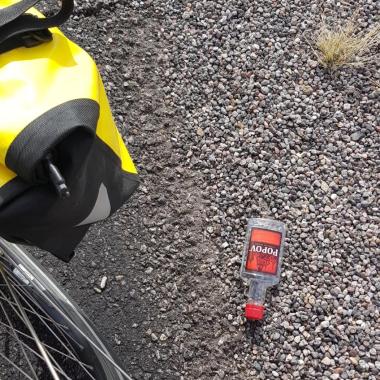 Another nice morning riding. We did see an awful lot of these plastic alcohol bottles along the way! How very curious.

Cliff and Susan are from Scotland, and doing the Southern Tier from East to West. They have done a few other big tours, including Australia, and they were riding a recumbent tandem, bicycle, with bugger all gear. We had a great chat, swapped details, and all continued on our way. They also right a blog, Going Nowhere Fast, on WordPress. Some great photos, and another interesting couple.

We were having a fantastic ride today, the road immediately improved in New Mexico, and there was hardly any traffic. The temperature was perfect, and the hill not too steep. Lunch time came upon us, and we pulled off down a farm entrance, and found a nice spot to sit and relax. We even had a little lizard join us. It was a very nice stop, and we were well refreshed to carry on.

We had a very relaxing lunch break, and this side blotched lizard wasn’t too scared of us. He sat and posed for his picture nicely.

Lots of waves from oncoming drivers today, a few friendly toots from trucks and cars, and both of us were really powering along. We took another rest stop just out of Lordsburg, as a bit of a head wind had popped up, and we needed a little more energy. Will had got what he could from the Chaparral Mini Market, but it wasn’t much, so we had twinkies and Nutty Buddies. Twinkies we’ve had before, and are alright, but what the hell is a Nutty Buddy? Well it is a layered wafer biscuit, with peanut butter between the layers, coated in chocolate. Basically, it is a sickly sweet, mouth gumming, gut jamming, disgusting thing. Luckily we had half each, it was so so sweet.

Big trucks were not uncommon, but this was the biggest, and we even got off the road for it. A wide open road of the desert. Very nice.

After swigging a litre of water to try and un-gum our mouths, we rode on to Lordsburg. Another mining town. It really just looked like a big junk yard. Oh dear, this doe not look good. We had been warned, by the Scottish couple, and several blogs we’ve read, but the next days ride is a big one, and we need a good rest to tackle it. So we navigated under the rail line, and to the other side of town, where the bulk of the hotels are. It is right on the Interstate 10, and a regular overnight rest stop for travellers. We went straight to Motel 6, snagged ourselves a cheap room, and got to preparing for the big climbing tomorrow. It’s also Halloween, so it seems appropriate to have a hard day. So far the plan is working, and we feel pretty good after two days of steady inclines, we’ve gained about 400 meters in elevation. Tomorrow, we will add another 500 meters, in one bloody day. Ugh! 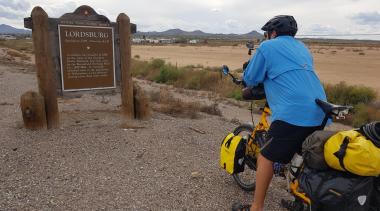 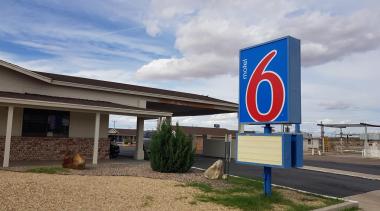 I can’t say that Lordsburg is a very attractive town, but we are here, and there is a value for money accommodation. Kranberry’s Chatterbox was a unique place, with a great sense of humour. We loved their Halloween humour. The food was okay.