Oh dear, that was a big night before a big day, oops, but totally worth it. Great people! A very slow start, the coffee wasn’t really doing the job, and the Sultana Bran was tough to swallow, but we pushed ourselves up and out the door. It was a bit later than we’d have liked, it is going to be a long day, but it’s just the way things go sometimes. You can’t pass up great hospitality. At about 10am, we were just getting the last straps tied, when Brad rolled up in his golf cart, with another guest, a young boy about 10yrs old. We chatted some more, the boy had been out hunting with his mum this morning, and shot himself a deer. Wow! What? “Do y’all wanna see it?” Yes, not really, but I’m curious, and kind of impressed at him, so yes! He was a cool, and very confident young man, and hopefully I said all the right things. Brad asked us to join them for coffee, so we did. We are late anyway, so what does it matter. Just means a longer day.

It was totally worth hanging around a bit longer, and chatting some more. They are super nice people, hard working, and so giving. Eventually, we said we’d better get going, and Brad just randomly suggested that he would drive us to the top of the big hill (30kms) so we could enjoy the rest of the ride. Oh my god, yes, yes, yes, please! Amazing again! So that is what we did, and it was the right thing to do, that hill was a biggun’ and we’d have been riding all night.

Brad, you legend. Thank you for a fun night, and saving our arses. Cheers mate!

So now we were on highway 39, which winds around, following the river, and over the hills, passed huge ranches. Now these ranches don’t run cattle, they run all types of exotic deer, primarily for hunting. So while we are riding and rolling quietly over the hills, we got to see heaps of these deer. They are used to cars, so don’t worry about that noise, but we snuck up on them a lot, and they were very wary of us. Some of them were gorgeous. I felt in two minds about them being hunted, but they have a nice life, lots of food, shelter, and huge acreage to roam. I don’t know!

Again, there was nowhere to stop, we just had to pull into someone’s gate way, and stand under their trees to have an apple and a break. The ride was beautiful along the river, although some of the short hills were bloody steep. It wasn’t a drama, but it was tiring. Especially after a big naughty night. We enjoyed the ride, the temperature was nice, and the river homes were stunning. By the time we reached Hunt, we were starving, and had done 45kms of rolling hills. We decided to take a good break, and have a proper lunch. It was the second best burger we’ve had on this trip. Just what the doctor ordered. 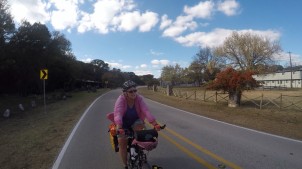 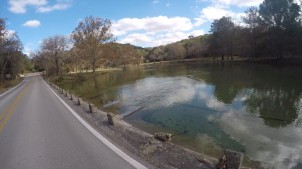 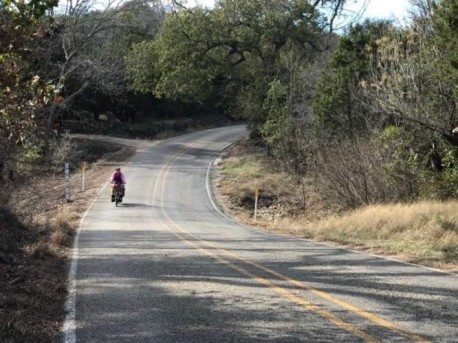 No shoulder, no cars, and a few steep, but short, climbs. Pretty and exhausting.

Great scenery on today’s ride, as we cross the Guadalupe river again, and again.

Watch yourself Betty, that red beast looks pretty cool, I might swap.

The rest of the ride was ever so slightly downward, which was nice, and meant we could set a good pace. Once we reached Ingram, we knew we were almost done. A quick stop at Stonehenge 2, can’t resist, then the annoying and tough ride through Kerrville, with a billion traffic lights, fading light, and it’s getting cold. We are even happier about our lift from Brad. We’d still have two hours of riding left if we didn’t get that head start. Thank you again Brad. We’ll stay for two nights, we are now ahead of schedule, and it’s going to be a crappy weather day tomorrow. Also, there is a chance we can meet up with James again. That will be nice. 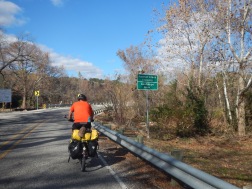 There was no shoulder here, but not many cars either. It was a beautiful spot, around Hunt, and some gorgeous buildings, made from local stone.

We love the “Don’t Mess With Texas” signs. Nice play on words. Who knew we’d have another visit with Stonehenge, and there were some great murals on our way out of Ingram.

The Lonestar Inn, Kerrville. Not a bad place, it’s better than one star though.

One of the laziest days so far. We blogged, went to lunch at Cracker Barrel, read, watched old movies, and then James made it to town. He had ridden about 120kms from Rock Springs. He’d taken a different route than us. It was so great to see him again. He is going so well. We all went to dinner at Brew Dawgz, and shared some of our experiences. He is a really smart guy, and has given us more insight to this country and it’s situation. Tomorrow, we will all ride on to Fredericksburg, we’ll stop there, and James will carry on to Johnson City. 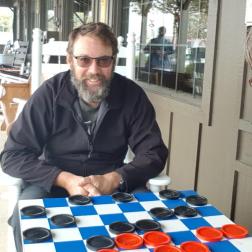 Cracker Barrel was pretty good, and we really didn’t need dinner. It was fantastic to meet up with James again, and we always enjoy his company. Cheers James.

It is coming up to Thanksgiving, which is the big holiday here. Everyone will be celebrating with family and friends, so we will hold up in a nice hotel, and hopefully find something open to go have a little celebration too.

2 thoughts on “Over The Top, Down The Road.”