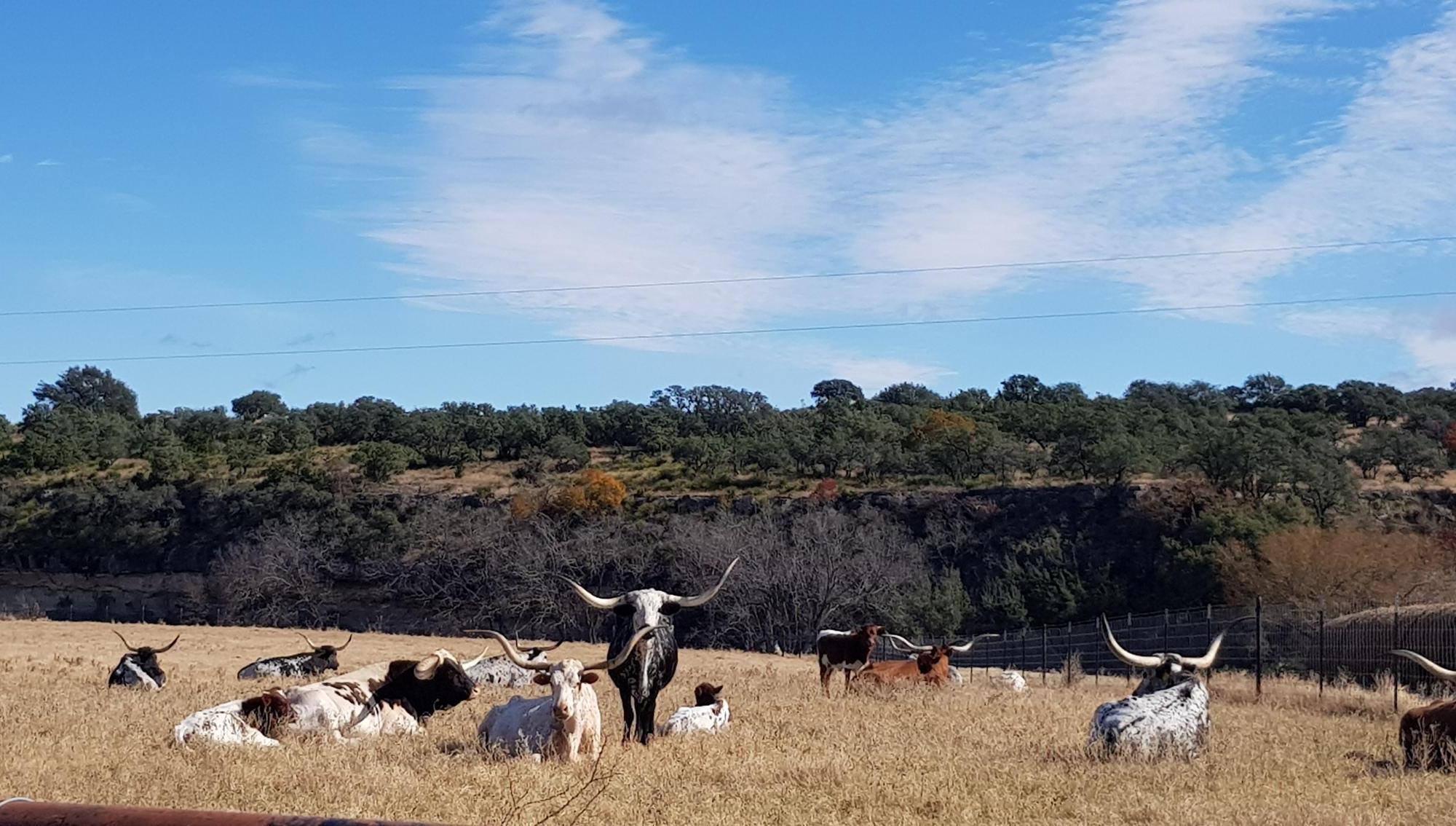 Our final days riding! Both of us were in a bit of a funk. This is not unusual at the end of our adventures. Breakfast was a bit better this morning, as we got there nice and early, smashed down as much as we could manage, then loaded our patiently waiting bikes, and hit the road to Austin. The morning was overcast, but not too cold, and it promised to warm up nicely. Leaving town, we were straight up our first hill, for about 6kms, then hit the rolling, rollercoaster hills of the 290. This didn’t last long, as all our devices and mapping apps, told us to get off, stay on, do a U-turn. Aargh, you idiots, which way? So we stopped and conferred, and made the decision not to ride on the busy highway, and take a slightly longer route on the farm roads. 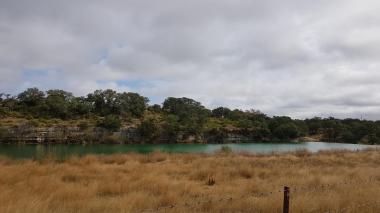 It looks colder than it was, we were nice and comfortable. The farm roads were very pleasant riding, with nice things to look at. Especially the cows.

When we’d checked the routes and distances, the night before, they all said about 75kms. That sounded like a pleasant day, and comfortable for our final ride. So by the time we had done 40kms, and were looking for a lunch spot, and re-checking the distance, we were both horrified to discover that we still had 50kms to go. How the hell did that happen? We had only detoured about five kilometres, it should have been 80kms, not over ninety! Oh well, we just have to carry on, and we were actually doing pretty well. The rolling hills were okay, with the odd steep little bugger thrown in, even a water crossing, and some quiet roads, so we shook it off, and rode on. 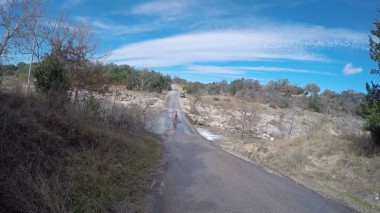 We watched a car go through, and it looked a bit deep, but Will did it easy, so I just followed suit. Phew, no spills, just a little thrill.

Getting a bit hungry, feeling the hanger getting stronger, and the hills getting steeper, we needed to find a spot to take a break. A convoy of dickheads in hotted up sports cars zoomed passed us, at super close range, increasing the Hanger, so we located a church, which had some outdoor pews, under cover, and made some lunch. It was a nice spot to chill out, and even had a tap we used to refill our water bottles. It was warming up beautifully, and for most of the day we had a helpful tailwind. 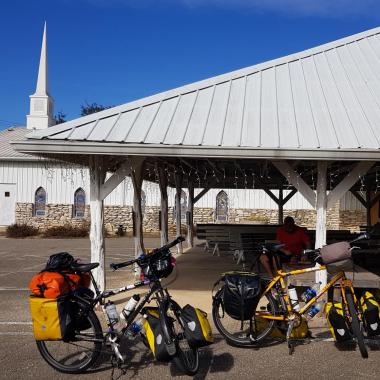 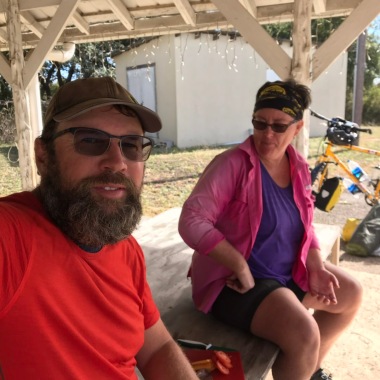 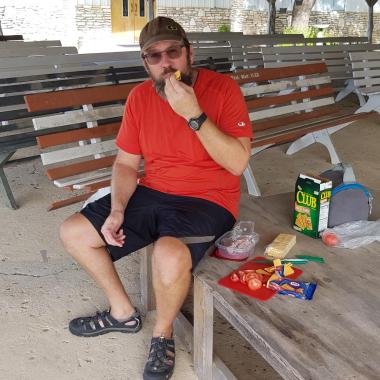 The Fritzhugh Church was a nice building. It was even nicer because it had somewhere for us to chill out, and water to drink. Thank you! Our final on the road lunch was the standard, cheese, meet and tomato, but no rolls, so we substituted in, crackers. Yummo!

So off we trot, refreshed and rejuvenated, up some more hills. We popped out onto a busier road with a pretty good shoulder, and some more rolling hills. The shoulder disappeared, due to roadworks, and a few times we had to stop and let the build up of cars pass. It was not a fun bit of road, but before too long, we were back to super wide shoulder. So now we are in suburbia, with semi-City traffic, a great shoulder, a moderate tailwind, and we are pushing pretty hard. Lots of road cyclists on the other side of the road, heads down and super serious about their ride. We waved at them all, and a couple looked over, but none waved. Probably couldn’t comprehend what we were about.

Quite a few uphills, but they were no biggie, some nice fast rolls down, with the only tough part being a major road crossing to get on the 360 highway. Once on here, we were just up and down through the hills, over the Colorado River, and into Brad and Lisa’s subdivision. It was a very nice area, with some beautiful homes. Christmas is definitely coming around here, with a few people out putting up decorations. We both relaxed, and took a few deep, calming breathes. We are here. We have done it! 5,200kms of cycling. Unbelievable! Almost five months of travel, and we are done.

Lisa and Brad came out to congratulate us, and welcomed us into their home like long lost family. We’d met twice, spoken briefly, and felt like old friends. It was great. We showered, ordered Tex-mex, and had a few drinks, before crashing. What an amazing day, what an amazing journey.

So Lisa and Brad looked after us so well. They did everything for us, feeding us so well , I think we might need to cycle another thousand kays to work it off. Saturday we just rested, and enjoyed chatting with them. Will went to Costco to help with the grocery shopping, while I sat and watched the squirrels. Lisa and I went for a beautiful walk around the neighbourhood, then we enjoyed another fantastic meal, with lots of interesting conversation. 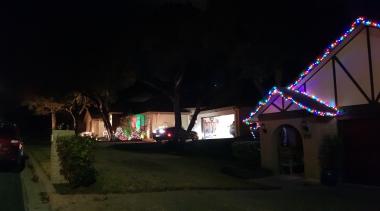 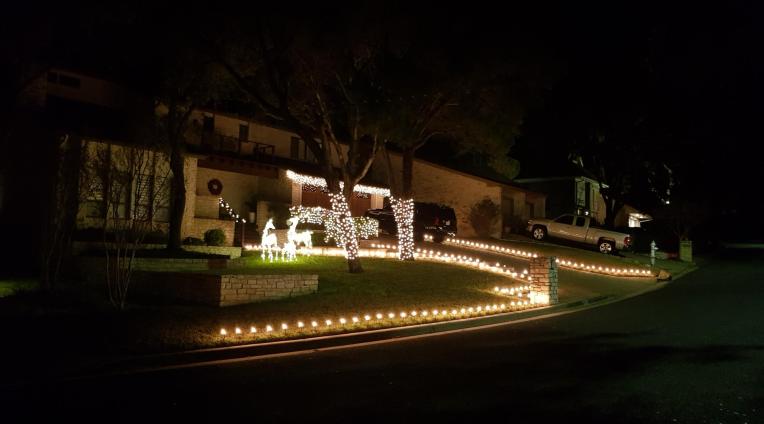 The street starting to look festive. Good job neighbours, I like it.

Sunday was not as nice weather, but we decided to go for a tour of downtown. It was really interesting, and we took an impromptu tour of the Capitol Building. There were lots of great food places, bars, and Texas shops. Brad took us through some of the elite neighbourhoods, before we stopped at Rudy’s for real Texas BBQ. We took it home, and demolished it in no time. Delicious! 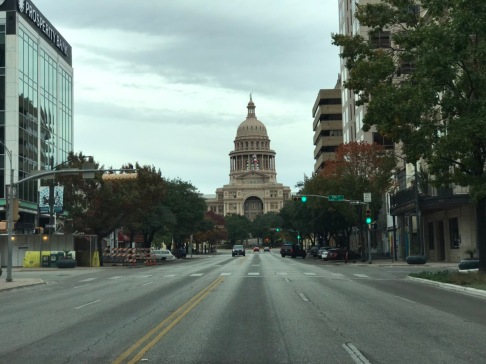 The Capitol Building. Once it was the biggest and most visible building in the city, now it looks tiny compared to the high rises. But it is still the most beautiful, built using local red granite. Gorgeous.

Loved the old furniture, and the unique hinges on the doors.

Monday was pack and wait day. Our friend John (The Crazy Texan, from our ride through Canada) was coming to collect us. He was due about lunch time, so we packed and relaxed, and just hung out till he arrived. Brad and Lisa were so easy to talk to, the time just flew by. John messaged us when he was close, and we prepared some lunch. Left overs from our days of feasting. It was yet another great meal, and then it was time for us to head off. Wow, this feels awful. I don’t want to leave them. I’m going to miss them. Ugh, this is the worst part of these things. Yeah, the mountains and hills were hard, but in a good way. The weather wasn’t always great, the hotels, campgrounds and stuff were not always super, but leaving these new friends, well that is just unpleasant. 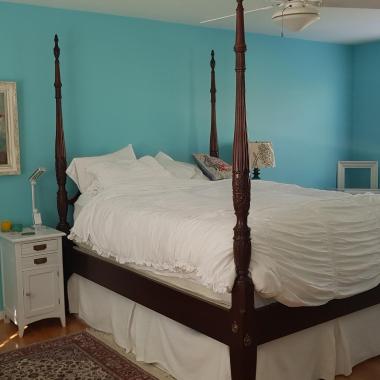 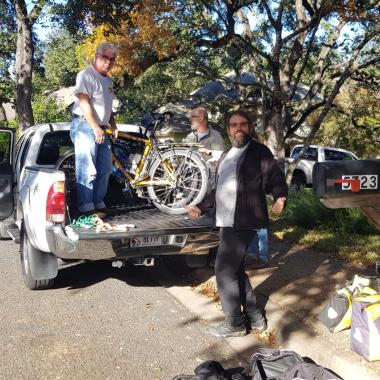 John, the crazy Texan arrived to drag us away, only to spoil us himself. Although that Princess bed was tricky to get into, it was as comfortable as it looked, and hard to get out of. Especially when Lisa told me I didn’t have to get out if I didn’t want to.

We dragged ourselves away, and hit the super highways. John drove well, and we arrived in Fort Worth about three hours later. It was just highways, traffic at high speed, and the usual guff. After a brief tour in the car, of the area, we pulled up in the Condo car park, and got everything up to the apartment. I’m starting to feel emotional and nostalgic already. John served us Chilli, beers and wine, and we chatted away. Next minute, it’s 1am, and Katie is due home any minute. Unfortunately we are shattered now that we realise the time, and pass out, right before we get to meet her. Probably for the best.