An interesting day. We got up early and treated ourselves to a cooked breakfast in the mess. Then the final car packing. It seemed to take forever, but the boys cycled off at 8:30am. It did feel good to finally begin this epic supported cycle adventure along the Canning Stock Route. A year of planning, talking and preparations, and we have started. 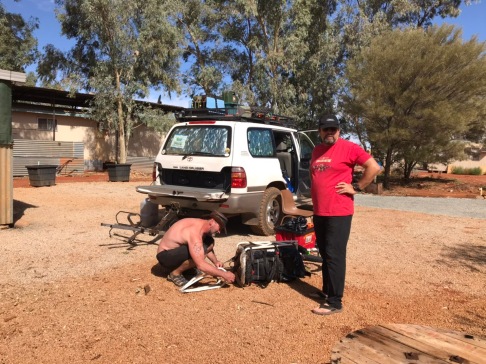 Are we just delaying because we are nervous, or are we being cautious to ensure we have a good trip? So much preparation, but Prior Preparation Prevents Piss Poor Performance, right?

As you know, there is always at least one thing that doesn’t go right, and on this trip, it just happens to be our satellite phone. The phone is functional, the sim is activated and paid up, but it doesn’t seem to connect to the network. With many attempts, and phone calls to the support for Inmarsat, we conclude it needs a firmware update. This requires a windows computer. We don’t have one. The camp are not authorised to lend us theirs, so with more calls and enquires, we decide the Wiluna Post oFfice is our only chance. So the boys cycle the 10kms back to town, I pass them and spend an hour or so at the post office, using their ancient and dust filled PC, to try and get this bastard working. The PC wouldn’t recognise the phone. Aaaggghhh! Then the computer had a mini crash. Bloody hell, I’m over it, and I’ve given up. Stiff bickies, we have the spot tracker, two Eperbs, and the phone will still call 000.

So the boys reached town, got themselves a pie and small ice coffee each ($20) and carried on. I fuelled up the car, and carried on. Some photo stoppages, and then I headed off and took a 10km detour to check out North Pool. It was a nice picnic spot, but too far for the boys to cycle in and out. As I came back out, I couldn’t see any bike tracks, so headed back towards Wiluna, to locate them. Only a couple of kays, and there they were coming over a rise. We had a quick chat, and planned the timing for lunch, before I left them in my dust. This is feeling pretty good. 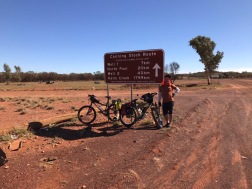 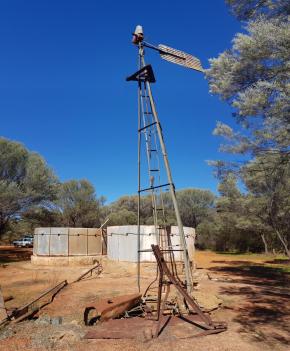 Day one, Well One, and we are feeling excited.

I only drove at 60km per hour, because what’s the rush, and at the 15km mark, spotted a great lunch stop. I pulled in and readied Jens Cafe, for my first customers. It wasn’t long before they arrived, and we enjoyed a relaxed break under the shade of the awning, and a lunch of steak and salad wraps. Max was super spoiled, as he got a cold can of coke, and more than just Tahini, in his wrap. On the boys rode, while I packed up and took my time. 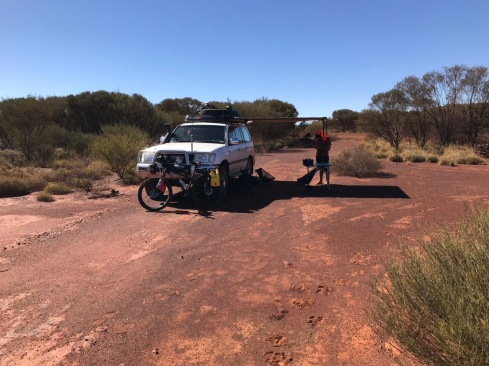 North Pool, Lunch, and the good start of the track.

We leap frogged like this, until Well 2, where I located a nice flat shaded area for our camp. I made a Pork and veg stew, in our camp oven (which hasn’t been used in well over 10 years), and we considered our days. The roads were brilliant, right up to the turn off onto the track proper. Here, I thought we would have a couple of days of reasonable farm roads, as there are many stations in this region, but it literally became a track when we turned off Wiluna North road. Wow. Only 2kms to the Well. All in all, it was a good first day. The boys cycled 62kms, which was a nice start. The only annoying thing, are the flies. They are currently diabolical. Hope they get sick of us. 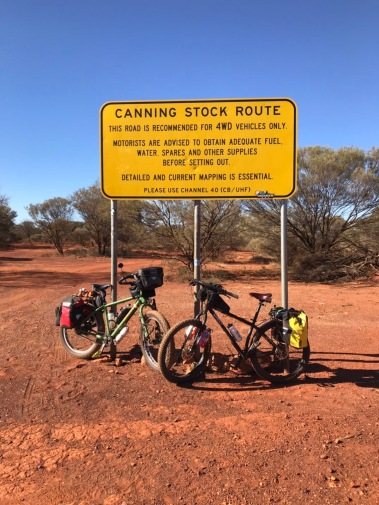 It was cool to get on the CSR proper, and locate Well 2. 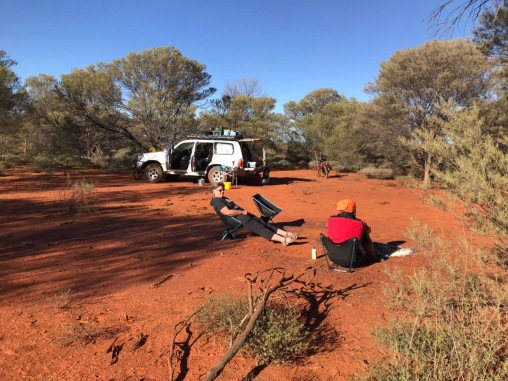 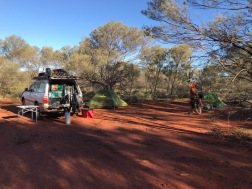 First camp site, in the shelter of the Mulgas, and we’re cooking on the fire. Feeling good.

Not enough kilometres, in normal circumstances, and Max is a little in shock. But, there are things to look at, lunch breaks to have, and this track is not the usual cycling trail. It is slow going, even for me and the old girl. Lots of washed out track, and rocky granite outcrops. It is beautiful, and going slow is definitely the way to do it. Go easy, and hopefully we won’t have any catastrophic failures.

We had a slow morning, getting tyre pressures right, making packing adjustments, and enjoying the morning before the bloody flies set upon us. It didn’t take long. These little c#*@s of things, inspired my first poetry of the trip. It is good, but is one hundred percent, adults only, and may offend some readers, so I’m not posting it. If you are keen to check it out, I’ll be happy to share it with you privately. 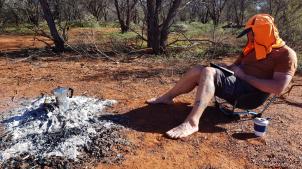 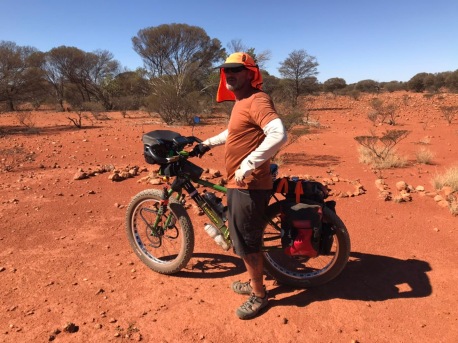 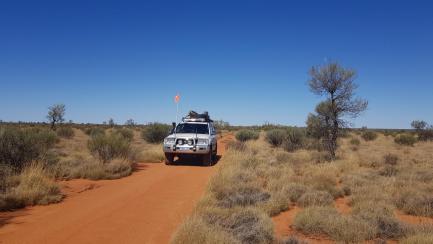 Little Italian Espresso maker is an absolutely winner, and gets us going with quality coffee. Lots of people spend time on the Gibber Plains leaving their signatures. Pretty funny.

Will is getting the hang of Sandy, the Surly Karate Monkey, and already thinks fatter tyres would be better. Minimum of 3.5’s, the sand is much tougher for Sandy, with 2.8inches, and Max on the Troll (3.8inches) does it much easier. Some of that would be fitness, but time will tell. There is a lot worse sand to come.

Jens Cafe is a winner for the cyclists, and the changing colours are great for photos.

Well 2a isn’t a pretty well, and is no longer in use. It is situated on top of a granite outcrop, and we found a decent spot, with shade, flat ground, and a fire pit. It’ll do. I did a little drive around, and there wasn’t really much within a couple of kays. The boys turned up, we made the call, then set about erecting our camp and collecting firewood. As we were doing that, Darryn, who we’d met at Gunbarrel Laager camp, arrived. He decided to stay, and we all enjoyed a fantastic night, around a relaxing fire. On day one, he’d driven out to find Max, to give him his phone charger he’d left behind. Given, it wasn’t a huge drive for Darryn, but a very nice gesture all the same. Thank you Darryn. 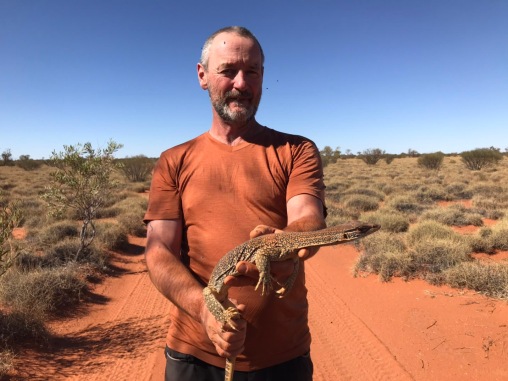 The guys made an earlier start today, mainly because the flies were out even earlier. Man they are so annoying. After a nice breakfast of bacon and egg wraps, a proper coffee, and another chat with Darryn, they rode off. Darryn and I leisurely carried on the packing, before he left me with my final few chores. He had a drone, and wanted to get some sneaky footage of the guys on the track.

After about an hour, we all caught up, at the top of a small dune. So far the track has not been terribly difficult, just slow and steady. I’ve hardly gone over 20kms per hour, but I don’t care, it is enjoyable. After a short break, and a couple of cookies, Darryn left, then me, then the cyclists. 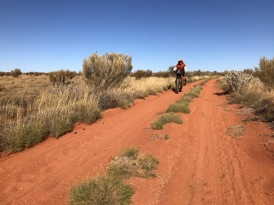 Top our first dune, and it really is a little disappointing. I was ready for the soft sand. Maybe the next one, when do they get serious Will?

Another ten kilometres was the designated lunch time, so when I’d reached that, I started looking for a good spot to set up Jen’s cafe. Once done, I walked back along the track, to try get some video of the crazy cyclists.

Lunch was quick today, the boys keen to get away from the flies. I casually packed up my cafe, and plodded along quietly. It was changing from sandy creek beds,traversing into granite outcrops. All slow. Mostly second gear, until I reached a nice flat, open area, where I actually popped her into third. Not for long though.

Coming into Well 3, Will called me on the radio, to let me know it was a little tricky getting in. He was right, and I needed a little guidance from the guys, to cross the creek, which was dry. The Well has water, and we decided to stay. Wash a few things, and enjoy ourselves. We’ll also wash ourselves. Both Will and Max have been spraying themselves with a garden sprayer, then wiping themselves down each day. I’ve just been using wet wipes, to save water. I’m really looking forward to a little wash.

Although the water had a strong Sulfur smell, and looked like strong tea, it was nice to have a wash with soap. Will set up the shower bag, and made a little wooden platform out of sticks, and we all enjoyed a wash. We made a nice fried rice for dinner, in the camp oven, and relaxed around the fire. A couple of red wines, gazing at the incredible night sky, and our beds were calling. Another good day on the

I had a rough night, with leg pain, and the old fibromyalgia crap. It happens sometimes, so I was very slow  to get going. Will and Max were full of beans, and got onto coffee and breakfast. Max has a very good, morning pack up routine, similar to ours, and has all his gear together before he starts coffee. Both the guys tend to sort water and the cold food rotation. This entails swapping defrosted water bottles for frozen ones, fridge to eski. So far this is working well, and everything is in good order.

The guys rode off just after eight am, and I’m just chilling out a bit, before getting going. I have a bit of packing to do, and some guitar playing, and some bird watching. There are lots of birds here. It was nice to wake up to there morning chatter.

The drive was pretty cruise today, I even busted the old girl into fourth gear, and hit 60 kms/hr for about five minutes. We passed some cows (5), and I spotted a great shaded area, for Jens Cafe, and lunch. By the time the boys caught up, lunch was ready, and the flies were getting annoyed waiting for them. 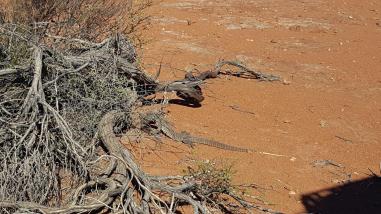 First bit of real sand today, in between the rocky bits. My first sand goanna, he was happy for me to take his picture.

We entered Cunya station, and enjoyed the view around the salt lake. Next we hit a small range, where the terrain became rocky with some taller mulga trees. We didn’t think we’d make it through the station property (it apparently takes 3hrs in a car) and it was too late in the day for the guys to do it. So I located a suitable spot, and pulled in. It really wasn’t long before the guys were here. Officially we are not supposed to camp on station property, but if you have to, you have to. We were very careful not to leave any evidence of our stay.

We had a great night, a good fire, and sleeping out was different. A bit cooler, but great to watch the night sky changing.

It was an amazing night sky, with a billion stars, and we all decided to camp out, no tents. A little cold for me, but still very nice. Our first day getting over 50kms. Yay!