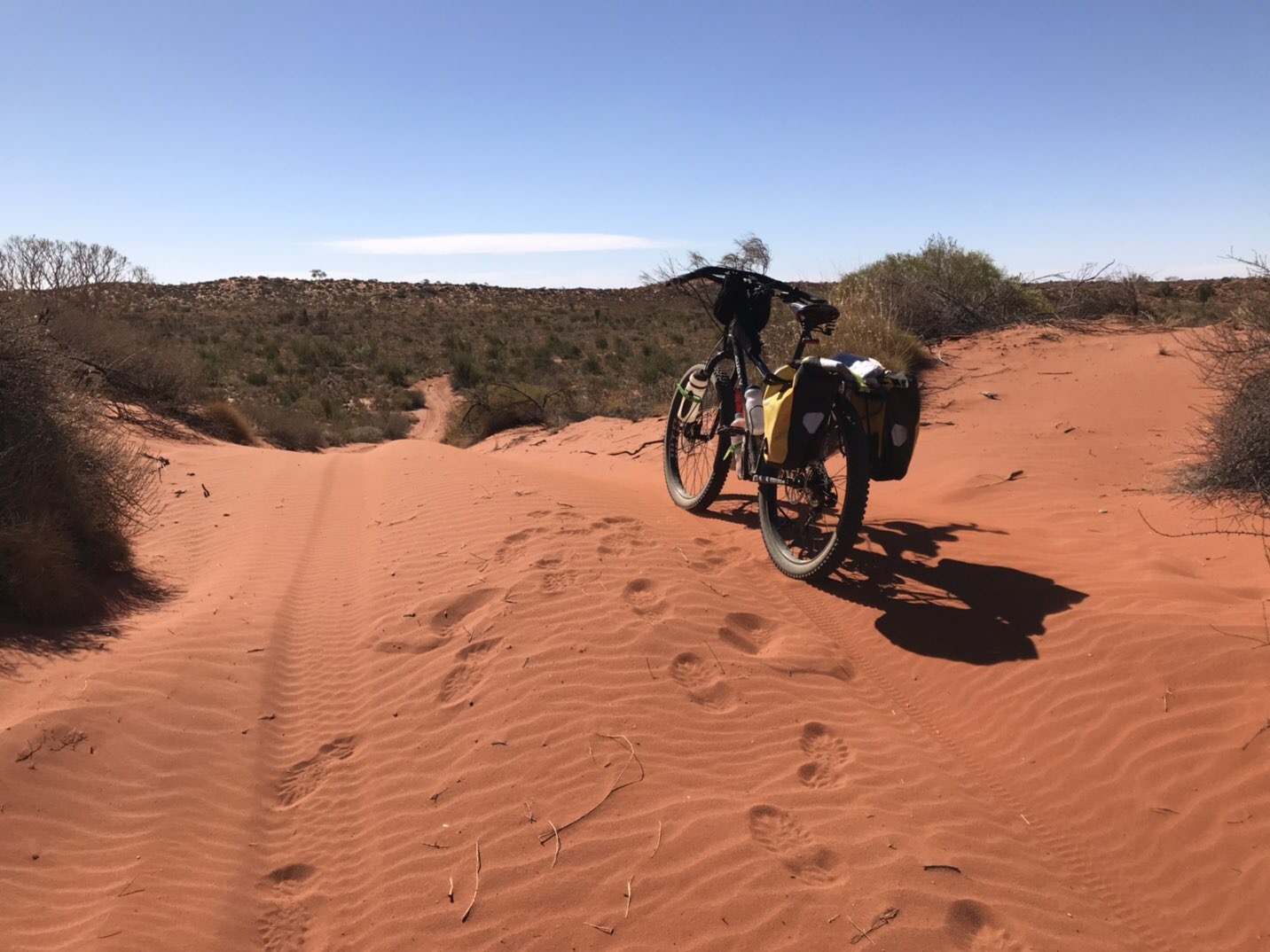 The boys left nice and early, and I made some ham and cheese scones for lunch. I tried a different method, flipping the oven over regularly, instead of coals top and bottom. It took ages, and was nowhere near as good. 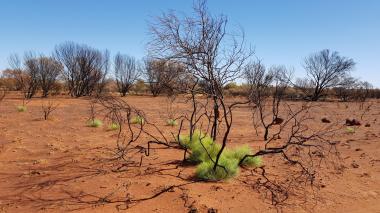 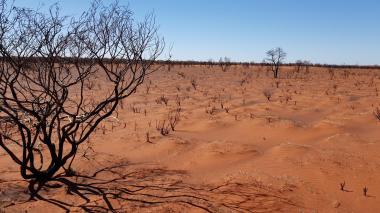 Wow, the apocalypse has hit. But life just bursts out in bright green. Amazing.

First Dunes finally arrived. I was excited, but it certainly shook the cyclists up a bit. Slowed them both down, especially Will. Sandy doesn’t actually like the sand. Who knew? Will said he could get two thirds of the way up them, and had to walk the last jump up. He lowered his tyres to 10psi, which made it better. Poor Sandy also had a thorn in one tyre, but the goo sorted that out, no dramas. No need for repairs, just keep on peddling. 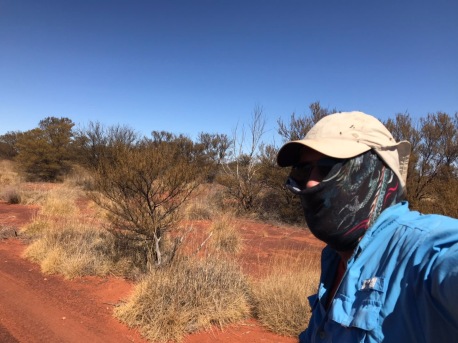 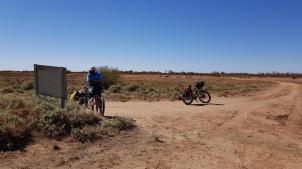 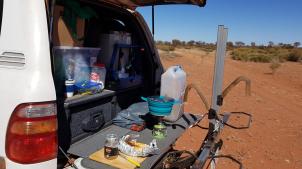 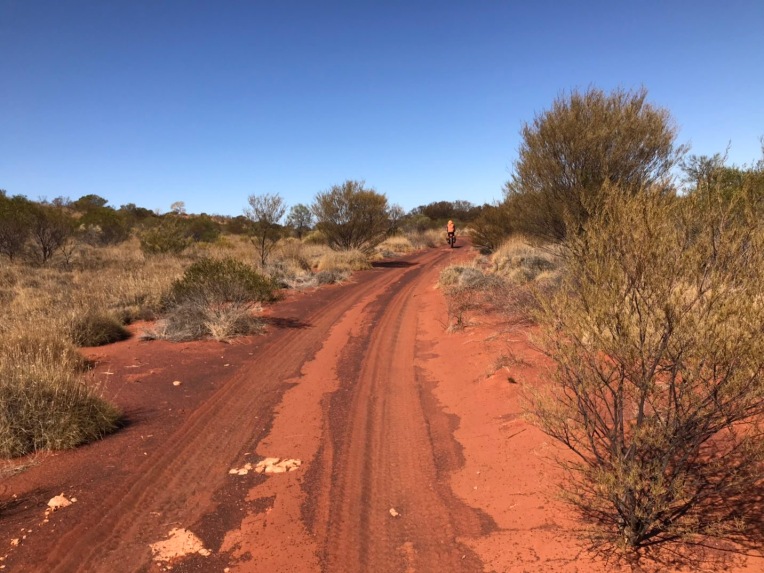 We are all noticing lots of camel tracks, and just can’t seem to spot any. Bloody things are well “Camelflaged “. We are sure to see some though, I’m pretty sure Australia has the largest population of feral camels. 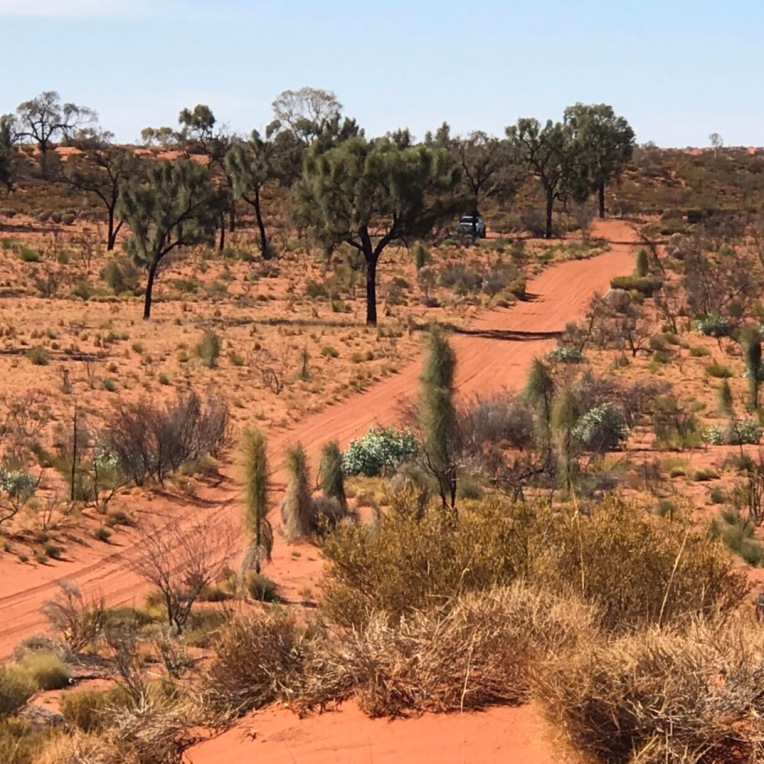 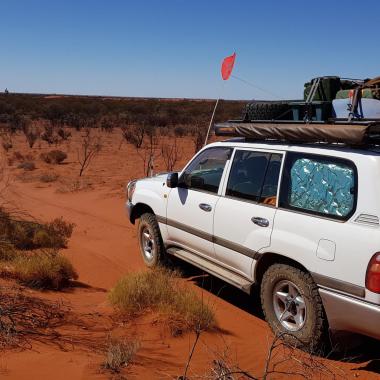 I found a good little spot under some nice Desert Oaks to wait for the boys and have lunch. Unfortunately, it was over a big dune. Oops. 😉🚴‍♀️

So Max headed off towards Well 12, with 18kms of dunes, and a salt lake to get through. Will and I cleaned up after our bacon wraps, packed the stuff and loaded Sandy, the Surly. I am really enjoying driving up and over the dunes, I’m well over the corrugations, and the rocky parts too, but overall it is fun. So Will had to passenger for the rest of the day.

Lake Aerodrome, named because they thought they could put an airstrip on the salt lake, was spectacular. With the sunlight, it looked like it had water in it, but it didn’t. We enjoyed the drive around it, and we both reckoned Max will smash it out on the lake. We would!

The wind has really picked up this afternoon, and it isn’t that pleasant. We arrived at Well 12, which had a nice camping area, with old, craggy, Desert Oaks. There was another one of those “trailer short drops”, which had been gotten at by some animals, toilet paper caught in the spinnifex all around it, yuk! The Well itself was restored in 2003, and had really great water. Crystal-clear, and tastes great.

Will and I set about getting things in order for the night, which was a bit tricky in the increasing wind. It was also a little tough to find wood. Not too much longer, and Max arrived, full of adrenaline and joy, at conquering some of the bigger Dunes we have encountered. As expected, he busted out across the salt lake, taking some cool video. He is truely amazing, in his determination to achieve his goals.

My stupid “syndrome”, has come out to annoy me, so I was not in good spirits. After dinner, I left the boys to clean up, and went to bed early. The boys enjoyed the last of the beers (only two left), and a plastic cup of wine, before getting out of the cold wind. The end of day eight on the track.

The blustering Easterly was still with us when we awoke, and none of us were feeling the love for it. We procrastinated and faffed about, before deciding that Max would bust out, and ride, until he’d had a gut full. Will had already decided on a “rest” day in the car. Just as we had made the final call, two other vehicles rolled into camp. Mick and Val, Ian and Sharon, all from Mackay, were excited to have caught up with the elusive cyclists. This gave us all a boost of morale, and got Max on his way with some good positive energy. 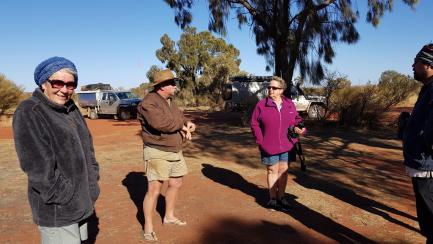 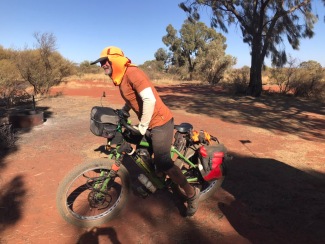 These guys had been tracking the cyclists along the way, and loved that they found them. Max finally pushed off, and we got to our jobs.

Will and I got to sorting the camp, packing the car, and topping up our water from the good quality well water. It was about an hour after Max left, that we were in the car driving. I started the day driving, and then after we’d rendezvoused with Max, who was enjoying his day alone, I let Will have a drive. It is quite tiring, and full concentration.

There were a lot more dunes today, but not too many big ones. The old girl was enjoying the track, but Max reckoned he had a few issues with us “car” drivers. Wrecking the lead up tracks onto the dunes, by having cross ruts and making big sandy berms in the middle of the track. Agh, what are you crazy cyclists doing on our track anyway! Fuck off! Ha ha ha, but all of us were actually having a pretty good day. 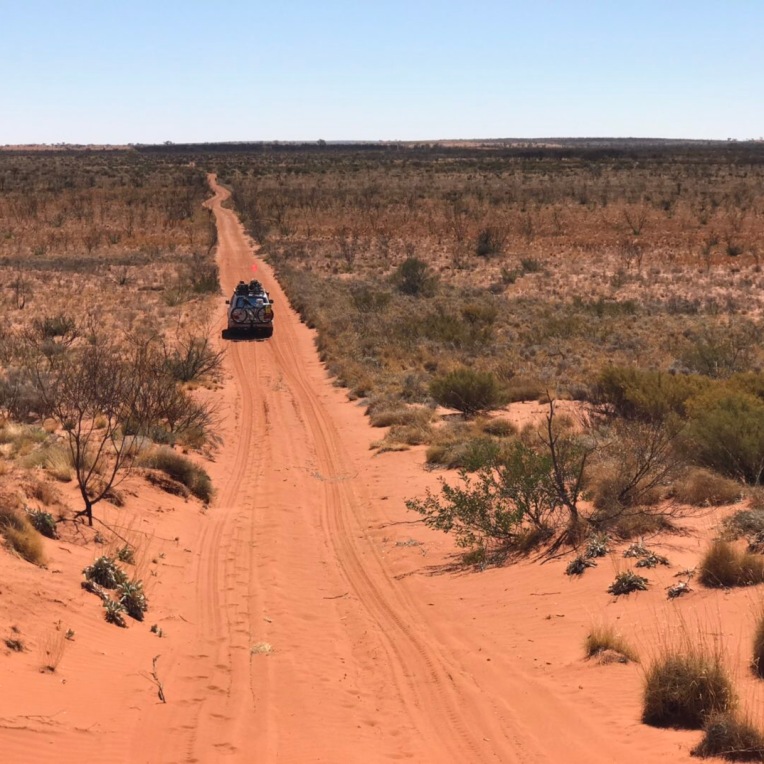 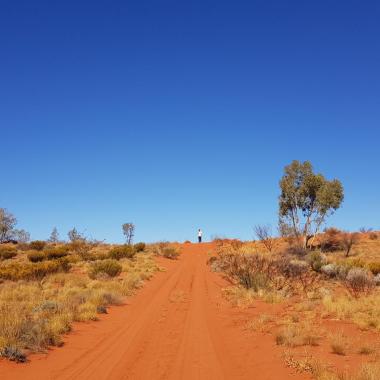 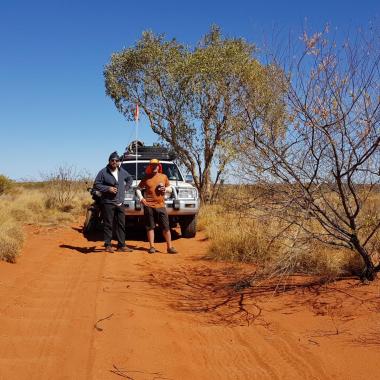 It’s really getting red out here now. Love these colours.

After lunch, we were hit with a bunch of enormous corrugations, and we notice fresh camel tracks. They followed the track, for over four kilometres, which got us a bit excited, as we were sure we’d come across them. But nope, not this time. Bloody things are a bit sneaky, and very well camouflaged. 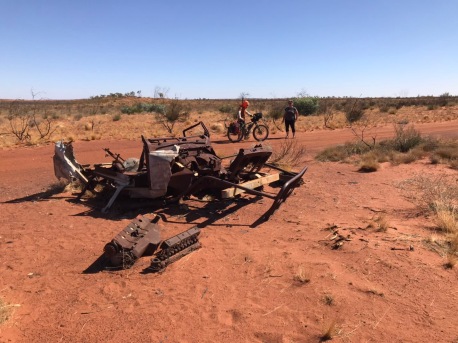 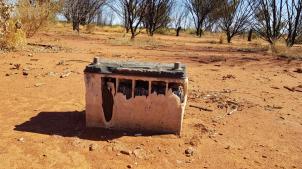 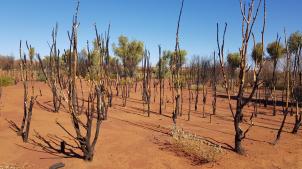 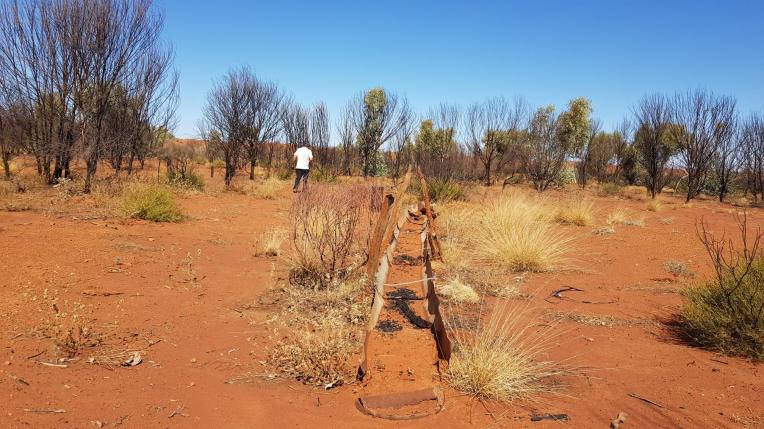 More wreckage, our first vehicle. Well 13 is in ruins, and lots of burnt areas around it. They are quite beautiful in a kind of shocking way.

Another three vehicles caught us, Rod, Fred and Darryl. They were friends from Victoria (all in their 70’s) and all driving their own cars. None of them wanted to be a passenger. They were nice guys, and we all met up at Well 14 for the night. It wasn’t a big camping area, and the Well was derelict, but it was fine for the lot of us. So after a rough start, we ended with a good note, and finally the wind died down on dusk. It had been really annoying. We also drank the last of our wine. Oh dear, this going to get tough. 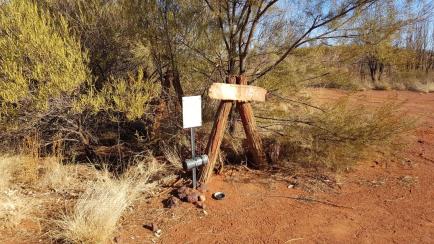 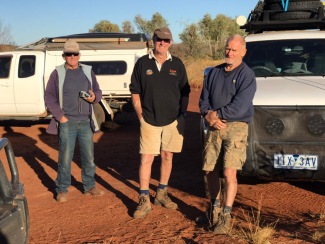 Well 14, in ruins, a small area to camp, and just enough wood for us all to share. The older guys didn’t cook on the fire, but did enjoy sitting with us sharing stories.

A good morning at Well 14, the old guys buggered off early, then Max and Will were on the bikes by 8:10am. This left me to potter around and make some scones. While they were cooking on the fire, I got to packing up the camp. No rush, that bloody wind had picked up again, a strong gusting headwind for the boys, and it would slow them up a fair bit.

About 12kms along this mornings track, Max noticed a placard in the scrub. It had “Noah’s Camp – 1 Hilux, 2 Subaru’s, trapped by flood waters July 1984 for 3days”. Huh, nice one, we’d love to find out about that story.

I caught the boys up and they were in good spirits, and happy to carry on to Well 15, and water. Little did they know what they were headed for. Dunes, dunes and more dunes. In between the dunes, was a mass of burnt out country.  It was very apocalyptic, and a little depressing to be honest. No sign of life at all. Not a little dragon, goanna, bird, or even camel. 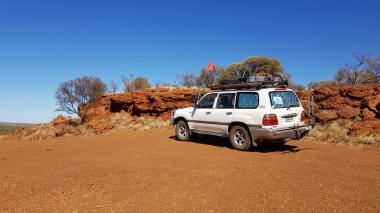 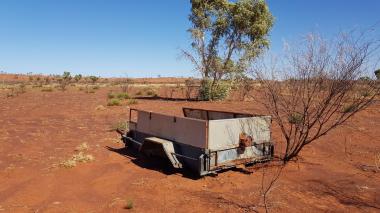 Just after I left the boys, heading for Well 15, I found this lookout area. I drove back to the track, waited for the bikes, left the machines under some trees, and gave them a lift up to enjoy the views. We also saw this abandoned and wrecked trailer near Well 15.

At Well 15, we enjoyed the scones, with cheese and chorizo, for lunch, had ourselves a shower (actually a cup and bucket bath, out in the open) with the excellent Well water, and decided to drive on to Well 16. Both boys had had enough of the tough dunes, and real sparse landscapes. So we topped up our water supplies, and loaded the kids onto the bike rack. The first time it had carried two bikes. We did have to shuffle the gear around a bit, so three of us could squeeze in, but we managed it without too much fuss. I handed the wheel over to Will, and hopped in the back. 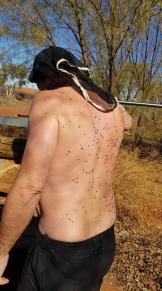 Selfie time…..oops, bath time too apparently! The flies just loved it more when we were clean. Bloody things are so pesky.

After a couple of kays, we stopped to give Max a drive (so he can include himself in the bagging out of car drivers…ha ha ha). Lucky we did, cause Will noticed we didn’t put the locking pin in the bike rack. Phew, both kids still in tact, and secure. After a few dunes, Max had had enough, and Will continued.

It was more dunes, and burnt country, and it went almost all the way to Well 16. Except for one rocky, very technical section, it was 30 kilometres of dunes. Wow. Real desert. Max had a blast, driving the Old Girl up a few dunes, before handing it back to Will, who got us safely to camp. A bit later than we’d like, but with our skills, we had camp up, and dinner done, before the two other campers , who were already there. It was actually a tough and tiring day, and we can all see the fatigue setting in. Might need a break soon, I think.

2 thoughts on “CSR – The Challenges Begin”