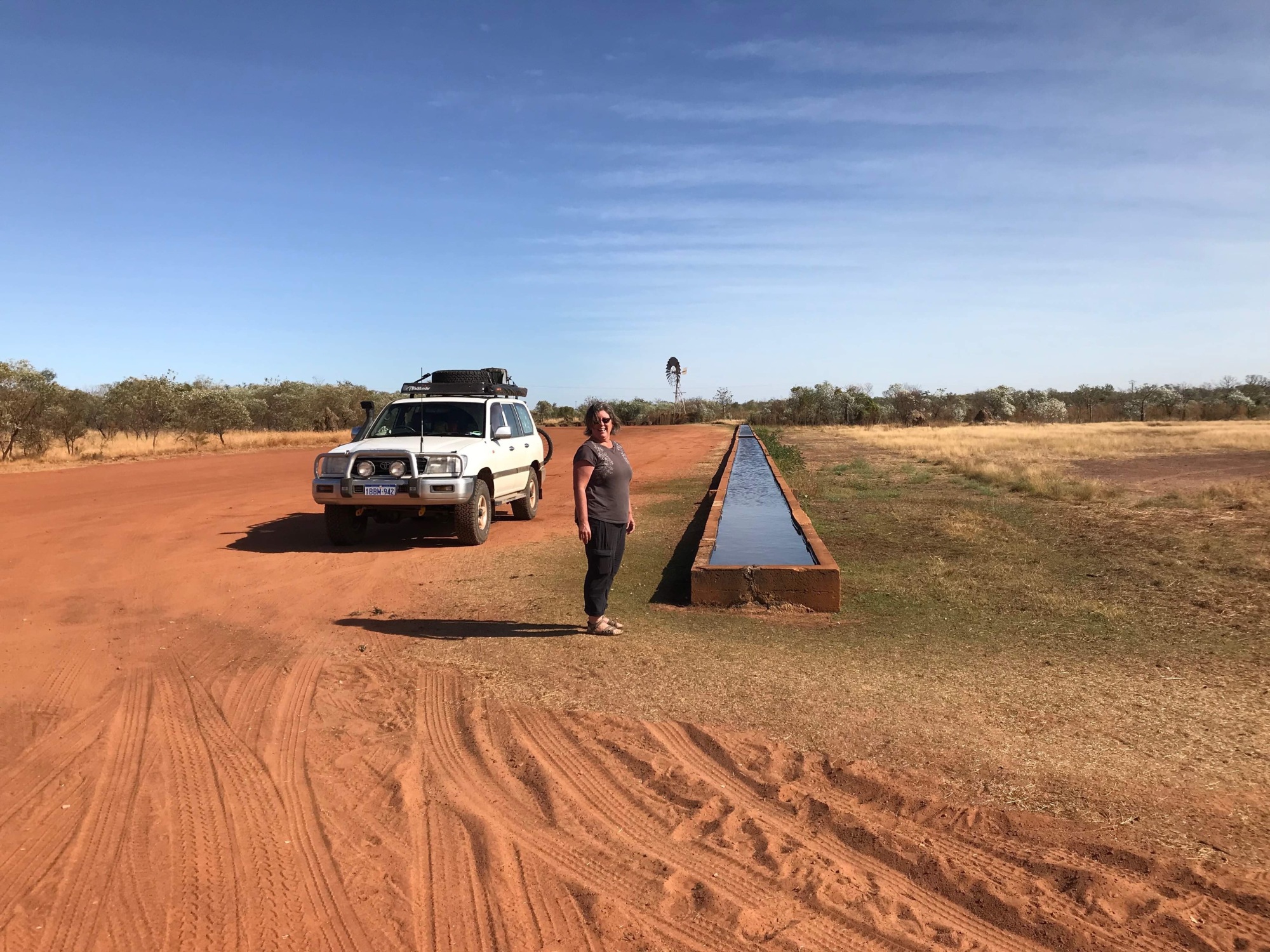 One reason for stopping in Kununurra was to get the leaking rear Diff Lock checked out by the local ARB Agent. Jenny had found a self contained cabin in the Town Center Caravan Park which we booked into for two nights ($120 per night). Early Friday morning the 14th of June, I dropped our Landcruiser off at the ARB Agent and walked less then a kilometre back to the Caravan Park Cabin.

A few hours later the ARB Agent rang and said the Landcruiser was good to go. “Just a bit of oil residue, we cleaned out the air lines, nothing to worry about”. WTF ! No point arguing on the phone, I said “I’d be there in 10 minutes and needed to talk with the Workshop Manager”. 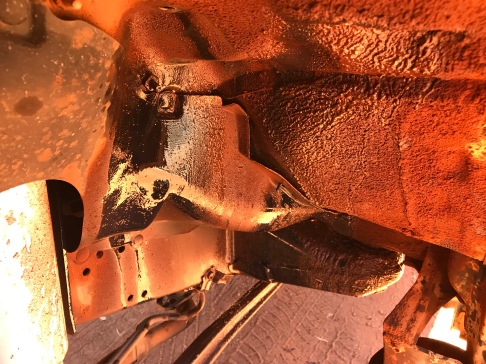 I explained, what the ARB Agent in Newman had said (probably worn seals) & that we had already gone through about 6 litres of Diff Oil. Copious amounts of oil coating the front left hand wheel arch & left side chassis isn’t “normal residue Dustan”. Eventually Dustan came around to my way of thinking, but they were to busy dealing with the peak tourist season, they wouldn’t be able to do the Diff Lock repair for a week and a half. I decided to just get more Diff Oil, book into the ARB Agent in Broome (for car service & Diff warranty repair in 2 weeks). Saturday morning we will be out of Kununurra & headed for the northern entrance of the Kimberley’s, Gibb River Road.

Saturday morning quickly came around our final job was to top up with diesel. We fuelled up with cheap diesel at the unstaffed, prepaid CGL Fuel Station. Only cost 138cpl, we decided to fill up 3 x 20L Jerrycans as well. While there we met fellow travellers, Greg & Linda. They are from Victoria & heading the same direction as us. I mention that we’ll see you on the road. Not realising we’d end up as “Track Mates” from this point on & all the way through to Broome.

While fuelling, up some Old Coot & his Missus were waiting impatiently behind me in their “Universal Thai Built Dual Cab Ute” with Mega Van hooked on the back. They finally spat the dummy when I started loading the two now full 20L Jerrycans onto the Landcruiser roof. Revving the engine loudly they performed a dodgy reversing manoeuvre and headed for a different diesel bowser over on the far side of the CGL Forecourt. Just as they were about to get over there another Four Wheel Drive Tourer pulled into the vacant bowser so their wait continued. With the Jerrycans firmly secured team wiljen headed off.

From Kununurra to the El Questro (ELQ) Station turn off it’s easy tarmac travelling. The 12km dirt road into ELQ is a little rougher & busy with tourist traffic, people love towing there homes around out here. I’d estimate up to 70% of Vehicles are towing a caravan or camper trailer. Still not sure if the added hassle is worth the extra comfort once you set up camp. In the meantime Jenny & I are enjoying the extra flexibility of just being a self contained 4WD.

El Questro is very popular & busy, we found a nice shaded camping spot on some grass & went for a swim. The temperature is in the mid 30C’s. I also noticed on Facebook that an old school mate “Annette” & her hubby John were in the camping area. So we caught up with them for afternoon drinks & catch up on the “good old days”. Last time I saw Annette was probably about 20 years ago. Great to see her & John.

Jenny & I have travelled on the Gibb River Road before back in 1999, literally 20 years ago almost to the day. We had our 3 kids with us then (7, 5, & 3 years) we had to cut the trip short as our middle boy, Hayden developed a bad bout of asthma.

It was different back then, the GRR was a hard core camping trip, hardly anyone towed a trailer or van behind them. There wasn’t  any bitumen upgrades over the escarpments, you could access most of the waterfalls, gorges on the Station Properties free of charge. The road was rougher, traffic not as heavy. Pretty certain the sky was a brighter shade of blue as well 🙂

This time around the Gibb is one big Station Stay, it is fun, beautiful & exciting. Still worth the effort & a great trip. Be prepared for some rough dirt roads & large corrugations, at times we were tickling along at 25km/h on tyres with 30psi in an effort to preserve what ever life was left in the Shock Absorbers.

Jenny & I would definitely do the trip again but go to different places like Mount Hart Station, Kalumburu, Mitchell Falls & Mornington Station. Doubt I’d tow anything, but we’ve learned to never say never and the people we met, John/Annette, Greg/Linda & Bruce/Janet sure did look comfortable in their 4WD, small Caravan combinations !

After an enjoyable short stay at Windjana Gorge we drove the remaining 150kms into Derby, an old Kimberley Port Town that still has a bit of a frontier feeling about it, (Population in 2016 was 3325, nearly half of the residents who live there are of Aboriginal decent). It’s a nice enough town with most amenities & the local Caravan Park appeared ok. On this occasion Jenny & I opted for the tired looking King George Sound Resort for 3 nights ($140p/n). It was sort of ok, quiet, clean, ok location, just old, rundown and it felt like you were travelling back to mid 1980’s when you stepped inside. 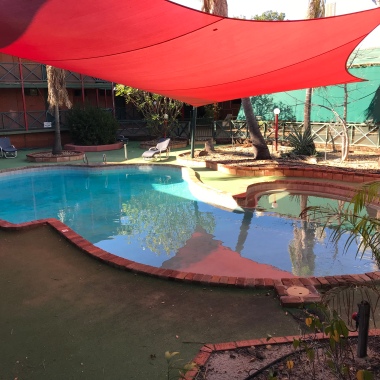 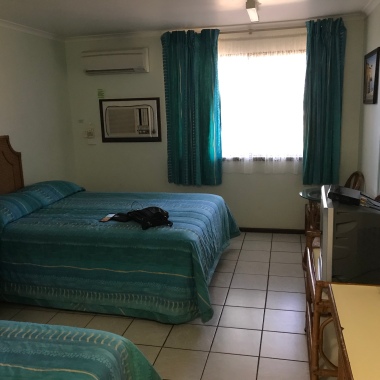 To be fair the price was reasonable and premises clean and tidy, 3.5 stars.

Upon arrival Team wiljen went straight to the Bar, Ron the Barman booked us it to our room and then asked if we wanted a drink ? I looked around, there was a couple of old Bar Flies down the far end sipping on Emu Export Beer. Judging by the rustic decor & the fact there wasn’t any form of tap beer I suspected that a Little Creature Pale Ale was probably out of the question so I just asked for a couple of stubbies of Carlton Dry to quench our thirst, (We had run out of beer about 3 days earlier on the GRR) Mmmm nice.

After 3 days kicking around Derby (not really much to do there) it was time to head for Broome and get the Rear Diff Oil Leak on the Landcruiser sorted out. As stated on this blog in a previous post Jenny & I have previously lived & worked in Broome during the BC years (Before Children), Australia Travels. We spent around 18 months over two occasions, they were great times with many wonderful memories. We were both young, fit & free, on the second stint in Broome we lived at the “Ocean Lodge” on Cable Beach Road, now called Broome Time Lodge for 11 months so it’s a no brainer that we like to stay there when we are in Broome ($135 per night and it’s peak season). Fair price, clean, tidy & convenient location.

While in Broome we did the usual touristy things, wandered around China Town, had a beer at the Roebuck Hotel, checked out the Broome Port, flew the DJI Mavic Pro Drone along Cable Beach at Sunset & caught up with Victorian track buddies, Greg, Linda, Bruce & Janet at the Divers Tavern.

Of cause on the Monday we dropped the Cruiser off at the ARB Agent in Broome & the Bicycle came in handy for me to get back to Broome Time Lodge. Minshull’s did the service (expensive) no problem but didn’t repair the leaking Diff Lock. The excuse was because Mandurah ARB hadn’t given them the go ahead. Gee a bit of communication people ! They could have rung me and told me there was a problem, I do carry an iPhone7 that works ! 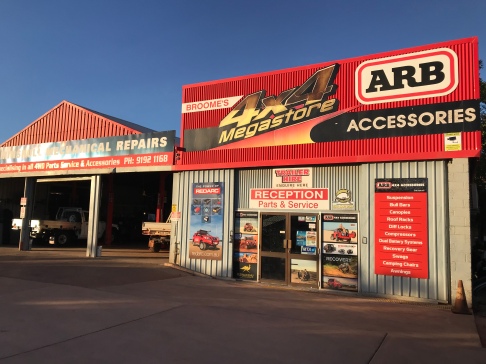 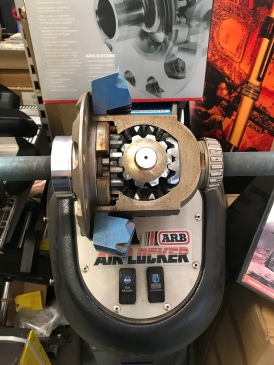 Landcruiser serviced but once again the Diff Lock was a fail. More Oil !

If our Tour had gone according to plan we would have still had 3-4 weeks to get home. Our plan was to catch up with Jenny’s brother John, his wife Debra & family at Karijini NP, visit Mount Augusta (Australia’s largest monolith, bigger then Uluru in the Northern Territory). Travel to Kennedy Range NP, Shark Bay & possible check out the wildflowers along the Midlands Highway.

This was not to be, there had been an unexpected death in the family, Debra’s Mum, Carol unexpectedly passed away. Jenny & I knew Carol very well, she had rented a house off us for 6 years & we regularly caught up with her at family gatherings. Since we were within striking distance from home we decided we would just spend 3 days driving directly to Mandurah (approximately 2100kms from Broome taking the via Marble Bar shortcut ), so we could be there to offer support & attend Carol’s funeral.

Jenny & I took the dirt road back way through to Newman along the Bore Line Road through where the mining town of Shay Gap once was. We tent camped at the Nullagine Caravan Park ($15p/n) and the next day drove through to Mount Magnet where we stayed at the Miners Rest in a self contained room ($120). After no rain for the whole 70 day tour team wiljen spent the last day driving through the pouring rain home to Mandurah, not very happy to be dealing with winter in July. 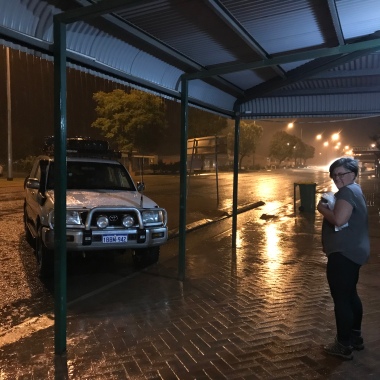 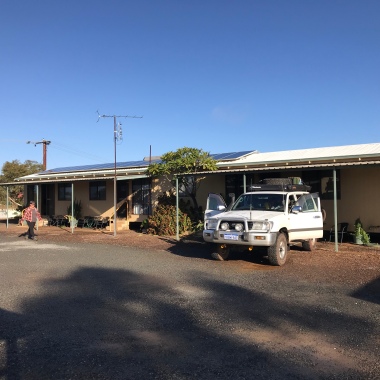 Mount Magnet the rain begins just after we finish dinner at the Commercial Hotel. The Miners Rest was a good place to stay.

Sorry to race through the last part of our trip, I guess the final part of our tour turned into a bit of a fizzle. It’s been hard to keep the blog updated. Lots has been happening behind the scenes. Which I intend to fill you all in on, hopefully soon. We did finally get our Rear ARB Diff Lock sorted out at Mandurah ARB under warranty. I also had the suspension on the Pussy Wagon replaced with beefed up 20mm West Coast coils (Iron Man was 18mm) & new WC Shock Absorbers. It’s heaps better, most of the bush pin stripes we gained on the CSR buffed out ok also. Lastly the Air Conditioner needed repair, the clutch plate on the compressor detached. I suspect it was related to all the corrugations we had travelled on.

Track Mates, Bruce and Janet weren’t far behind us after we got home so they stopped in for 2 nights before heading south then going across the Nullarbor back home to Dandenong Victoria.

So what became of our Cycling Mate, Max ? 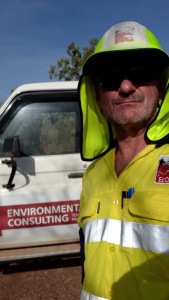 Max rode most of the way to Katherine in the Northern Territory, via Duncan & Buntine Highways. Hitched a lift from Katherine to Darwin, he ended up staying in Darwin, where he spent time cycled around the Top End out to places like Kakadu & Dundee Beach. Max said he also did a house sit for four weeks. Finally he found a job in his profession (Environmental Science) and looks like he’ll be living there for the foreseeable future. You will have to read his Blog to find out his epic cycling exploits. (Max, no pressure but time to update your blog Mate 😀)

The 2002, HZJ105 Landcruiser, code name Pussy Wagon (because it’s a big scaredy-cat and always hunting out the off road “Chicken Tracks”) covered 8335kms during the 70 day tour. Still heaps of Australian Adventuring left in the “Old Girl” with a lowish 235000kms on the odometer.

Thanks for reading, back soon. Will, Jenny & Rodgie Dog.