We can only manage to average about 30km/h.

Jenny & I headed down to the Diveagar Beach at 7.45am to check it out, we had heard it is pretty good. Being from Australia we are very blessed with great beaches so we found Diveagar to be a little bit deflating. The issue wasn’t the grey black sand that’s just life. It was the rubbish, empty plastic bottles, foam containers, chewing tobacco pouches, etc. There is a lot we have learnt to love about India, but how the country manages its waste needs a massively big improvement. Sorry India, just my opinion based on 6 weeks and nearly 5000kms on a motorbike around your back roads in the middle & western coast areas of your country. It actually makes us both a bit sad. I wonder if our planet can cope with that degradation on the long term. 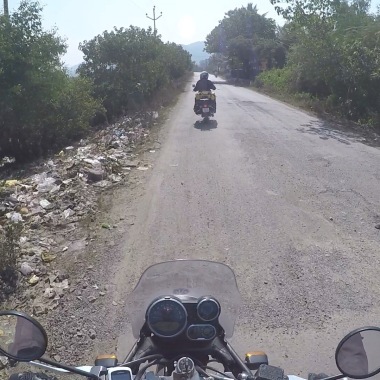 This is a regular view on the outskirts of towns & villages,  sorry my Indian friends but we just can’t get use to it. The Villages are usually fairly tidy & cared for.

On a more positive note we rode some great mountain backroads, ok there was a few potholes but if you ever get a chance check India out on Google Maps, the place is a spider web of roads, there is honestly no chance of keeping up with all the road maintenance, particularly in a country of such extreme climates & monsoons.

Wow, Wow, Wow, I can not even comprehend how to explain today’s ride at a level that you the reader can fully grasp. I’ll have a crack, but you really need to experience it for yourself. Today we only conquered 155kms of Maharashtra west coast mountain back roads it involved about 6 hours of riding time. Twisty, windy, good, then bad roads. With multiple towns, villages & beach vista’s, thrown in. Oh don’t forget the “Speed Breakers” in Oz we call them Speed Bumps…..Jen & I call them Ball Breakers. Plus remember you need to keep a constant eye open for the Psycho Crab Walking Public Buses & the Crazy People Moving Mahindra Jeeps. It all means bleeding off another 15km/h from your average velocity just to have a chance of turning an “oh shit” situation into a gee that was a close one !!!

We did get the opportunity to ride through “Jungle Book” stuff, bushlands/forests complete with monkeys & mongooses scampering across the roads. It was seriously amazing. There was also the how to kick start a Bullet routine on several occasions, I’ve improved but still have a way too go. Davo GPS decided to deposit us at a ferry in Dabhol, which proved interesting, we were charged a whole 80 Rupees, about $1.60 for a 10 minute vehicle ferry ride across a large tidal river.

Once we reached the other side it was nearly 4pm & we knew there was absolutely no hope in reaching our original destination of Ganpati Puly a further 90kms away before sunset, so we desperately tried to find a viable alternative within an hours striking distance. The only option seemed to be Guhagar about 10kms away close to the coast. We had spied a Sea Wind Hotel in Guhagar sign & thought that should do.

There was zilch chance of checking our electric gadgets as too where we should stay as we have not had mobile phone reception or wifi for the past two days. We did crank open our Lonely Planet India on the iPad Kindle during our roadside lunch break, but that seemed to only focus on the places that are on the “Western” tourist trail. We haven’t been on that route for over 3 week now !

At around 4.30pm we arrive at the Sea Wind Hotel, none of the staff can speak more then 5 words of English. They ring their boss, Naveed, who I can communicate with. He is out on business but will be back in an hour. We want to pay with credit card as our Rupees are running very low again, but the comms systems are so poor in this back water that the card machines don’t work. With the help of one of the employees I hop on the back of his bike & head off to find an ATM in the nearby town, but of course it’s out of cash & doesn’t work…….yet again !

I do find some cold beer through ! “You bloody bewdy” so I spend the last of our Gandhi Rupees on Beer, Bed & Dinner. Who knows what tomorrow will bring !!!
It’s easier to just live in the here & now when you travel around Indian on the back of a bike.
25/11/16, Friday, Guhagar to Malvan , 220kms. First thing in the morning we both hopped on “Himo” & took off into Guhagar in search of an ATM but the 5 we found were all shut. So to cut our losses we checked out the beach & had breakfast at a food shack there, beach was good, food was average but cheap.

The beach was quite nice at Guhagar.

Once back at our Hotel we came across, 3 Mumbai bikers on a 4 day ride, they had arrived in the dark at 8pm, (See it’s not just the silly Aussies that ride Indian roads at night), they were all riding old, Indian built 2-Stroke Yamaha’s 350cc from the 80’s.

At Ratnagiri about 2 hours ride south (80kms?) we had some ATM joy & after lining up for 10 minutes I managed to uses 3 of our Credit Cards to extract 3 precious 2000 Rupee notes which is about $120AUD with a $3 access fee for all the cards combined. Then back into the hills & winding roads.

Next up was a Ferry crossing at Talwar, cost 180 Rupees. We had to wait for an hour ! The Ferry finally arrived, I’d started the Bullet in anticipation of embarking, then as we both waited on our bikes to ride aboard we were informed that there would be at least another 15 minute wait. It turned into 30 minutes, the Ferries are only smallish & take on about 5 cars, 1 Truck & 6 bikes.

When I went to kick start Jenny’s bike for our second attempt it wouldn’t go after about ten tries, “no pressure Willsie, but the Ferry is impatiently blowing it’s horn”.
I noticed the red isolator switch was in the off position…..Bloody Hell, I was just a little mad at myself for not checking. We left the mongrel thing idling for the whole 15 minute crossing, so getting off was reasonably fuss free.

Lots of hills, small villages, forest, some beaches & windy roads. Similar to the previous day except more coastal river bridge crossings.
Arrived into Malvan at sunset about 5.30pm, first Hotel which we had booked and we couldn’t locate it even with a part time “English” local Scott helping. The next 2 tries at accommodation options near the beach side wouldn’t give us a room even though they had them available (i.e. at first they indicated they had rooms then said no ? One hotel even showed up on Booking.com with vacancies?) reverse racism, don’t like people on motorbikes, we don’t wear wedding rings, we look a little battle hardened after 6 weeks of traveling India ? I don’t know but on attempt number 4 we used Booking.com before arriving there at 7pm.

Tomorrow we finally arrive into India’s tropical paradise of Goa, this will also most likely be our final full day of riding the back roads on our Indian Motorbike Adventure Tour. We plan on staying at Palolem Beach for a week, so there maybe a couple of small local sight seeing rides but the full on hard core motorcycle section of our Indian Trip will be over & the next chapter of preparing our home coming will begin.

Thanks for reading. Will