It was a rough night, after three tough, long days on the bike. Our neighbours at the hotel, were super noisy, with the TV blaring, and talking over the top of it. We woke in the morning feeling fatigued and not really wanting to ride, but also feeling like we had to get to Goa today. So down to breakfast, which was not bad, but no Big Aussie Bacon and Egg special. We checked out the beach area, bought some water and snacks to get us through without lunch, and loaded up.

Malvan was not the beautiful place we imagined, and we are ready to stop, but there is always some interesting sights.

Using Madam Google, we plotted a course of most easy, direct roads, which meant the SH66, a main road to Goa. Davo couldn’t get his head around that, and wanted us to continue on the coastal, scenic route, so we ignored him and hoped he would come good soon enough. He tried a few times to redirect us, and eventually threw a tantrum and switched himself off. Typical, little shit! We got a little confused and took a wrong turn, and then Davo got himself together, and found the route we wanted. From now, it is SH66 all the way. 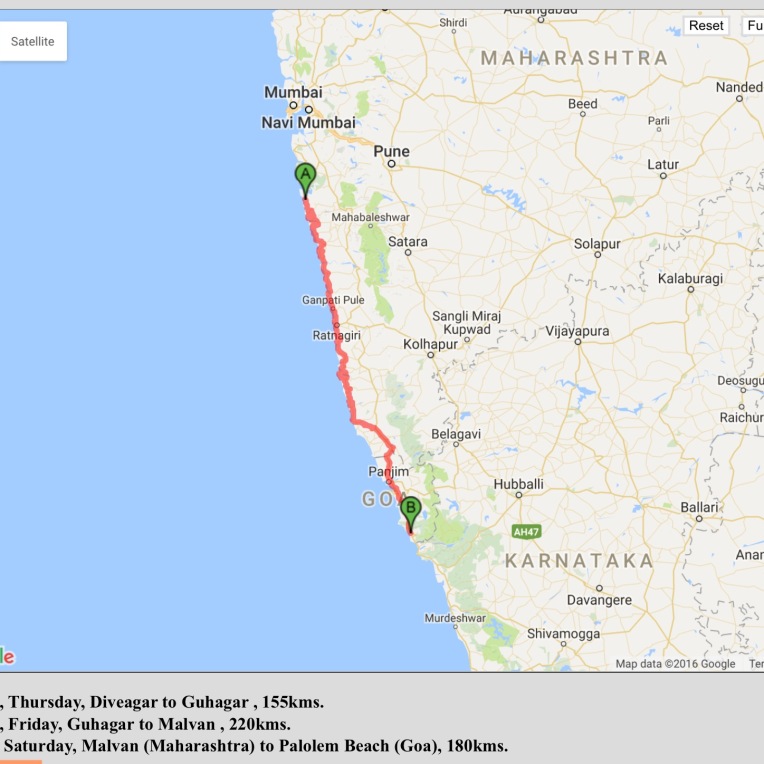 If someone tries to tell you that they drive on the same side of the road in India as Australia, it’s not true! They should, but they don’t!

It wasn’t long before we crossed into Goa, at a weird boarder crossing, and it may have just been our fatigue, but we believe the drivers became even more crazy. At one point, Will cracked the shits, and went full Indian, going off road on the left (we call that the kill zone, as driver vision is poor on that side) around a massive group of cars, that had just tried to die, overtaking us with bulk traffic coming at them. They came to a stop behind a couple of slow trucks trudging uphill, so we went bush. It is too hot to sit still in all our gear, we have to keep moving. 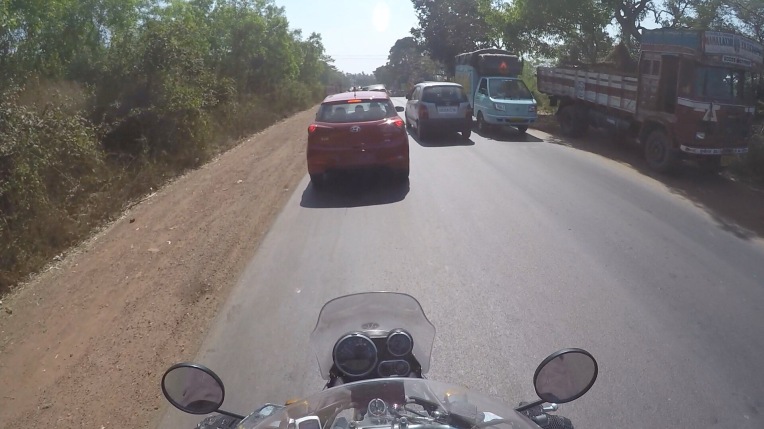 After 30yrs of Aussie driving, it is hard to comprehend the thought processes of Indian drivers. I am constantly asking Why? Why, why, why?

We were both getting a bit frustrated with the extra craziness, but I was starting to get angry. It was time for a pit stop. There hadn’t been any truck stops or places with toilets, so Will took a small side road, and we looked for a good place to have a wee and a drink. Just putting along, a couple of locals passed us, and we must of been so strange, they stopped just ahead of us when we stopped, and watched us. Will rode into a gravel pit area, and tried to get me to follow, but I was not in the mood for slippery gravel, so parked on the verge. I had to go pee, so with three strange men watching from the top of the rise, (they had hopped off their bikes and started wandering towards us) I walked into the gravel area, turned my back and did what I had to. I was not happy, and felt even more annoyed and angry, that they didn’t go when they saw what we were doing. Instead, they came and stood in front of my bike, watched me get on and try to move off – they didn’t move out of my way, just watched as I tried to take the bike in a tight circle around them, on a hill, and drop the bike as I couldn’t hold it on the angle of the road, with gravity against me. Fucking hell! You people! Haven’t you seen a glowing white arse before? Or maybe they were stunned by my Baboon Arse (bit of chafing from the Kevlar jeans and the three hard days)! Ugh, anyway, we lifted the bike, which now had stalled, and I rolled off down the hill and bump started it. Lucky she went straight away……who knows how I would have reacted.

Will watching me do yet another dumb manoeuvre, and we were shocked at these villagers digging the drains by hand. My right thigh wouldn’t fit in that skinny ditch. Hard, hard, hard.

Poor Willsie, he watches me fuck up, all the time, I swear he must just wake up and wonder what stupid shit I’ll do each day. No surprise he needs a calming beer at the end of our days. But he doesn’t yell at me, or tell me I’m an idiot, he just picks me up, hopes I’m not hurt, and let’s me rant on and on. He is a gem!

So the rest of the ride was just crazy drivers, highway, and one big city, Panjim. That was difficult, and we took the wrong exit around a round about, but there was a good loop to go around again to take the right one. We rolled into Palolem Beach, and as per our instructions, asked a couple of locals where the D’Costa Cottages were. Eventually, we found the right guy, who took us down a laneway, to the back of our cottages, and sorted us out. We are right on the beach, it is a nice beach, and the hut is super basic. They don’t have eftpos, nobody does hardly, so it’s cash, but there is no cash in town, we have to go to Choudi/Canacona 5kms away. Later, first we need to change, have a beer, and eat something. 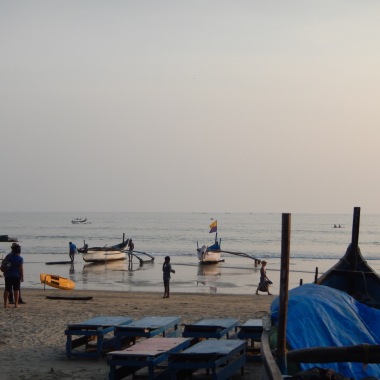 Palolem Beach does bring back memories of Bali when we went in the 80’s, but more simple again. Relaxing and cheap.

I can honestly tell you, the first night here, I was not happy. I imagined something a bit nicer, with hot water, sheets (there is only a light blanket to cover the mattress) and not so many people. But after a couple of chilled out days, better sleeps and fantastic food, oh and really lovely staff, it is pretty good. The cash hunt is on though, and it is not easy. With 1 cash point (ATM, Eftpos or bank) for every million people, it is a real problem. Imagine only 3 ATMS in the whole of Perth, and no shops or businesses have Eft or know about bank transfers? This is the reality here in India right now. But, they are trying hard to work through it, and to be patient and accommodating. So we are too, and we are racking up a bloody man sized tab….. 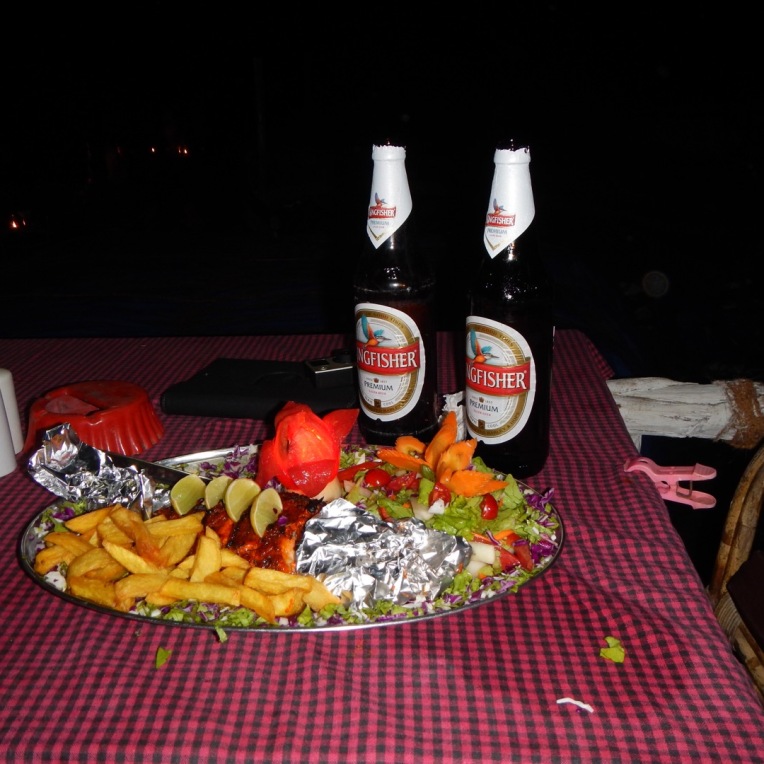