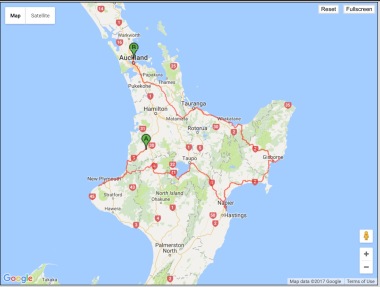 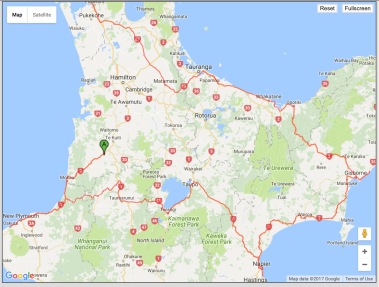 So far Jenny & I are having an amazing time touring New Zealand’s North Island. Traveling at the end of Autumn has it’s downsides, like low temperatures & rain but the silver lining is the lack of Tourists. Which means there is abundant accommodation options & you don’t have to battle with crowds when viewing the sights.

Last year the statistics show New Zealand had nearly 4 million visitors & struggled to cope. The majority of the visitors come during Spring & Summer. During the same time period Australia only had 8 million visitors….

On Sunday, May the 14th we left the quirky campground at Motuoapa situated on Lake Taupo & headed for Hastings/Napier on the East Coast of the North Island.
It was an absolute glorious day, the temperature during the night had plummeted to just above 0C, we were reasonably cosy in the Spaceship van. Lake Taupo is the remnants of an ancient volcano that last erupted 26500 years ago leaving a vast caldera from its super eruption. It covers 616 km2 & is up to 186mtrs deep.

Seeing Lake Taupo on such a clear day was great, in the distance we could also see steam rising from thermal vents that surround the lake.

We have a critical choice to make on which direction to travel, a few days earlier we tried to extend the time we could have the Van, but unfortunately it wasn’t possible because KEZ-Bro is up for its Certificate of Safety renewal & must be returned to Auckland on the 17th. So our choice is to head for Napier, famous for its Art Deco Buildings or drive south of Lake Taupo down too the two huge Volcanoes in Tonariro National Park, Ngauruhoe & Ruapehu . We can’t do both ! For better of worse we choose the Napier option.

This time we avoided the backroads & took the main highway, number 5. Even though it was direct there was still heaps of winding roads, coming off the top of the range down to the coast was quite stunning.

Our first long stop was slightly out of the way at Hastings, where we caught up with a friend Dale, she had once worked for us as a Cook at the Roadhouse back in WA, but after 20+ years in Aus. has now permanently relocated to NZ (she is a Kiwi). We had a long lunch and spent nearly 2 hours swapping stories from the past 2.5 years since we had last all seen each other. Next up we headed for Napier only about 20kms north of Hastings. Once there we decided to spend the night at the Napier YHA located right on the beach, very close to town. We wondered around town, had a beer at an Irish Themed Pub, then dinner at a Thai Restaurant, nice enough but not even slightly spicy.

Just a couple of the many murals that are around Napier. 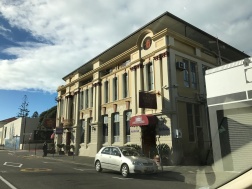 Some of the Art Deco buildings in Napier. In 1932 a 7.8 Earthquake destroyed the town. Fires finished off the rest. The town was rebuilt in the Art Deco Style, that was popular at that time in history.

Monday the 15th was mission “Footrot Flats”, Jenny & I drove a few hours up the coast to Gisborne. Footrot Flats is a cartoon strip featuring Wal & Dog, it was created by Murray Ball & ran in papers throughout the world from 1975 to 1994. There was also a film & song that both did pretty well in the late 80’s. Sadly Murray Ball died earlier this year at the age of 78, he spent his whole life in the town.
The town of Gisborne have commissioned a bronze statue of Wal & Dog. We looked around town for it but soon discovered it was packed away and will be installed out the front of the new library which is due for completion later this year.

That afternoon we headed 17kms North up the coast to Pouawa, which is on a Marine Reserve. That night we free camped & had the place to ourselves. It was cold but the rain held off, the crashing waves lulled us to sleep early.

16/05/17 Tuesday, Jen & I headed back to Jenny’s Uncle Dave & Anne’s place in Welcome Bay, Tauranga. The drive up there was spectacular as a large portion was along Hwy 2, following the Waioeka River through a reserve that was still vegetated with natural flora. Just Beautiful !

While traveling back to Tauranga, we stop at a rest/camp stop on the Waioeka River.

We had yet another great evening with Dave & Anne. This is turning into one fabulous side trip, so glad we came, still have another 12 days to amuse ourselves, should be pretty easy in EnZed.