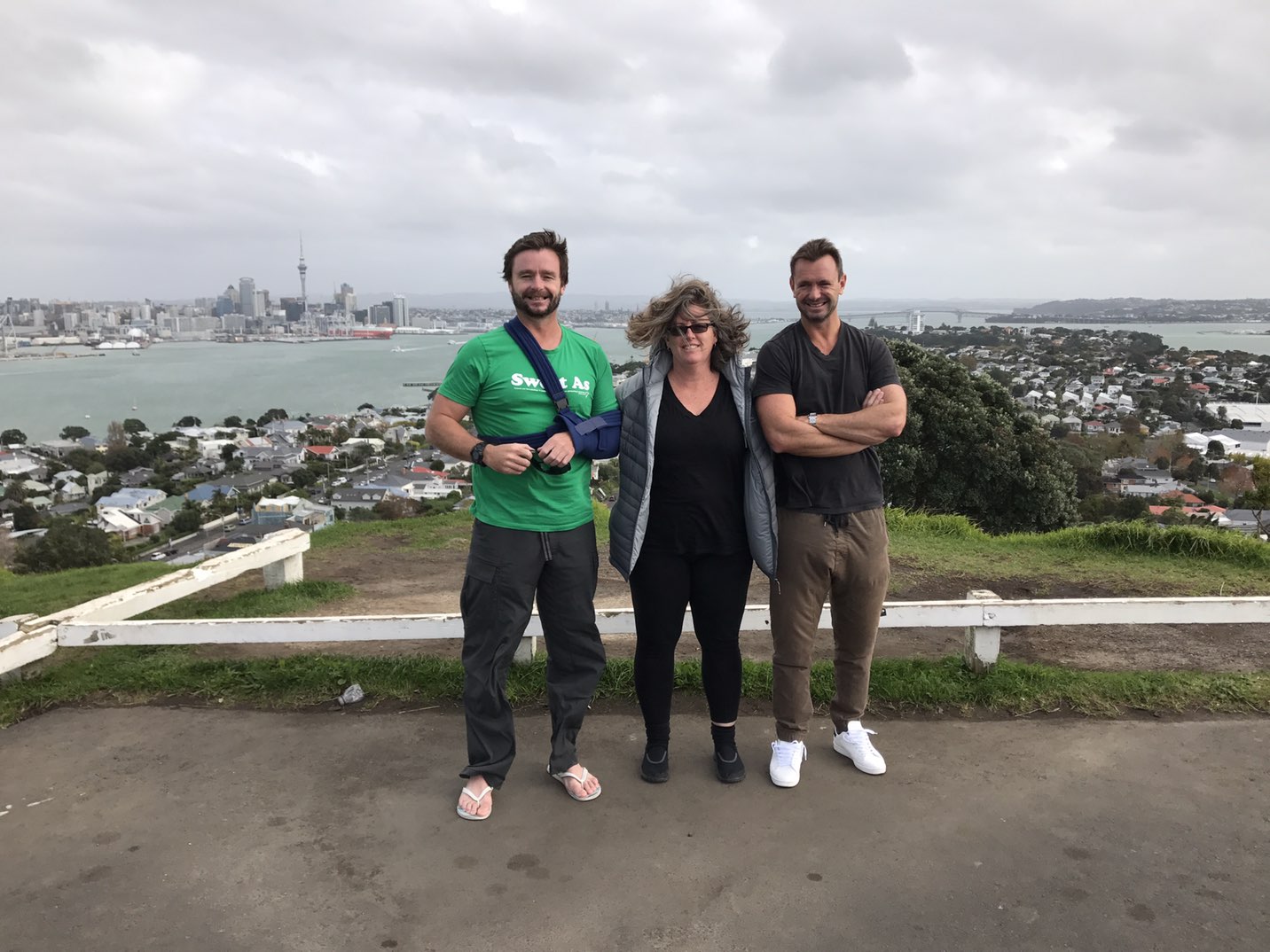 Not too rushed to get up again, the weather is turning quickly. Winter is coming for sure. Ann was up in the dark and off to Boot camp, then home for breakfast before she heads to work, 5 minutes on her 125 scooter. We did actually get up and see her off. After a team effort making our own brekkie, Dave, Will and I had a bit of a mission, before heading up to Auckland for the return of KezBro. As we were going to borrow the Red Van of Courage (Postman Pat van), we needed to deliver some of the contents to Ann’s brother, Mark, in nearby Bethlehem. So Dave is in the Red Van of Courage, I’m in KezBro, and so Dave can get home ( we need to drive both vans to Auckland) Will rides Dave’s 150 beast of scooter. Dave leads, followed by Will and then me. Luckily, the rain held off, and we arrived at Marks’ dry and safe. Will was happy to have got on some sort of two wheeled beast, even if it was a bit smaller than he is used to. 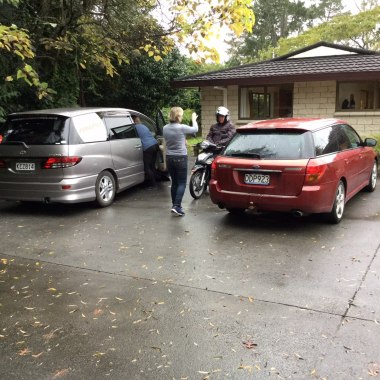 Will loved his little scooter ride, but glad it didn’t really rain.

A nice chat and a coffee with Mark and his wife, who are truck drivers, and have ridden bikes too (in a past life), and then Will (Red Van of Courage) and I (KezBro), took the most direct route to Auckland to return KezBro. I had to lead, as I had the GPS, who immediately gave me shitty directions, and instead of trusting my own navigation skills, I followed it, making us do an extra 17kms for absolutely no reason….gggrrrrrr……bloody hell D2? As we drove over the Kaimai Range, the rain just came down, not to mention the clouds were right on us. Slow and steady, and I bet Will wished he didn’t bother cleaning ol’ KezBro. 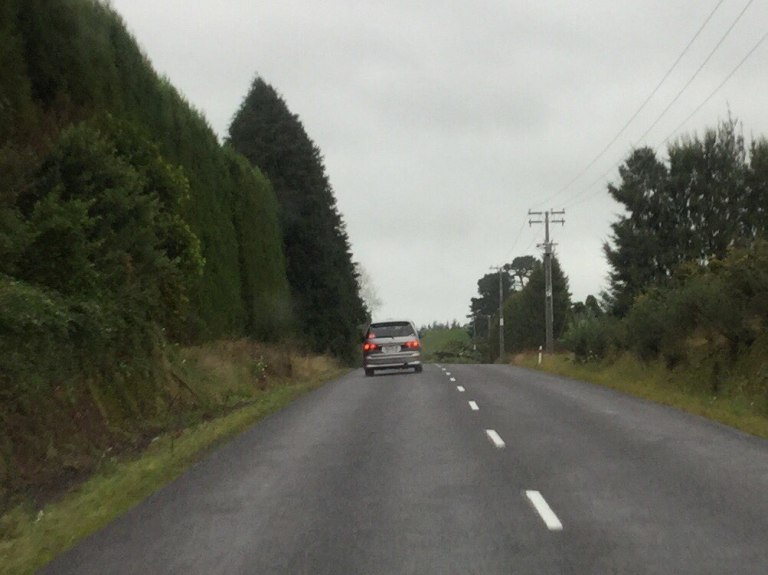 Good old KezBro had no probs up and over the hills.

Can’t say it was a great drive, as there was no time for sight seeing, just road watching, and making sure Will didn’t fall too far behind in RVoC. The old Diesel engine struggled up the hills. As we got closer to Auckland, we got ourselves on the number 1 highway, and the traffic started to get serious. The pressure was on, and there was no chance for a break, so we just pushed on and somehow, made it back to ground zero, and landed ol’ KezBro safely at Spaceship central. Phew! Luckily, Will was right behind me, and after a very quick check in, we were heading off to try and find cousin Simon. This miraculously, was pretty easy, mainly because I was no longer driving, we were now in the RVoC, D2 was back on track, and the traffic was busy. All our Kiwi family say that it is getting ridiculous. We were stop start, and it wasn’t even close to peak hour. 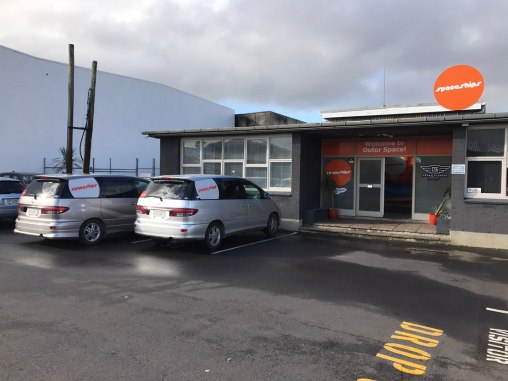 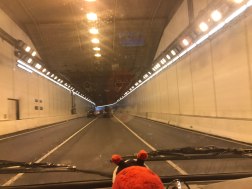 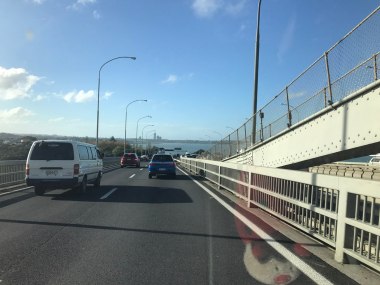 It’s never much fun driving through a city, but Auckland is 70 thousand people ahead of it’s expected growth, already this year.

We found Simon, who is resting up at home after a pretty serious shoulder surgery, and he welcomed us with one open arm. We had a great time finding out about his life, and his many adventures. Seems this travel bug is in our genetics. His wife, Kelleigh, came home from work, and we all went to a local bar for dinner.

The weather has gone right off! 40km/hr winds, gusting to 70, and the rain was pretty constant. Simon can’t do much, with his arm in a sling, and I can’t do much in this shit. So we all just hung out, and binged on Fast and Loud on Sky TV. Lazy, lazy, lazy, but who cares, it was great chatting to Simon, and finding out more about him. Poor Kelleigh, comes home from work, and we are all just laid out on the couches watching telly. It was great staying with them, and they are super welcoming. 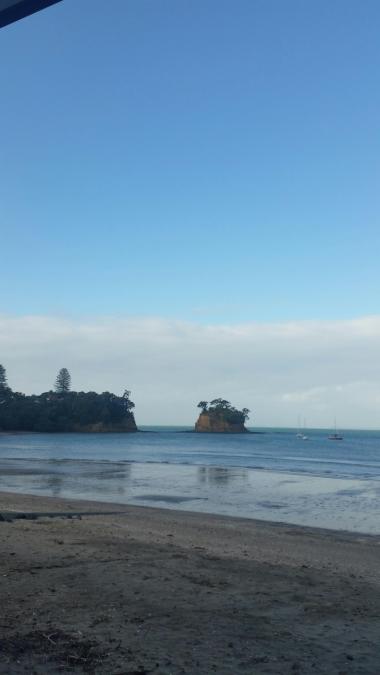 Just loved the Bay, and this cool tree. I call it the Orangutan tree…..obviously!

The cousin hunt continues, with Simon’s brother Jethro, who also lives in Auckland. So Simon lead the way, and we followed, in good old RVoC, and met up at Jethro’s place, where we met him and his wife Leo. They work from home, in their own business, and again the scruffy Aussies were welcomed in without question. They don’t really know if I’m a cousin, they just believe us…….bit too cruisie hey? So we got a tour of the area, and taken up to Mount Victoria, which has a fantastic 360 degree view of this crazy, spread out city. The wind was blowing a gale, trying to blow us off, so we went down to the village centre, and had a nice lunch at a real pub. 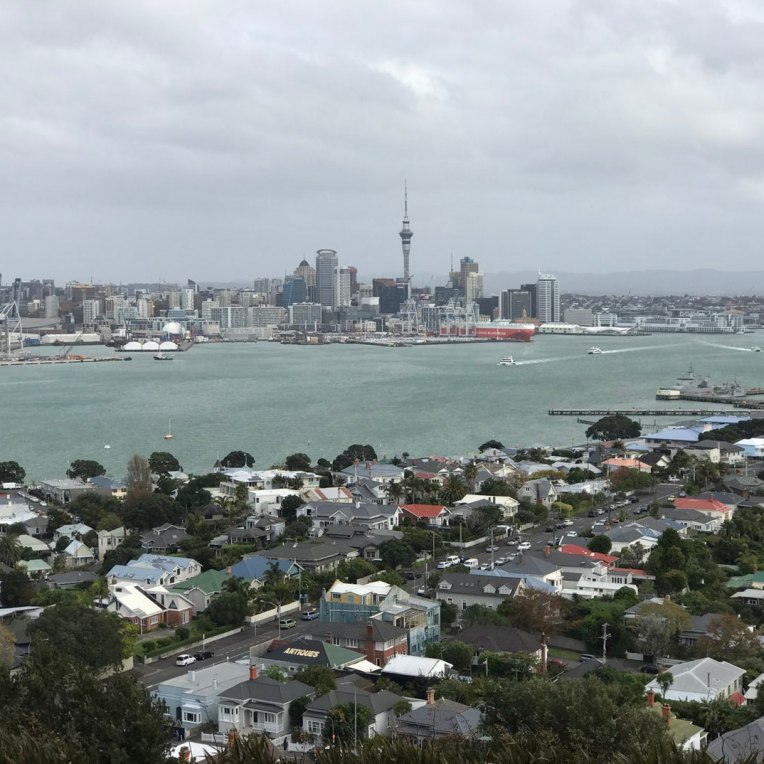 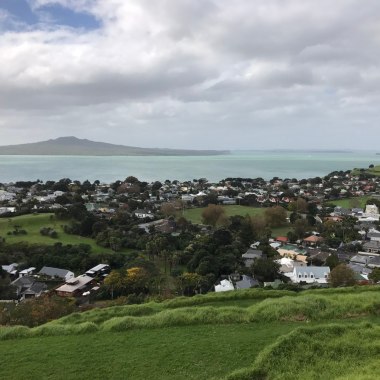 What an amazing view! Also, there are tunnels all through this mount, and spots where guns were once mounted.

Nice little main street, with lots of cafes and shops, and one real pub…ah!

A pretty quiet night with Jethro and the family, more chatting and finding out about, yet another family of amazing people, who have done some amazing things. Wow, all this getting to know the cousins is actually quite exhausting, and even heavy on the emotions. I’m so glad that we are here doing this. You cannot put a value on family, and we shouldn’t restrict ourselves to the ones that are nearby. Technology is great for maintaining these friendships and beginnings of relationships, so there really are no excuses to keep communicating.

As is common with families with young kids, Saturday is kids sports, and we were left to our own devices this morning. So we decided to take a ferry across to the city and take a look around. It was easy to find, easy to park, and easy to get on. So across the harbour we go, so far no rain, but the wind was up and blowing. 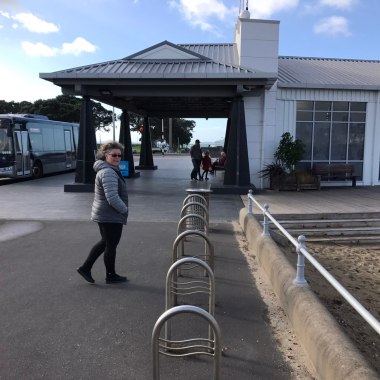 Not the best day on the harbour, but by far the worst. A quick way into the city.

Basically, we wandered down Queen street, checked out Sky Tower, and decided to go see Guardians of The Galaxy, to rest my stupid dick leg. The city looks pretty nice, with an interesting mix of older and new buildings, lots of the usual retail shops, plenty of touristy shops, and lots of little side allies with interesting eateries and bars. It wasn’t super busy, and the rain held off until we were inside the Sky Tower. We got up to the Sky Deck, at 220mtrs high, and I was starting to get a bit freaked out with the swaying. Almost feeling sea sick, so we went down 10 floors, to the cafe, at 182 meters. The light fittings were moving ever so slightly, but I could deal with that better. We watched the rain come in, and move off, and then headed off to find the cinema.

A bit quiet in town on the weekend, but suits us. Going up that big tall building will be a bit scary, I don’t like heights, but give it a crack. 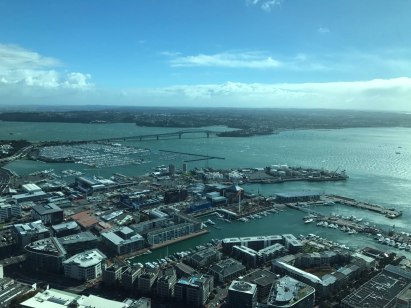 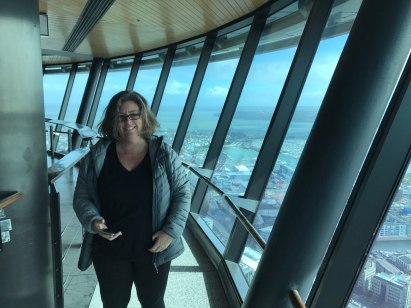 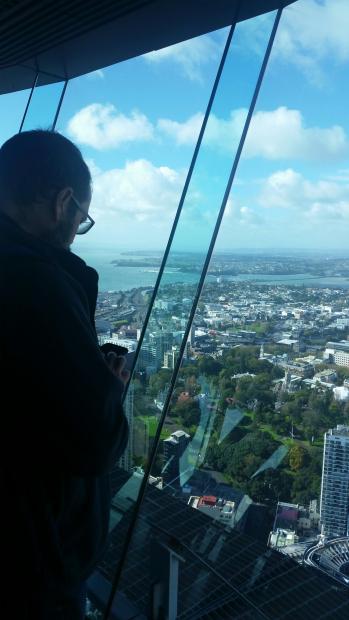 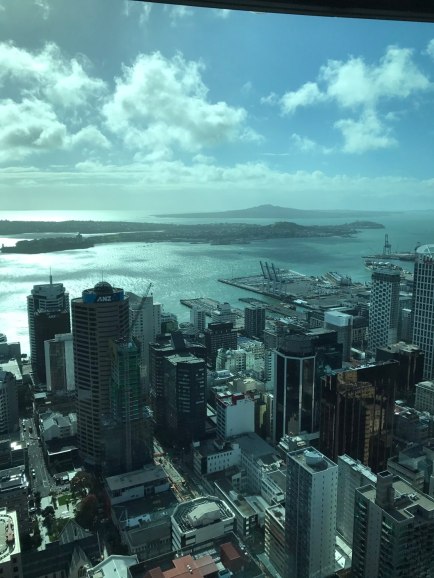 We got a good idea of how spread out this city is, with houses as far as we could see. I did stand on those glass panels too…..very nervously.

The movie was pretty good, and by the time I’d walked back to the ferry, my leg was at about an 8, on the pain scale. Ugh, stupid bloody thing. But that is the furthest I’ve walked in a while, and it should be good for it. We’ve picked up some drinks, and are now just hanging out in Jethro’s house by ourselves. Tomorrow we head back to Hamilton to, yet another cousin, Adrian’s house. He is helping us with the motorbike hire. Looking forward to that. 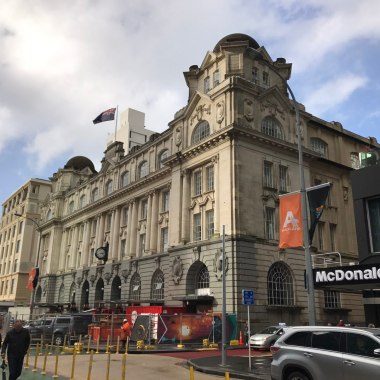 Some interesting old buildings down town. Nice to see them cared for and respected.