It was slim pickings for breakfast this morning, as we only really had enough cereal for one person (meant to be in Roma). So we had a very small bowl each, a nice coffee, and took our time packing and picking the bloody prickles out of our shoes. We don’t want to spread these little bastards any further. Sketchers are very good shoes, until you have to try get the thousand tiny prickles out from the great tread.

Some of the oldies had mentioned a pretty new and interesting ANZAC Memorial Museum, so we decided to wait around for opening at 10am, and take a look. So we had time for a nice warm shower, across the road, and to sit and enjoy the beautiful morning. When it opened, it was $5 each, and well worth it. They had a complete Canberra Bomber airplane inside, which came before the building they constructed around it. There were lots of vehicles, and bits and pieces, but the one display I found affected me most, was one about the Light Horseman. There was a song called “It’s As If They Know”, by Eric Bogle, and it describes how the soldiers were not allowed to take their horses home, and as they had taken care of each other, they were best mates, and they couldn’t bear the thought of leaving them to be slaves or massacred by the opposition, so they each took another’s horse and shot it. That would have been such a tough thing to do after all they’d been through. A very emotional song.

The town pub, where we had an awesome pizza, and the farmer and his dog. 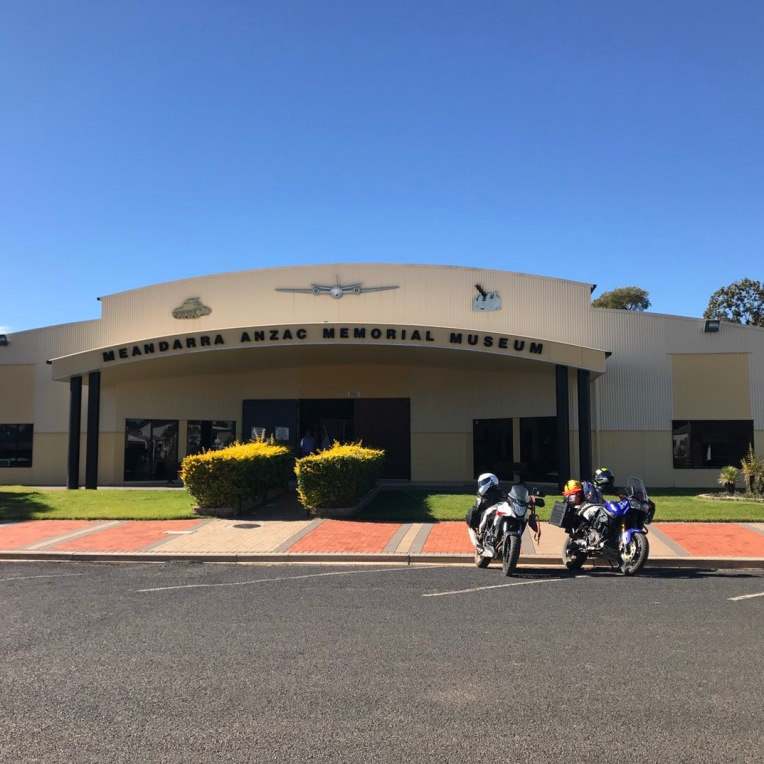 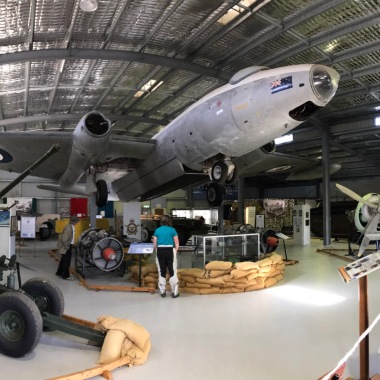 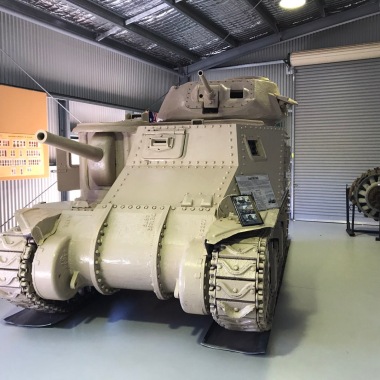 After that, it really was a very easy and pleasant ride over the rolling hills and around the vast expanses of station land, into the Shire of Maranoa, and through to Surat. A very neat and tidy little town, where we found a nice park on a river, with a table and bench for us to have lunch. So we relaxed in the park, and enjoyed watching the little Happy Jacks (fun little birds who like to play in the sand and chat in small groups).

This area is big for Chick Peas apparently, but had a nice feel to it.

There was no rush today, as we only wanted to get to Roma, so we cruised off after lunch, and before we knew it, we had made it to The Big Rig, just coming into town. The Big Rig is a museum, of sorts, giving you information about the discovery of gas in Australia, with a cool light show and lots of old relics. I know this because we’ve been here before. About 16yrs ago, when we took our kids on a trip around Oz for 6mths. The kids loved the light show. We didn’t mind it either. After a quick ride through town, and a refuel, we decided to stay at the same place as we did in 2001, next to The Big Rig. Man has it become run down. We remembered it being green and lush, but now most of the grass has gone, as it is really set up for caravans and motor homes. Times have changed. They parked us in the back corner, amongst the permanent residents, on a small patch of dying grass (thank you, better than dirt), on the edge of the busy road into town. Bugger, hope the trucks don’t go all night. 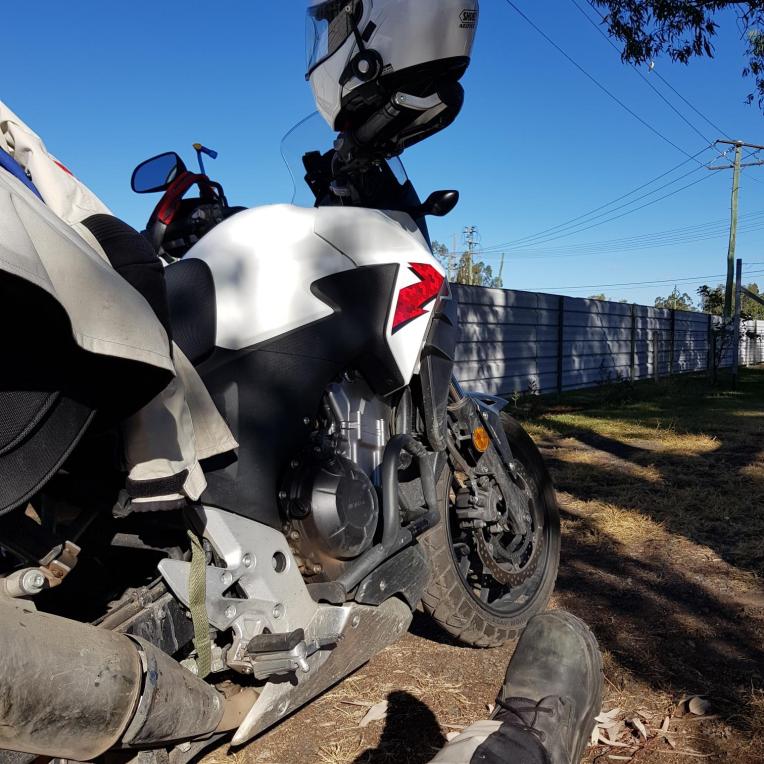 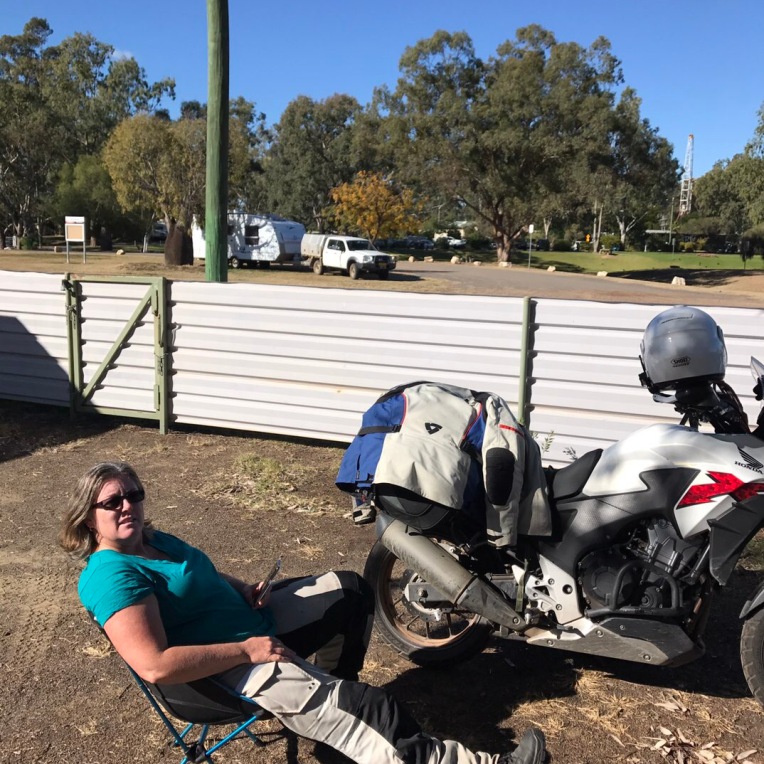 A bit of shopping, back to relax, cook some dinner on their barbecue, and use their pathetic wifi (100Mb free is all you get, and I’m sure it’s dialup, it’s so slow) to blog. What is with this system of “Free Wifi”, that is actually useless. If you want better, you have to pay stupid prices, like $40 for 1Gb. Come on Australia, we pay $30 for a tiny tent, a hot shower, some gas to cook, and you can’t give us some decent internet? Come On! 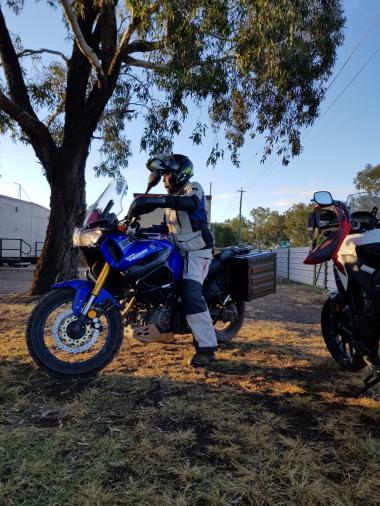 WIll’s done the shopping so we can eat and drink and be merry.

After my concerns about road noise, it wasn’t too bad. It did get a bit colder than expected, with the temp at just over 4C at 7am. Bbbrrrrr! But, no worries, the sun was up and things were warming up fast. We emerged from the tent at 8am, and it was over 10C, just, and got to sorting our gear. It was time to clean out and send home excess stuff. We managed to gather 7kgs of unnecessary items. Bloody hell. Mostly clothes, cold weather stuff, and a few electronics. So after our nuts and berries, Will rode to the Post Office to do the biz, while I packed the tent and other stuff. He returned, we packed our bikes, and felt a bit hot for the first time in ages. I was actually sweating, great! Today, we also removed our wet weather liners. Risky, but it’s warm enough. 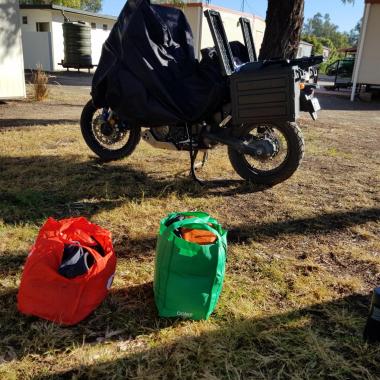 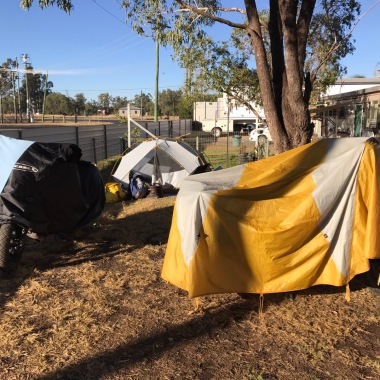 Got our excess gear together, and drying out our dewy tent before the pack up.

A bit of a simple, easy ride again today, as we are heading to Carnarvon National Park, which we visited on the big trip with the kids too. We loved it then, and wanted to see how much it had changed, and check out the trees the kids planted when we were here. So we rode to Injune, making as many stupid jokes and puns as you could imagine……it is June you know? It was a magnificent day, clear skies, little wind, and the temp was getting up there, like 24C. Nice, nice, nice!

From Injune, the ride became better and better. We were actually getting back into The Great Dividing Range again, with a sign telling us we were at 446mtrs. More bush, larger rocky outcrops, and bigger hills to ride up and over. The Queensland roads are pretty bad folks, rough and narrow, and you do have to pay attention, but the scenery is very distracting. Quite a lot of trucks on this route too, so stay alert. Not to mention the millions of warnings about Roos, which we saw and smelt the decaying carcasses of. But the scenery, is just great.

The turnoff to Carnarvon Gorge, came up quick, and we scooted off down it. We don’t remember quite so much farming on the road in, but it was a long time ago. It is pretty flat at first, as we ride through someone’s station, with free roaming cattle, which was a bit spooked by us, and slowed us down a bit. Very soon, as we got closer to the awesome ranges, we started to rise up and wind our way through to the camping areas. This road was dirt last visit, but was newly sealed. So new, it was finished today. Thank you! But, it does mean that more people can get here, which means it’s probably not the gorgeous, peaceful place it was, either. 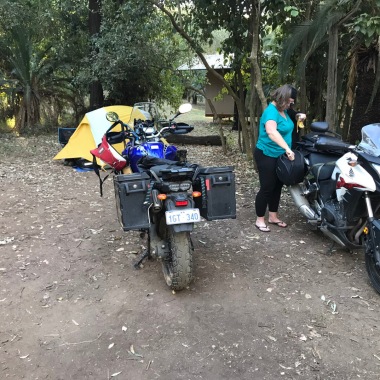 No grass, they’ve had a super dry wet season. But we are in a quiet spot.

Correct! Busy as hell, and we are lucky to get a tent sight for two nights. It is about 5 times as big now, and there are 3 separate camping/resorts here now. It is SO different, we can’t help but be a little disappointed, even though we know 16 years is a long time, and change is inevitable. We are super lucky to have seen this place as it started. Now they have a mobile bar for Happy Hour each day, and free movie nights, lots of talks and tours, and “Free Wifi” (and yes it’s unusable). Not to mention the camp kitchens, modern amenities, and best of all, a camp fire. Which we have spent the evening around, chatting with some of the Grey Nomads, who tell us interesting tales, and about new places to visit. Oh, and every now and then we glance upward to take in the bazillion stars we can see out here. Never gets boring.

Tomorrow we’ll see some sights, try again to see a platypus, and just enjoy the amazing birds. It’s still a beautiful area, even with 600 people visiting at the same time.