It’s not the lovely quiet start to the day we’d hoped for, as people get up early and pack up ready for their 800km drive home, but after 10am, the place is finally peaceful. Just a few people having a rest day, and the Happy Jacks chatting and playing around us. If they haven’t left, they’ve gone to the gorge on one of the many beautiful walks. We decided we’d just veg out here, and walk around the Carnarvon creek, trying to spot the elusive Platypus.

It was a magnificent day, weather wise. 24C, sunshine and no wind. Super! So, we relaxed just observing our surroundings, as there really is no Wifi, and absolutely no phone reception. No blogging, but tap out some notes. We had to charge our devices on good old Little Bubby, which worked better than the camp kitchen sockets. Around lunch time, we wandered down to Platypus Pool, and sat quietly waiting. A miracle happened, and we spotted some tell tale ripples, moving along the bank. The little blighter was trying not to be noticed, but finally had to duck across the pond to scoot under a big log. Spotted ya! Huh, so cool. Just a quick glimpse, too quick for the camera, but we saw ya. 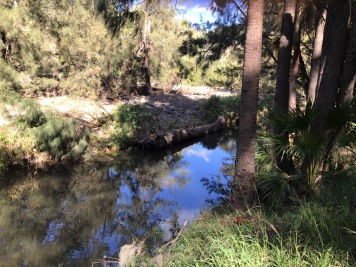 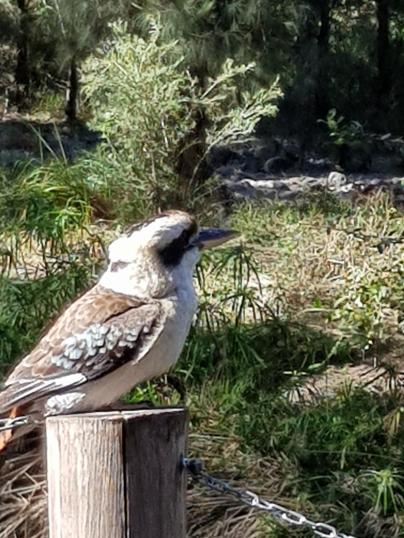 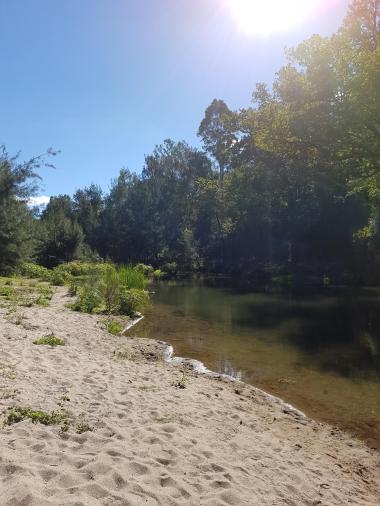 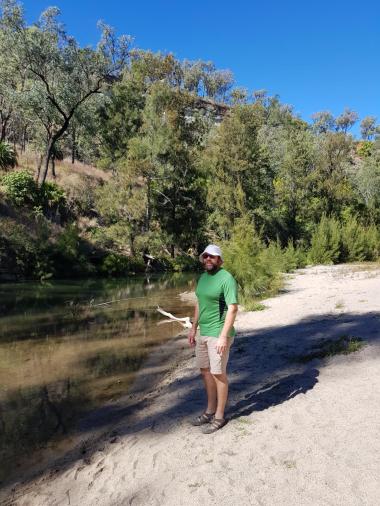 The Kookaburras here are not frightened by us, and also such posers. It’s a really nice spot.

After a nice stroll around the site, we chilled out some more at our tent. Will was reading, and my stupid knees were hurting, so I stretched out in the tent to try and ease the pain. Next minute, I’ve had a nap! Whoah, what happened there? Funnily enough, Will had slipped off to noddy land too, while relaxing in his little chair. Lazy buggers. But hey, that’s what you do out here. So it was another Happy Hour, another viewing of the Platypus (which was even better than the first one), and an enjoyable dinner chatting to fellow campers. One lady in particular, Denise, was really lovely. Such an interesting lady. Her sister in-law Denzel, and her husband started this place, and then sold it to the people who have expanded it so much. So both Denise and Denzel were here to cook for a group of training Geologists, who were on their way. They come to study the cliff rocks, which are of the same type they drill in under the water. She was such a lovely lady, we almost stayed another day to help them prep. We enjoyed another great night around the fire pits, drinking and chatting and getting all smokey. 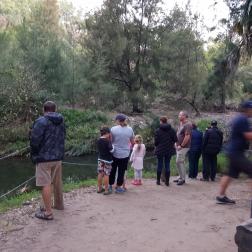 A group of students from Rockhampton were out on camp, and we enjoyed the games around the fire. Glad those teenagers weren’t mine to look after.

Plan A: Get up early, pack up early and ride a few kays to do one of the short walks before heading off, north, to Emerald. What actually happened? It started off very promising, with us getting up and semi packed by 7:30am. Off for breakfast and hot drinks, finish packing, go say see ya to some really nice Brisbane-ites we’d met last night, and check out their T-Van camper trailer (on my list for future travel options), then mount up and ……..hhhmmm…… something seems to be a bit off for Will. ” I think I’m stuck in a hole or something.” He says. I had a look, and suggested that his back tyre looks a bit flat. ” Really?” “Yeah!” “Bugger!” Yep, bugger is right. Off we hop, and Will takes a closer look, and finds the rotten little culprit. A tiny nail, in the tread groove, far enough in to let the air seep out. Poop!

Connie and Luke, and Gavin and Sarah, and kids. Great time chatting and drinking port guys, thank you for sharing… stories and port.

Plan B: Unload Will’s bike, quickly plug the hole, pump up the tyre, repack and carry on with the rest of plan A. What actually happened? The plugging of the hole took longer than the allotted 15 minutes, as the glue was off, and the plugger was a bit big for the tiny hole, so after much fiddling, lots of grunting and cursing, and some assistance (the offer of some unopened new glue/lubricant) from our neighbour, it was plugged! Phew, now the easy bit, pumping it back up. Will has a nifty little motorbike air compressor for the job. Being a bit flustered and annoyed, Will plugged it into the socket the GPS usually uses, and promptly blew the fuse! Aaaaahhhhh, fuck! (This time it’s Will swearing, not me). But realising that socket didn’t have the amps to handle the compressor, he plugged into a SAE connector that comes directly off the battery, and away it went. It had no problems getting his tyre to the required 42psi.

Ggrrrrrrr……. such a tiny thing can cause such bother.

Plan C: Repack the bike, and just bugger off towards Emerald. And that is what we did. It was now about 10:30am, and Will had lost his will to walk, and a bit of his riding mojo. Never mind, at least it is a gorgeous day. The ride back out to the Carnarvon highway was bloody lovely, and a bit reminiscent of our Indian adventure. Herds of young steers lazing and wandering all over the roads. The major difference here, though, is these guys were spooked by us, and one large group thought we were mustering them, and started running along in front of us. We couldn’t get through, around or past, it was quite funny really. Then a caravan came towards us, which made the group separate. They are pretty funny, and quite cute. 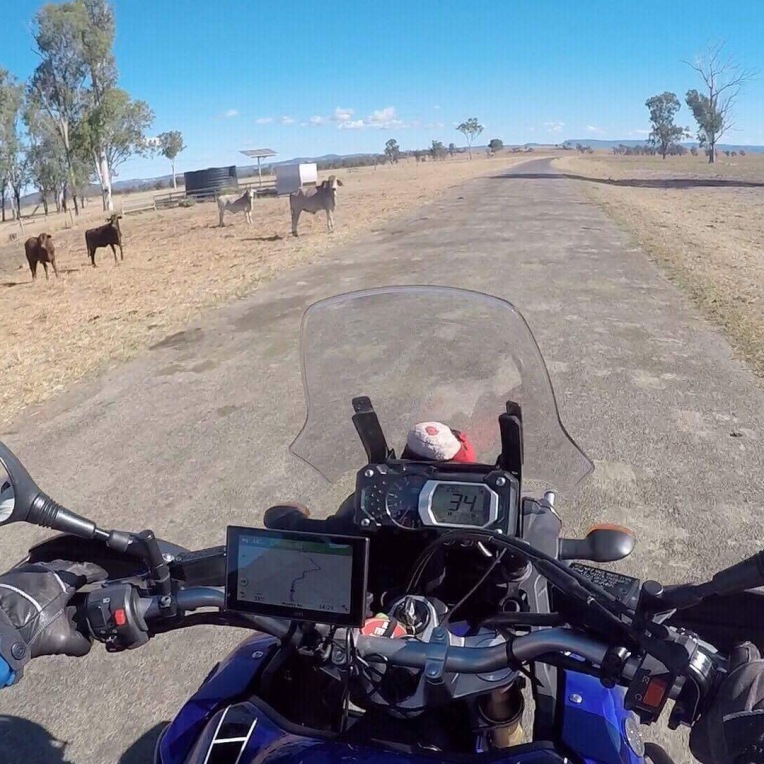 Fun with young cows, and this wreckage is from a plane crash way back in 1943. It was caused by an electrical storm, and unfortunately killed 4 US crew and 14 Aussie soldiers.

A further 80kms on, we came to Rolleston, and found the local park, grass, shade, toilets and a community coffee van selling good coffee and delicious cake. Nice one Rolleston. We had a very relaxing lunch, of left over sausages (from our Takarakka barbie pack) and cheese in wraps. The coffee was great too, and the small slice of carrot cake was awesome. More chatting to other travellers, who stopped to ask us directions, to the grocery store, to Emerald, guys we’re not locals, can’t you tell? 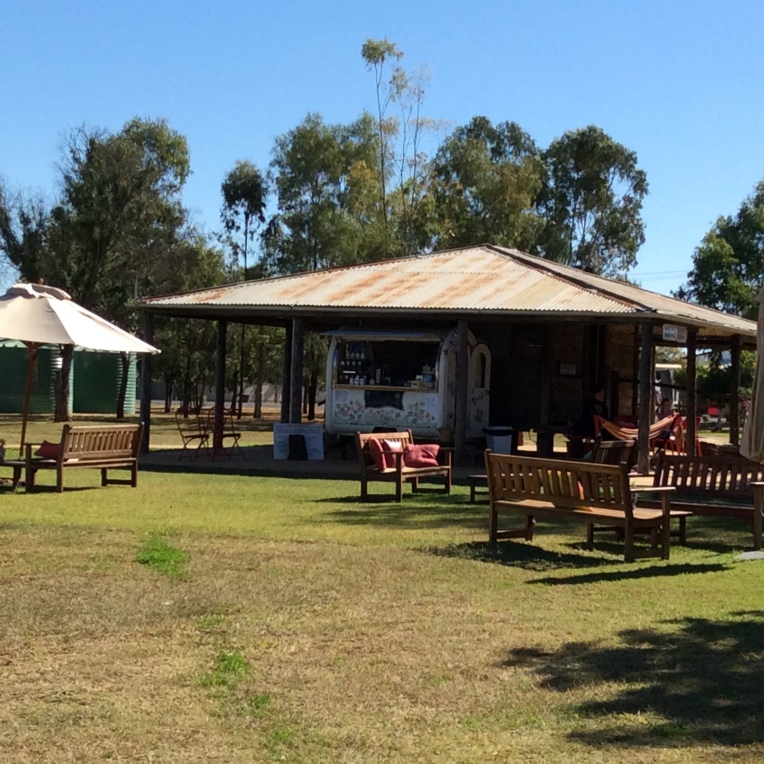 What a nice spot for a break….and a bit of man spreading. Onya Will.

Next little town was Springsure, which was about 3 times the size of Rolleston (so 750 residents?) and was neat, tidy and had some beautiful hills and rocky outcrops on the way out. We were heading through the Staircase Ranges, where Denise had said the Geologists would be, and it was really pretty. Nice riding, great views, and not too much traffic. It wasn’t long before we spotted the group, up on a ridge, all with their hi-vis gear on. We tooted like crazies, waving madly, then pulled up down the road where their bus was waiting for them. We had a quick chat to the bus driver, just to let Denise know we stopped, tooted and waved, then carried on towards Emerald. 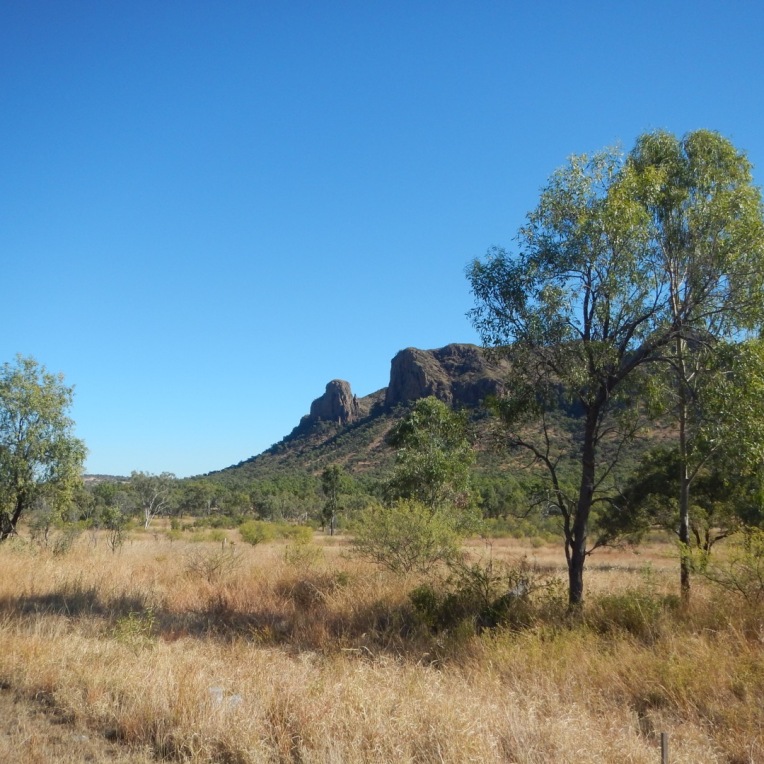 The views were a bit better on the other side, but the sun is in the wrong spot. 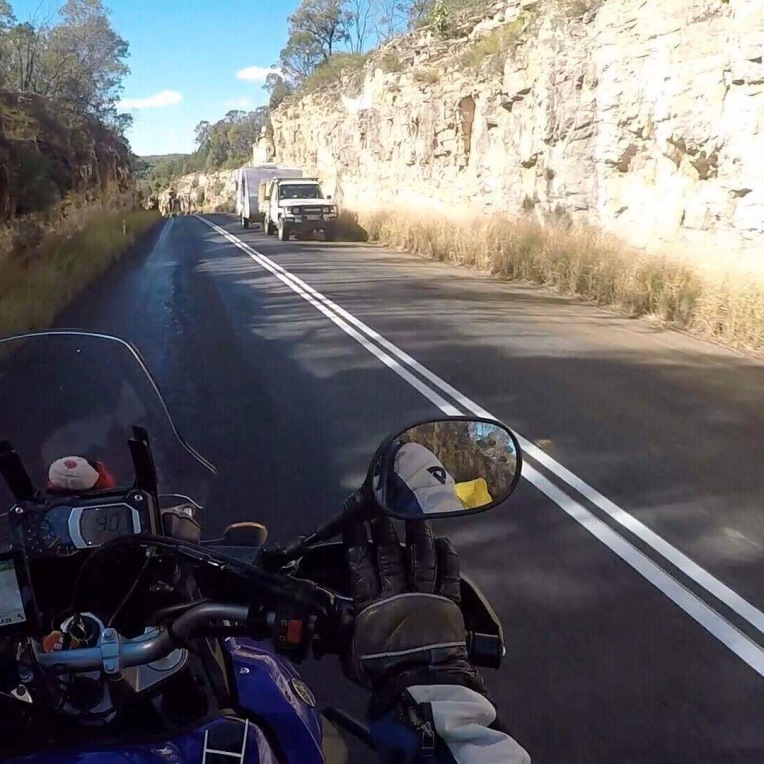 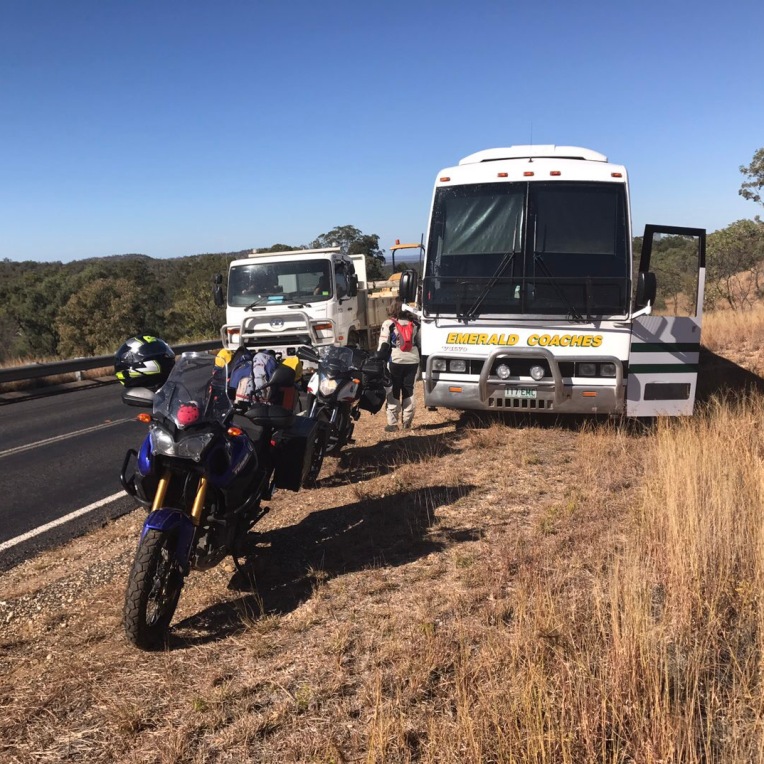 Look out for the big rigs, and we’ve found the Golliwogs….Geo’s… you know what I mean.

Back at Springsure, we’d discussed our fuel situation, and both decided we had enough to get the 69kms to Emerald. About 25kms from our destination, my fuel light was flashing, telling me things were getting tight, and so was Will’s. Hooley Dooley, what have we done? Fingers crossed and pleading with the bikes to get there, we went straight to the first fuel station we saw and filled up. Will had 3 litres left (about 50 more kays) and I had 2 litres to go. Too close people, just remember, a quarter is empty! But we made it, and decided to stay here in Emerald for two nights, in a cabin, and clean everything. Both of us are down to our very last clean outfit. Camping is dirty business. 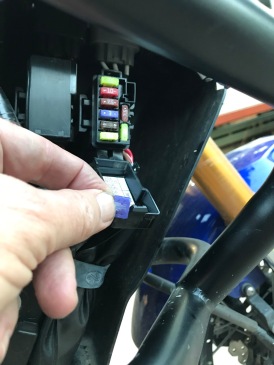 Saved by a service station, where we got fuel, and some fuses so Will’s bike is back to normal.