Cover photo: View across the coastal plains from Oakley Dam.

Six weeks of Winter. Currently we are in Mandurah, Western Australia at our Travel Home Base. Great to see the family but we find ourselves yearning for the wide open road, leisurely cruising along on our ADV Bikes under the BIG Blue Sky of Australia’s tropical north during the Dry Season. Right now Jenny has a shocking head cold, I’m lacking motivation & things are not going quite to plan.

After our 4 weeks in NZ, both Jenny & I had tentatively planned to fly home from Cairns in late July. It was either that or ride the Bikes back to WA quickly.
We have some business to sort out like 16/17 financial year’s Tax, our Self Managed Superannuation Fund has purchased a Factory Unit & we need to finalise the sale. There are a few other things but those two are the biggies !

Another reason for the “quick” trip home is to help Jenny’s, Mum Lorraine celebrate her birthday, it is a milestone one that ends in zero. Sadly the day before Jen was due to fly out of Cairns we received the awful call from her brother, John that their Dad, Joe (Loved stepfather of 38 years) had passed away. Joe had been suffering from the horrible disease of Dementia for a number of years & Lorraine had done a stoic job as his carer.

The next day, Thursday the 20th at 4pm we both mount up on the trusty Super Tenere & with Jenny’s small backpack shoved in the right side pannier ride the 60kms south along the Captain Cook Highway, which hugs the Coral Sea & usually takes about one hour to drive in a car from Port Douglas to Cairns. It is a twisty dangerous road with lots of tourist traffic, on the Motorbike we manage to shave about 10 minutes off the typical travel time. At the Airport we hug it out, share a couple of kisses, say a quick awkward goodbye & go our separate ways after spending the past 110 days in each other’s company travelling together 24/7, I really love this woman !

Riding Two-Up from Port Douglas we ride down to Cairns Airport where Jenny has a flight to catch back to Perth, WA.

The solo ride back “home” to Geoff & Taryn’s place is even quicker & I arrive in Port Douglas just as the sun is setting on another beautiful warm FNQ day.

Early the next morning it is Geoff & My turn to head for Cairns Airport & fly down to Melbourne for a “Brothers Long Weekend”. At 5am our Stepdad, Jens (pronounced Yens, he is originally Danish) arrives to drive us to Cairns.

***In an earlier blog post I talk about my Mum & Jens packing up and moving to Cairns. As it turns out they really liked Port Douglas & now live there***

After nearly a 2 hour delay Geoff & I board the Jetstar plane bound for Melbourne, Victoria. Not sure if Geoff looks this happy because we are finally going or if it’s because we both scored an exit row seat with abundant leg room.

Geoff & I catch up with our youngest brother Steve at the Melbourne Airport & we share the ride into the city. The next day our son Hayden & his girlfriend Kirsty arrive, which is cool as they will do their own thing. I won’t go into all our Melbourne exploits but the big event that we all went to was the Round 18, Australian Rules Football game at Etihad Stadium to watch Collingwood (Magpies) narrowly defeat the West Coast Eagles. It was all good fun, on the Monday Geoff & Steve both flew back to their respective homes. On Tuesday it was my turn to head home & after having to change their flight, so they could make it to Joe’s memorial service, Hayden & Kirsty flew home late on Thursday. 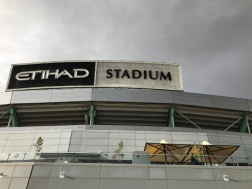 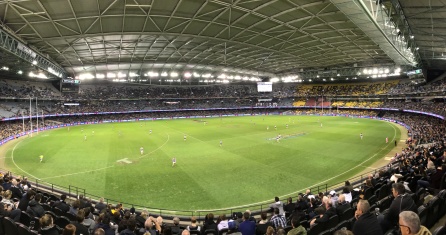 On Friday the 27th of July we all attended (Poppy) Joe’s memorial service held at the Pinjarra Bowls Club. Joe did love his Lawn Bowls, there was a good sized turn out of over 120 people, including some of the NZ family & it was a nice service.

Since Jenny is from a “blended” family all the step-siblings were there along with their predominantly adult children……Joe’s grandchildren. It was possibly the only time all of Joe’s grandchildren have been in the same place at the same time together. Fortunately Jenny’s older sister Sue (who had flown in from the UK) was on the job and snapped what will go down in family history as a very rare photo.

Meanwhile back at the Mandurah, Travel Home Base (THB) all is not well in paradise. Jenny & I are currently trying to cohabitate with my 71yo father Bill. The experiment is not working ! Obviously it’s ok & works when we are not here but when we are home at the THB there is no privacy & many small things happen that add up to one big thing. Sorry Dad, our house our rules….
I love my Dad but can’t live with him, it is also affecting Jenny & my relationship, so best not to let this issue drag out & nip it in the bud. Dad & I have had the talk & he is going to find somewhere else to live. No immediate rush as we fly back to Queensland in a few weeks & then will spend 6 to 7 weeks riding home. So Bill has approximately 10 weeks to move out. As the saying goes, “Live and Learn”.

Upon Jenny’s return to the THB, she needed some transport, after reconnecting the batteries she managed to get the old diesel Landcruiser to fire up. Stupidly I didn’t disconnect the battery on the little 883 Harley Sportster & since the shed hasn’t had power connected to it yet I’m not using any 12v trickle charge set up.
So a few days after my return from Melbourne I find myself down at Mandurah Yamaha/KTM purchasing a new 12v starter battery for the little purple Harley.

During the past couple of months I’ve been mulling over our Motorbike situation. Jenny says she isn’t really that interested in upgrading her little LAMS Honda CB500X, she loves “Little Bubby” as she calls her bike. I must say it has certainly impressed me during our Oz Tour & I would highly recommend it to anyone. So that got me thinking how about a couple of ADV Style Bikes for long distance touring which we both already own & are happy with. Along with a couple of Cruiser Style Bikes for the local, 1 to 2 day stuff.

Shit we already have the XL883N Harley Davidson Iron Sportster, so why not a second Cruiser. Then when we go for a short weekend blasts by ourselves or with our mates (most of who ride Cruisers & I find myself having to slow my riding style on the Tenere so they can keep up) we can take the Cruiser styled bikes….sounds like good fun & solid plan to me. 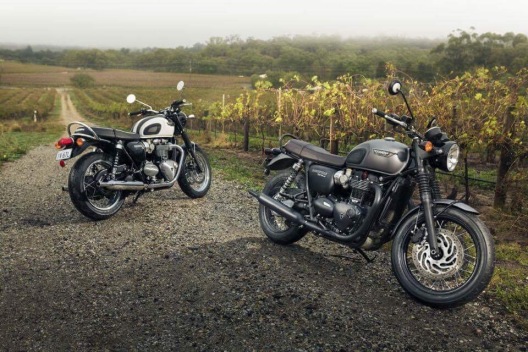 Here are some pics of the other potential suspects. I actually like them all,  in reality they are all newish models all being released in 2016, so finding a reasonably priced secondhand one is near on impossible. I let my $$$ brain & random opportunity make the decision for me.

After sleeping on it & getting Jenny to reluctantly agree to my latest scheme, taking it for a test ride, we now find ourselves being the proud owners of a 3yo near new, still with 2 years Factory warranty remaining, Yamaha Bolt. This is going to be “FUN”, I haven’t out laid to much cash, I love the look of the Bolt, it rides really nice, not an ounce of “Buyers Remorse”. I don’t have an issue with my penis size so a 942cc V-Twin motor is heaps big enough for me. We can now go riding together again while at home, well once Jen is over the bad Head Cold we can.

Jenny & I, with the help of out two favourite contractors, Rohan (Front Yard Landscaping) & Grant (Front Gates) have also made use of this 6 week trip home to get some more jobs completed on the THB. The plan is to have the Front Yard & Gates all done before we continue on with our epic around Australia Ride.

Lastly we finally put Poppy Joe to rest yesterday (Saturday 5th of August) up at Oakley Dam. Scattering his ashes & toasting drinks to all the good times & memories that little Scotsman, Joseph Chalmers left us with. Rest in Peace, Old Mate you will always live in our hearts. (1941 to 2017).

Joe’s Family head up to Oakley Dam, Neil, Joe’s oldest son says a few words, he scatters the ashes, we all toast a few drinks to Joe’s memory & that is that.