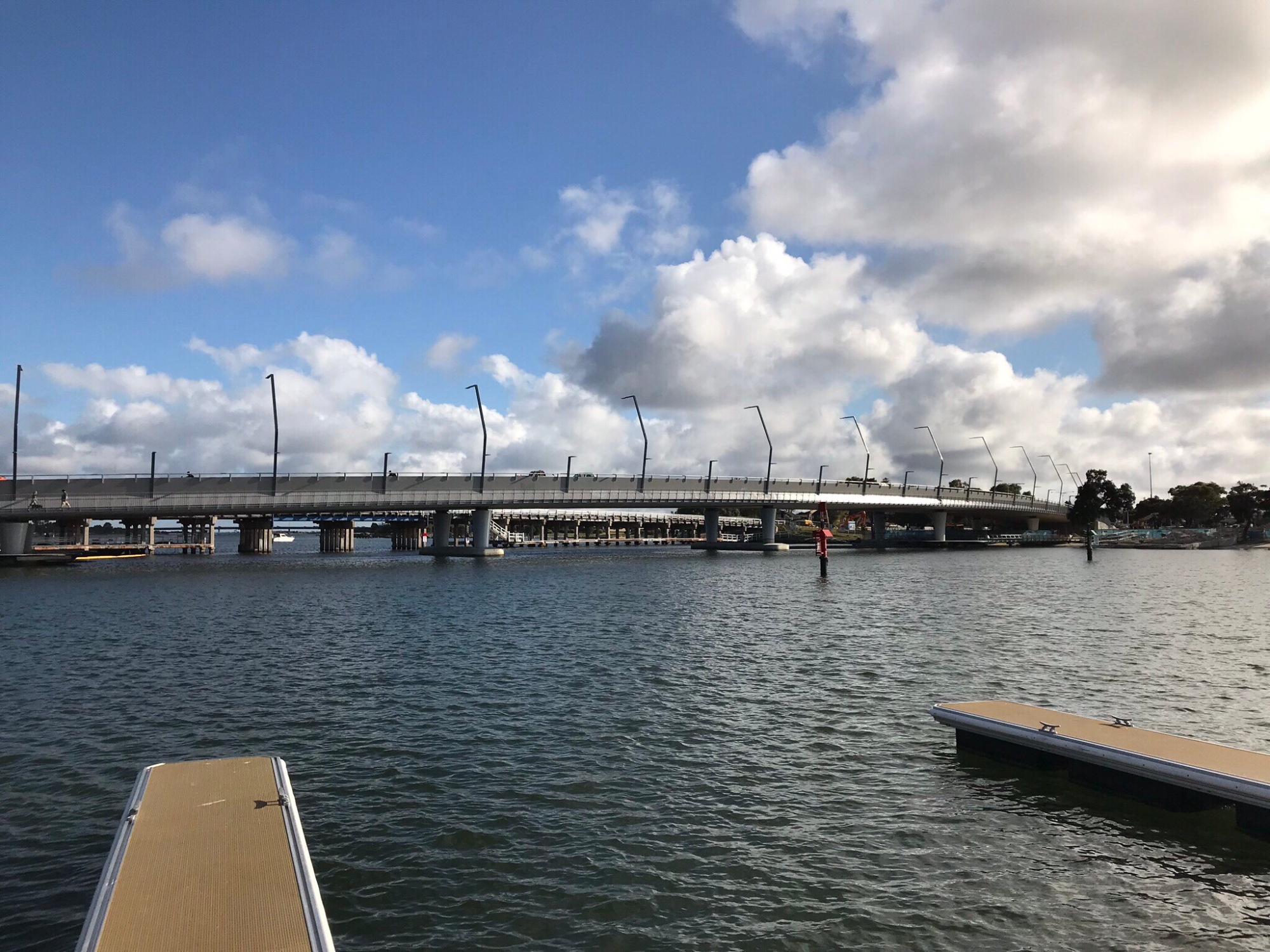 Enjoying a bit of Home life & planning our next Big Adventure.

Life is currently enjoyable at the THB, Jenny & I did spent a couple of days sulking early last week as we came to terms with the fact that our Australian Motorbike Tour was over. The Mandurah weather hasn’t been all that flash so not much two wheeled action as we would like. Certainly not normal for Spring.

We’ve done some constructive work around the house, a bit of gardening, moving furniture around & I’ve started servicing the (to many) vehicles. Super Tenere, Landcruiser & Bicycles all sorted out so far. Only 2 Motorbikes & 1 Vee-Dub Kombi to go.

We have been out on the Bicycles a couple of times, mainly to do shopping. Jen & I are trying really hard to leave the Landcruiser in the carport. So far so good !

We have also had a couple of visitors, which has been great. Firstly there was Adriano & Clariana, the young Brazilian couple who are travelling around Australia 2-up on a Kawasaki KLR650. They stayed with us last Friday, we had originally just invited our oldest (by time not age, ha, ha) friends, Darren & Delys over for dinner. Then on short notice the Brazilian’s contacted us. No problem, it turned into a memorable night.

Darren & I had planned a weekend overnight Motorbike Camping trip, so after seeing off the Ruta Roots team (check them out on FB) , then seeing Jenny off. She had some personal business to attend to, I loaded up the S-Tenere & headed over to Darren’s place.

He was ready, so we didn’t muck about & under ominous sky’s headed east. After 190kms we ended up at the Dryandra Forest. We camped at Congelin for the night. Dinner, drinks, camp fire and good company. Sadly we couldn’t see any stars, about 9pm it started to rain. Darren & I moved to a nearby shelter, polished off the last of the Shiraz then headed to our respective tents. 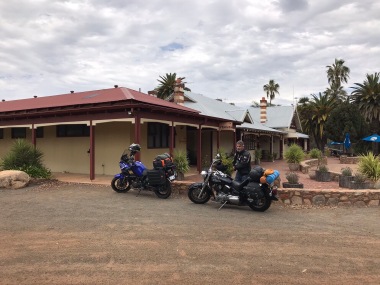 Daz & I stop at the Quindanning Hotel for lunch then carry onto Congelin for an overnight stop.

It rained/drizzled most of the night. At 4.30am I got up for a wizz, the rain had stopped, I could hear Daz quietly snoring in his tent but in the distance I could see lightening & hear the sound of distant thunder. Shit I hope that doesn’t hit us !

30 minutes later, we copped a direct hit from the Thunderstorm. I don’t know how much rain hit us but it was a lot. Everything was wet, sheets of water flowed down the hillside getting into our tents. We were not happy campers, I did my best to just ignore it & fell back to sleep. 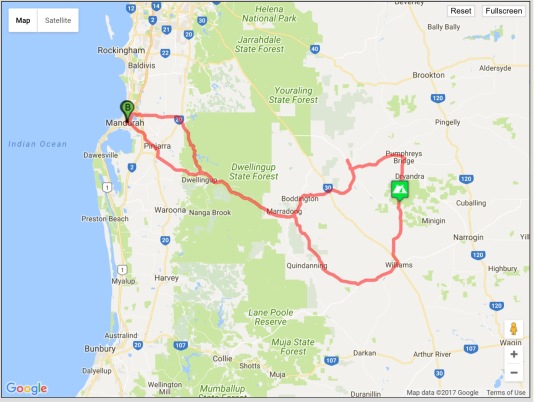 It Buckets down with rain overnight. Map shows our proposed route, there was a 10km section of gravel road, which turned to sloppy mud, so we modified our trip back home a little. 380kms.

Darren got up & packed his gear just after 6am, I managed to hold out until nearly 8am. There were about 5 other groups of campers parked up around Congelin, most had gone by the time I got up. The last stragglers left by 9am, Darren & I sat it out until the rain stopped & headed off at 10.30 with everything saturated. 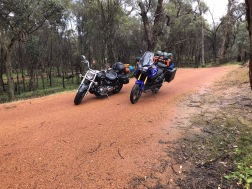 Wet, wet, wet….everything was soaked. Also the Dam is full, when Jen & I were there last January it was empty !

We took a slightly different route home & stopped at the Dwellingup Hotel for a beer. There was heaps of other bikes at the Dwelly so we enjoyed checking them out while having a beer in the sunshine….overall a pretty good weekend…..380kms.

At least the sun was shining back in Dwellingup, lots of bikes out on a day ride, Daz checks them out. Also spotted a nice Lowlight Bay VW Kombi as well.

Jen & I were also lucky enough to catch up with a Swiss couple (who we met back in Timber Creek NT during our ride), Jerome & Tatjana. They had just spent a quick 6 weeks driving from Sydney to Perth in a hire Camper & were due to fly home to Switzerland on Tuesday. On Monday they caught the train to Mandurah & we cooked them dinner. Nice couple, hopefully we will cross paths again. 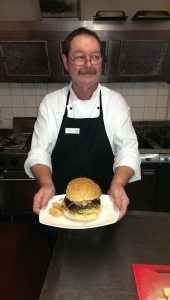 On a positive note October the 23rd marked the third year anniversary of us walking away from the Roadhouse business (well actually we drove away, with a full tank of petrol 😀). It was also the last time we did any “real paid” work. No regrets there but I do miss some of the people, Staff & regular Customers. Certainly don’t miss the stress, early starts & corporate bureaucracy !

Wilfred, the old Canadian Chef at the Placid Ark Roadhouse, great bloke, we use to have some good laughs 😀👍.
The last 3 years have been absolutely amazing to us both. We have seen so many new things, met so many incredible people, with lots of them now being friends. Some of our experiences have been totally mind blowing, the cycle touring in Europe a big highlight. Just living our lives without the demands caused by excessive debt has been liberating. Spend less, buy less, live simply, stay out of debt….we are doing our best to follow those principles with the occasional trip up.

Our Travel addiction has been pretty costly & the income from our 2 rental properties, buying/selling shares & aggressively downsizing our lifestyle has barely kept us ahead of the game. All this means we are open to doing some “paid work” in the future when that time comes around.

In the meantime we will keep downsizing, travelling & learning new things. On Saturday we will be giving our first 50 minute public, travel talk to a group of fellow Adventure Travellers at the Horizon’s Unlimited 3 day gathering in Fairbridge. We will be talking about our 2016, 56 day Indian Motorbike Tour. Exciting but Scary, some of these people are far more experienced than Jenny & I could ever hope to be. I’ll let you know how it goes in the next Blog update.

In the meantime, take care & if you have not already, find away to live the life you deserve.