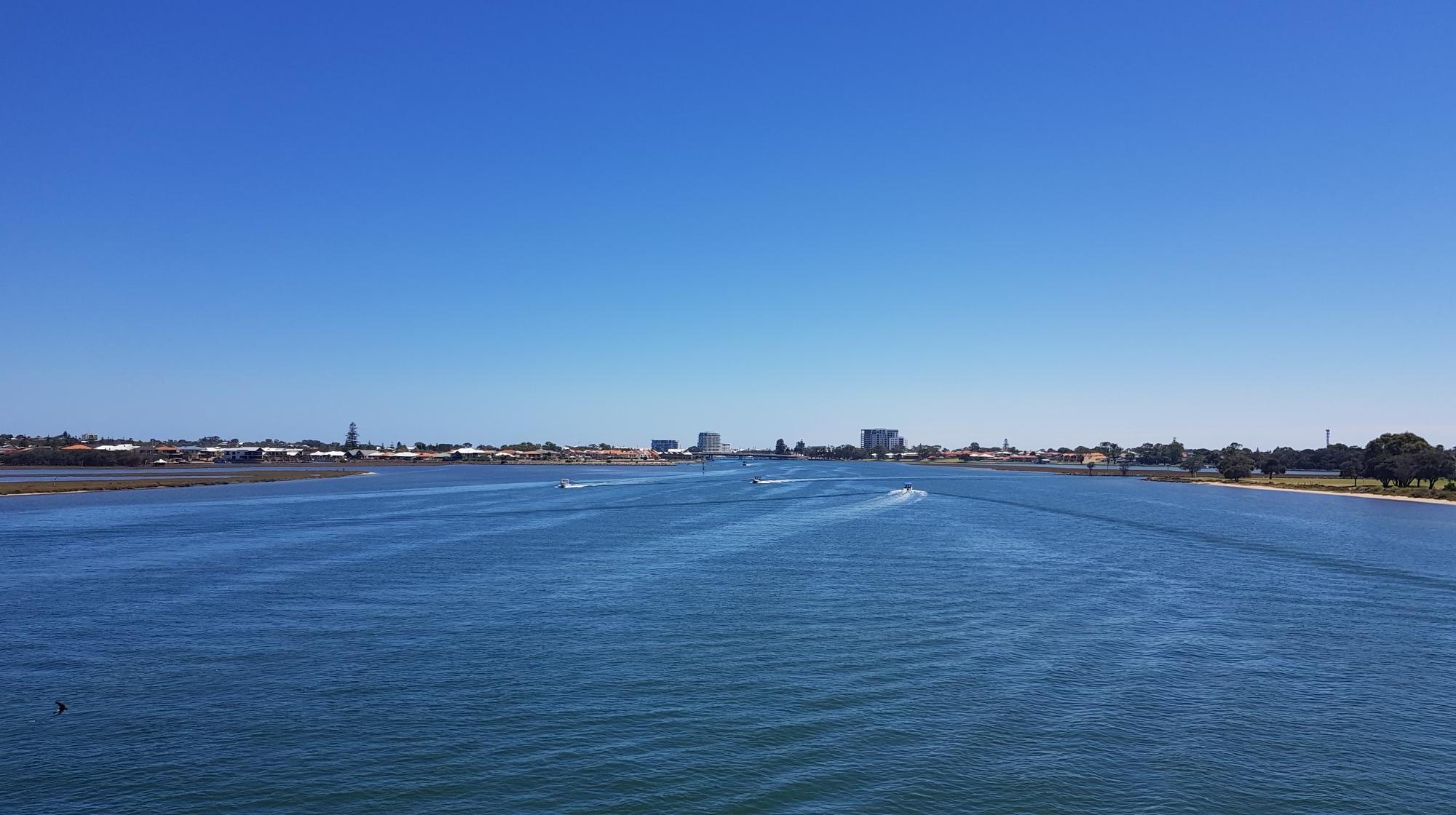 Cover Photo: Looking North towards Mandurah on the Bypass Bridge, now known as the old Mandurah Bridge to us 🙂

Well, what a New Year’s Eve we had. It was going to be quiet, with just five of us, but I think we did ourselves proud, with lasting till well after midnight, sharing a bottle of toffee vodka (this is dangerous stuff) along with many other beverages, and letting off some very cool fireworks,in the back yard. Needless to say, we were all very sluggish, starting the new year for real. Ha ha ha ha. 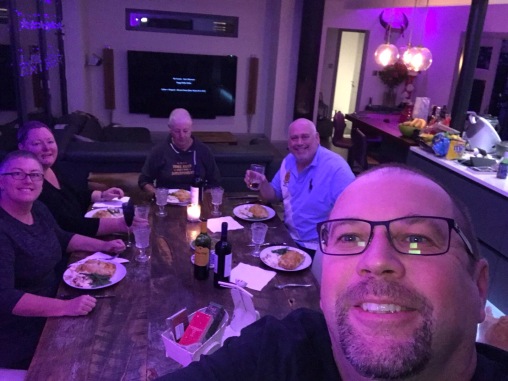 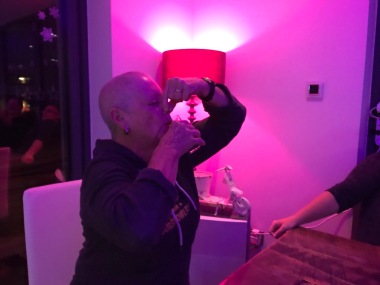 A delicious dinner of Beef Wellington, cooked by Sue, some fine Red wine, it started well, but then the Toffee Vodka hit the table. Oh dear Mumsie, don’t do it! Too late, but she is mature enough to stop at one. Not like us.

The last week in the UK, we spent relaxing with Sue and Brad, having a couple of rides on the cool little Brompton bikes, and Will did a bit of sight seeing. It was an awesome adventure, but we were well ready for some sunshine and warmth, and we desperately needed to go to rehab, and Jenny Craig. Even with that, it was still hard to leave my big sister again. It never gets easy. We don’t do long goodbyes, just a big hug, and a quick get away, or there’ll be tears. So we jumped in a cab (Clive is one of Sue and Brad’s friends who has his own cab, and was kind enough to drive us on his day off) and begun the long journey home. 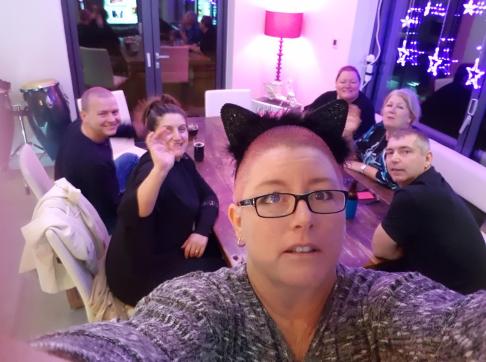 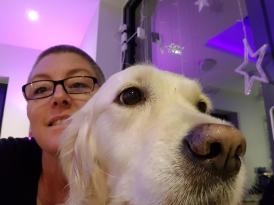 New Year’s Day started very slowly, but finished well after the races, where I won £30, chilli and a few Bloody Mary’s all around. Some more shenanigans, and our very short hair got a dressing up with some colour. Then a relaxing cuddle with the doggies. We also got Sue some “Straya Animals” for her collection. 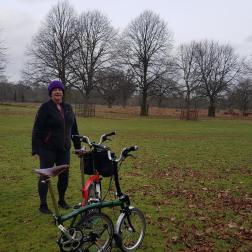 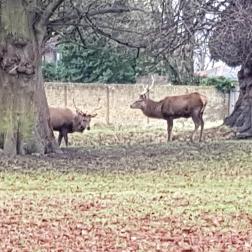 Mum and I took the little Bromptons on one last UK adventure, riding from Walton-on-Thames to Hampton Court, Bushy Park, and back. It was 20kms, and we enjoyed it. Mum hasn’t ridden a two wheeled bike for ages, she has a trike, but smashed out the kays well. We even got to see some deer in the park. Mum almost stepped on one laying in the leaves. 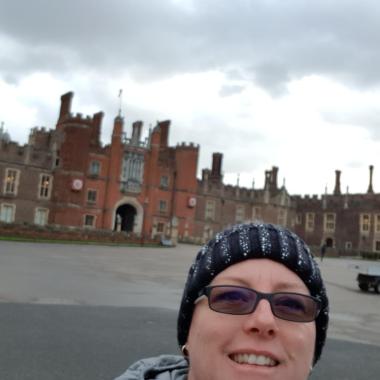 We had a short wander through Hampton Court Palace, basically just taking a short cut to use the loos. 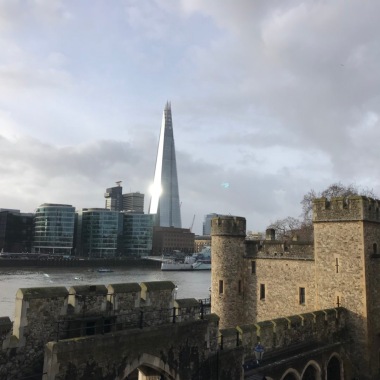 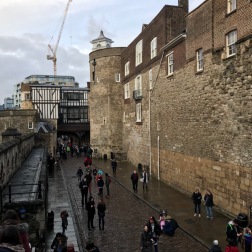 Will ventured into London for some sight seeing, walking around and checking out The Tower of London. One thing we’d missed on previous visits. 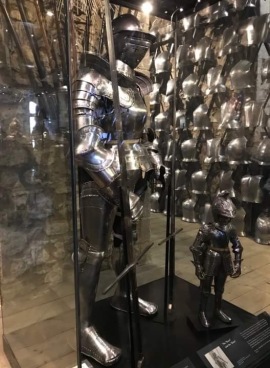 You can’t deny the amazing history recorded here, and everything is large. A suit of armour over 7ft tall, made for “Little John”, and even a sneaky pic of the Crown Jewels. Will really enjoyed The Tower of London, and recommends a visit.

I just love a good dragon. This one is awesome. 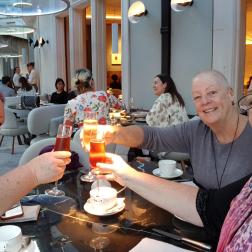 Sue was given a High Tea for 3, at The Connaught (extremely fancy Hotel), so the skinheads went to tea. It was out of this world. Champagne, finger sandwiches, and the cutest little cakes. Let’s not forget the required scones, which were the best I’ve ever had. Oh, and the tea was good too. 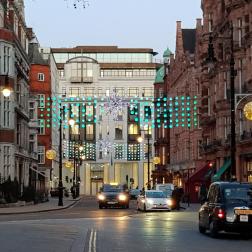 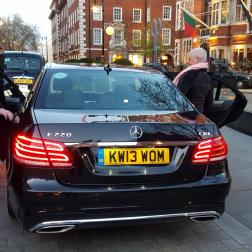 We took a stroll around Mayfair, to admire some of the fancy shops, and pretty Christmas lights, before getting in a posh Uber back to plebsville, Waterloo. It was a cool experience, and we felt very special. 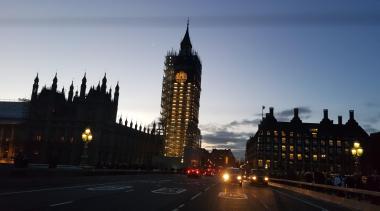 The Eye and Big Ben, on the way back to Waterloo station. It was a beautiful, clear, crisp night, and the city looked amazing.

Next was prepping the bikes to take home. First a thorough clean to avoid any customs issues, then Will did his thing and got them neatly into their boxes, ready for the journey across the world. 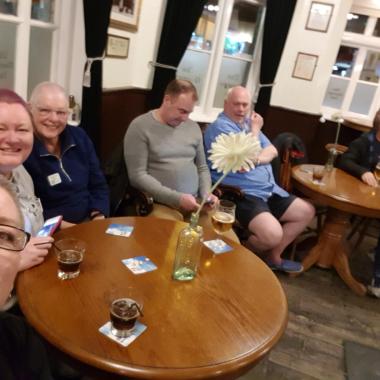 Final fairwells with all the amazing friends we have had the pleasure of meeting. These are the core supporters of Louise, who is the very special lady we shaved our heads for (raising £10,000 ) and just an awesome community. It was very emotional saying see ya, and I struggled to hold it together long enough to get outside. Then I cried a lot. Better out than in.

Lines and more lines, but no hassles. We arrived with 21kgs between us, and left with 51kgs. Oops, but still within our allowance. Good work team Wiljen.

It is a pretty hard flight, 24hrs door to door, and we were happy to be collected from the airport by our house sitter, Murray. He even cooked us dinner, before we crashed at 7:30pm. The jet lag hit us hard, and it took us about five bloody days, before we were almost normal. Lots of falling asleep on the couch at odd times of the day, and waking up way too early, but we got straight into our rehab by doing a half hour yoga session each morning, and trying to use our bicycles as much as possible. Aside from driving to the airport to collect my Mum, we didn’t use the car at all in the first week. 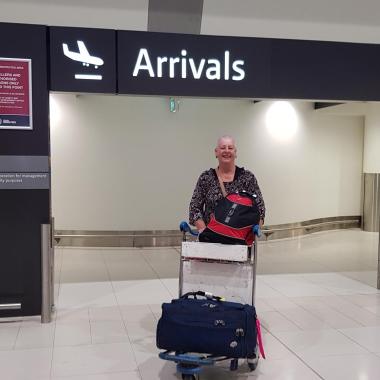 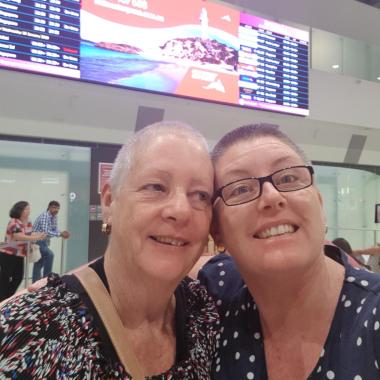 Yoga with Jen Hilman, on YouTube, which I’d totally recommend you check out. She is great, and easy to follow. Jen Hilman Yoga . Great to take “Lady Red” out for a spin into town for some personal grooming. Even if I did turn up a day early…bloody jet lag. Ha ha ha.

Luckily for us, the temperature has been pretty mild, for a WA summer, so the transition from winter, wasn’t too dramatic. It was perfect for cycling, and some gardening. So we’ve pretty much just been getting into some good habits, with not too much drinking, and as much cycling as we can. Doing the shopping on the bikes has turned out to be easier than imagined, and one person can do a big shop with four panniers, and I even rode down to a local car boot sale, and got some cheap plants for the garden. It was no problem bringing them home in my panniers. We’ve also done a couple of bigger, 20+ kilometre rides around our pretty town, and the old knees are doing well. Slowly getting stronger, and with some new medication, I’m getting less pain and managing to do more. Positive progress. 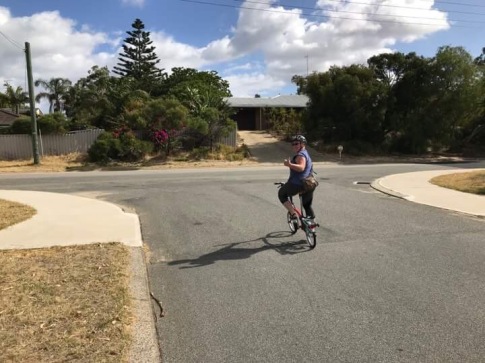 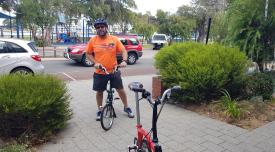 Short Brompton ride around town and back, only about 5kms, but good fun. 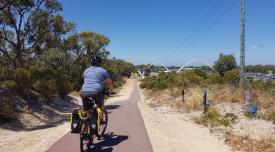 A catch up with good friends, Nicole and Barry, and getting our much needed veggie fix by shopping at Gilbert’s. A nice ride and no trouble parking. 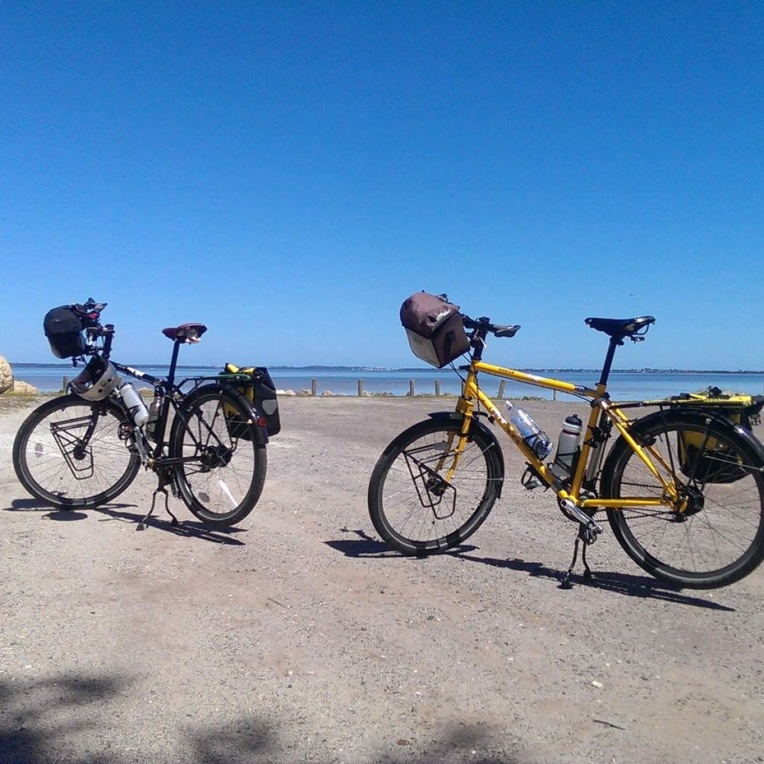 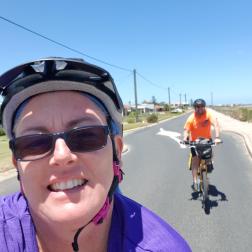 A stunning day for a ride along the northern beaches, with a refreshment stop at Tides cafe, before heading home. Not quite 20kms, but great easy ride.

The poor old motorbikes have been neglected a little bit, so far, although Will went on a big ride with friend Grant, and the Nevermind crew, and had a fantastic boys day out. We also have another ride with the Suzuki group coming up, before our little trip to Tassie. So with our health at top priority, and a few small adventures coming up, we are enjoying our Travel Home Base, and the beautiful West Australian summer. You really can’t beat it.

Another smashing day, although it did get a bit warm, almost hitting 40C on their way home. 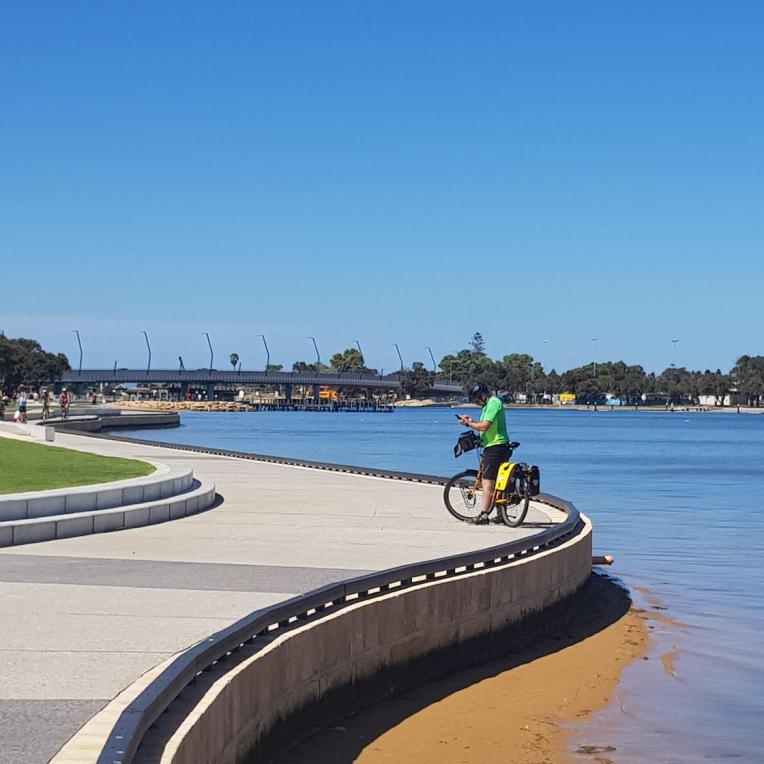 The latest ride, we headed south along the beaches, before heading back to town. Almost 23kms on this one, and it was spectacular. 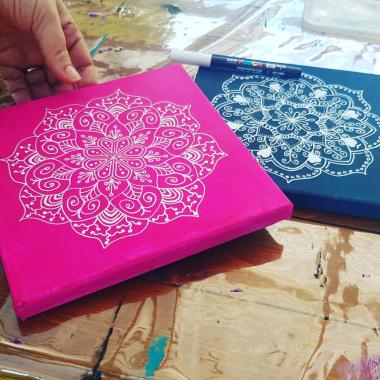 Riding around this region is so pleasurable, and there are many great cycle/walking paths. We’ll be trying to do a couple of rides each week. I also spent a day with my friend Delys, from Dilli Delli , check it out, helping her prepare for her next Mandala workshop. It was very relaxing and we had a lovely day. Lastly, two of our children had birthdays this week, and our youngest daughter’s boyfriend Jake too, so we had a bit of a get together which was fantastic. Our son Hayden showing how to relax, good job son.