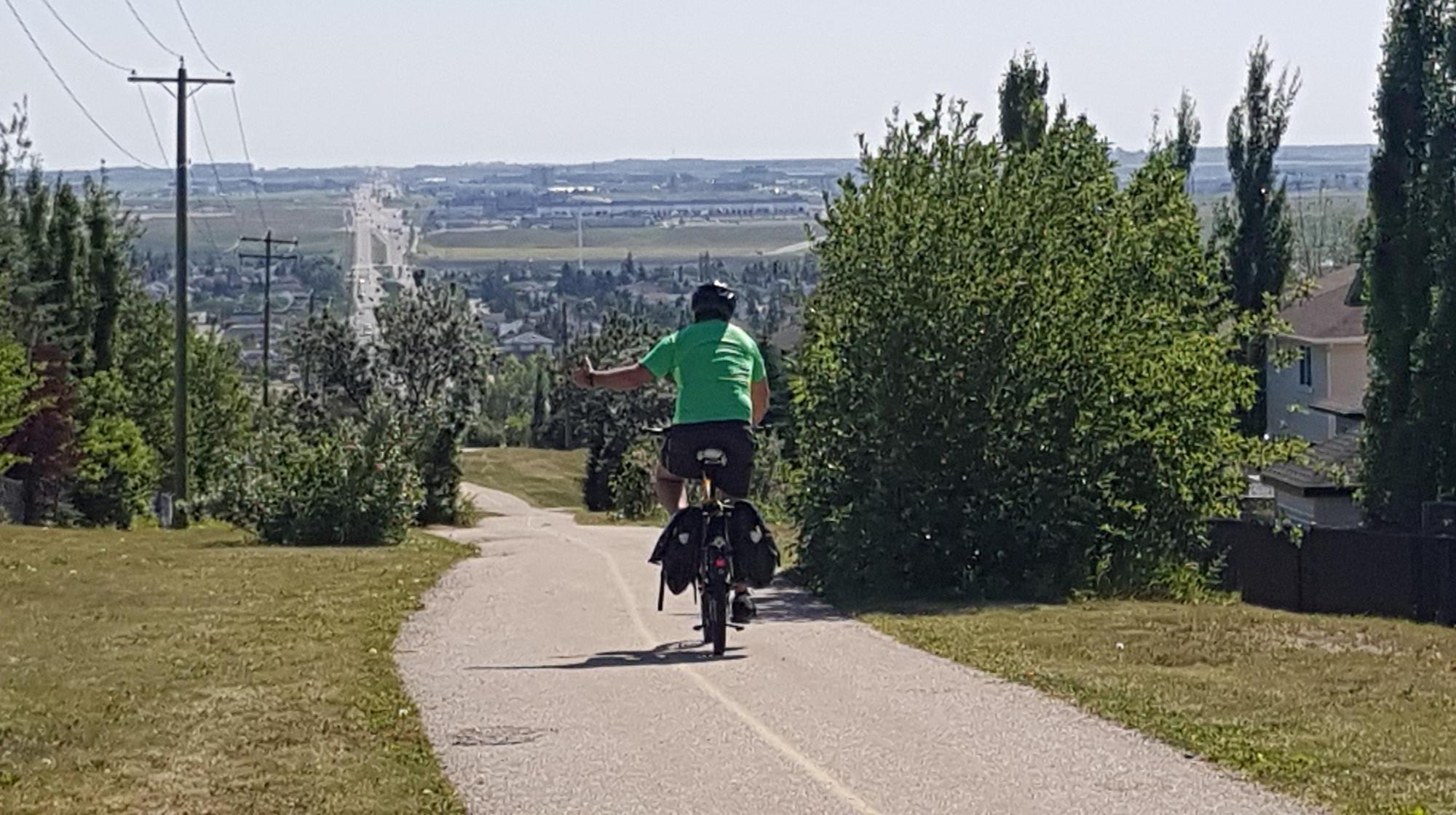 Jobs day today, so we had made plans to meet up with Alyssa, from Campers Village, to collect our new camping gear. But first, we had to stay put to receive our much loved bikes. Around 10:30am, there was a knock at our door, and as Will was on the phone to Qantas, re-organising our return flights, (another story) I raced up the stairs as fast as my dick knees could go and opened the door. A very nice man with a big smile on his face was standing there, as I asked, very excitedly, if he had two bikes for me. He did, but I’d better come and make sure they are the right ones. What, they lost other people’s giant boxes? 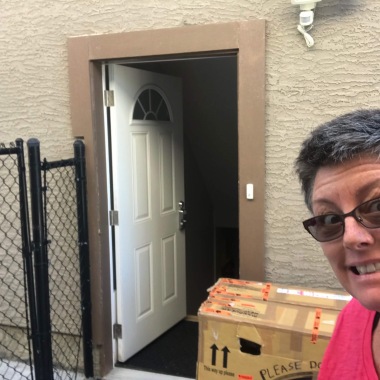 Yay, they’re here! Bloody ratbags, that’ll teach them to go off on their own.

Well, it was definitely the right boxes, although they looked a bit worse for wear.  I signed them in, and when Will got off the phone, he whisked them down into the basement. They had been opened again, and re-taped, so we assumed they had been frisked and fondled by TSA (Transportation Security Authorities). Betty must of resisted a bit, as she had some damage to her rear rack, but Yellow Dawg was in good shape. Phew, that was close guys, now let’s get you together. 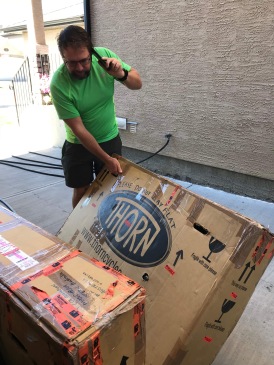 So they really do like to inspect bikes leaving the USA. A little communication would have been good guys.

First, we have to head off to Campers Village. For a couple of months, I have been emailing Alyssa to organise some new camping gear, and we could finally meet and thank her for being so helpful. It is about 25kms south of us, so we just paid for an Uber. The bus system was a bit too complicated, and would take an hour and a half. Campers Village is a family owned business with only three stores,  and we were surprised at how much cool stuff they had inside. Alyssa and the team were great, and had collected the big stuff weeks ago. She came out with a massive box. We also had a list of smaller items we wanted, so we ran around the store and grabbed all that too. Then Will went clothes shopping in store, then we paid the huge bill. It wasn’t a surprise, except that Alyssa gave us an awesome discount on everything.

Thanks Alyssa, hope you enjoy those Tim Tams, they are the best biscuits in the world, all the way from Australia.

These guys were fantastic, and I would totally recommend them if you are in need of anything. Check them out online at Campers Village , or on Instagram and Facebook . Alyssa even gave us a ride down to the nearest bike shop, so we could get some oil and a bike lock. It was 3.5kms away, and I didn’t think my knees could do the return journey. Bloody good work guys, so nice.

I can’t say the same about the bike shop, who were not really interested in helping us, and gave us the impression they didn’t think we were serious cyclists. We’re not, but we do know what we need. Never mind, we’ll head back and sort it out somewhere else. So we walked back, stopping at Co-Op (another grocery store chain, for some food supplies, and as we’d bought our own bags, they donate 3c per bag to charity. Cool idea. Carrying on the walk, on a beautiful 30C day, up and down the hills, my knees were feeling it, and we were getting thirsty, and hungry. So we stopped at Limericks, a pub chain, (lots of chains) and had a beer and steak sandwich. Well, a nice piece of steak on a nice piece of toasted bread, with a mass of fries. Hmmm, no green stuff. Noted!

Back at Campers Village, we ordered an Uber, and when it arrived, a lovely Kenyan woman was driving. She opened the back of her Honda Acura, so we could put our massive box in, and didn’t know how to put her seats down. Will figured it out, just as we spotted, there in the empty boot space, an empty bottle of Bourbon. She was mortified, and quickly stuffed it under the boot liner. “It’s okay”, I said, “As long as you didn’t drink it today!” “no, no, no, it was on the weekend..” Ha ha ha, it was so funny. Anyway, Eddah, was really nice, and drove well. She told us she usually drives the big dirt trucks on construction jobs, and this was her and her husbands, side hustle. “You got to have a hustle.” she said. I know someone else who tells me that….Dilli Delli!

Down in the basement, Will got busy with the bikes, and I unpacked, checked and re-packed the camping gear. It all looked good, and we have everything we need. A few minor adjustments to the bikes, and they too look ready. Yippee, it is really happening. 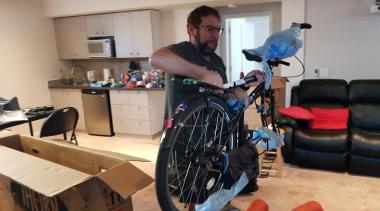 Black Betty is coming together, with a few hassles, but nothing Will and YouTube can’t fix. Good work Willsie. 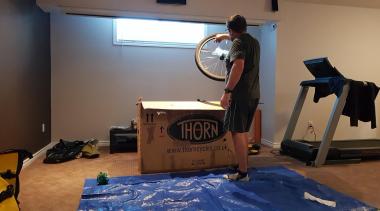 Yellow Dawg is always a bit easier to handle, and goes together a bit quicker.

Our body clocks are starting to adjust, and I was asleep like a zombie, by 9pm. This meant we were awake early, and sorting our gear into panniers. Both of us seemed to have more spare space than we had before, so this is good. We still needed to get food for two days, on the road, and test ride the bikes, so it was time to get out and about on them. 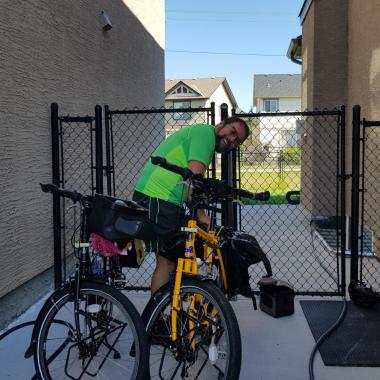 A bit of air in the tires, and a few seat adjustments, and we are ready for our inaugural ride in Canada. Do you think I am bright enough?

The Home Depot (think Bunnings but larger) is 2.7kms away, and all down hill. Note to self, Panorama means views, which means hills, and Panorama Heights  means the top of the hill. All good going down, but then when you are loaded, you have got to get back up. Right! But it was a fun first ride, down, and the bikes went fine. A couple more seat adjustments, and we were sorted. Home Depot didn’t have what we wanted, a small roll of duct tape, and a couple of other items, so we went next door to Canadian Tire. We thought it was just an auto shop, like Auto One, but it had everything. So Will cut sick in there, and eventually came out with all he needed, except duct tape. After our cereal without substance, we were hungry, so we popped over to Boston Pizza Sports Bar, and had lunch. Well two lunches, the serves were enormous, and so was the “Handle” of beer.

We found a drive through ATM, so took advantage of that, then at lunch, the surprise on Wills face at the size of his beer, is priceless. Hope the cops don’t pull you over after that, apparently here in Calgary, you can get a DUI on a bicycle. Take the back roads, I think.

One last stop for food, at Real Superstore, before heading back up the hill. It was pretty hot now, and the hill was not short and steep, just long and half steep. Oh my god, I am going to die. I’m not even fully loaded, and I am breathing like a serious asthmatic. I did have to stop and catch my breath up the second hill, but my knees were hanging in there. This is really going to hurt for a couple of weeks isn’t it? I curse my lazy arse, and keep going. What’s the worst that can happen, I get eaten by a bear. Oh well, could be worse. 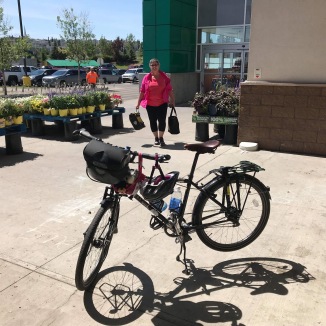 Trying to be plastic free is a challenge. We have reusable bags, but everything we buy is in plastic. Bummer. The perfect beer for successfully making it up the big hills. Cheers guys.