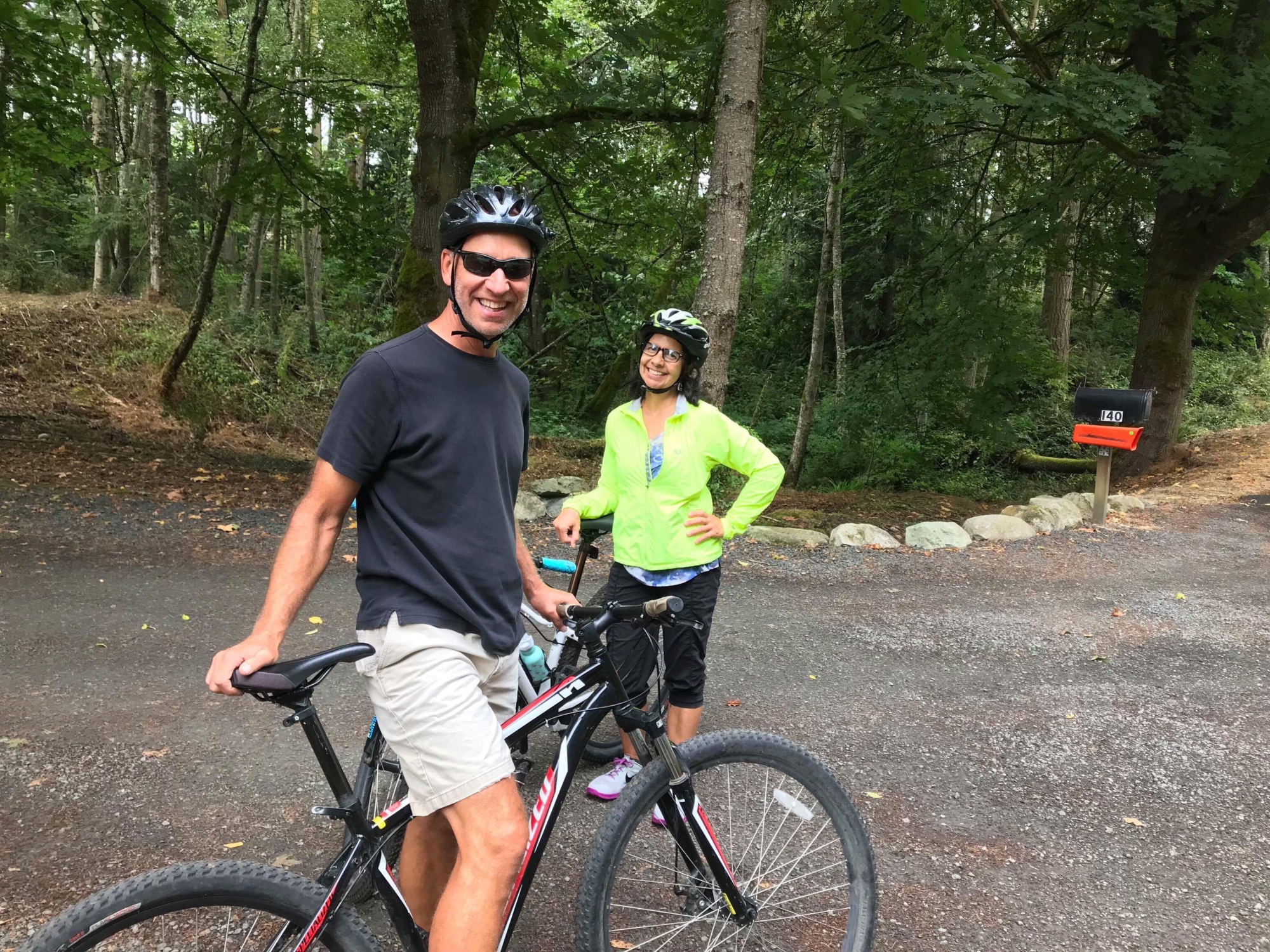 Now here is another amazing day. We woke up early, ate our granola (nuts and berries) and packed our gear. Nothing unusual there. Will recovered the bikes from the dungeon, and we loaded them up. Had a chat to a fellow hotel guest, then headed to the Ferry terminal, all of 1.3kms down the road. There was a dedicated bike lane, and other than a few sets of traffic lights, there was nothing much to worry about. Opposite the very regal looking Legislative Assembly building, was the Terminal, so we pulled up, and I went in. Two adults and two bicycles, for Port Angeles please? No problem, $50 American dollars, and a small scrap of paper we were required to put our names on, and that was that. 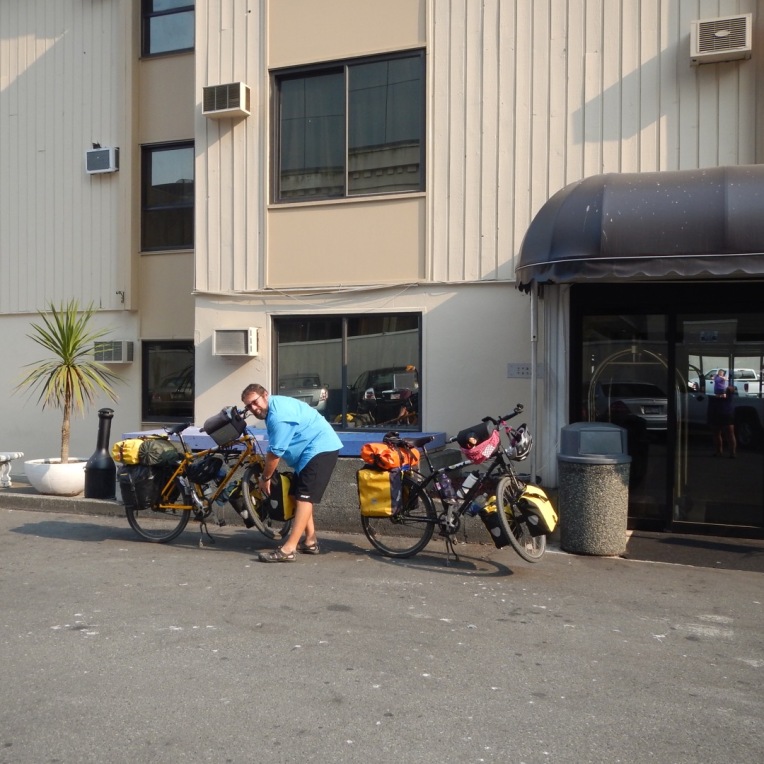 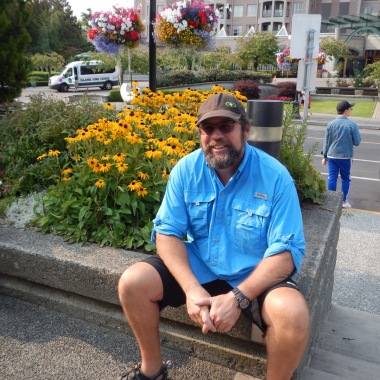 Load up kids, we’re going boating. This is way too easy.

All that was left, was to wait, so we sat outside, and enjoyed the views. Another Canadian lady had a very lightly loaded bike, so we asked about her journey, she was heading over to ride Hurricane Ridge, an infamous climb in the Olympic National Park. The ride down sounds fun though. Next minute, I noticed another guy pulling up, and that he was even lighter than the lady. He turned around, and it was Solo Mike, from the Gardenside Acres. “G’day Mike, how was your ride?” He had a huge smile on his face, and said he’d loved it. We waited together, discussing our route choices, and next minute, he’d invited us to stay with him and his wife Pat, in Sequim. There is no such thing as no, so that is what we did. 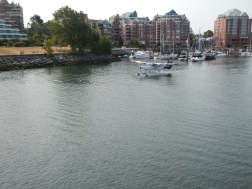 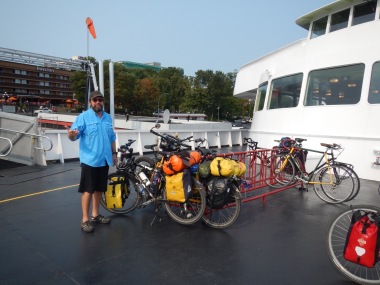 Getting out of the harbour was interesting. There were harbour patrol boats, making sure all other craft, including seaplanes, waited well out of the way. This is a big ferry, 103mtrs, carrying 100 cars and up to 1000 passengers. It wasn’t that full on our journey.

Pat was waiting for us in Port Angeles, with their pick up truck, and the boys hoicked the three bikes (still loaded) into the back. Then we drove the 27kms to the cute town of Sequim. We went straight for some lunch, at a great Mexican place, had a massive burrito, a beer, and all paid for by Mike and Pat. Wow guys, thank you so much.

They took us to their home, which was beautiful, and in a very quiet spot, with views of the water and mountains. Lots of apples and pears growing, and no fences. Great neighbours. Mike took us into town again, for grocery shopping, and to help us get an American sim for the phone. What a saga, that turned into. First stop, Verizon, the biggest telco in the US. The first guy who offered to help us, looked decidedly unable, we agreed he was not stoned drunk and sleep deprived, but mentally disabled. He went to lunch when we asked about Prepaid. Phew, it could have been a long night. Brandy was nice, and tried to help us, but I fear her training was lacking. She kept trying to tell me that my phone needed to be registered on the network, but the network wouldn’t recognise my phone for some reason. Um, because it is the sim that talks to the network, and I don’t have one yet? So off we went, shaking our heads, and tried the Costco. Mike said he’d had good success with them, and as they don’t work for a telco, will give us better information. We agreed, but when we got there, they too were at lunch, at 5pm? Last try, T-Mobile. Starts with a pink shop. Okay! Next we chat to Max, who has a bowl haircut from the seventies, and is the unsmiling telco geek. He has good info, and aside from thinking we were Kiwis, was pretty efficient. A lack of authority forced him to go to his even nerdier manager, who then came in, interfered, stuffed it all up, fixed it all again, then proceeded to tell us the best cycling routes. I don’t think he has ever ridden a bike, unless it was on virtual reality. Anyway, we left there with a sim, and seemingly connected, also shaking our heads at the whole experience.

After that challenging experience, the shopping was easy, and we returned to base. Pat had started on the dinner, and it wasn’t long before we we enjoying some Dungeoness Crab (caught by Mike, locally), delicious steak, and salad. They had also got some Hatch Chilli’s, which come from New Mexico (Pat is from there), and roasted them on the BBQ too. “Are they very spicy, hot?” I ask. “They can be, it depends on the batch.” Hhmmm, are we being set up? Anyway, we all had one, and the advice was to remove the seeds. Done! Then I ate small pieces with the steak. The first half was hot, but nice, then suddenly, on my fourth bite, there was a wild fire burning out of control on the right side of my mouth. Hoo, hoo, hoo! Eyes watering, tongue swelling (well it bloody felt like it), and lips melting off. It was super hot. Whoa!

What an amazing spread guys, a great night. Lot us of laughs, and great stories.

After a good long laugh, cry and a delicious dinner, we enjoyed some red wine, sharing stories, and had a fantastic night. Isn’t it amazing what can happen when you just say yes? So we change our route. So what? We will still get to the Pacific coast route, just a bit later, a bit happier, and we’ll see different things.

Another sleep on a cloud, and although we could sleep all day, we got up around 7:30am. Pat and Mike were already starting breakfast, scrambled eggs and maple chipolatas. Oh my god, those little sausages are the bomb! We had another fantastic meal, a few coffees, more talking (we seem to do more of that than riding sometimes), and then decided we’d better head off. It was a bit cloudy, and rain was forecast. It had rained a bit over night, but didn’t really look like we’d get anymore. Will grabbed a few apples, they had billions of them, and the deer love to come and eat them (we saw them last night, so cute). Bikes loaded, we’re ready, but not ready (we’ve had a lovely time with these two), and Mike and Pat are going to ride with us for a while. Beauty!

There is a fantastic cycle path, that goes from Port Angeles, to Discovery Bay, called the Olympic Discovery Trail. It is brilliant. We road it for 15kms with Mike and Pat, then onto Discovery Bay, where it ended at a wetlands area. Bummer! We didn’t notice the signs, we were so interested in the Cannabis shops that just popped up. It was hard to say goodbye, but they gave us good instructions which had us off the big busy road for most of our day. We were aiming for Quilcene, which would give us a 50km day, and with a late start, we’d be happy with that. But, on the 101, we were having a good ride, until we looked behind and noticed the blackening skies. Oh dear! Next minute, some very loud thunder. Then some sprinkling. We put the pedal to the metal, and raced ahead of it. Lake Leland State Park, was just ahead, and we thought we might find a shelter to wait out the rain. We rolled in, looking desperately around, nothing. It’s starting to catch us, so we just parked up next to a bench, and went to work whipping out the blue tarp, and the silver bike cover to huddle under and wait. Suddenly, it starts to get a bit heavy, and we hear a shout, “Hey, you wanna come wait under here?” We look over, and there’s a couple of guys and a dog, sitting under a caravan awning, with a couple of beers. Hell yes we do, so we cover the kids and abandon them for the awning. Jason and Al, saved us from the rain, and later on, when their tribe returned from a harvesting mission, they shared beer, clams, oysters and Sockeye Salmon. Oh my god, how much better than Uncle Ben’s microwave rice, tinned chicken and some veg, is this? What a great bunch of people. Eight kids, and four families, and all very giving and lovely. Another great night, with generous Americans. 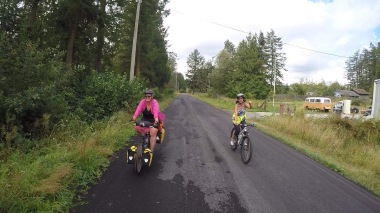 It was a glorious path, and we got stopped by some old cootes who were lovely, and encouraged us and confirmed our route after Mike and Pat wouldn’t return home. It was a good mornings ride.

Too busy checking out the Cannabis Train, we didn’t spot the signs, so rode another couple hundred meters to find it actually did end right there. Poop.

Al, Jason, Dotti, Will, Justin, Hilda and I am so sorry for forgetting everyone. They were all so lovely and took good care of us. Kids were great, and had a ball, being free to run and play. They all helped collect the clams and oysters, and they really enjoyed eating them too. Cheers guys, come to Aus, and give us a call.