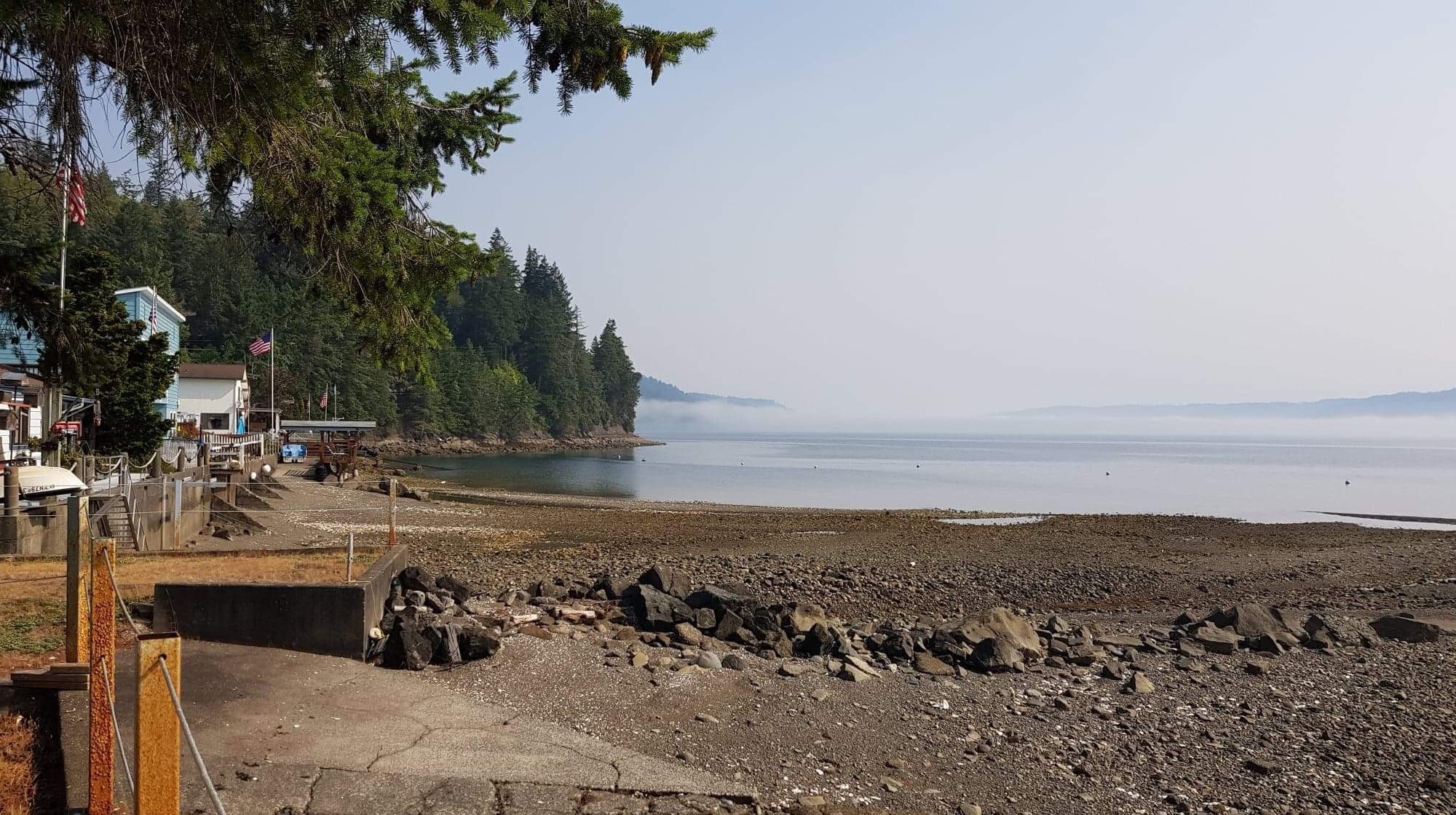 The Hood Canal from opposite the Creekside Inn. Lillewaup/Hoodsport.

It rained over night, and everything was wet in the morning. Bummer. I hate packing a wet tent. We’d also been slimed by slugs, the giant brown type. All over Will’s side of the tent. Aha ha ha ha, there was even one waiting at his doorstep. Yukko, slimy buggers. Unfortunately it was nuts and berries for breakfast, and a couple of coffees, then pack the wet tent to go. Not before thanking the crew, again, for their hospitality. Our first stop today, was Quilcene, our last grocery opportunity today, and also to get more water. There was none at Lake Leland.

The grocery store didn’t have much, but I scrounged around and found a frozen chicken breast, some milk, and some more ziplock bags (we’re out). At least we still have some veggies, cheese and salami from yesterday. Next mission, was to get up and over Mount Walker. It is nowhere near as high as any of the Rocky Mountain hills, but it was still a long, and sweaty slog. It was almost exactly 5kms up, then a nice easy 5kms down. Now we just rode, up and down, up and down some hills. It was still overcast, and quite humid, but not bad. The road ranged from good shoulder to stupid dick shoulder with a death drop off. Again the drivers were pretty good. 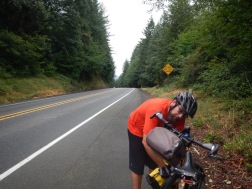 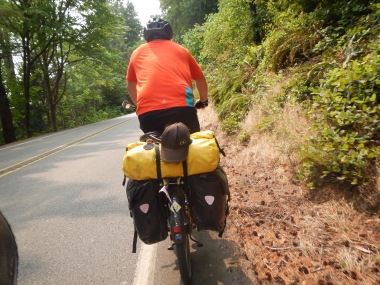 We stopped halfway up Mt Walker for a snack and a breather. It was really damp and humid. The photos don’t really show how dick the shoulder is, or how death defying the drop off is either, but believe me, it was concentrate or game over.

There were heaps of State Parks we could have camped at, but we really want to try for around 60kms a day, so decided to push on to Lillewaup. Not before taking a lunch break in Brinnon, where it started to rain, just as we finished eating and were ready to go. Oh well, we just settled back in, and watched a family playing a card game, and having a lot of fun waiting out the rain. I also picked and ate some blackberries, they are just everywhere. I think they might need some goats to clear it up a bit.

By mid afternoon, we were both a bit tired of the roller coaster, with the death defying ditch off the shoulder. It was a struggle to push on to Lillewaup. We’d had some good reports about a little motel there so had our eye on that. It is a very pretty area, with lots of rainforest, some pretty tall mountains, and lots of little waterfalls on the roadside. It was a good ride, but lots of small hills. After stopping at the little general store, we tried to ring the Creekside Inn, to make sure we got in, but my phone would not make any calls. Ugh, what had the T-Mobile geeks done? I had data, but no calls. So we just rode the 3 kms more, and then Will called from his expensive Aussie phone, and Leo came across the road to greet us. 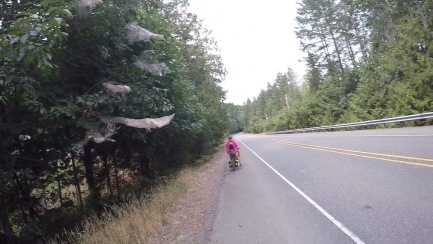 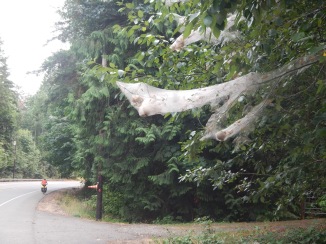 We have been seeing so much of this web, or silk type stuff on the trees, all along our journey, and wondered what it was. One follower on the Crazyguyonabike blog, told us they are Tent Catapillars, but after looking that up, I think they are more likely Webworms. who knew of such things. They apparently don’t harm the trees, just make a mess to live in for the season, until they turn into moths.

Leo and his wife own the cute little motel, and he just opened up the door to a room, told us to relax and enjoy, stripped us of $80 USD and called us kids. I love him! The room was neat, clean, and well set up. There was even a little bowl of lollies (which I inhaled). Unfortunately there were no restaurants open, but we had food to cook, and then the Tides restaurant next door would be open for a hearty breakfast. This was heaven. A nice hot shower, fluffy towels, and comfy bed. We did our washing, and had a relaxing night.

Creekside Inn, old school so much, that they had a VHS and tapes to play. Not tonight, just washing and blogging and sleeping in.

Will tried his very best to get me up early (really Art, he did) but I am a bed loving stubborn thing, and slithered my way out around eight. Our washing was still not dry, so we decided to turn on the fan, go eat breakfast, then pack up. As we walked across the car park, Leo gave us a shout. “What happened to 6:30am?” I had visions of Art. Luckily, it was really foggy, with a nice dense smoky haze to go, so we made that our excuse. Nothing to do with me being a lazy bitch. Anyway, breakfast was great, and a constant flow of coffee, so after some good eggs, bacon and hash brown, I was good to go. Leo had given us the heads up about a good, quiet road, so that was our plan, and we stuck to it.

The fog started to clear, and the Hood Canal look pretty bloody nice. Apparently a good diving spot, good for fishing, clamming and of course oysters.

Davo GPS, was in a very argumentative mood, and spent the entire day beeping obscenities at us. We just ignored him, and even turned him off, and reset him a few times. It didn’t stop him beeping “make a U-turn” all day, so we shut him down. Leo’s advices was great, and just before Shelton, we turned off the 101, onto the 102. No more RV’s, log trucks and big pick up trucks. Also a good shoulder, and only a few annoying hills. It was a very nice ride, and we got right into it.

Everywhere we go, we see these signs for politicians trying to win a vote. It seems like they can just put them wherever they like. The happy cyclist enjoying the back roads of Washington State.

Leo had suggested for us to get to Brady, but I had done a little research, and aimed for Elma. It was 10kms shorter, and had a well recommended RV park, that catered well for cyclists. It also had a farmers market, on the way there. Cycling through these backroads, was great. This region is all about logging and tree farms, so there were a lot of these. Some Christmas tree farms, and, oh yeah, the Washington State Correctional facility. It was huge. Big signs telling us “No Parking” for the next mile, and “Do not pick up hitchhikers”. Right, no worries! 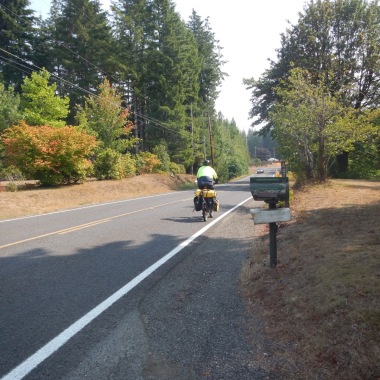 Keep up the snacks, you may not feel hungry, but you need lots of small meals when cycling, not just one or two big ones.

After a couple of stops for a stretch and some snacks, we rolled into Elma. It had been a pretty nice days ride, and we were tired but feeling good. A brief stock up at the farmers market, that had everything we needed, from beer and wine, to meat and fresh produce. Another 1.5kms, and we pulled into the RV park and found the office. Dennis  greeted us like long lost family, gave us a couple of home made cookies each, and proceeded to chat about cycling and the area he lives in, Elma! He cycles, and both the owners cycle, and they love cyclists. So Dennis took us over to the tent area, which was ….aaaaa…it was beautiful soft green grass….double aaaaa….it was right next to the amenities….and an added bonus, a special secret cupboard for you to charge up your gadgets. Oh my goodness, have you ever heard of such things? Only in my dreams. Heaven on a stick. We had beers, we had cookies, we had wine, and we had a bloody good night. Elma RV Park, you are an absolute winner.

Delicious oatmeal and raisin cookies, and also chocolate chip. Yum yum yum! Not quite as good as my mums Anzac cookies, or peanut brownies, but bloody good. What a great day!

2 thoughts on “We Fell Over and Landed in Clover”