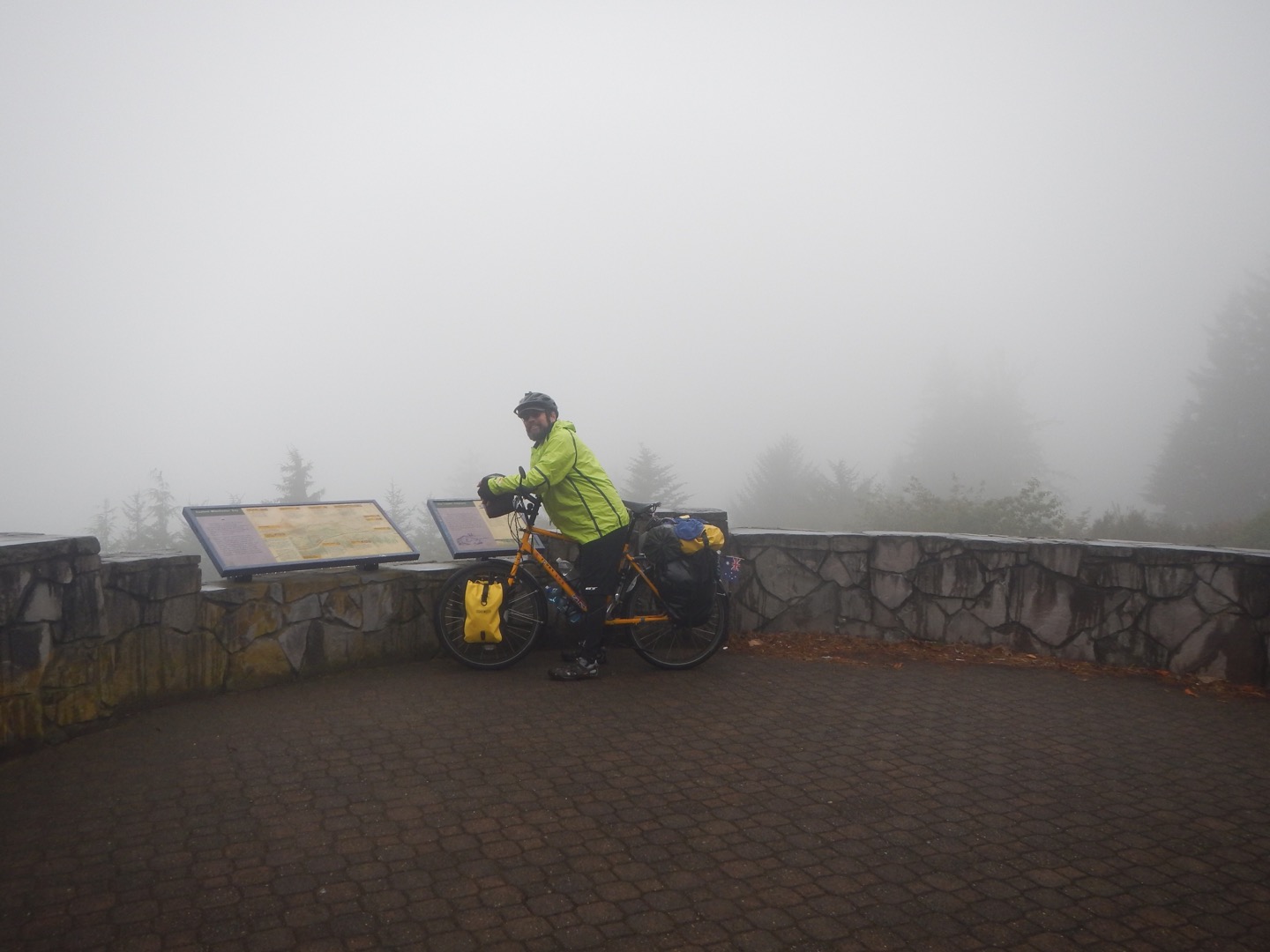 Boooop…….boooop………boooop! Every minute and a half. The bloody cute little lighthouse was going all night! It was raining, misty and foggy, when we got up, but in our sheltered spot, we didn’t get wet while we packed up. Down in the toilet valley, though, it was quite heavy. We took our time, waiting for the rain to ease up, and when it had, we started pedalling, carrying on up the rest of the hill out. As we went, the rain, which was really heavy mist, began to get serious. We’d only done about 1.5kms, and just pulled up under a huge Spruce tree, and just sat, and waited some more. It was really cold, and both of us had dug out the big guns. Our long cycling pants and rain jackets. This is not the summer I was looking for. 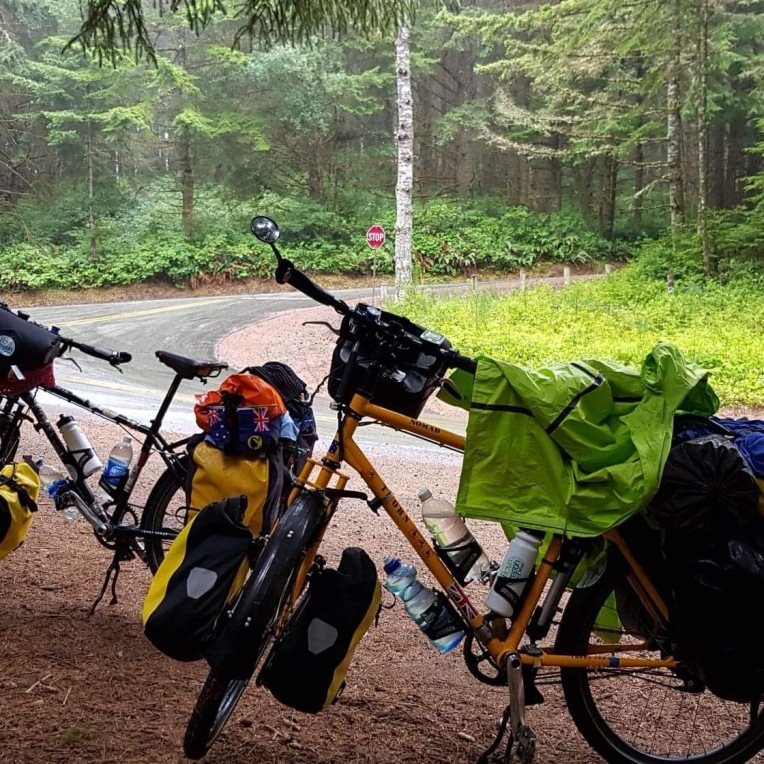 It’s not nice, but it is kinda spooky and cool too. Riding in the fog.

Around 11:30am, we were finally able to bust back out onto the 101, still going uphill, and make some real progress for the day. The road was wet, so on the downhill we were very cautious and reduced our speed. There were lots of trucks today, and we got sprayed a lot, with dirty water. That was unpleasant. The hills levelled out a bit, and we made pretty good time. All this water and cool air made us take a few more stops, one of which was a little roadhouse called Dune Heads, where we got a large hot coffee and a home made hot meatball roll. It was so good. Just what I needed to get warm.

Every time the trucks passed us, we got sprayed with filthy muck. Uggghh!

The rain had stopped and the road was drying out, and we were able to ride along pretty fast. The dunes are obviously a huge attraction here, with every vehicle towing or carrying ATV’s of every description. RV’s towing ATV’s, businesses that do ATV tours, with giant machines that carry 6-8 people. Not my thing.

Approaching North Bend and Coos Bay, the log trucks seemed to double in number, and speed, and we rounded a bend to be confronted with another massive bridge. This one had no shoulder, and we’d read that there was an ordinance in place making it against the law to slow down traffic on this bridge. It was recommended that cyclists dismount and walk the bridge on the footpath. It’s a long bridge. We’re not walking, and we’re not riding on the road. It was challenging , to say the least, to stay straight, and after my previous narrow path experiences, I wasn’t stopping either. Head up, eyes on the destination, just focus. Don’t look in the mirror, don’t look down, left or right, just look forward to where you want to go. I can see Will stopped ahead of me, to video, and I’m just thinking, he’d better get going, cause if I stop, I’m walking. He did, thank goodness, and we both made it safely to the other side. Phew, how much more of this stuff is there?

Same engineer for all these bridges. They are pretty good, but they obviously didn’t ride bikes.

Google maps and Davo weaved us through North Bend, to Coos Bay, and Big 5 outdoor store. We needed gas and sunscreen. It has been hard to find the right gas canisters for our Mighty Mo. That done, we followed the coast around, and found our way to Charleston, our last shopping opportunity, and picked up some last minute goodies for dinner, at Davey Jones Locker. It was a bit of a dodgey store, surprise, surprise, but we will be fed. Another five kilometres and we arrived at Sunset Bay State Park. A nice secluded little park, with a small hiker biker plot, and lots of amenity options a shortish walk away. 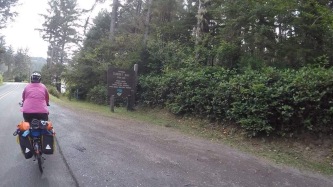 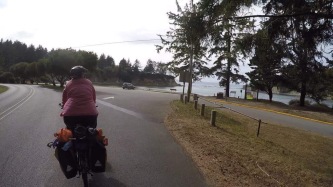 A nice ride to Sunset Bay, and a pretty Bay. There were even people swimming. It’s bloody cold you crazies. I’m about to light a fire.

There were no other cyclists there, just one little tent, that looked peculiar. We set up, and the owner of the tent arrived. John is a bit older than us, and tells us he is 6 years sober, and started to cycle tour 3 years ago. This is his third one, and lives in Florida. He is very animated, shares lots of his life story with us, and enjoys talking about the bikes and the equipment we have. We lit a fire, cooked some dinner, and just on dark, another cyclist arrived. It was Talan, one of the guys we’d met, way back in Fort Stevens. He is in his thirties, and has been riding from Alaska, heading for Bolivia. It was good to see him, and to hear what he’d been up to since we met. It was a cold night, and we all turned in pretty early.

Waking up to some blue sky and sunshine, was a treat. It was still a bit cool, but at least things were almost dry, and bright. Coffee and porridge, some more chatting, and Talan, Will and I headed out to check out the Sea lions and Seal a couple of miles further in, before heading back towards the proper route. It was pretty cool, although they were a bit far away, we also got to see a whale spouting and flipping us the fluke. It was great. 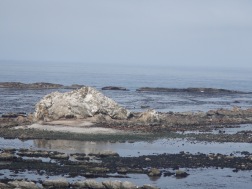 Simpson’s Reef, was pretty at low tide, and it was disappointing that the seals, and sea lions were so far away. But a beautiful spot. 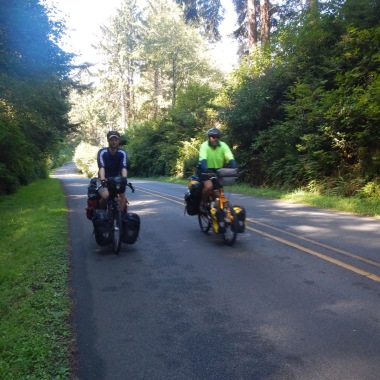 Talan is pretty loaded up, but he has no problem getting all this stuff where ever he wants. He’s on a massive one year adventure.

Unfortunately this campground meant we had to backtrack 5 miles, to Seven Devils road, which is a backroad recommended by the Pacific Coast Cycle Route, book. It’s less busy, and takes you through the tree farming areas of this region. As soon as we turned onto it, we were straight into climbing this steep hill. It was a no shoulder, twisty bugger, and steep as …plahh, phew, ugh! It flattened out so we could catch our breath, Talan carried on, we rested, then off again, up the next bit. This happened a few times, false summits. Just when you think you’ve beaten it, it turns a bend and starts to go up again. Once, twice, three times. Now we’re starting to understand what the seven devils are! This is not a nice road. This isn’t actually fun! It’s tiring and hard and annoying. At least the sun is shining, and the breeze is behind us, and it’s a short day.

About halfway along Seven Devils road, we spotted some people in the plantations, shooting off some ammo. It was a little intimidating, hearing gun shots and not being able to see where they are aiming. Got us moving a bit faster though. Finally after, like, forever, we came to a stop sign. Davo says right, the cycle route says left. Madame Google, What say you? She says it is uphill to the left, and downhill to the right. Cheers love, right it is! And we’re off! A deliciously speedy and twisty, car free roll down to The Whisky Run mountain bike trails, where we decide to take a break and have some lunch. It was a chance to get our wet gear out and dry it in the breezy sun, and enjoy the warmth. Until Diablo spotted some bears, and tried to attack them. Lucky for him they were Gummy bears.

A nice spot for a break, and help Diablo with his bear problem.

The last of our day was a nice light downhill pedal to our campground, with a nice hiker biker area, with a toilet close by (woo hoo), charging stations and food lockers. Talan was there, and just setting up. The town is about 2 miles further on, over another bridge with no shoulder or footpath. We all decided we’d get a taxi together, check out the old town, grab some fish and chips, then pick up some groceries on the way back. It was a good plan, and that is what we did. 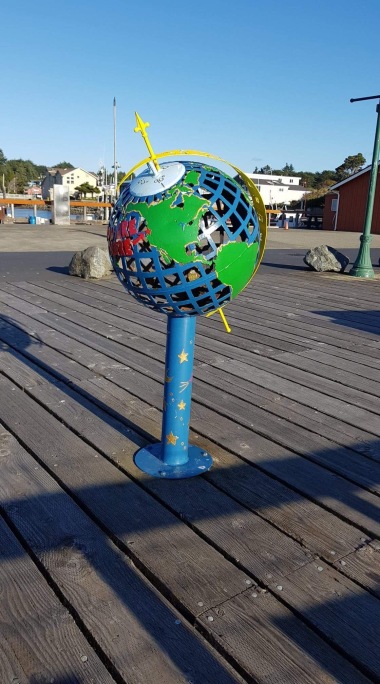 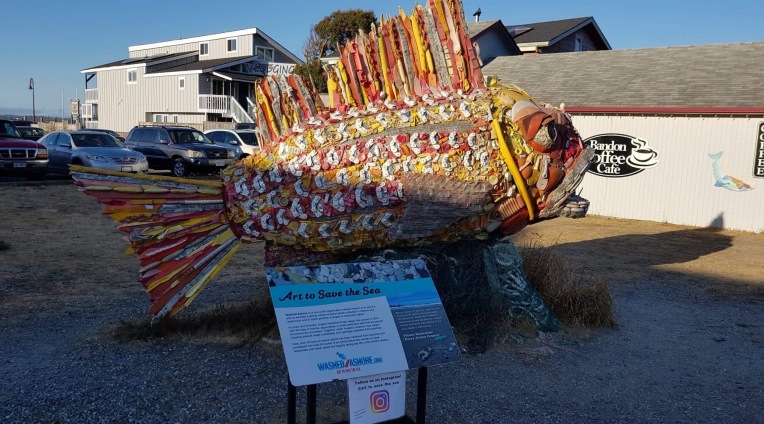 Lots of artwork around the old town, and they had a whole bunch of kids artwork cable tied to the ballastrades of the boardwalk. Looked great.

By the time we returned, with beer, wine and groceries, there were 7 more cyclists. One of which was German Dave, who we’d met at Cape Lookout. So we lit a fire, shared the beers with everybody, and enjoyed a great night of stories and route planning. Such an interesting way to meet people of all ages, nationalities and experience levels.

2 thoughts on “Foggy, Soggy and Scenic.”