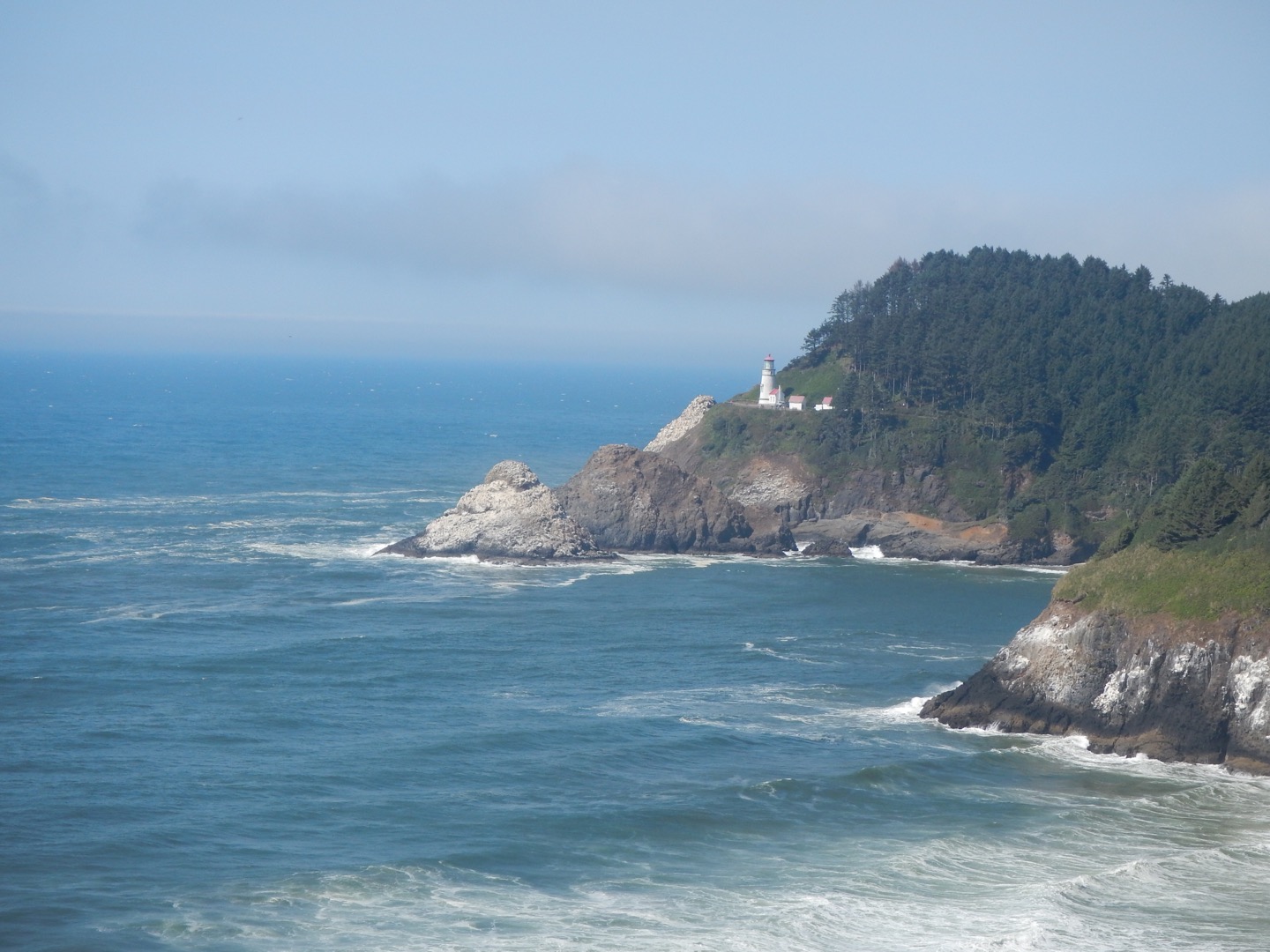 A restless night. Our youngest daughter is having some surgery, her first ever hospital visit, and we are not there to be with her. She has lots of other family support, a nice boyfriend and his family, but I am feeling scared and sad about being away for it. She was okay about it, but as we all know, when the day rolls around, you can feel very anxious and it is nice to have your loved ones close by. We spoke on Messenger, and sent lots of little messages, and Jake, her partner, has given me updates. So today might be just what I need to keep my mind off worrying. An 80km day to a State Park south of Florence. One big hill, and one crazy tunnel, so it should be okay. We managed an early start, with pancakes, fruit and coffee for breakfast, and a lovely chat with an elderly couple from Palm Springs, California. They were just lovely, and shared some funny stories with us. They were very encouraging and had visited Australia. They really loved it there, they said.

The sun was shining, and we had a bit of a tail wind, so the start of the ride was pretty nice. We stopped about 20kms along, for a coffee and snack break, and enjoyed the warmth of the sun. It was a lot of rolling dunes, and the road didn’t seem as busy here. It helped we had a good shoulder. There are lots of residences along this section, with small towns or villages in between. Billions of Antique and Nick Nack shops, and wood carvers too. 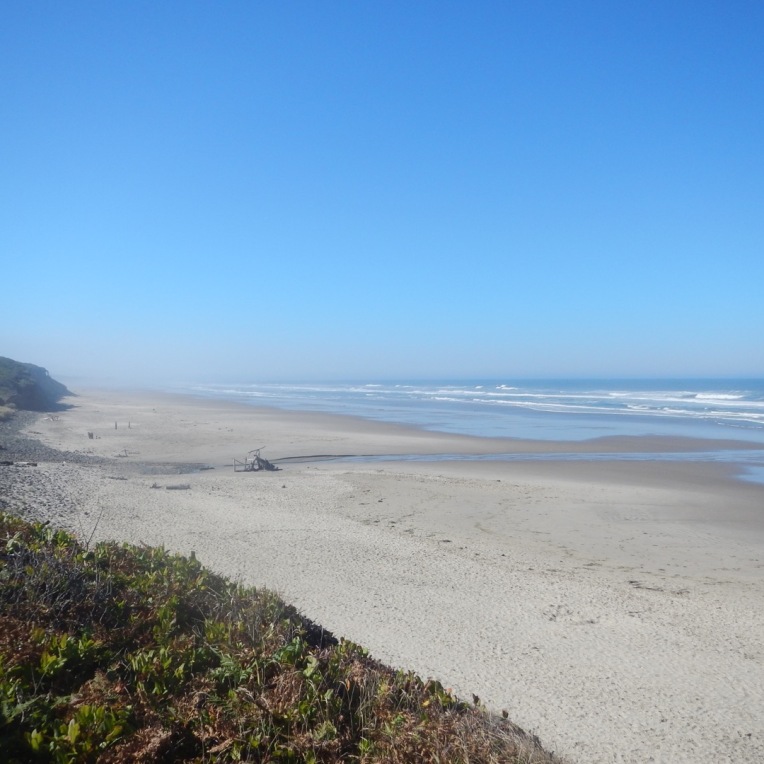 Lost Creek recreational area. Great spot for a coffee and a snack.

For our lunch stop, we stopped on the south side of Yachats, on the beach access road, where we found a table overlooking the river inlet. We put together some salami, cheese and tomato rolls, and enjoyed the views. As we rode off, we passed the blowholes, and even got sprayed with sea spray as we went by. The wind was picking up, in our favour, so let’s bugger off.

Yachats looked like another nice coastal holiday village, with some amazing oceanside blowholes. 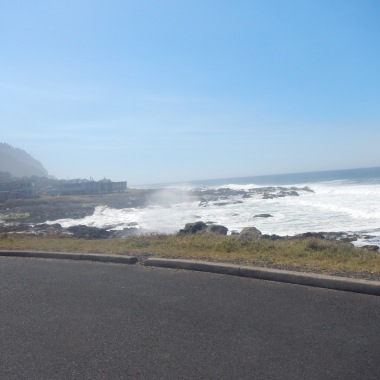 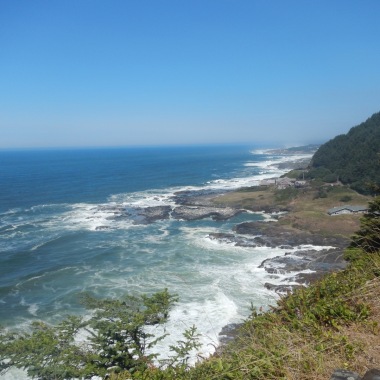 Stunning, isn’t it? This was low tide, it would be incredible at high tide.

The next bit was the climb over Heceta Heads, with the tunnel. So we just plodded along up and up and up. When we got to the tunnel, there was no footpath, and no shoulder. It was uphill, but not very long. We had to ride it. So we did. Will pressed the button, and I miss timed the situation and ended up in the lead. Oh bugger, pressure, the pressure. Head down and pedal like crazy. Don’t forget to breath, and don’t stop until the sun hits your back. Phew, we burst out the other side, and made our way up to a pull over area, to catch our breath. We could hear the noisy old sea dogs barking from below, so we sat on the wall, in the sun, had a snack, and watched the sea lions playing in the surf and sleeping on the rocks.

Again, the scenery was amazing today, and we enjoyed even the uphill climb, because of it. This is what people have been talking about. Spectacular cliffs, forest, beaches, and the rocky haystack formations. With about 20 more kilometres to go, we flew down the other side of Heceta Heads, missing a couple of good photo ops of the beaches, but enjoying the speed. More of the rolling hills through the Siuslaw National Forest, and we were starting to flag a bit. It was getting close to 4pm, and we spotted a State Park, half a mile on. Yep, let’s just call it a day here. No showers, but a nice spot, and we can have a fire. So we found a spot, got set up, and relaxed. It was another good day, with plenty to see, and we only fell short 15kms, of our goal. Doesn’t matter.

A beautiful day, with time for a mindful Mandala for my daughter Olivia, hoping her surgery went well.

This misty foggy shit is starting to piss me off. I can’t get my clothes dry, and it is not comfortable starting the day in damp, cold clothes. The tent gets packed wet, and even if I hang stuff off the back of the bike while I ride, it is not getting dry. We need to get to where it is warm again. But it is a very nice spot here, and we did have a nice night. Toddling off at a reasonable time, it was cool and overcast. About 3 kilometres down the road, is Darlingtonia State Park, and Will had read that there was a natural garden of Pitcher Plants there, so we wanted to check it out. If we’d gone our full distance yesterday, we would have missed it, as he only read about it last night. Very, cool little place, literally just off the highway, and about 200 meters into the forest. 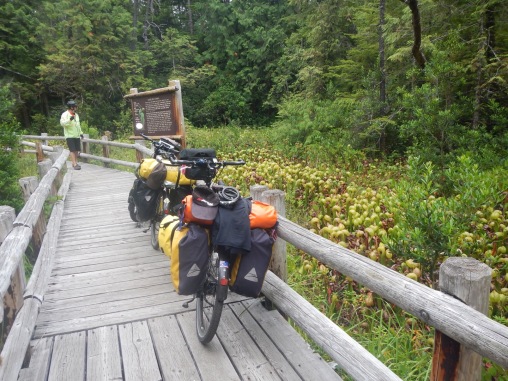 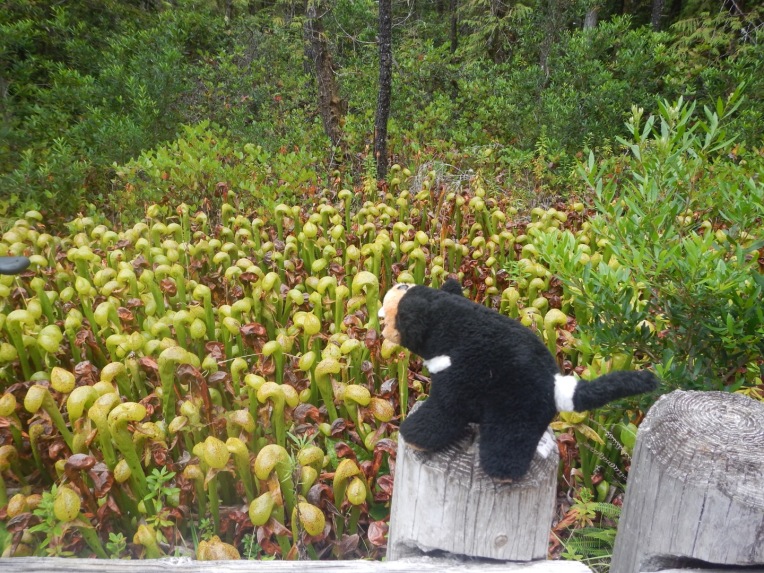 Don’t fall in there Diablo, those things look pretty, but they’ll eat you alive.

A great little stop, and then we were off again, on the roller coaster ride, that is the 101. Before too long, we rolled into Florence, and stopped for second breakfast at The Brown Hen. I had to try the traditional Biscuits and Gravy, with bacon, of course. I can say, that it was nice going down, but not the right choice for riding up and down hills for the next hour. Lesson learned there. From Florence, we roller coaster along, passed some beautiful lakes, nice forested areas, and we started to see the famous dunes appearing right against the highway. 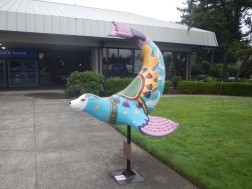 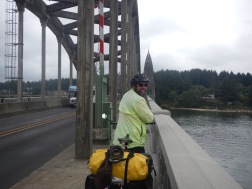 Florence was a strange little place, another groovy bridge, where we stopped to see the first dunes, and a sneaky Harbor Seal, who just popped up. That little white splodge in the bottom picture.

Clear Lake, it was a big lake. Another cool carving, and the dunes meet the road.

It was a cold day, reaching only 15C, and by the time we reached Reedsport, it was feeling every bit like winter. Another grocery shopping adventure, with Will doing the purchasing, while I did the guard duty. Lots of friendly locals were curious about the bikes and where we had come from, and we always do our best to happily answer their questions. It is funny how many of them think we are from Canada, because we started this ride in Calgary. Nah, mate, we’re Aussies, mate!

Old Davo wanted us to ride up the big steep 101 hill to the campground, which was 1km shorter, but Madame Google suggested we take the scenic route around the bay, for a less severe climb. You win Madame, sounds fair. Well, it is still open for debate about which would have been better, as the long way was less steep overall, but had a couple of super steep, but short jump ups, that we only just managed. Hooley Dooley, we were glad to get to the top of the last one. A very nice campground, in the forest, and the hiker biker spot was under the shelter of some pretty big trees. Then comes the kicker, the toilets and showers, are at the very bottom of the steep windy hill. Aaaaggghhhh! Come On! Bloody hell, you don’t make things easy for us to do the righty, hey? So off I go, after dinner, to shower and toilet, cause I’m not doing this walk of pain again today. If things get desperate in the night, there are plenty of trees…..