Up and getting it together. Today was important. The Motorhome of Madness was due in LA before 11am, or huge fees would ensue. We’re not having that, so we were up, bed stripped, bags packed and everything returned to it’s original state, in no time. Nuts and berries mooshed and swallowed, one coffee only! Lastly, we had to dump the Black (ooooo, yuk!) and Grey water, and flush the tanks. The RV park, dodgie as I said, didn’t really have a good connection for us, so we had to do a bit of a manoeuvre to get it done, but we’re not paying extra, it’s getting done. We had about 88kms to drive, get fuel, and departure needed to be by 9am at the latest. Done! Good work, team Wiljen.

No photos taken, this is serious shit! Driving a mega vehicle on the interstates, getting through the clover leaf style road systems without a wrong exit, takes great concentration and communication. We got this shit!  So with me and Madame Google navigating, and Will in truck driver mode, we smashed it into the busy traffic. The first half was easy, hanging out on the I15, then we exited onto the 210, then the 605. It looked pretty easy on the screen, but in real life it was pretty darn stressful, especially with a deadline.

As it happened, we did super. We rolled in, fuel tanks loaded, shit tanks empty, with 15 minutes to spare. Phew, high fives, and take a few deep breaths. The Motorhome of Madness is safely back in the hands of El Monte RV Sales and Rental. After a tense few moments, while the vehicle is inspected and mileage recorded, the lady gives us the nod. It’s all good folks, and just unpack and piss off! No really, she was really nice, and wished us luck cycling through LA, as “ nobody cycles in LA”.

I went inside to finalise our deal, and then we could head off to our hotel, back on the bikes again. It felt really good to be riding again. I enjoyed the sights, and the comforts of the RV, but it was kind of boring just being a passenger. As we rode out of the driveway, we noticed another El Monte RV, parked in the emergency lane of the 605, opposite the spot where it should be. Uh oh, they turned left a smidge too early. Well, just reroute guys, and keep going, no good just sitting there like stunned mullets. Glad we didn’t do that!

We’re good to go Will, so let’s roll!

The ride to our cheapy hotel, was simple and short. Too short, as the room wasn’t ready yet. The nice Indian man directed us to a good pub, 600 meters down the road, for a few beers and some lunch. Great choice, as when we got there, a vibrant, smiling local burst out, excited to see fellow cyclists arrive. Eugene was returning from a morning ride, and stopped for a quick beer and lunch, which turned out brilliant for us. We sat and enjoyed a good chin wag with him, and ended up organising a ride together for tomorrow. What a bloody nice guy. He told us he worked for Boeing, and on the Space Shuttle projects. Wow, that is awesome. So we had food, beers, good conversations, and returned to our little hotel. Unfortunately the ground floor rooms were all “smoking” rooms (who does that these days?). We didn’t feel like dragging our bikes and gear up the stairs, so just suffered the room. It was large and a bit stinky, but bearable, just.

In the morning, we woke up feeling happy and keen for a ride around LA. Breakfast was included in our room, so we toddled off to reception, for our “continental “ breakie. Hmm, can’t see much, just two types of cereal, cornflakes and sultana bran. Coffee, and, well, nothing else. Really? Guys, come on! Oh yeah, there is donuts. Not really what I call breakfast, but better than a slap in the belly with a cold fish, as my Dad used to say. Only just.

Eugene arrived right on time, and we took our unloaded kids for a whirl. In LA, there are these rivers, well creeks, well actually they are kind of like drainage systems, and they have made cycle paths along them. They are off the roads, wide, and quite enjoyable to cycle on. So Eugene took us on the San Gabriel Trail, all the way to Seal Beach, which was a great ride. Against the wind on the way there, and past some interesting areas. 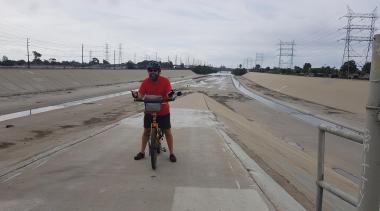 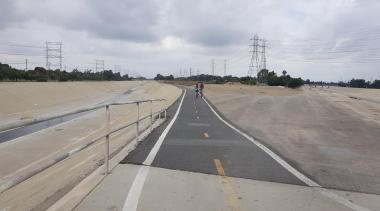 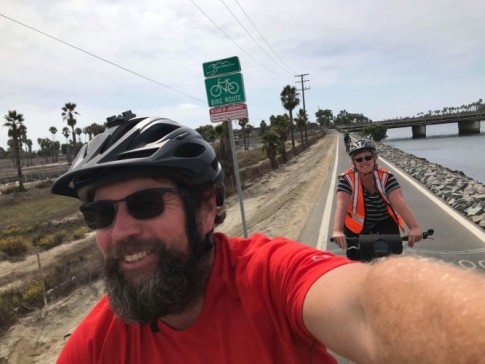 Ridin* along these drains just reminded me of the Terminator movies, or The Fast and the Furious. Something exciting will happen, any second.

Once at Seal Beach, we took a stroll down the Main Street, then had a bite to eat at a burger and brew place, before hitting the return trail, with the wind behind us, all the way home. It was a great 38 km ride, and something we may not have found on our own. Before leaving us to have a rest, Eugene informed us that his son Jonathan, had got some tickets to a preseason basketball game, between the LA Lakers, and the LA Clippers, and would we like to go? Oh hell yes, why not, we wouldn’t have got to do that otherwise. Wow, this is awesome.

So Eugene, his wife Imelda, and his son Jonathan, came and picked us up, shouted us to a great sporting spectacle, and then took us out for dinner, before leaving us to contemplate, what just happened to us. What an amazing bunch of beautiful people. I think we might owe something into the karma bank now. It took us a while to get to sleep, just thinking how lucky we have been this trip. 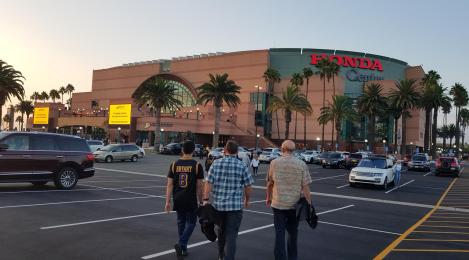 Even though it was only preseason, it was serious. Young up and coming players trying to secure a start, and teams working out new plays. It was a fun night. The Lakers lost, but they have some good young talent.

Feeling a bit sluggish, and tired, we got up, ate our own nuts and berries, drank the hotels coffee, and packed the bikes. Just as we were ready to leave, Eugene rolled in, ready to show us a different trail out of here. Was he just making sure these crazy Aussies got out of town, or did he like any excuse for a ride? I think the latter! So he took us to The Coyote Creek Trail, which met up with the San Gabriel Trail, which finished at Seal Beach. From there, we rode the PCH (Pacific Coast Highway) until Bolca Chica, where we got on a beachside cycle and pedestrian path. It was bliss! Not too many people walking it, and the beach views were fantastic. We did have a slight headwind, but we made good time anyway.

Slower for many reasons, but Eugene wasn’t bothered. It was great just riding and chatting, and enjoying the sights. 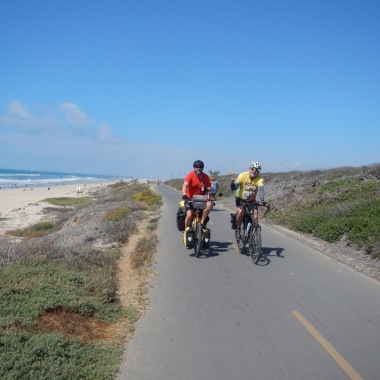 Plenty of speed demons out on a Sunday, but great we can all share the path.

By the time we got to Newport, it was lunch time, and Will and I were ready for something more substantial. Eugene, didn’t want food, he was turning around and riding the tail winds home from here. Well, thanks mate, for an absolutely amazing couple of days in LA. Great guy, great family, great experience! Wow! So we waved him off, and kept on riding the PCH, through to Corona Del Mar, where we did a bit of grocery shopping and had a quick sandwich. We weren’t too far from our end point, of Crystal Cove Campground, so pushed on. We were amazed at the number of fancy, expensive cars we were seeing. Ferrari, Lamborghini, Maserati, Ferrari, Ferrari, blah, blah, blah! All just revving the motors, blasting up and down the PCH. Just don’t hit one of those and we’ll be alright. Arriving at the campground, we felt pretty good for our first day back riding, until the ranger told us, $55 for a site! US dollars, that’s about $70AUD to pitch our tent on the cliff, and then pay a dollar for a shower. Fuck off, I say, fuck off! Luckily, Will had been to the Barber, and I didn’t say those last sentences out loud, and they must of felt sorry for us. They ended up charging us $25. I guess that is okay.

Well, you made our LA adventure amazing Eugene, thank you and see you again. We are on our own again, and checking out the unusual and individual.

Well, we had a nice night, watching the billion dollar cars race up and down, and the sun setting in the Pacific. We even saw the Falcon 9 rocket, from Space X, launch. We didn’t realise what it was at the time, but Eugene posted it on Facebook, and we recognised it, as what we’d been joking was a UFO. Way cool! 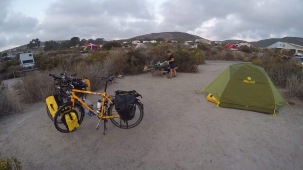 Crystal Cove was a nice spot, and seeing a rocket was freaking cool!

Another unusual and interesting day in the American adventures of team Wiljen.