It was a warm night, and we both slept a bit restlessly, but the morning was still and beautiful. While we ate our cereal, we watched some dolphins cruising north in close to the shore. It was a good camp. A bit of neighbourly chit chat, and we headed off, feeling the warmth of the day already. We’re back on the PCH, all the way through Laguna Beach to Dana Point, and it was busy. Not to mention lots of up and down. There is a lot of money here, with huge houses enclosed in gated communities, and so many fancy cars.

The beaches are getting better and better, and everybody is out enjoying them. Just after Dana Point, we were on a dedicated cycle path, away from traffic, and we really enjoyed a few quiet miles. This took us through to San Clemente, where we got a little confused with the route. A speedy road cyclist, who’d passed us earlier, was heading back where we had come from. I shouted out to him about which way to go, so he pulled over and we chatted about the best way to go. Gus rides around here a lot, he’s from Columbia, and was so happy to talk with us, he gave us his phone number, and texted us later in the day. His advice was good, and we found our way through San Clemente’s and along the bluff, mostly on the old highway, well away from the busy PCH. 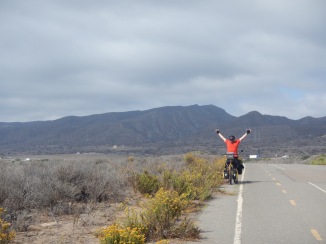 Through San Clemente, we found the Old Coast Highway, which has been converted into a cycle path. There were sections you could still drive on, as it ran along the coastal bluff, and there were camping areas along most of it too.

Eventually, the route took us through Camp Pendleton, a large Marine Corp Base. Some reports had said that we wouldn’t be able to ride through, since the events of Nine Eleven, they had really tightened up the security. Other reports said we could ride through with photo ID. we hoped we could get through, as the other option would be the super busy PCH.

What we found was, that they asked for ID, but really paid little attention to it, while they chatted to us about Australia and then just brushed over us. We were very relieved, and it was interesting riding through, basically a small village, with schools, shops and housing. Not to mention the lack of traffic.

The day was getting on, and we were getting tired. A bit of a headwind was developing, and when we finally rolled into Oceanside, we were bloody happy. It is a military town, for sure, but also has a lot for tourists. Nice beaches, and plenty of hotels to choose from. We found ourselves a neat little Micro Brewery, and enjoyed a boutique beer, while investigating hotels. Tap 101, had some very interesting and delicious beers, good Wifi, and good staff. Hence, we had a couple more than we planned, and had to cut ourselves off before things got out of hand. We’d decided to book a room at the nearby Motel 6, which is a motel chain Will’s Mum had suggested many times.

Motel 6 is a budget brand, and the price was right. The room was big, and on the second floor. We had to lift our bikes up two short flights of stairs, and walk along the balconies to get the kids safely off the streets, and secure over night. I can say, that the room was a bit grubby, a couple of ciggy burns on the bedspread, and no tea or coffee making facilities. Hmmm, could be better. The good news, was that we could wash some clothes in the bath, make ourselves a ham and salad roll for dinner, and use their pretty decent Wifi. It was a good night.

Our last day on the Pacific Coast Cycle Route, and we were both feeling excited and amazed. We smashed down the last of our granola, and wrestled the bikes back down the stairs and onto the road to San Diego. We hadn’t had a coffee, so while we made our way along the beachside pathway, we kept our eyes peeled for a chance. Bingo, a little one man band, right on the beach front.

It was a bit cool and overcast, but due to a hurricane off of Baja, there were some great waves, and lots of surfers out enjoying them.

After our coffee, we got pedalling, and followed the Adventure Cyclist America map route, which had us on bike paths and wide bike lanes all the way to Del Mar. We rode along the coast, watching the billions of surfers and sun lovers out enjoying the beaches. The riding was great, and we found ourselves a table and bench, on the grass, near the beach, and made ourselves some lunch. It was tough to get moving again, we could have just sat there and watched the dolphins and surfers, oh and a cheeky seal loving himself sick in the wash. 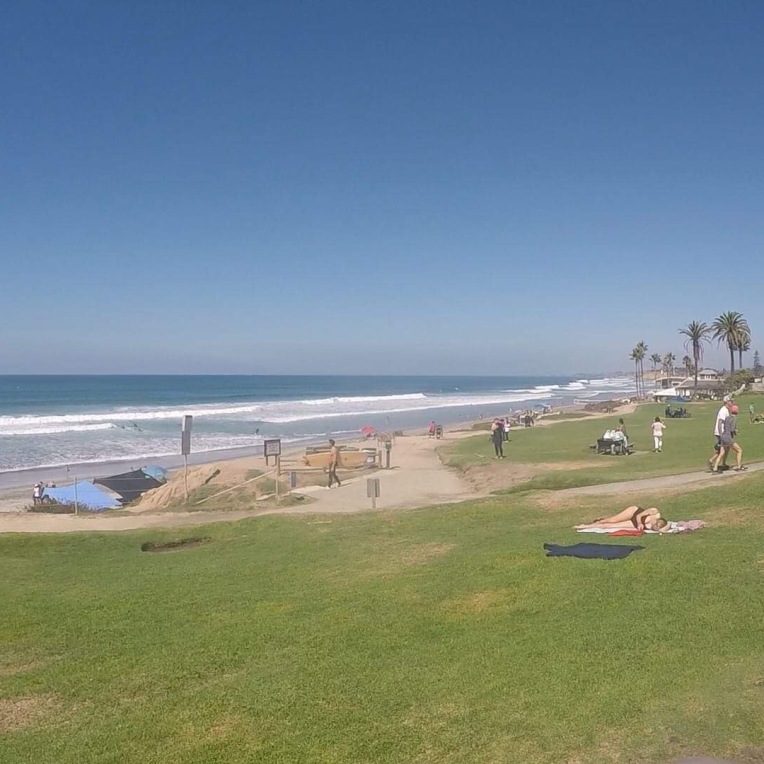 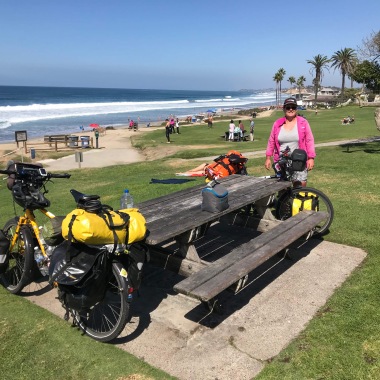 Del Mar was very nice. It’s lucky we had made a booking in San Diego, or we might have just sat here all day.

But this isn’t getting us to San Diego, so let’s go. We’ve got a bloody hill to climb. Torrey Pines, has a world famous golf course (apparently the one Tiger Woods plays at), and a wildlife reserve, all on top of a big hill. So up we go. They’ve given us a double lane cycle path, all the way up it, so we can just spin away until we get to the top in our own time. No pressure. Just a lot of sweat. It was pretty hot. Looking at the route, we are almost on the edge of San Diego, and we continued to follow the route, mainly on roads, along the bluffs of the coast, and around La Jolla (a very nice area, and affluent). From here, it was pretty stressful, as we are hitting the city outskirts proper. The traffic increased, we still had our own lane, mostly, but navigating was tricky. Some how, we managed to get ourselves onto The Spanish Landing Trail, a pedestrian and cycling path along the bay, into Downtown. Phew, we can relax a little. 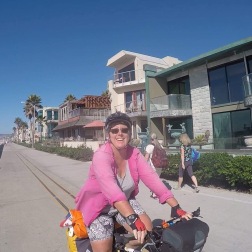 Around La Jolla and Mission Bay, we enjoyed the beach path, even though we had to take it slow, and avoid pedestrians and electric scooters.

We slowed up a bit, and relaxed enough to coast along and enjoy the view of the city. San Diego is smaller than Perth, is on the same latitude, and has a similar climate. It felt a bit like home. Our accommodations while we are here, are at a Hostel in Little Italy. It was not far now, and we slogged our way to it, while Davo and Madame Google argued on the directions. Bugger them, we got this. Lots of one way streets, which made it a bit tricky, but on a bike, it’s easy to just get on the footpath and go where you need. We’re here! We made it!