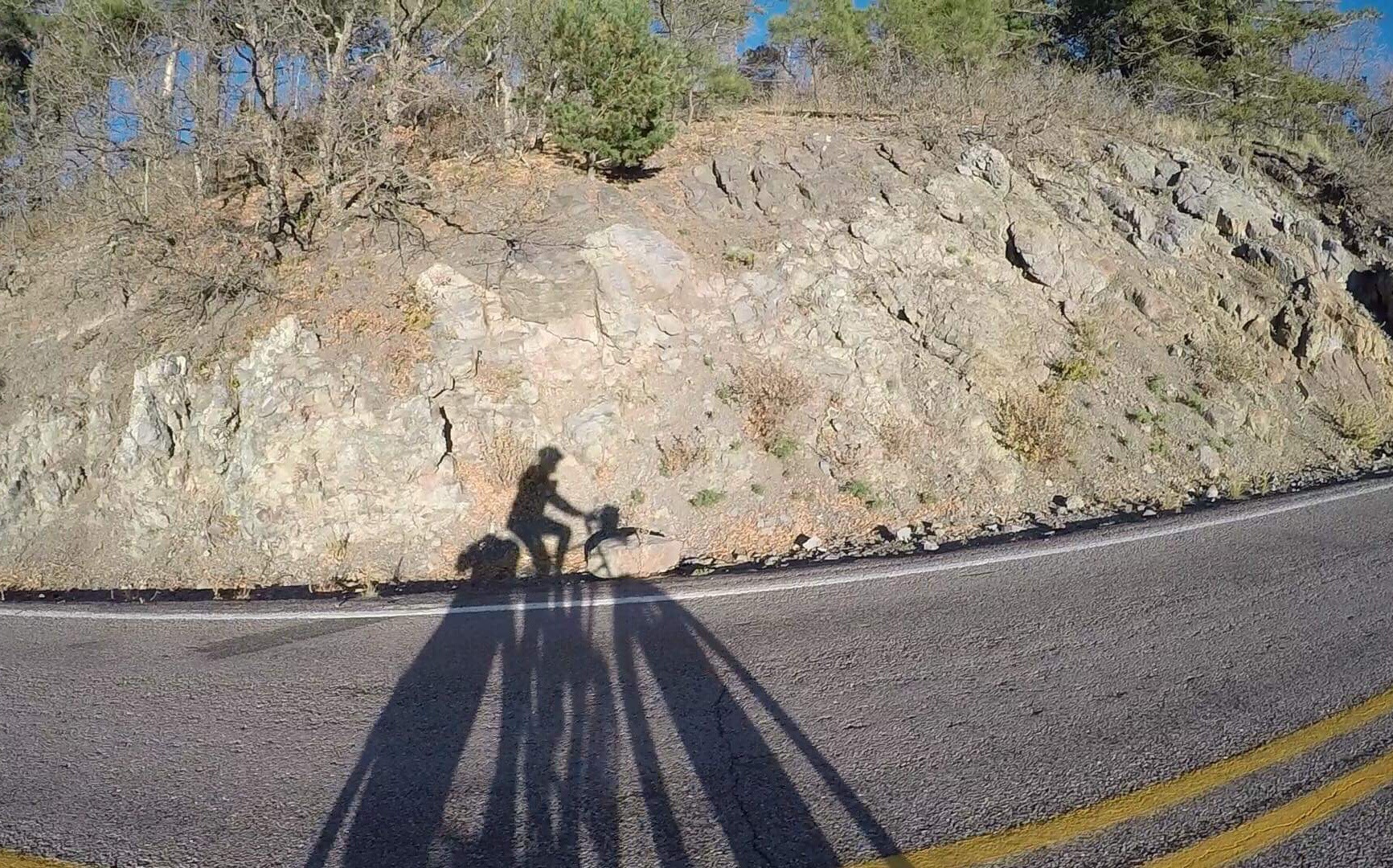 An early start for a long day is needed today. It all started okay, but our complimentary breakfast was not ready. Poor Rose, the manager, had slept in. I totally sympathise with her. This set us back a little, then we sat at a table with an older couple, and ended up chatting to Greg and Marie for too long. Worth it, they were super lovely.

The kids were waiting for us at the bottom of the stairs, sick of being locked away in the dark store room.

Enough procrastinating, there is no way to avoid it, we have to get going. We rolled out, in our cold weather gear, it was a bit nippy, and going to get colder by the end of the ride. Getting out of town wasn’t difficult, but the hills started right away. Rolling hills to begin with, going passed the Chino, Santa Rita mine. Another enormous copper mine. We took a short break from the constant hills. 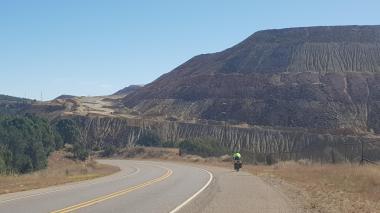 They definitely do things big in the States, including their copper mines.

On the 152 highway, we kept going up, and then we had a run downhill near San Lorenzo. It was one of the very rare times I am not happy to race along without pedalling. We’re just going to have to do that work all over again, and some. Ugh! Lunch time was already on us, so before we started up the hardest part, we sat and ate well.

Our day consisted of 66kms to 8228 feet, at Emory pass, then a 28km downhill run to Hillsboro. The 66kms up, were slow, tiring, and some of the toughest riding I have ever done. Just a constant slog in 1st, 2nd or 3rd gear, absolutely smashing it at 5-8kms an hour. Any little decline, was so appreciated, and hated at the same time. Short breaks got closer and closer together, and we were taking too long. 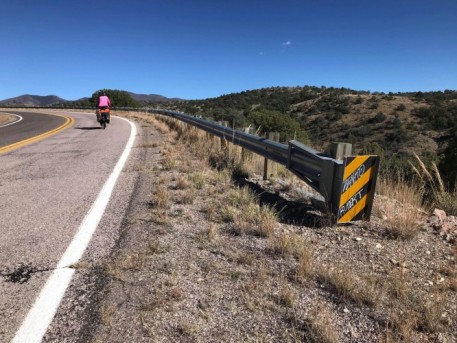 Going up ever so slowly, the vegetation slowly changed too. No more cactus, and grasses, now trees and rocks. Also a lovely stream, bubbling in the other direction.

Along the way, we saw many hunters, looking for deer. It seemed a bit strange, driving slowly up the Gila mountain range, hoping to spot a deer, then pull over to shoot it. Not long after we’d seen a pickup with a couple of guys we’d seen before, we spotted a deer in the bush. We tried to shoo it away by making lots of noise and telling it to run. They are super cute. Meanwhile, we slogged away in granny gear, zig zagging our way slowly up.

Now I’m really having trouble. My legs are tiring, hurting, and it is getting hard to breath. I’m counting the inhale, I’m counting the exhale, I’m trying to stay calm and just keep pedalling. I’m stopping almost every kilometre, then every 500 meters. Will is incredible. He’s suffering too, but just keeps plugging away. There are a few camping grounds on the way up, but we are so close to the top, I just want this climb to be done, I don’t want to do it again tomorrow. At some point, I tell him to just keep going, don’t worry about me, I just need to stop a bit more often. It’s getting late, it’s getting cold, and we are almost there.  Next minute, I see “2km to Summit” written on the shoulder. WHAT??? No fucking way! I almost cried, but just kept pushing. All of a sudden, I saw the sign for the summit, and pushed a bit harder. There was Will, just waiting for me, and as I rolled to a stop, I just lost my self control, and had a good old relief cry. So exhausted and so absolutely happy the climbing was finally over. 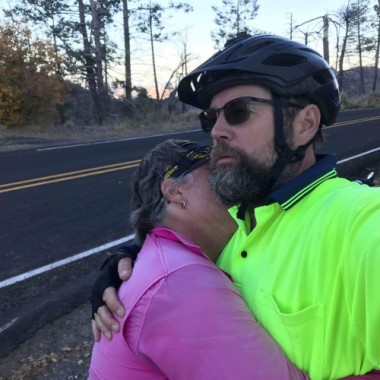 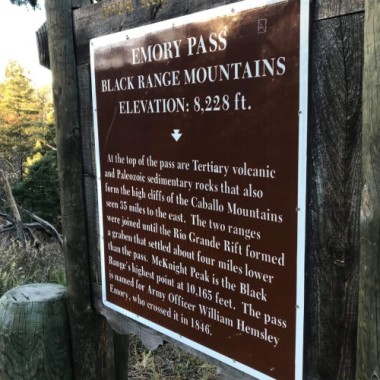 I know I don’t look happy, and I wasn’t. I was satisfied that I’d ridden over that pass, all the way, and could still breathe and stand up. The emotions and exhaustion were a bit much for this big girls blouse.

Once I got my shit back together, we prepared ourselves for a very cold and fast downhill run to Hillsboro. My fingers were crossed that the information was right, and it was ALL downhill. It was! We used the entire lane all the way down, zooming around the switchbacks, and pedalling on any flatter sections. We were very lucky that only two cars passed us, so we could go as fast as safely possible. No deer, until we reached the outskirts of town, and by the time we got to town, the sun was well and truly down. 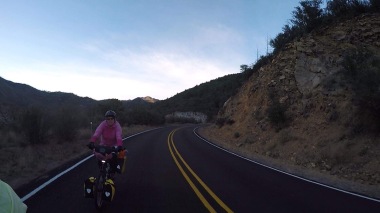 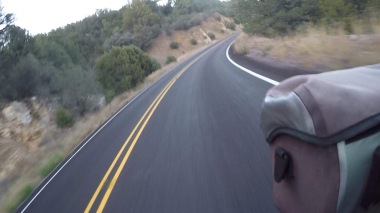 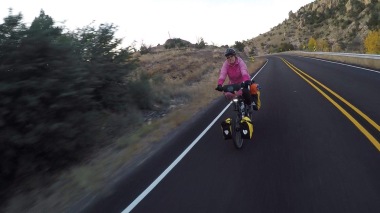 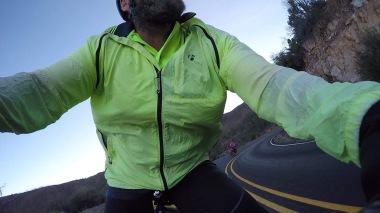 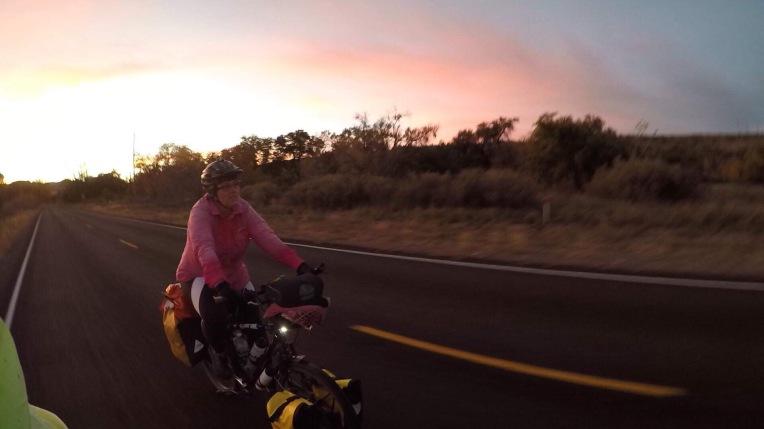 Not one for braking on a solid downhill run, but I did restrain old Betty a fair bit. We need to get there in one piece, we’re tired and it’s getting dark. Will wasn’t too stressed, he did it one handed, while taking some GoPro footage. Bloody maniac!

We located the motel, but couldn’t locate the manager, so knocked on the neighbours door. The lovely local lady suggested we go to the B&B, and talk to Maree. We did that, and were just lucky that there was a room. Maree treated us like she’d known us forever, showed us to our room, and went back to her night. We got lucky, we broke one of our biggest rules, and rode too late. But it is done, and we are safe and warm, and completely exhausted. Cheese, salami, crackers and fruit for dinner, a beautiful hot shower, and I was out like a light. Done!

As I opened my eyes, I was testing the body to see how I was feeling after yesterday. Not as bad as I thought I’d be. We went on down for breakfast, and enjoyed a fantastic breakfast soufflé, coffee and juice. Wow, that is just what I needed. Maree is a lovely lady, caring for her 104 year old mum, running the B&B, and volunteer fire fighter. The home was warm and welcoming, and we enjoyed a chat with Maree before getting ourselves moving. 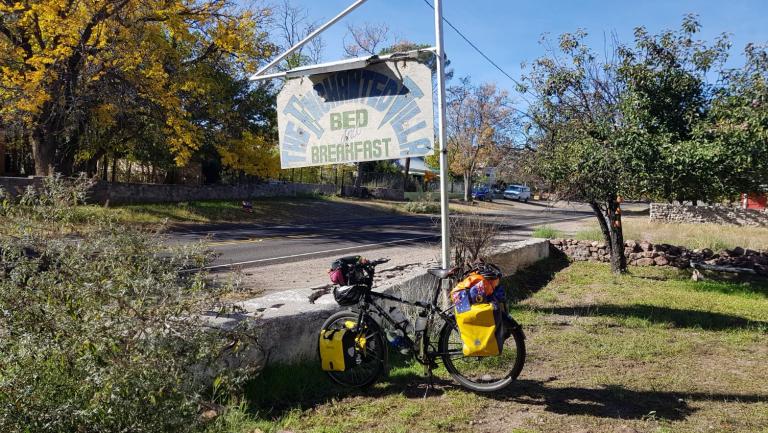 Hillsboro is a quiet little hill town, if a little run down. Just like many we have seen so far. Just one small climb to get out of town, 3kms long, and then a steady run down to the valley, where we cruised along well over 20kms/hr. We stopped at the RV park, at the intersection of the 152, and the 187, and had a sandwich and a cold drink. A nice little break, before carrying on southward. Riding past Caballo Reservoir, there were a couple of state parks for camping, or a few RV parks. We were going pretty well, so continued on the downhill rollercoaster, with an increasing crosswind. 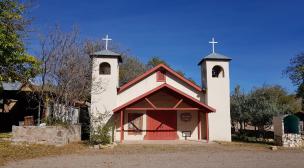 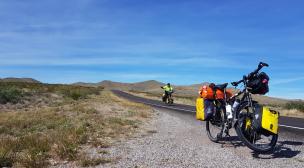 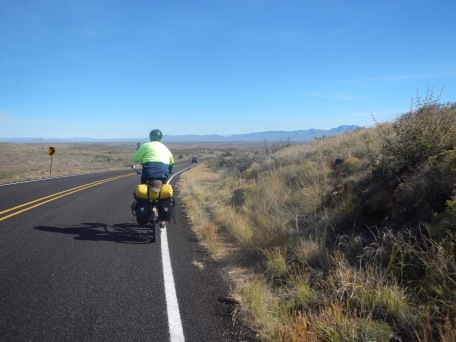 Some lovely old buildings in town, including this cute little church. After smashing the little hill, we enjoyed the rolling hills for a while. 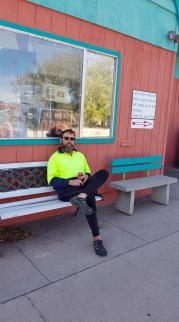 A short break, and a cold drink to get us through the day. Not many other opportunities coming up today.

Entering the Hatch valley, which runs from Arrey to just south of Hatch, we started to see and smell the millions of chilli plants. Miles and miles of them. The Hatch region produces between 50 and 70 million pounds of chilli a year, and is most famous for the Hatch Green Chillis. Way back in Washington State, with Mike and Pat, we experienced them, and whooo, they can be stinkers. The Hatch Valley also grows onions, pecans, alfalfa, lettuce, cabbage, sweet potatoes, wheat, cotton, and various experimental crops. We saw plenty of cotton, and started to see many groves of Pecan trees. 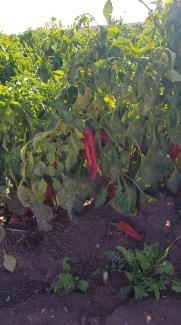 Renowned for Green chilli, we haven’t seen any of those, but fields upon fields of red ones. We even saw some drying on a roof top.

Our destination was Hatch, which had just one Motel, and The Famous Sparky’s. By the time we got there, the wind had really picked up, so we decided to have an early dinner, late lunch, and try the famous Green chilli, cheese burger. Homemade patty, famous green chillis, how bad could this be? Well, we both agreed that it definitely was the best burger we’d had on this trip. Very good. While there, we rang the motel, to see if they had rooms available, as they didn’t have a website, or use online booking systems. They “had empties”, so I said we’d be right down. 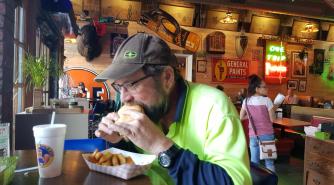 If you go through Hatch, you won’t be able to miss Sparky’s, due to all the crazy statues, and memorabilia around it. Or the smell of the grill. I would suggest you get yourself a burger, it is worth it.

Ten minutes later, we were at the motel, reading the sign that told us to ring the number to check in. Didn’t we just do that? So I ring again, and Sergio, tells me, he’ll just ring his son, who is down there. Here? There’s no one here. So we wait, in the wind. Ten minutes later, a young guy in a flash pickup truck, pulls in, opens one of the rooms, then says hello to us. Takes Will’s money, says have a good night, a buggers off. Okay then. Yep, this is definitely a fleabag motel. Let’s just hope we don’t get fleas from it.