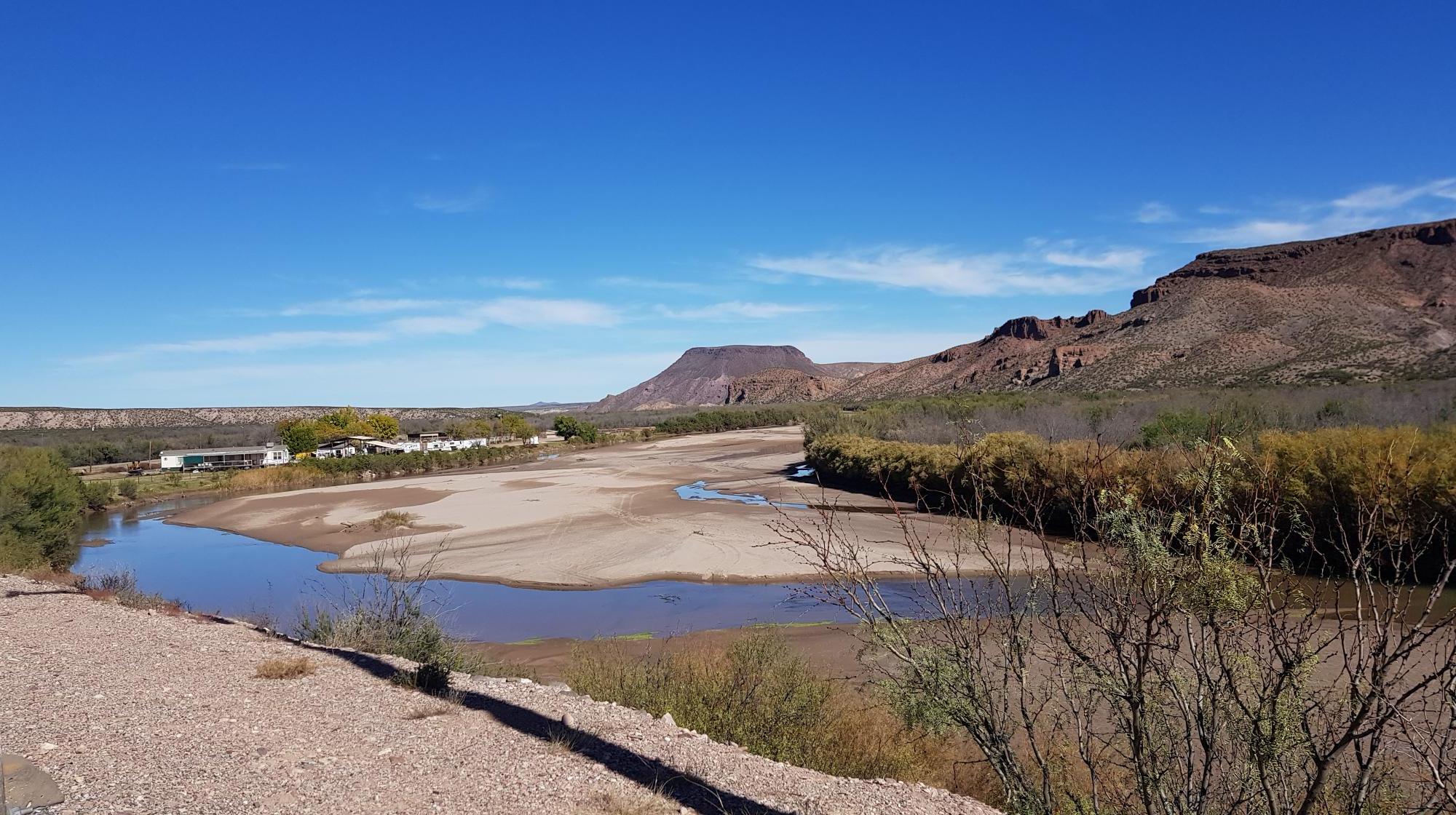 Up and out of the old fleabag motel, in record time. It was a bit shit, with the smoke alarm beeping regularly, due to old battery. Will tried to remove it, but it was a sealed system, so he yanked it out, wrapped it in a towel, and shoved it in a draw. We had a pretty good sleep.

The day looked beautiful, and we started with minimal wind. It was more of the chilli fields, cotton crops, and pecan groves. A good shoulder, and a quiet road, we had a pretty nice ride today.

Chillies and pecans, all they need now are cocoa beans, and they could make something delicious.

We stopped in Radium Springs for lunch, where we found the Leasburg State Park. It was closed, but that didn’t stop us from sneaking around the barrier, and enjoying their facilities in peace and quiet. 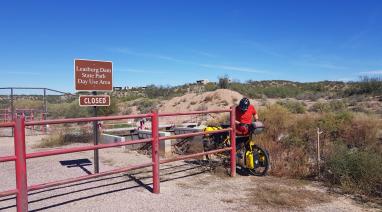 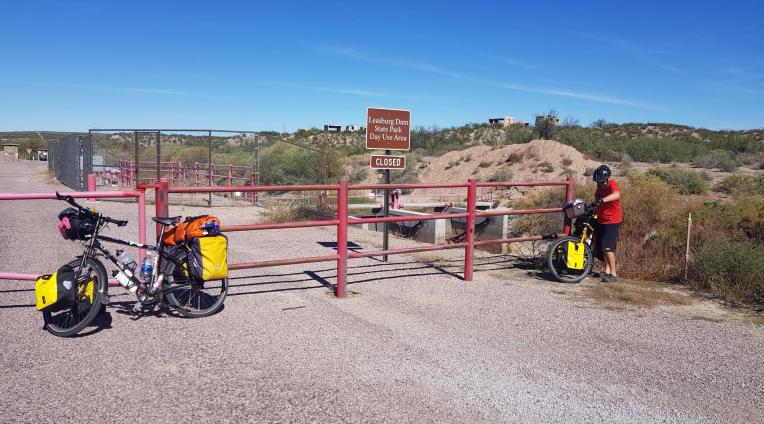 Sneaking out, and checking for double gees. We both had a few, and best to get them out before you get a flat. 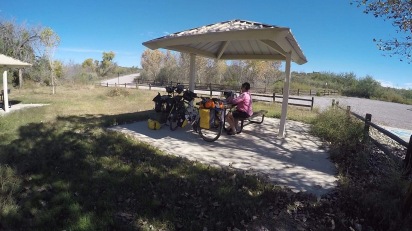 Great little lunch spot. We even had a clean toilet to use. Fantastic. These little bbq’s are what they use in the states, we have seen them all over the place.

We rode past a billion pecan trees. Pecan trees are native to North America. There are 14 states that grow them commercially, New Mexico and Texas being number two and three in production, producing around 130 million pounds between them.

There was also a hell of a lot of cotton. USA is the third biggest cotton grower in the world, and Texas grows the most here. Did you know that cotton is a fibre, food and feed crop? About two thirds of the harvested crop is seed, which is crushed for cottonseed oil, meal and hulls. The oil is used in cooking, and processed foods like crackers and chips, and the meal and hulls fed to livestock. We all know it makes good fabric.

The rest of the ride to Las Cruces, was uneventful, and aside from the wind picking up, and the traffic consolidating, it was pretty darn good. After a stop at Walmart, to stock up on groceries, we pedalled over to the Super 8 Motel, which we had prebooked, as it was bloody cheap. It ended up being fantastic value, with a clean, modern, room, included continental breakfast, all for less than $60 Aussie. Somehow, the Hotels.com system had booked us two rooms, but the receptionist fixed it all up, hassle free, and made sure we had a ground floor room, with easy access for our bikes. No complaints, here!

Some strange things occurred during our morning, nothing involving us, but when we departed, there were two police cars in the Motel car park. Hmmm, best we move on quickly, hey? It was an easy City to cycle through, and out of, and we had no issues.

Lots of small communities along the route, all involved in growing one or more of the usual, cotton, chilli and pecans. Great architecture, and beautiful churches. We rode these backroads, then found ourselves in Texas, without a sign. Just a local sign telling us the state road authority no longer cared for the road. Wow. Everything looked the same. We stopped at Family Dollar, and got a Snickers and Gatorade, before getting on the Rio Grande cycle trail. It was fantastic. Somewhere along the way, we stopped for a restful lunch break, in the riverbed. 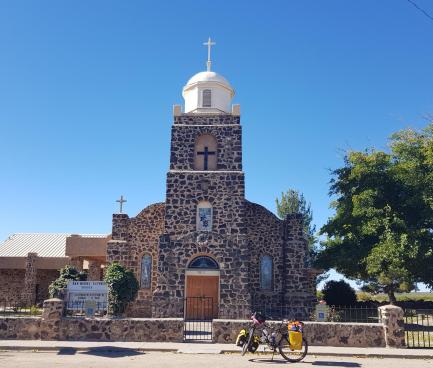 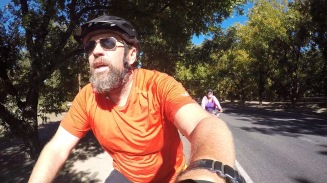 At lunch, we decided that we’d had enough for the day, and done above the required kilometres (whatever that is), we found a motel about 10 kilometres down the trail, and directed ourselves to it. 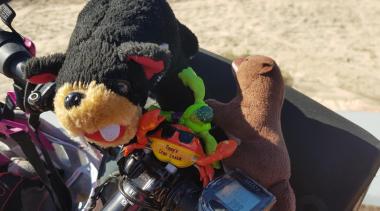 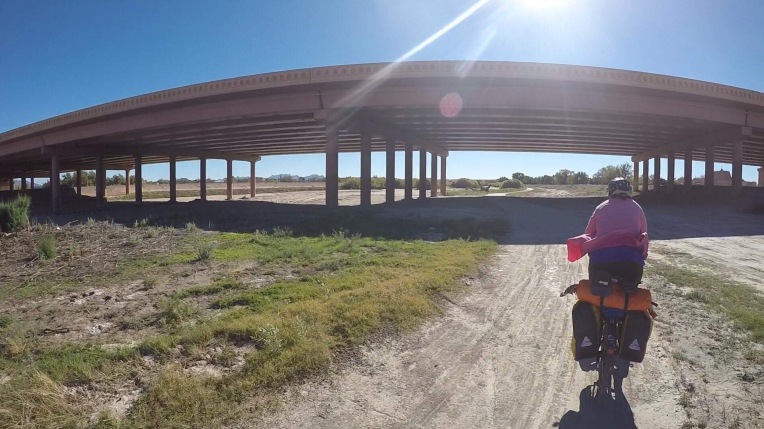 Great spot for a relaxing lunch break, and the mascots got out for a play. The cycle trail was mostly paved, with a couple of dirt patches. They’d obviously had some flooding recently, with dirt washed over some of the paved sections. It was very pleasant to ride along. We even saw a coyote.

El Paso is a rather large city, and spreads quite a distance along the Rio Grande. The river serves as the border for Mexico, Texas, and New Mexico. Being north of the city centre, it would mean getting through the big centre on leaving, but for today we have had enough, and again have covered enough kilometres. On our way to the cheap motel sector, we spotted a liquor store, and decided we’d stop for some supplies to save backtracking. While Will was in shopping, I was on guard duty (my preferred position), when a man pulled up in a run down old bomb of a car, and grabbed my attention. When I turned around, I was astounded that I actually recognised him. Alex Chacōn, has a YouTube Chanel, that we have spent many hours watching. Check it out, he is pretty bloody good.

So we chatted to him, which was awesome, and then we loaded our grog, rode a whole kilometre further, to find our super cheap motel. Unfortunately, we had a room on the second floor, BUT, they had an elevator which fit our bikes in, one at a time. So for bugger all, we had a good room, walked next door for a good dinner of steak, broccoli and green beans, and then slept really well. The usual continental breakfast is included too.

2 thoughts on “We Cross The Rio Grande.”