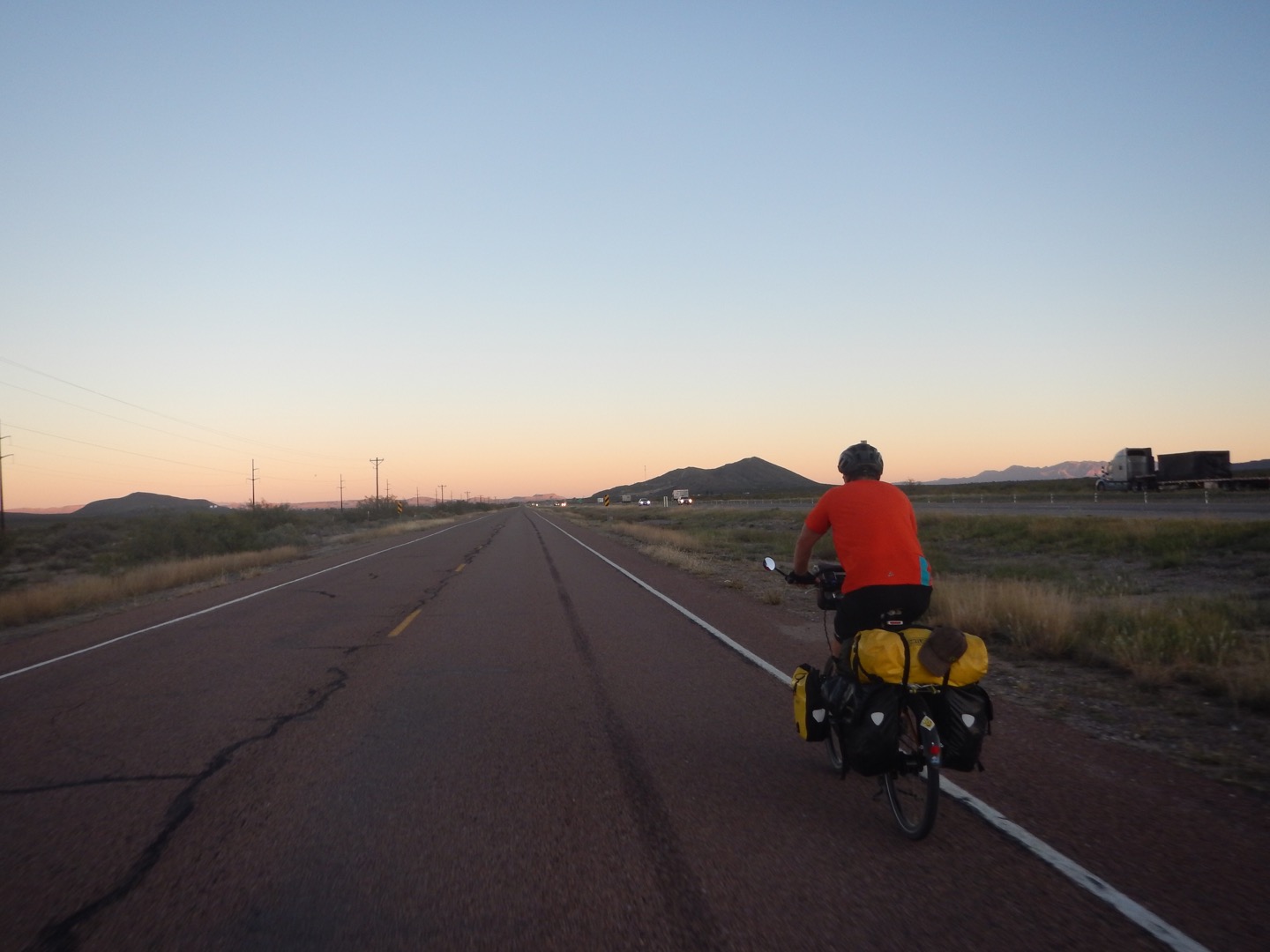 Continental breakfast was nothing unusual, but we smashed it pretty hard, to make sure we had the energy needed to get out of the city today. We had a couple of different options for today, because you just never know how hard it might be getting through a city. Today, it wasn’t so much difficult, than just busy. We got around the bottom of the main centre, and onto highway 20, heading south reasonably simply. We took a big rest at a Starbucks, before continuing, as it was a lot of stop, starting, and with the traffic, you have to stay sharp. It’s tiring. 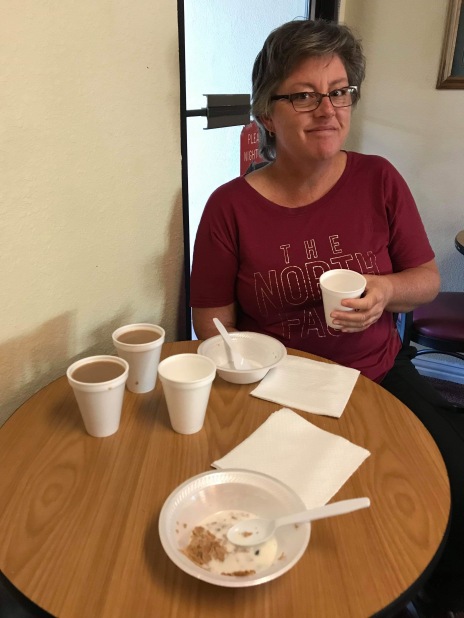 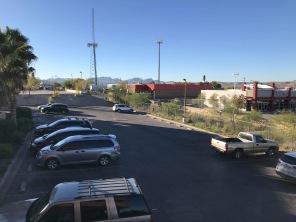 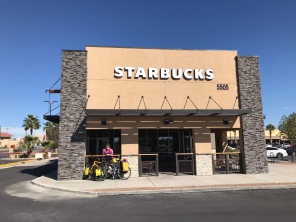 It doesn’t look like much, but it was pretty good. All the hotels use all this foam crap. Why? Why? Why? So much rubbish and waste. Starbucks isn’t a favourite, we prefer non chain stores, but it was there, and we needed a break. Also has good wifi. Average coffee! 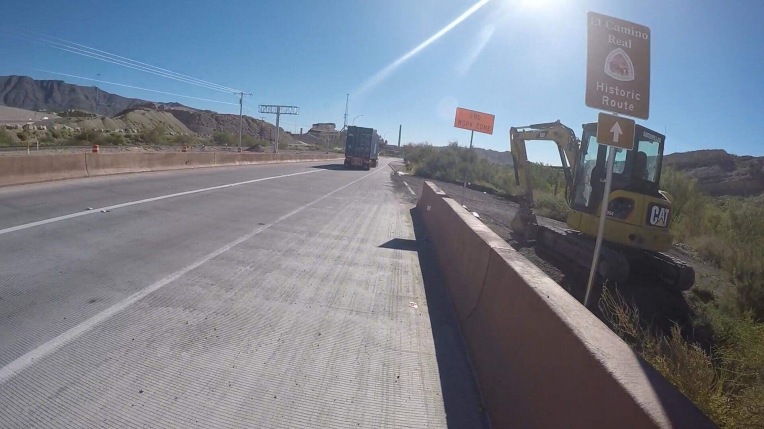 Highway 85, also known as El Camino Real, was busy, but not ridiculous. The shoulder was good, and the traffic was accommodating. 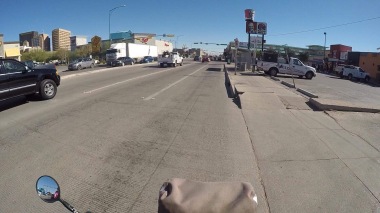 The 85, ran into the 62, along the border fence, and around the bottom (south) of the city. We rode through it, and stopped so Madame Google and Davo could discuss routes. 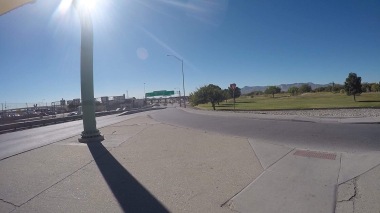 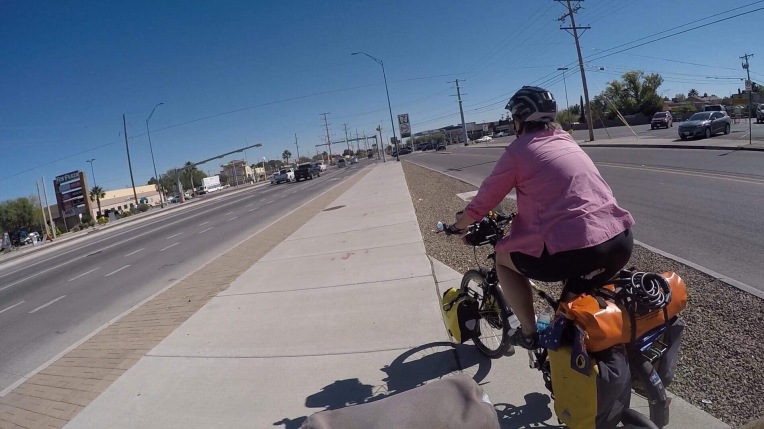 Across a bridge, check out the border crossing, which cured us of considering a crossing, then onto highway 20. Aah, at last.

Now we were on the road south, we thought it would be simple. It’s flat, and straight. But El Paso goes on forever. Highway 20 just seemed to be a continuous car yard. Dotted with Auto Repairers, and parts shops, but just wall to wall car sales. I don’t know how they manage to stay afloat, as there are so many old bomb cars driving around, it doesn’t look like anyone fixes their cars, or gets new ones. So it took a lot out of us, with plenty of racing the traffic at the traffic lights, and getting up to speed, just to cop another red light. Ugh, very frustrating.

When we finally broke free of the city, we were back to cotton fields, and less traffic. We stopped at a Dollar General for a Gatorade and a packet of chips, and decided we’d take the shorter option of Fabens. There is one Motel there, so we’ll make our way there. The traffic lights had worn us out, and we’d had enough for the day. Just means a bigger day tomorrow. 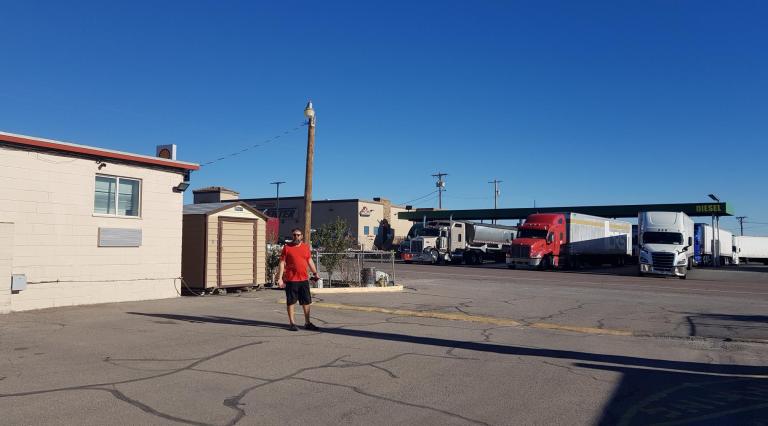 Look at all those trucks? A noisy night coming up, I guess. Lucky we travel with earplugs.

Both of us had a pretty good sleep, and the truck stop didn’t keep us up at all. We got up and going fairly early, making a quick stop at the grocery store for lunch supplies. It was a nice cool morning, and we rolled back into town, then back onto highway 20. Nice flat, quiet roads today, with not much between us and Sierra Blanca. We had a very slight tailwind too.

Rolling along on the bumpy, chipseal road, we were just pedalling, and enjoying the day, when a couple of bored pooches, decided to give chase. They were a bit half hearted, and a good shout at them, was all we needed to do, to stop them. Then just around the corner, we spotted a couple of bicycles. Unloaded, and looking very suspicious. As we rode by, we waved and mentioned the dogs, and two very illegal looking faces, smiled and waved back at us. They had just walked out of the bushes with a backpack. Good luck guys, stay hidden.

Our only other town today was Fort Hancock, where we stopped for lunch. The little grocery store in the middle of town, didn’t have much, but a couple of gatorades and bananas. We smashed those down, then rode back to a run down old pizzeria, that had tables for us to sit at while we made some lunch. Not the nicest looking town, but it is right on the border. In fact you can see the “Wall” from here. 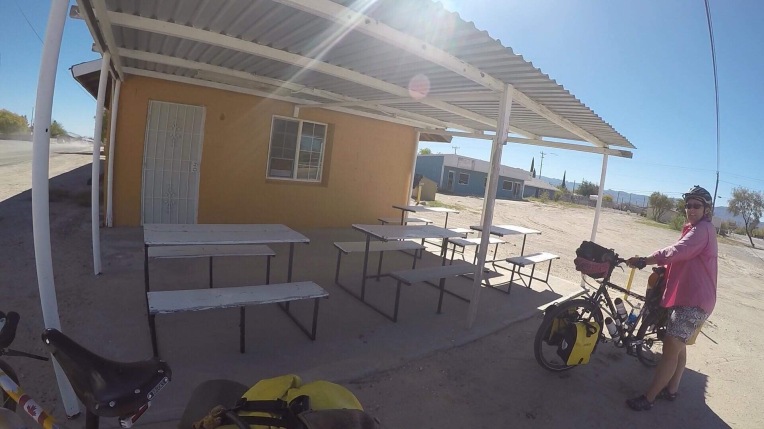 Not much still going in these little towns. Tiny grocery store, closed down pizza shop, and lots of delapidated buildings. Guess what we had for lunch?

Leaving town, we experienced our second serious, dog chase. A couple of wandering farm dogs decided we were catchable, and gave chase. The first line of defence (shouting at them to go home) only stunned them for a second, so we pulled out the water canons (our valuable drinking water) and blasted them. This was effective, and they stopped, confused. Bloody hell, two dog attacks in one morning.

Highway 20 joined the Interstate, so ACA maps, take us on some more farming backroads, through a place called Esperanza. It isn’t so much as a place, but a few large farms, and a couple of run down old homes. It was quiet, and we started going up a bit. No dramas, and we knew we had to go up for about 20kms, but not before a quick rest break at the Roadie. Both of us were feeling okay, and although we had ridden about 80kms, so far, and had 30 more to go, we felt it was manageable. 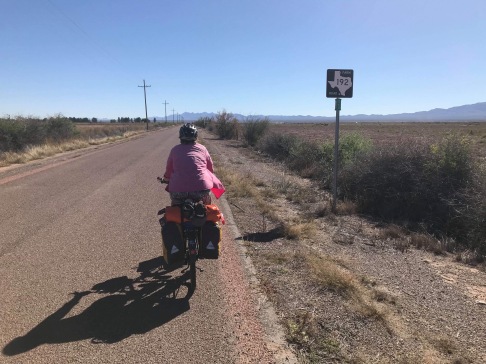 It was like playing highway lotto, look at all these numbers. But, backroads are always better.

So onto the I-10 we go, but only for a few kays, then off onto a quiet frontage road. I actually think it is the old highway, and will take us into Sierra Blanca. Not long after we reached the side road, we were greeted, energetically and over enthusiastically, by a large German Shepard. At first, he was just barking, wagging his tail, and strutting along beside us. It didn’t take long before he was getting way too close, baring his enormous teeth. The shouting, the water canons, nothing seemed to stop him. Unfortunately, I was using Will as a shield, and kept my wheels turning. Will had to stop and use his bike as a shield, until the calming pig came out. I’m not kidding. A medium sized black and white pig came out, and wagged it’s little curly tail, and the dog calmed down enough for Will to ride off and catch up with me. Phew, what is this shit? Texas crazy dog 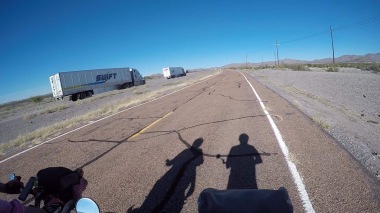 The frontage road was bumpy, it is chipseal, so a little tiring, but no traffic is a good thing. Sometimes you get such good insights from graffiti. 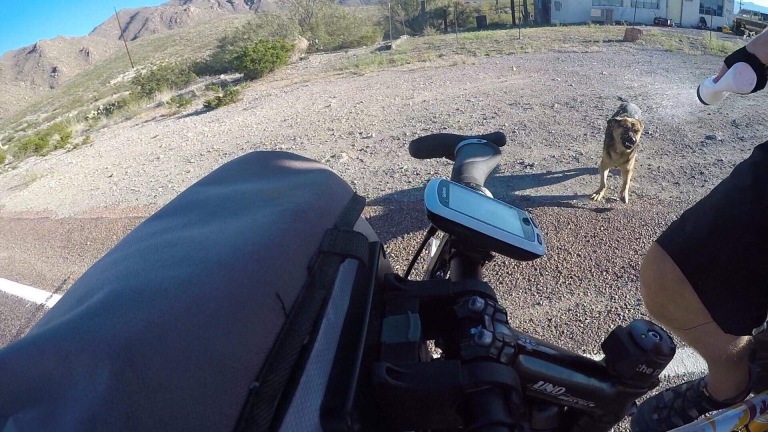 At the top of the elevation gain, we paused for a quick snack, and a drink, at a very nice rest stop. The sun was going down, not slowly, and we had a twelve Kay slight decline into town. All this was on a frontage road, so we were able to push it, without worrying too much about cars and other traffic. We sped past the Border Control station, where the cars had to stop, but they didn’t pay us any attention. It was cooling off, and we were running out of steam, when we rolled into town, and located the Motel Americana Inn. A shining light of happiness. Hot showers, and unloading the bikes, then we rode around to the only restaurant in town, Delphinas. We thought we were on time, but we are almost in another time zone, so our phones and things were confused, telling us different times, depending on where we were in town. Luckily, Gladys and the crew were extremely lovely, and served us a very delicious Mexican dinner, and even gave Will a beer from her personal stash. What a day! Oh, I forgot to mention the last dog attack, which wasn’t even half hearted, in town. So four dog attacks in one day. Crazy.

It was a nice little rest stop, we ate some cheese and crackers, a banana, and skulled some water. Ready to get there now. 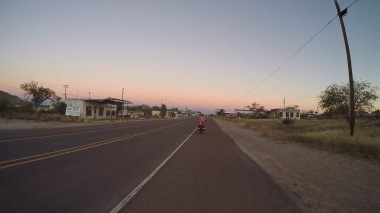 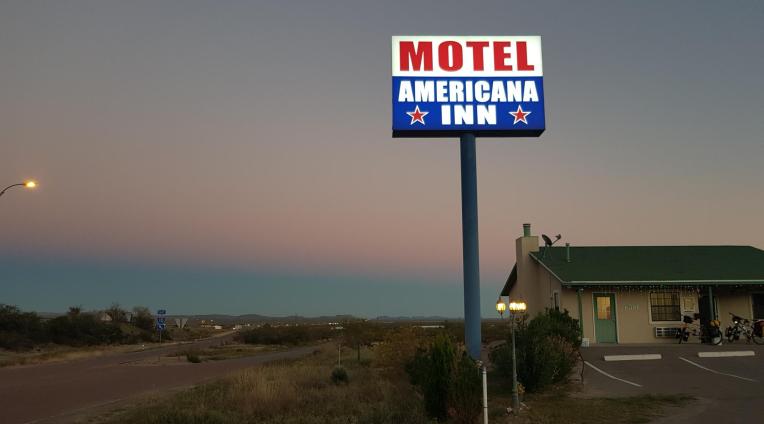 Getting cold, sore butt, darkness chasing us, and then…..aahuh, a room at the Inn!